Regulators often have warned about the risks to consumers of exposure to bitcoin and other crypto currencies. But it did little to curb enthusiasm.

In spite of the cautions, the authorities inadvertently may have contributed to investors piling in by embracing blockchain as a safer form of ledger and talking up the possibility of central bank crypto.

Instead of drawing a line in the sand, Wall Street and other markets allowed crypto instruments – including exchange traded funds (ETFs) and initial public offerings (IPOs) – to proliferate. 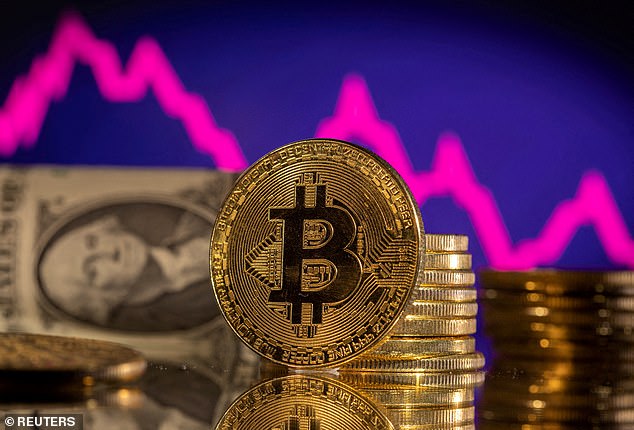 Crypto crisis: Crypto market capitalisation has plummeted from a peak of £2.4 trillion (roughly the size of the UK economy) last year to about £700bn in latest trading

Basketball fanatics, tuning into the NBA final between Golden State Warriors (the winners) and Boston Celtics last week, were still being bombarded with ads for Crypto.com, endorsed by star Joel Embiid, even as the global price for bitcoin was in freefall.

This was a little like promoting Northern Rock 110 per cent mortgages in the ad breaks on FA Cup Final day as the market for sub-prime mortgages was imploding in 2007-08.

Crypto market capitalisation has plummeted from a peak of £2.4 trillion (roughly the size of the UK economy) last year to about £700billion in latest trading.

On its way down, bitcoin is dragging companies providing crypto-services and funds into a bad place.

Among those feeling the pain are crypto hedge fund Three Arrows Capital, Asia-based crypto lender Babel Finance and US lender Celsius. Shares of ‘secure’ crypto trading platform Coinbase have plunged some 80 per cent since the start of the year.

Turbulence has raised fears of a cascade of bankruptcies of the kind seen at the start of the financial crisis. The big difference is that then, the losses to consumers were largely insured in markets where savers could reclaim their deposits. The implosion now is in the unregulated Wild West.

Bitcoin is proving an unsafe haven for difficult times. It has been dropping like a stone as inflation soars and interest rates hiked.

The unanswered question is whether the crypto meltdown will be confined to the fringes of the financial system or attack the underpinnings?

Among potential fissures is the fact that many investors have bought crypto on margin which means as the price falls, brokers demand more cash to cover the losses.

With some 45 per cent of crypto investors estimated to be under water there must be disquiet that shortfalls will spread from the fringe to mainstream lenders.

The Aussie-American boss of Morgan Stanley James Gorman, in London last year, left no doubt he was a crypto sceptic suggesting that bitcoin is all but worthless.

Not all financial firms have necessarily been as astringent in their approach.

The best that can be said about the EasyJet decision to slash its flight schedule this summer is that it is facing up to the realities of staff shortages across the industry before the schools start breaking up.

That will not be much comfort to customers stranded or those of us who booked our flights well in advance and cannot be assured that they are going to take-off.

What it does tell us is that EasyJet boss Johan Lundgren should not have been so over-ambitious when planning post-pandemic flight schedules.

The constant chopping and changing does reputational damage to a carrier which has sought to position itself a cut above the other no-frills airlines.

Similarly, the likelihood of further losses, after running up a £2.2billion deficit in the pandemic, will not be inspiring shareholder confidence. If there is a silver lining in this (before someone shouts ‘Brexit’ from the side lines), it is that this is not just a Gatwick event.

In spite of multiple runways, Schiphol in the Netherlands is similarly short of air traffic controllers, and Paris – infamous for its high season frolics – similarly disrupted.

Britain could improve matters if only HMRC pulled its finger out on processing new staff recruits.

When it opened its first American store in Boston in 2015 it did so cautiously, recognising how many British retailers have failed in their US ambition.

It is being similarly sensible online, well aware that its margins don’t allow for costly packaging, delivery and returns.

Having upgraded its website, it is starting out modestly with ‘click and collect’ for apparel for children in 25 stores across the North West. If that works, expect a broader rollout. Eat your heart out, under-pressure Asos and Boohoo.

Free summer camp fun for children who fled the war... thanks to Mail Force

How to invest in fine wine: Experts’ tips on what you need to know

How to get a house deposit faster: Could you save £27k?

Record day for property sales and Rightmove traffic has surged