Ascential shares dived on Monday after the firm plunged to a loss, despite growth across all segments of the business.

Having recovered to a profit of £216.8million in the six months ending June last year, the London-based media company posted a £38.4million loss this time around.

Ascential shares plunged by 11.8 per cent to 257.6p by the late afternoon, making it the second-biggest faller on the FTSE 250. 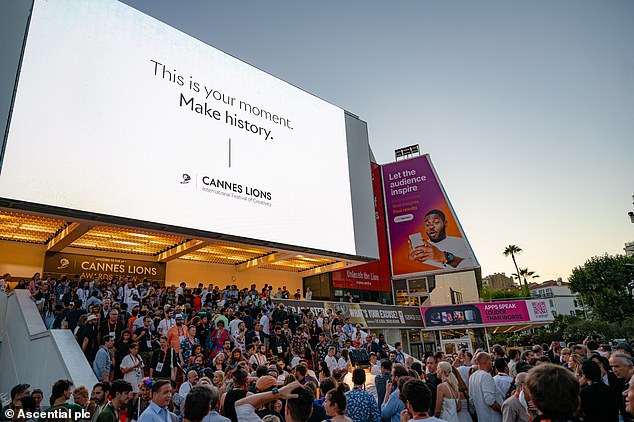 Revival: The return of people to the creative arts festival Cannes Lions boosted revenues in Ascential’s marketing division by 88 per cent to £80.8million

It blamed economic uncertainty, the decision by Amazon to move Prime Day to July and supply chain pressures exacerbated by severe lockdown restrictions in Shanghai for hitting trade in its digital commerce division.

Total sales within the segment still increased by 59 per cent to £95.1million, but margins were held back by a one-off £31.4million impairment charge related to its Edge Digital Shelf analytics platform.

Margins were also stretched by investment outpacing revenue growth after the group bought software developer Sellics and e-commerce services provider Intrepid as part of plans to expand its reach in Europe, the US and Southeast Asia.

Nonetheless, chief executive Duncan Painter hailed the firm’s results, with double-digit percentage sales rises across all divisions and profits in line with forecasts, which he said were ‘all the more pleasing given the challenging macro backdrop’.

Both events were cancelled in 2020 following the emergence of the Covid-19 pandemic and the subsequent regulations on cross-border travel and in-person events implemented by governments.

Their respective stagings this year were extremely popular, with both witnessing their turnover and earnings exceed pre-pandemic levels.

Cannes Lions helped to boost revenue in Ascential’s marketing arm by 88 per cent to £80.8million, as did a healthy jump in digital subscriptions in the advertising services business WARC.

Further growth was observed in the firm’s product design division, where demand for non-fashion goods from industries such as beauty and consumer technology, drove record expansion in turnover and customer retention volumes.

Analysts at Berenberg said the company’s trading update should be ‘taken positively given weakness seen across many e-commerce platforms of late raising concerns over its outlook.’

They added: ‘All divisions are performing well on the top line, with digital commerce clearly taking market share and the recovery in events revenue very strong also.’

Bosses at Ascential expect sales and margins within its digital commerce arm to improve in the second half, bolstered by Amazon Prime Day and the easing of lockdown restrictions in Shanghai.

Rising numbers of women start to profit from investing