As a Waspi (Women Against State Pension Inequality) woman who has had her state pension delayed by six years, I finally qualify this month.

Even though I have 40 qualifying years of National Insurance contributions, I didn’t really expect the full pension of £179.60 per week because I have been contracted out of state top-up schemes while working for local government and the NHS.

But I was shocked that the final amount was just £157.90 per week — £1,128.40 per year less than a full pension. I asked for a breakdown — and the problems started. Over the past few months, I’ve talked to the DWP, Future Pension Centre and HMRC 14 times. 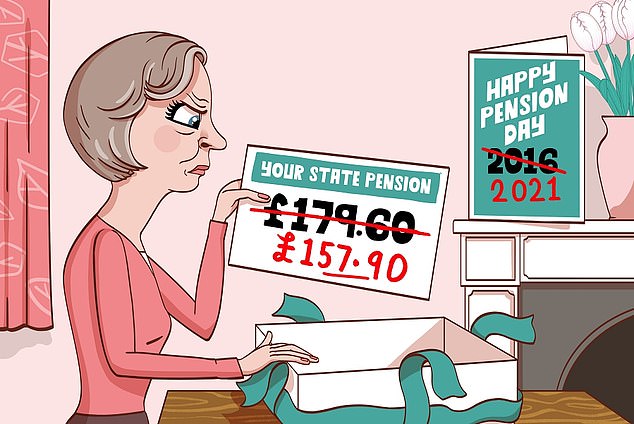 Short changed: Despite making 40 years of NI contributions and waiting an extra six years, one reader is receiving £1,128.40 per year less than a full pension

I know I can buy some extra years via NI contributions. But I do not want to make payments that may not improve my pension.

Tony Hazell replies: In attempting to simplify the state pension in 2016, the Government created a numerical nightmare for those caught in the changeover.

The headline fact is that you need 35 qualifying years of full National Insurance contributions to get the full new state pension.

The key words are the ‘fulls’. Most people paid less so get less pension, resulting in confusion, disappointment and not a little anger.

Here’s why. Before April 2016 many people were opted out of state top-ups (known variously as Serps, state second pension and graduated retirement benefit) and into an employer’s pension for at least part of their career.

They paid a lower rate of NI, which is now translating into a smaller state pension.

Incidentally, if the triple lock had been maintained, women in their late 70s would have seen average pensions rise to £144 per week — but men with six-figure salaries and big private pensions decided this would be too much.

This makes it essential to plug any gaps. But this is complex, and some people have paid top-ups which made no difference to their pension. DWP then told them that this was their own fault.

Your own question was straightforward and someone should have been able to answer it without you being given the run around. But DWP has finally confirmed what you already suspected.

You retired on your NHS pension at age 60 in 2015, but it is only worth making voluntary contributions for the missed years since April 2016. Any before that would fall under the old regime and disappear into a black hole.

Four of these years would buy you an extra £5.13 per week of pension each, but the fifth would buy £1.18 per week as you’d hit the maximum weekly pension.

You’ve decided not to buy the final year, but even paying the £795.60 it would cost for the £1.18 per week income is a decent deal. This is equivalent to almost 8 pc, which knocks commercial annuity rates into a cocked hat.

As things stand, your pension will be £178.42 per week once you have made the four payments.

Over the next 20 years you could get almost £28,000 of extra pension for your £3,182.40 investment, assuming future governments retain the pledge to increase pensions by at least 2.5 per cent a year.

An important point to make: employer pension had to be at least equivalent to the state pension lost through contracting out — so no one should be worse off from doing this.

When I applied to cash in his Premium Bonds, I sent NS&I my son’s original death certificate as requested. Then it asked for a letter from a notary in Thailand.

After many months of trying to get help from people in Thailand, I have been told the fee would be nearly as much as the value of the Premium Bond.

Why do some organisations make things so difficult for bereaved relatives? They may be seeking to prevent fraud, but surely this can be done without creating obstacles, expense and stress for bereaved people?

In this case, it seems that NS&I’s customer team misread its rules on fraud prevention.

Apparently, NS&I requires a death certificate and a statement from a lawyer/advocate or notary public confirming that payment of monies to the claimant is correct in the laws of the country if the holding is more than £1,000.

In this case, the holding was exactly £1,000 so that evidence was not needed. But those considering living abroad should think about this obstacle when investing.

NS&I’s customer team has phoned you to apologise for its error and has made the payment. It has also added £100 as a goodwill gesture.

You tell me your son’s bonds also won two £25 prizes and you received a cheque in the post last week.

Spotlight on lampshades: Bolder is better when selecting lighting