It’s not just in fairy-tales that Cinderella goes to the ball.

The launch of BMW’s new fastback all-electric i4 coupe has been overshadowed somewhat by that of the big new flagship iX SUV, which has garnered much of the recent attention.

But despite being initially overlooked, the new i4, like ‘Cinders’, has proved a surprisingly eye-catching and alluring companion that has captured the hearts of many would-be Prince Charmings, including, dare I say, myself. 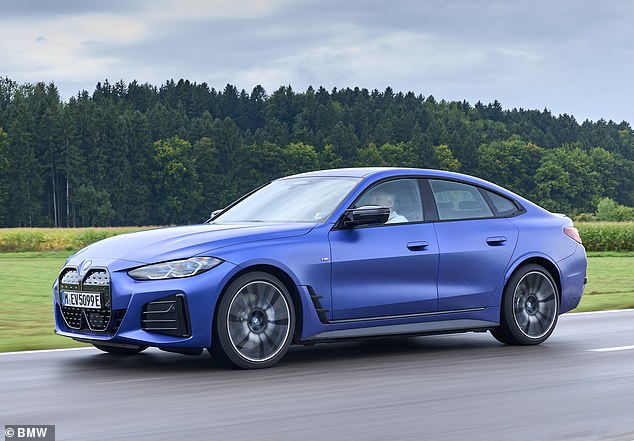 Is the i4 the Cinderella model in BMW’s EV range? Overshadowed by the ugly sister iX SUV, the i4 might be the plug-in Beemer Britons should be choosing instead

That’s not to say that the big iX SUV is a brash ‘ugly stepsister’. Far from it, though the large grille does still divide opinion.

But the stylish new i4 really does surprise and delight with some elegantly spirited performance.

I’ve been driving it out in BMW’s homeland in Bavaria, South West Germany, ahead of first deliveries arriving in the UK from December – just in time for Christmas.

I drove the top of the range i4 M50 – the first purely electric car from BMW’s motorsport-focused M division.

Priced from £63,905 and with electric motors on both axles and riding on larger 19 inch wheels, it develops a hefty 544 horse-power that propels this handsome looking ‘gran coupe’ with gusto from rest to 62mph in just 3.9 seconds, up to a top speed limited at 140mph. 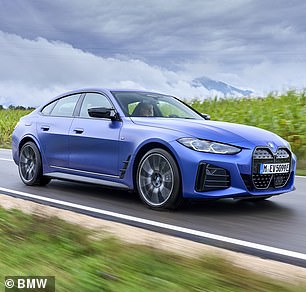 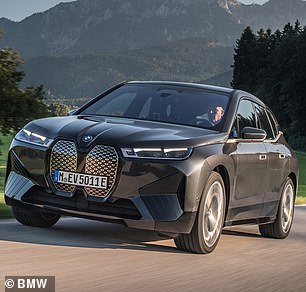 Ray Massey has been driving the i4 in BMW’s homeland in Bavaria, South West Germany, ahead of first deliveries arriving by the end of the year. Can it emerge from the iX SUV’s (right) shadow? 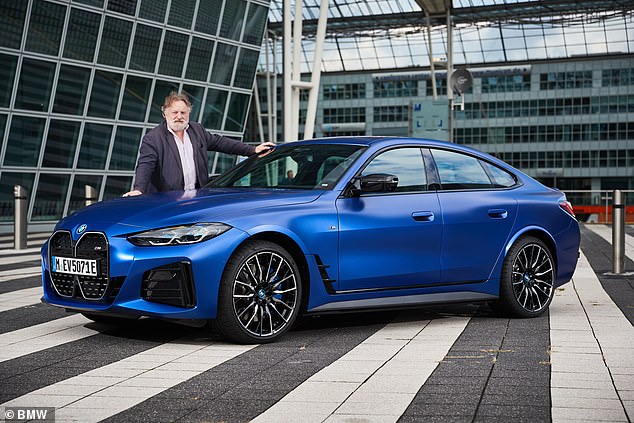 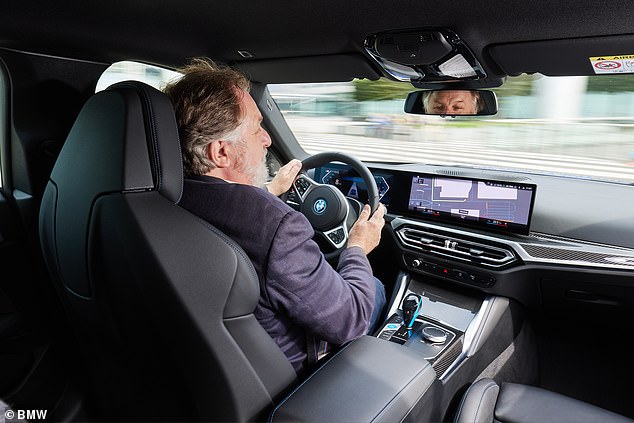 Comfortable cossetting sports seats mean you are securely held for the energising ride. It very much put me in mind of an American muscle car – but without the gas-guzzling engine or loud raucous noise.

For this battery-powered beauty is zero-emissions.

If you’re missing the sound, for accompaniment you can opt for a specially composed ‘soundtrack’ created by Oscar-winning Hollywood composer Hans Zimmer, which gives a rising crescendo ‘electrified’ sound in place of the familiar engine noise. I like it, though it will be a personal choice.

The feisty and engaging ride and handling matches the i4’s sporty silhouette. Yet it will cruise silently and gracefully through towns and small villages, and is very easy to live with. 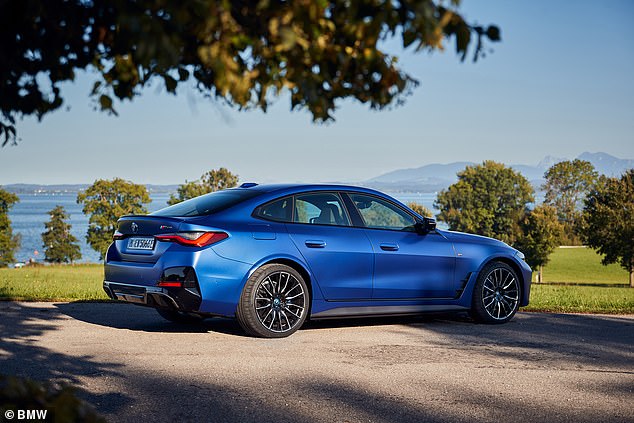 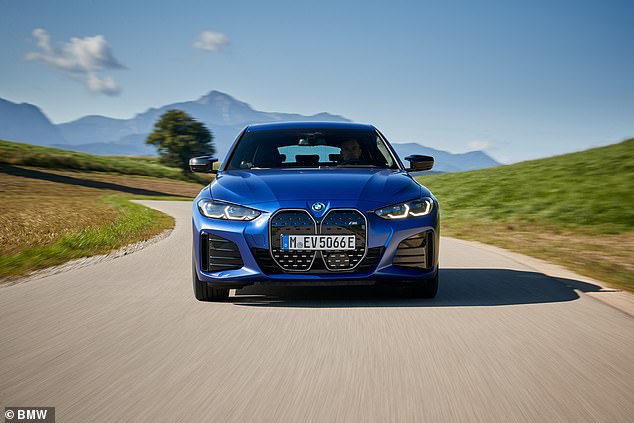 If you’re missing the sound, for accompaniment you can opt for a specially composed ‘soundtrack’ created by Oscar-winning Hollywood composer Hans Zimmer 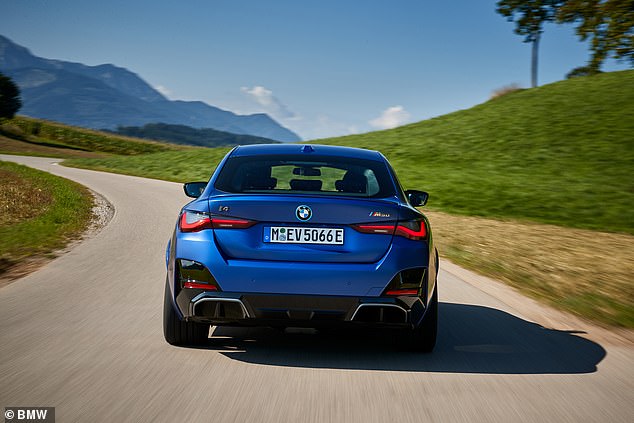 The fetching paint colour on my car, exotically name ‘Frozen Potimao Blue’, fitted perfectly and was enhanced by the black grille.

It’s got a pretty tight turning circle of just over 12 metres and a smart, functional, minimalist interior, dominated by a wide digital screen. Perfect for tootling around areas with limited space for manoeuvre.

On German autobahns it’s a real bahn-stormer – with that super-swift acceleration coming into its own both to overtake and to get neatly and quickly out of the way of potential problems.

And on winding mountain roads it’s goat-like nimbleness combined with sure-footedness is a joy.

The official range of 318 miles will get you from London to Newcastle – though with the energetic driving style that the i4 invites from its driver, I suspect that is more theoretical than practical.

Nevertheless, after a full day’s driving from Munich – where the car is built – to the Bavarian Alps, I arrived at my destination refreshed and invigorated, and a little disappointed at having to hand it back. I really had some fun.

My i4 M50 is one of three cars in the line-up coming to the UK from December – but accounts for more than half the orders placed so far.

Both of these rear-wheel drive variants develop 340 horse-power which propels them from rest to 62mph in 5.7 seconds up to a top speed of 118mph, but with a longer range of up to 365miles.

My i4 M50 test car had a fair few performance and cosmetic enhancements. It was riding on larger 19′ M light alloy wheels.

I was shielded by sun protection glass and my seating and ride comfort was aided by electric memory seats, M seat belts, and an M Sport Leather steering wheel. 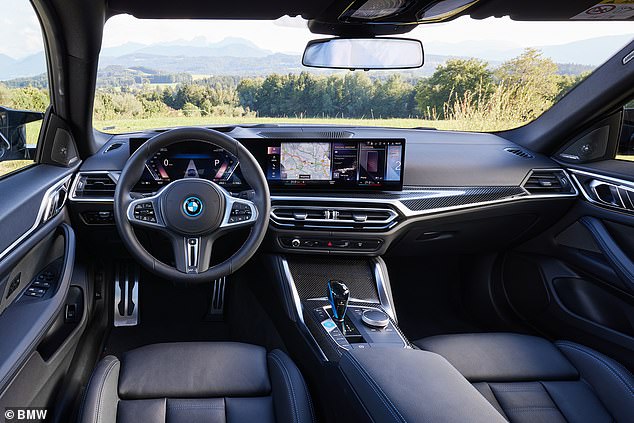 Comfortable cossetting sports seats mean you are securely held for the energising ride. It very much put me in mind of an American muscle car – but without the gas-guzzling engine or loud raucous noise 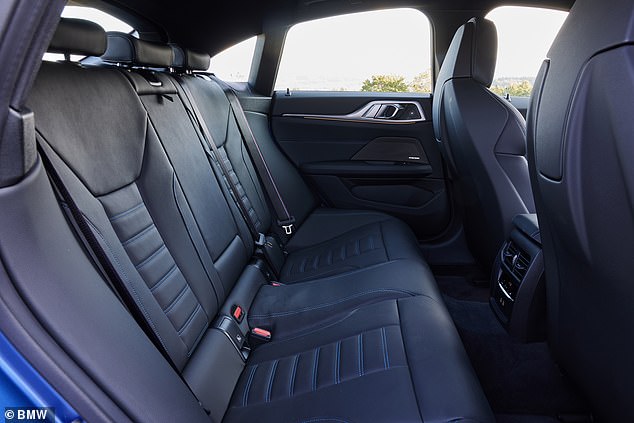 The sloped roof design means there’s less rear headroom than a conventional saloon car, but it should be spacious enough for smaller children

This grand cruiser with plenty of pizazz really does deserve to come from under the shadow of the bigger sibling iX SUV and have a chance to shine in the spotlight.

For having met my BMW Cinderella, I really did have a Ball – oh yes I did – and can confirm: ‘The shoe fits.’ 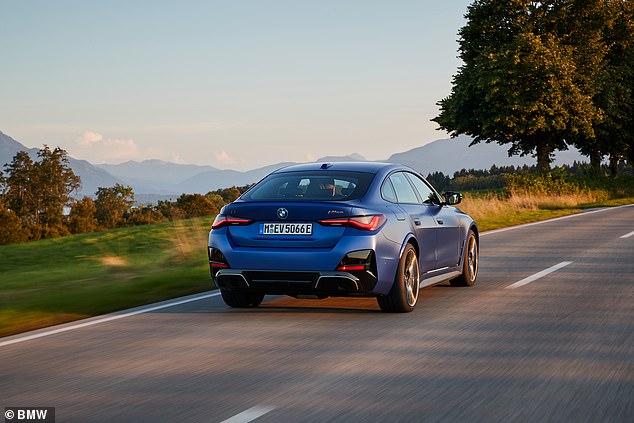 The i4 offers 470 litres of boot space with the rear backrests upright (left) or 1,290 litres when the back seats are folded all the way down (right)

Coinbase one step closer to going public on US stock exchange

How a ‘green’ home could cut cost of your mortgage