The economy is ‘running on empty’ as fears grow over a global recession, experts warned yesterday.

Businesses are the gloomiest they have been about their growth prospects since May 2020, according to data provider S&P Global. At the same time, activity in the manufacturing sector is at a 23-month low.

The slowdown is echoed around the world – fuelling fears of a global slump as inflation soars and interest rates rise. 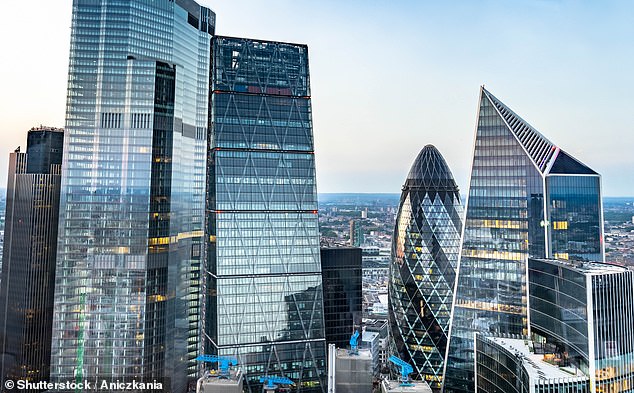 Slowing: UK companies are now the most gloomy they have been about their growth prospects since May 2020, according to data provider S&P Global

US factories reported their first drop in output for two years, as the cost-of-living crisis bites.

And high prices in the eurozone meant demand for manufactured goods fell at the fastest rate since May 2020 during the depths of the Covid crisis.

Back in the UK, customer demand was ‘subdued’, according to S&P, as red-hot inflation caused businesses and consumers to tighten their purse-strings.

Chris Williamson, chief business economist at S&P Global Market Intelligence, said: ‘The economy is starting to look like it is running on empty.

Current business growth is being supported by orders placed in prior months as companies report a near-stalling of demand.

‘Manufacturers in particular are struggling with falling orders, especially for exports, and the service sector is already seeing signs of the recent growth spurt from pent-up pandemic demand move into reverse amid the rising cost of living.’

Such low levels of confidence have ‘in the past typically signalled an imminent recession’, Williamson added.

The pound, which has already tumbled around 9 per cent against the dollar so far this year, fell back below $1.22 before paring its losses.

Rising prices around the world, prompted by Russia’s invasion of Ukraine and supply chain chaos caused by Covid, are taking their toll on economies which were only just recovering from Covid pandemic lockdowns.

Jack Allen-Reynolds, at Capital Economics, said the data from the eurozone ‘showed a further slowdown in the services sector, while output in the manufacturing sector now seems to be falling outright’.

But with prices still rising, he added: ‘The eurozone appears to have entered a period of stagflation’.

This is a worrying prospect for households, as it generally involves a period of lower unemployment and falling living standards.

Jerome Powell, chairman of America’s central bank the Federal Reserve, has acknowledged that a recession in the US is ‘certainly a possibility’.

There was some cause for optimism in the UK, as the services sector – which covers everything from restaurants to banking – remained ‘resilient’, according to S&P.

But S&P added that many services businesses ‘also cited growth headwinds from the cost-of-living crisis and heightened economic uncertainty’.

And separate figures from data firm GfK signalled that the resilience may not last for long, as consumer confidence in June fell to its lowest level since records began in 1974.

Beat the rush and invest in Bounceback Britain