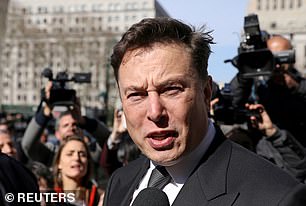 Billionaire Elon Musk is trying to drag Goldman Sachs and JP Morgan Chase into his bitter legal feud with Twitter. The Tesla chief executive is looking to grill the Wall Street giants over how they advised the social media platform during his proposed £37bn takeover.

Subpoenas have been sent to the two banks, which could disclose revealing messages between Twitter and its advisers.

Musk specifically wants details over the banks’ analysis of Twitter’s financials as well as correspondence about the merger.

He is trying to back out of a deal for Twitter, saying it failed to uphold its side of the merger agreement by not disclosing enough information on fake accounts. However, the company is suing to force him to complete the deal, with its lawyers having accused the him of ‘attempted sabotage’.

If he fails in his bid to back out of the deal, Musk will have to pay Twitter a substantial settlement or even buy it at $54.20 per share. A fast-tracked trial between the two is set for October.

Is the emergence of ‘pump and dump’ groups evidence the US stock market is topping out?

Was the Coinbase listing bitcoin and crypto’s coming of age? TiM podcast