Pensions are often neglected in divorce settlements despite their value to both partners.

What happens to the shared home is typically prioritised, for immediate practical reasons, especially if a couple has children.

Yet, there is growing recognition of the importance of pensions as an joint asset in a marriage. 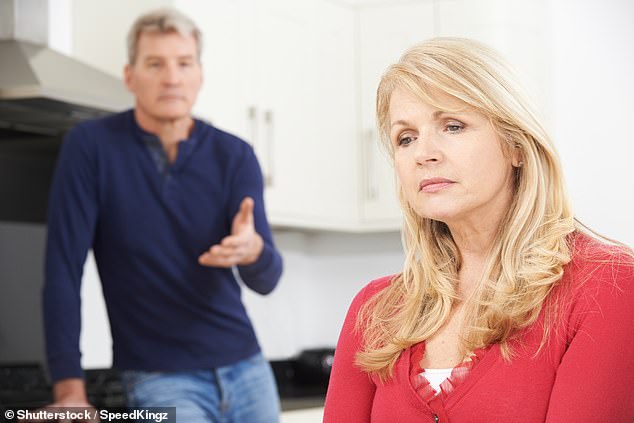 Getting divorced? Find out how to avoid the worst pitfalls when dividing pensions

‘Pensions are increasingly a major issue in divorce but for the growing number of older couples getting divorced private pensions are often the most valuable asset after the family home,’ says lawyer Francesca Davey, of law firm Nockolds.

However, she warns: ‘With more people undertaking DIY divorces online, the chances of making a mistake in relation to pensions is increasing.

‘Couples going through divorce can place undue emphasis on the house and overlook the other spouse’s pension pot.

‘This can be financially disastrous for someone with little or no retirement provision. If a spouse has built up even a modest final salary pension scheme there is a good chance that it will be worth considerably more than the average UK house.’

Experts say there are three main options when dealing with pensions in a divorce – sharing them on a clean break basis, one partner earmarking some of the income to be paid to an ex-spouse after retirement, and offsetting their value against other assets.

We look at the pros and cons of each below, and run through some further tips on what to do and how to avoid the worst pitfalls when dividing pensions.

A pension is split into two separate pots straight away on divorce. Each ex-spouse walks away with a share, which they control themselves from then onwards.

This enables a clean break and ensures neither of the couple is left in the worst possible position when it comes to building a retirement income, says Sarah Coles, senior personal finance analyst at financial services firm Hargreaves Lansdown.

But she says the cons are that it can be relatively complicated, and requires a pension sharing order from the court, which will establish how the pension should be split.

‘It may make sense to get financial advice to improve your chances of securing a fair split. You may also need more advice if the pension needs to be transferred, and in rebuilding your retirement savings. This will come at a cost,’ says Coles.

‘It leaves both partners with work to do in order to rebuild their pension.’

Francesca Davey, senior associate at Nockolds, says: ‘The benefit of a pension sharing order is that the fund is immediately divided between the spouses, meaning the applicant knows what is going into their pension pot now and can plan ahead.

‘People need to think carefully about whether a pension attachment or a pension sharing order is the most appropriate remedy.’

A percentage of someone’s future pension income and retirement lump sum is paid to their ex-spouse when they start taking their pension.

Coles says this enables the pension to be shared, so nobody needs to start from scratch, but it needs to be ordered by the court which comes at a cost.

‘It’s not a clean break, because it’s essentially maintenance paid from the pension. All the tax is paid by the person taking the pension – even when part of the income is received by their ex,’ she says.

‘The person who doesn’t have the pension has no control over when they receive the benefits – so their ex can delay taking it.

‘They can also stop paying into that pension and build up savings elsewhere. And when they die, the pension payments will stop to their ex.’

Davey warns: ‘In many cases a pension attachment order may not be the most appropriate remedy. This is because the order does not prevent a person from transferring money out of their pension or oblige them to continue paying in, so unless the pension is already in drawdown, it can be ineffective.

‘A pension attachment order is risky unless the pension is already in drawdown and it is important to look at exactly what benefits the pension type offers to avoid losing out by choosing the wrong option.’

A pension is retained by the holder and its value is traded off against that of other joint assets.

‘It’s a relatively straightforward way to secure a clean break,’ says Coles. ‘It can enable one half of the couple to remain in the family home.’

But she adds: ‘Whoever trades away their right to a pension will have a mountain to climb when it comes to building a decent income for retirement.’

What else should you consider?

‘What can be divided depends on where in the UK you are divorcing,’ says Menna Cule, financial planner at wealth manager Brewin Dolphin.

‘In England, Wales and Northern Ireland the total value of the pensions you have each built up is taken into account, excluding the basic state pension.

‘In Scotland, only the value of the pensions you have both built up during your marriage or civil partnership is considered. Normally, anything built up before you married or after your “date of separation” does not count.’

Not understanding the value of what you have is a trap for people splitting up, says Coles.

‘The divorce process involves dividing your assets, so you need to understand the value of it all. Couples often offset assets, but it’s important to appreciate the value of what you are giving up and possibly speaking to a financial adviser.

‘There are a few options to consider, so you need to be certain you choose the best one for your circumstances.’

Ben Glassman, a partner and the head of family and divorce at wealth manager Tilney Smith & Williamson, says it’s important to get financial as well as legal advice at the outset, not wait until after a divorce settlement is agreed.

‘The divorce process can be confrontational but also nuanced. There are many opportunities for conflict, mistrust and misunderstanding and so it is important to have the right team supporting each party.

‘Independent financial assessments can benefit both the divorcing parties and achieve clarity around the real value of the couple’s matrimonial estate.

‘Involving a financial planner early on means that they can help shape the divorce settlement to achieve an optimal outcome for the long-term.

‘In particular, the gut reaction is often to hang on to the family home, but this may not always make financial sense, especially when there are other sizeable assets to consider such as pensions.’

Couples who split up assets and will be on separate incomes after a divorce should consider the tax consequences, and whether they need help from an accountant, financial adviser or planner.

This is especially the case if a large pension is involved, which approaches or is over the lifetime allowance, currently £1,073,100.

This is the maximum in retirement savings you can build up over a lifetime and continue to benefit from pension tax relief.

Going over the limit can attract charges, but there are various protections against these, which are complicated.

‘Additional caution is needed for those getting divorced. Transitional protection affects both the debited and credited member and in certain circumstances can lead to the loss of tax protection altogether,’ says Glassman.

‘Understanding the interactions of these protections at divorce and the strategies that can mitigate potential tax charges can result in significant savings for both parties.’

These are also important, especially for women who often have gaps in their career which could affect their state pension entitlement, says Glassman.

‘It’s important to obtain a projection, particularly when looking to equalise the pension entitlement of the two spouses. The value of a guaranteed income of nearly £9.500 from age 66 (currently) until death is not to be underestimated.’

‘You will have filled out an expression of wish form to say who you would like to receive your death benefits when you started your pension.

‘However, this may have been a long time ago and in the meantime, you may have divorced, separated or started a new relationship and so the person named on the forms may not be the person you want to benefit.

‘While administrators/trustees may have discretion in some cases to award death benefits to someone other than who is named on the form, sometimes they don’t. It’s best to make sure these are updated regularly to make sure your wishes are considered should the worst happen.’

Married and hoping you will never get a divorce?

If you are married it’s best to build up both partners’ pensions in tandem and ensure they are both fully funded.

That way you enjoy the maximum benefit in retirement if you stay married, and are more likely to avoid a costly battle if you divorce.

‘Talk to your partner about their pension,’ says Becky O’Connor, head of pensions and savings at Interactive Investor.

‘The couple that plans together, parties in retirement together. What’s in your partner’s pot? How will you plan your joint finances when you are retired and potentially drawing an income from different sources?

‘Have you got joint plans for different pots? What are your joint priorities for retirement? Travel? Leaving a big inheritance? An open dialogue between couples can make managing retirement finances much easier.’ Read more of O’Connor’s pension tips here.

Meanwhile, if you do get divorced and both partners’ pensions are already a similar size, much of the difficulty – and hostility – involved in dividing them can be avoided.

The 10 car modifications that could mean costlier insurance

ALEX BRUMMER: Miners take a rare bow thanks to demand from China