The company anticipates its revenue surging by 24 per cent on a constant currency basis to $131million for 2021 compared to the previous year, whilst annual recurring revenue is set to jump by $25million to $144million.

Overall bookings are also predicted to climb by more than 25 per cent to $150million at the Danish firm, which went public last March amidst a boom in flotations of technology businesses on the London Stock Exchange. 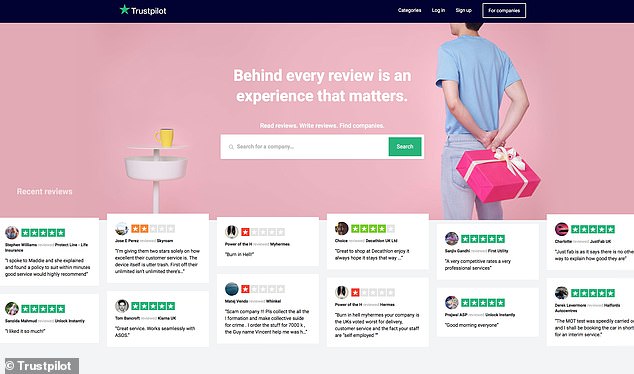 Raison d’etre: Trustpilot allows people to rate businesses for free and makes its money by receiving monthly fees from firms who want to show certain reviews on their homepage

When it debuted, Trustpilot raised around £473million by offering more than 160 million shares at 265p per share, giving it a valuation of about £1.1billion.

Founder and chief executive Peter Holten Mühlmann said that taking the company public was the ‘natural next step’ in supporting its expansion into new products and territories.

Started in 2007, Trustpilot allows consumers to rate businesses for free, and makes its money by receiving monthly fees from companies who want to show certain positive reviews on their homepage and monitor customer feedback.

Describing Trustpilot’s recent trading performance as ‘excellent,’ Mulmahnn added that the group had ‘made strong progress against our strategic ambitions for Trustpilot to be the most trusted and most used global consumer reviews platform’.

He added: ‘Through this, we are fast becoming a universal symbol of trust that inspires confidence in people and businesses, thus providing a real benefit to society.’ 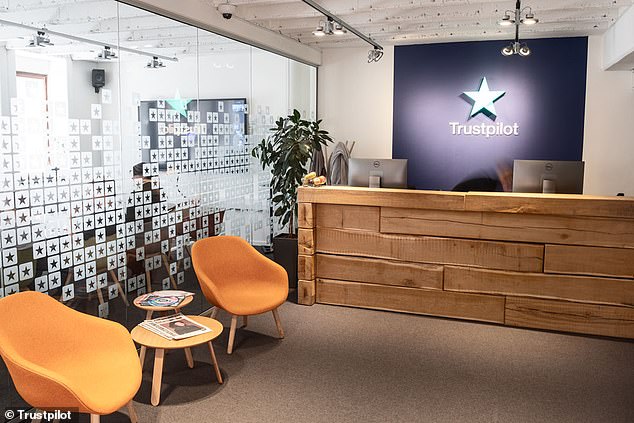 Public listing: When it debuted on the LSE, Trustpilot raised around £473million by offering more than 160 million shares at 265 per share each, giving it a valuation of about £1.1billion

The listing also provided a windfall for the firm’s venture capital backers, which include Skype and Deliveroo investor Index Ventures, Draper Esprit, and the private equity house Vitruvian Partners.

Trustpilot’s announcement arrives a day since cybersecurity specialist Darktrace saw its share price skyrocket by a quarter after it upgraded its annual sales guidance on growing demand for more secure IT services.

Darktrace also revealed that its customer base had climbed by almost 40 per cent, and its revenue had grown by half to £140million.

Dan Ridsdale, the managing director of technology media and telecoms at research firm Edison Group, noted that ‘UK technology IPOs have been receiving a bad press in recent months’.

However, he said that the combined trading updates from Trustpilot and DarkTrace are evidence that ‘there are good quality businesses coming to market who are delivering ahead of expectations’.

Ridsdale added: ‘Both are now trading ahead of their IPO price, despite share price slides over the last quarter and provide a good platform for appreciation from here.’