The United States on Thursday became the first country to declare a public health emergency over the monkeypox virus, the only thing is: America’s outbreak is four times smaller than the largest outbreak in Spain, with statistics showing that it has the eighth-highest case count per capita, official figures show.

The U.S. has detected the most monkeypox cases out of any country, with its total reaching 7,102 Thursday — more than a third higher than the 4,577 detected in the next highest country, Spain. But when this tally is considered per population — a more accurate measure because it takes into account America’s much larger head count — the U.S. ranks eighth, with 21 cases per million people.

That’s equivalent to one in 47,000 people having a confirmed infection to date. Conversely, in Spain, the number is 96 per million or one in 10,000, also higher than every American state.

Dr Jessica Justman, an infectious diseases expert at Columbia Mailman School of Public Health in New York City, said even though the U.S. was behind other nations the number of infections detected and nature of illness — with patients suffering painful lesions — meant it was right to declare an emergency. Hundreds of cases are still being detected daily in the U.S. whereas in other European countries — like the UK — the outbreak is now slowing down.

America moved to an emergency footing yesterday, two weeks after the World Health Organization also declared an international emergency over the outbreak. Justman added that other nations would likely follow suit, but said it was also possible they had not moved to this level of alert because of differences in how they operate.

Experts have warned it would be the ‘worst public health failure in modern times’ should monkeypox become entrenched in the United States because it ‘could have been prevented’. Unlike with Covid, accurate tests and effective vaccines were already readily available — but there has been a struggle to roll them out. 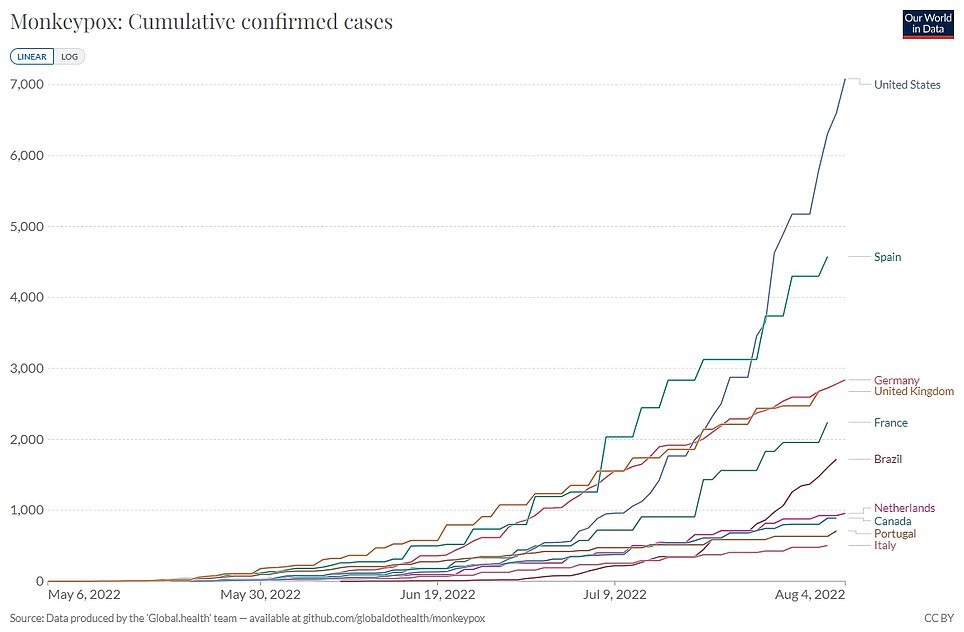 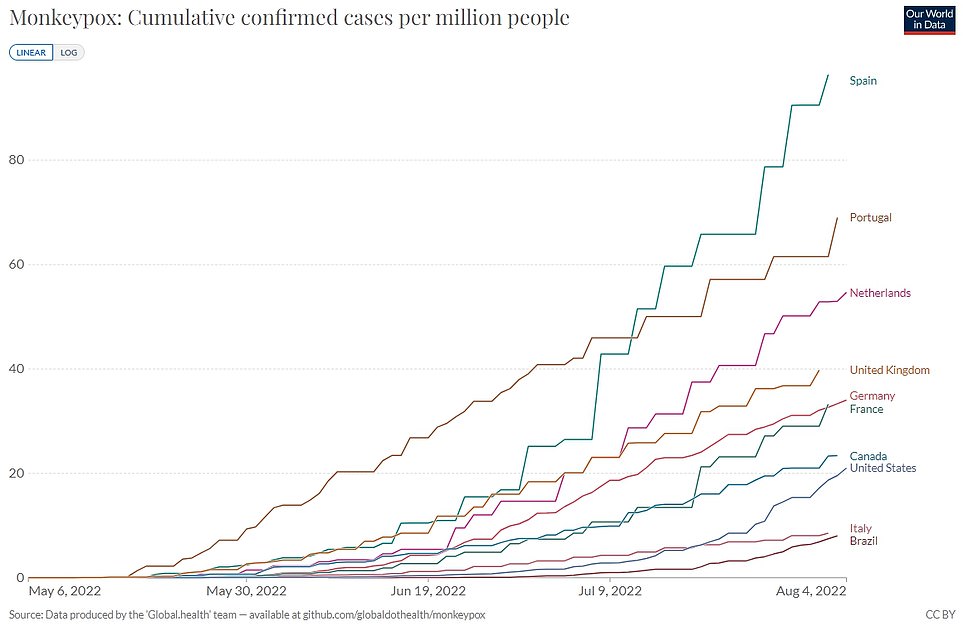 The above left panel shows the total monkeypox infections detected per country over time, and on the right it shows this as a rate of per million people. Experts said it was more accurate to consider the data in this way because it shows the difference in infections between nations. Figures are from OurWorldinData, a data platform run by experts at Oxford University 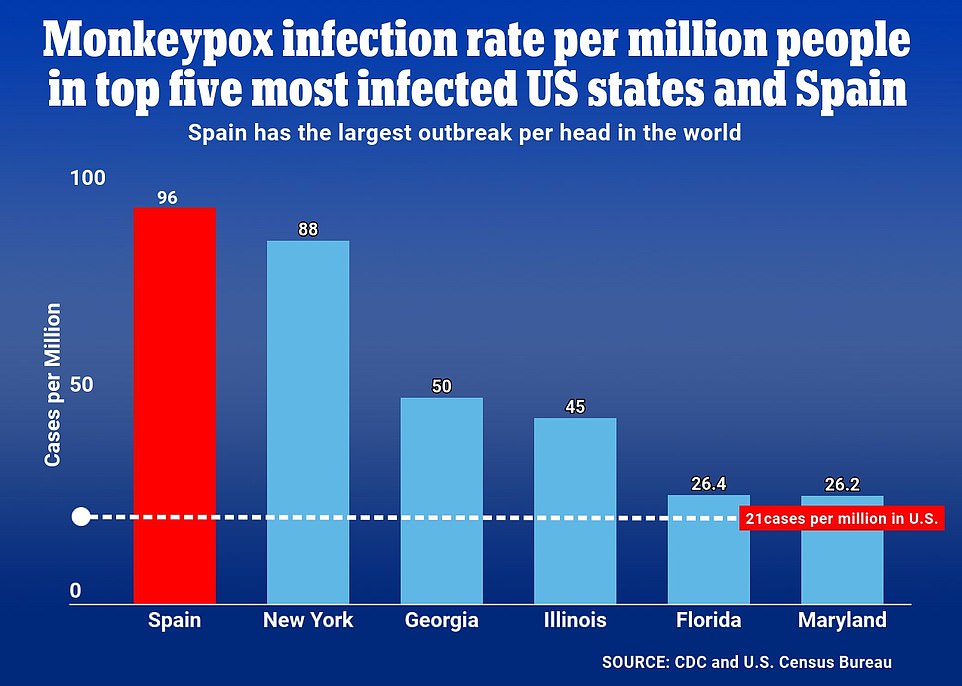 The above graph shows monkeypox cases per capita in Spain, which has the highest infection rate, and the five U.S. states with the highest rates of the virus — New York, Georgia, Illinois, Florida and Maryland. It also shows the infection rate for the whole United States (the dotted line) 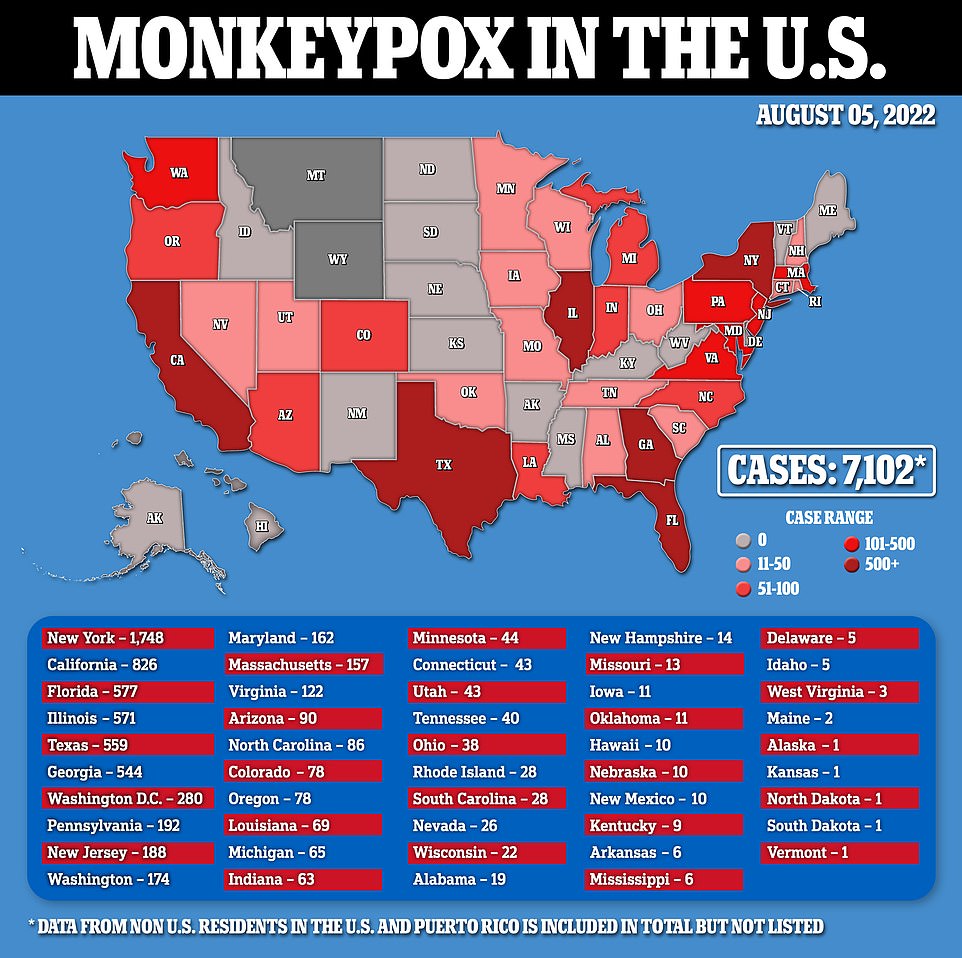 The above shows the number of cases per state, and each states tally. This data is not shown as a monkeypox infection rate per million people 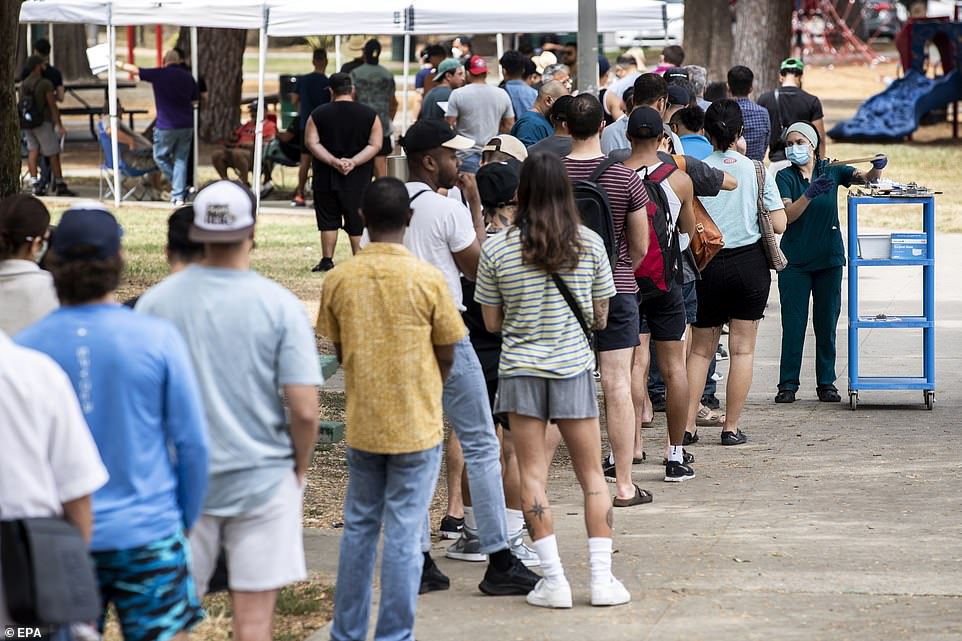 Pictured above are people lining up to get a first dose of the monkeypox vaccine at Obregon Park in Los Angeles, California

At the ground level, it shows Spain currently has the biggest monkeypox outbreak in the world per head with 96 cases per million people (one in 10,000).

Portugal has the second highest rate at 69 per million, followed by the Netherlands at 54 per million and the United Kingdom at 39 per million. Germany (34), France (33), and Canada (23) also have a higher tally than the US.

The EU is set to repeat its COVID vaccine shambles with a failure to deliver monkeypox jabs.

Doctors are having to turn away patients because of a lack of doses, with the bloc’s collective procurement policy stalling again.

While the UK has ordered more than 100,000 monkeypox vaccine doses, Eurocrats have procured just 160,000 for its 27 members.

Dr. Jean-Christophe Goffard, of the Erasme Hospital, in Brussels, said: ‘The vaccine is not available in Belgium at the moment.

‘We’ve had a growing demand for tests… and close to 90 per cent prove positive.

‘We don’t have the impression we are currently able to control the epidemic well.’

The EU’s two biggest powers, France and Germany, have turned their backs on the EU scheme and are buying their own vaccines.

Spain was one of the first countries to detect monkeypox in men who attended Pride festivals in May, and there are anecdotal reports that the virus may have been circulating in the country as early as February.

Both Spain and Portugal are yet to launch a mass vaccination drive for all gay or bisexual men — although this may be because both nations are struggling to get hold of adequate Jynneos doses from Bavarian Nordic, which is being used to treat the virus.

But in Europe there are now signs that some monkeypox outbreaks may be starting to run out of steam as health authorities get a grip on the outbreak.

In the UK, health authorities there say cases are now beginning to ‘plateau’. They recorded 299 new infections over the past seven days, drawing level with the 261 infections detected the previous week.

This is not the case in the United States, however, since which is now recording about 439 cases a day on average compared to just 224 two weeks ago.

No clear data was available on testing rates, but if other countries are testing less this suggests their outbreaks may be outpacing the U.S. even further. America can currently carry out about 10,000 tests a day for monkeypox, but only about a tenth of these are being utilized.

Asked whether the U.S. was right to shift to an emergency footing, Justman said: ‘I think this is a situation that does require mobilization of resources of recruitment and access.

‘Is it a response that has been done with careful thinking, and we should not dismiss this because it happens to primarily effect a smaller segment of the population.’

She added: ‘I am glad that the U.S. is declaring an emergency, that is a good thing.’

There is no sign of other countries following suit. For example, in the UK monkeypox was only ever designated a level two outbreak — reserved for transmission within a defined sub-population. This is two markers off level four or the highest level of alert, when there is evidence of wider community transmission of the virus.

Breaking down America’s figures into states also shows that none have a higher infection rate for monkeypox than that reported in Spain.

Compared to their European counterparts, New York, California (which ranks 10th out of US states) and Illinois have each already declared emergencies over the outbreak of the virus and started rolling out vaccines to gay or bisexual men.

At a press conference Thursday, Dr. Rochelle Walensky, director of the CDC, admitted officials were still not sure to what extent the cases they were detecting represented new spread or historic cases that were only now being picked up thanks to ramped up testing.

But cases have risen by several hundred every day for the past few weeks, with the virus now being detected in every state except Montana and Wyoming — which are both very rural. Last week officials warned the tally would likely continue to rise for weeks.

Monkeypox is a serious disease that triggers flu-like symptoms in the early stages before patients develop a rash that will spread across almost all of the body. It is not like COVID, being spread via physical touch alone.

Almost every case has been identified in men with the vast majority identifying as gay or bisexual to date in America. But there are fears that it will spill over into other groups that are more at risk of serious disease. 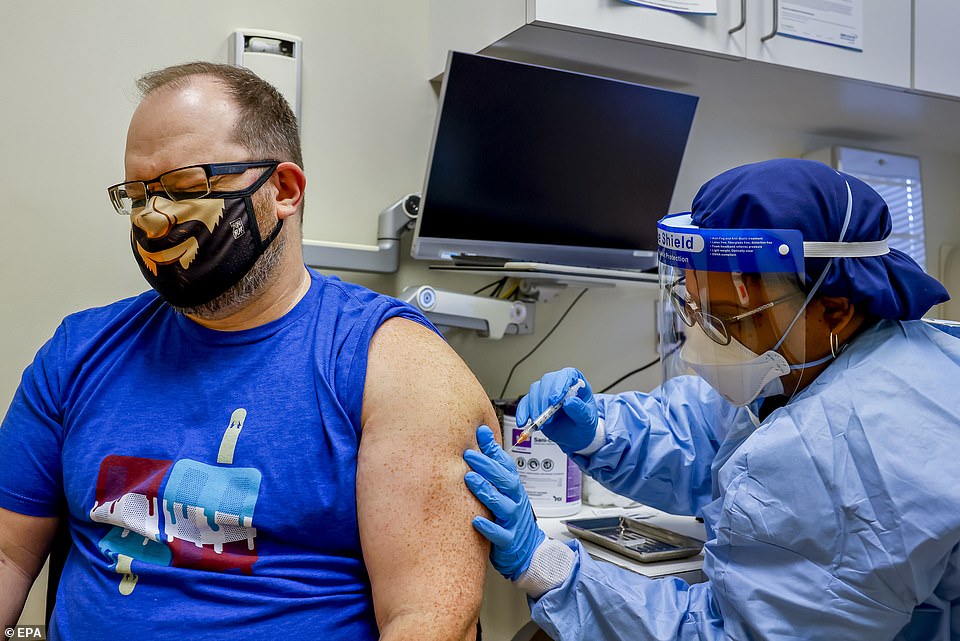 Pictured is a man receiving his first dose of the monkeypox vaccine at Dekalb County Board of Health in Atlanta, Georgia. Second doses are being delayed in many areas because of a lack of supply 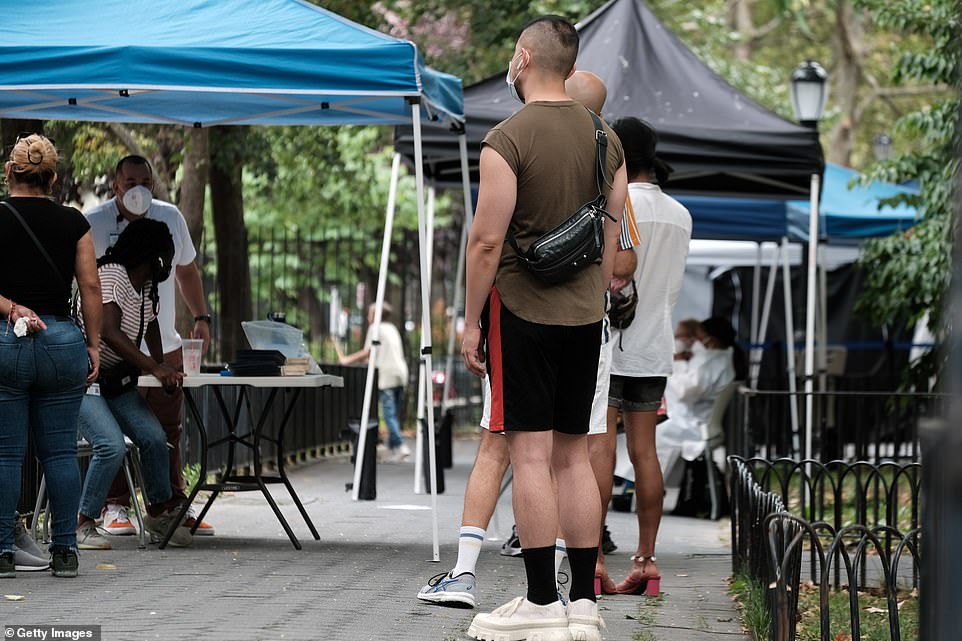 Pictured above are men waiting to receive a first dose of the monkeypox vaccine in New York City. It is at the center of the nation’s outbreak of the virus

At least five cases have been spotted in children so far — two in California, two in Indiana and one traveling through Washington, D.C. — who likely caught the virus from ‘household contacts’ and one case in a pregnant woman. Both groups are more at risk of serious illness.

Declaring the emergency yesterday, Secretary of the Department of Health and Human Resources Dr. Xavier Becerra said: ‘In light of all of these developments and the evolving circumstances on the ground, I want to make an announcement today that i will be declaring a public health emergency on monkeypox.

‘We are prepared to take our response to the next level in addressing this virus and we urge every American to take monkeypox seriously and to take responsibility to help us tackle this virus.’

The declaration will make more resources available for states, allow for federal officials being deployed nationwide and enhance data collection on cases, hospitalizations and testing.

Federal officials have been slammed for a delayed response to the virus so far, allowing it to potentially spread unrestricted for weeks before expanding access to testing and rolling out vaccines to the population. At current, the country can perform up to 80,000 monkeypox tests each week.

Blind people could one day see with high-tech glasses (which have the backing of Stevie Wonder!)

FDA bans the sale of Juul e-cigarettes in the US