COVID-19 cases among children in America are continuing to fall as the Delta-fueled summer surge reaches its end.

Data from the American Academy of Pediatrics (AAP) show that 148,222 children tested positive for Covid during the week that ended on October 7.

That is a 14 percent decrease from the 173,469 who contracted the virus the previous week and a 40 percent decline from the record-high of 251,781 the week that ended September 2.

Cases among kids have now decreased for five consecutive weeks.

Last week was the first week since early August in which weekly Covid cases among under-18s dropped below 150,000 in a single week.

Covid deaths among children remain consistent, though, with 22 children succumbing to the virus last week – equal to the week before.

While the raw number of cases among children falls, so does the share of total cases that they make up.

Last week, children made up 24.8 percent of active Covid cases, a low since August 12 and drop from the 26.7 percent of cases they accounted for the week prior.

Just over 16 percent of overall cases during the pandemic have been detected among children.

A majority of these cases have been clustered in the South, though the Covid-plagued region has seen youth cases drastically fall in recent weeks.

The South still accounts for more youth Covid cases than any other region, though cases have dropped by 60% over the last month, accounting for most of the overall decrease 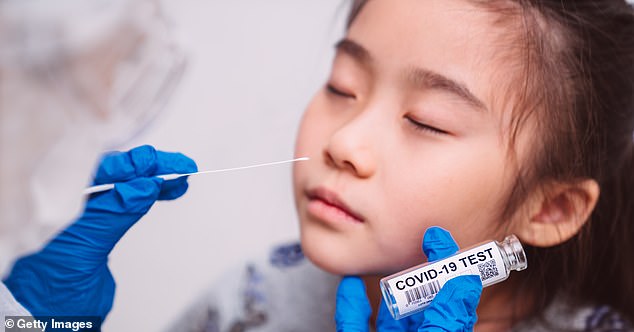 COVID-19 cases in children rarely result in serious infection or death, with minors accounting for 2.5% of hospitalizations and less than 1% of deaths due to the virus (file photo)

The AAP reports that around 50,000 youth Covid cases were detected in the South last week, the most of any geographical region.

It is still far from where the region was only a month ago, with around 135,000 cases being recorded the week that ended September 9 – meaning infections have fallen 60 percent over the past month.

The large gap between the South and other regions has shrunk with around 45,000 cases being detected in the Midwest. 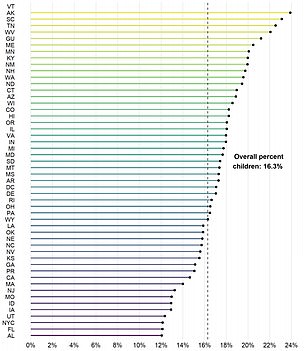 Children account for 16.3% of all cases since the COVID-19 pandemic began last year

Only weeks ago, the South was counting more than double the number of child Covid cases as any other region.

Some Southern states are also among the leaders in states where children have accounted for the largest share of Covid cases.

Four of five states – Arkansas, South Carolina, Tennessee and West Virginia – have seen kids account for more than 22 percent of all cases – with Vermont being the fifth state.

Alabama, Florida and Utah have recorded the lowest proportion of cases among children, all at just over 12 percent.

In total, 23,071 kids have been hospitalized due to the virus, with 615 during the week of the report.

Deaths among children remain relatively low, though, with 542 children recorded since the pandemic began, about 250 of which occurred after the Delta variant started rapidly spreading.

Children have never accounted for more than one percent of Covid deaths at any point during the pandemic. 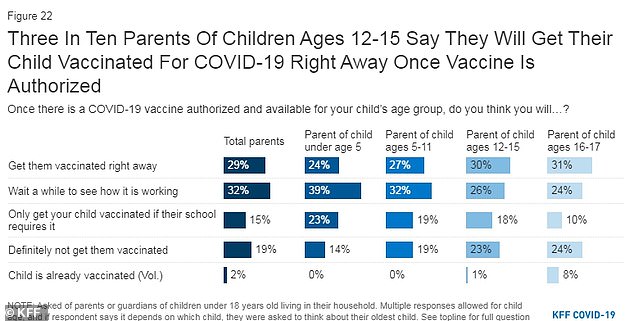 A poll conducted by the Kaiser Family Foundation that among parents of children aged five to 11, 19% said they only plan to vaccinate their children if their school requires it and another 19% said their child will definitely not be getting vaccinated

Some doctors have also suggested that kids do not needed to get vaccinated due to their low risk of severe disease and death.

In April 2021 poll, conducted by the Kaiser Family Foundation, parents were asked if they would get their child immunized once a COVID-19 vaccine is authorized and available for their child’s age group.

However, 40 percent of parents also said it was ‘unlikely’ that their children would be getting vaccinated

Covid US: Pfizer asks FDA to expand emergency use of vaccine to include children aged 12 to 15

Covid-19: People may choose to wear face masks in UK once rules end due to ‘cultural change’