The CDC is warning of a historic, highly deadly, outbreak of meningococcal disease affecting gay and bisexual men in Florida.

The Centers for Disease Control and Prevention (CDC) reports that 24 men have contracted the disease, resulting in at least six deaths, in what it describes as ‘one of the worst outbreaks of meningococcal disease among gay and bisexual men in U.S. history.’

Meningococcal disease, often the cause of meningitidis, is a rare but highly infectious condition that be spread either via a virus or bacteria. It infects a person’s brain and spinal chord.

While the CDC is recommending for gay and bisexual men to get vaccinated against the virus, one health expert tells DailyMail.com that even if someone gets jabbed now they will still not be safe from the disease in time for Pride festivities this weekend. 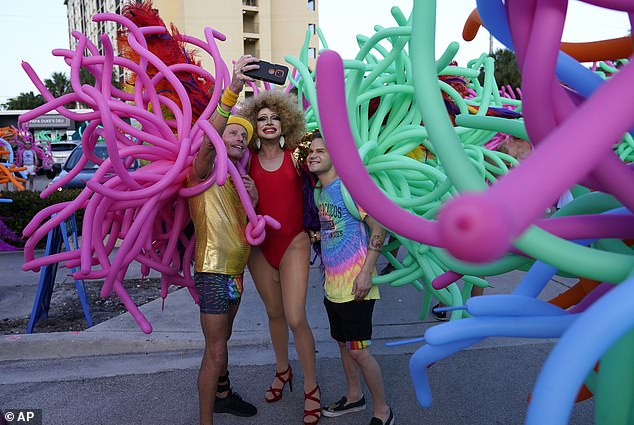 Ahead of the final weekend of Pride month, Florida officials and the CDC are warning of a ‘historic’ outbreak of meningococcal disease among gay and bisexual men in the Sunshine state. Pictured: Revelers take pictures at a Pride event on June 18 in Wilton Manors, Florida

It leaves the gay and bisexual community in Florida with another concern heading into a weekend of reveling, as monkeypox has also been found to be traveling through the demographic as well.

Officials have not revealed where in Florida the cases have been found, or if they are even all in the same region.

The time-frame in which they have been detected has not been confirmed either, but statements from officials indicate that they are relatively recent and are tied to Pride festivities.

‘Meningitis, by definition is an infection of the protective covering of the spinal cord. It can be caused by a number of different funguses, virus, and bacteria,’ Dr Jonathan Appelbaum, chair of the Department of Clinical Sciences at Florida State University, in the state’s capital of Tallahassee, told DailyMail.com. 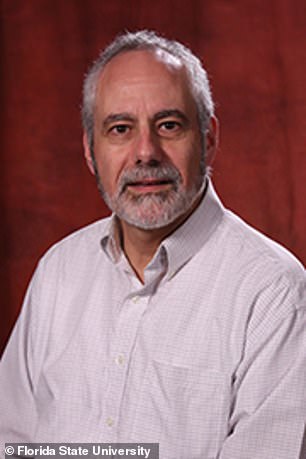 Dr Jonathan Appelbaum (pictured), chair of the Department of Clinical Sciences at Florida State University, recommends for gay and bisexual men to get vaccinated, but warns it is too late to be protected for this weekend’s festivities

He explained that the virus does not typically spread through sexual networks, making it an oddity that all cases were detected among gay and bisexual men.

The disease generally spreads via close contact, though similar to Covid it can spread via respiratory droplets.

It can be caused by either a viral or bacterial infection, and Appelbaum says the recent spate of cases in Florida is tied to bacterial transmission.

Many people are already to get vaccinated against the disease to either attend university or to join the military – but uptake outside of those groups is poor.

Exact figures for the amount of Americans vaccinated are not available, but the National Meningitis Association (NMA) says that many teens who are eligible for the shot have not received it.

The CDC is recommending gay and bisexual men who have not received the shot yet to do so to protect themselves going forward.

‘Getting vaccinated against meningococcal disease is the best way to prevent this serious illness, which can quickly become deadly,’ said Dr José R. Romero, director of the National Center for Immunization and Respiratory Diseases, said in a CDC statement.

‘Because of the outbreak in Florida, and the number of Pride events being held across the state in coming weeks, it’s important that gay and bisexual men who live in Florida get vaccinated, and those traveling to Florida talk to their healthcare provider about getting a MenACWY vaccine.’

Appelbaum insists they get jabbed as well, but warns that it takes time for the shots to activate in a person’s body – a person that get vaccinated now will not be protected in time for this week’s Pride festivities.

Massive pride celebrations are planned this weekend for the final weekend of June, with thousands expected to descend on beaches across the state.

Community leaders from around the world have issued warnings ahead of these festivities to protect from monkeypox, and in Florida it seems their may be another potential threat as well.

The organization also reports that 20 percent of teens have not received the vaccines, and that more than two-thirds who have gotten the jab are boosted as well.

Americans drink 109 bottles of wine or 366 pints of beer every year, report claims