One person has died and 11 have been hospitalized after catching Legionnaires’ disease linked to a cooling tower on the roof of a $400-a-night hotel in Napa Valley, California.

Health officials said three patients are still receiving treatment, with one on a ventilator. All are between 58 and 80 years old and had underlying conditions putting them at higher risk of severe disease.

They likely became infected after breathing in air containing droplets contaminated with bacteria that causes the disease. A cooling tower at Embassy Suites by Hilton hotel in the city center has been found to be contaminated and shut down. Officials say it is likely another source will be detected.

None of the patients were guests at the hotel, but neighbors, with officials saying the contaminated droplets likely spread up to a mile from the hotel.

Legionnaires’ disease is a serious lung infection that kills about 10 percent of people it infects. Sufferers face flu-like symptoms including a cough, fever and headache, which in serious cases progress to pneumonia. Cases have been rising in the U.S. in recent years, with this outbreak following another in the Bronx, New York.

Health officials said 11 patients were hospitalized with the disease, with one later dying. They likely became infected after breathing in air laden with droplets contaminated with bacteria that causes Legionnaires’ disease. A cooling tower on the roof of Embassy Suites by Hilton in Napa Valley, California (pictured) was found to be contaminated with the bacteria. It has been shut down, but health officials warn the disease could spread up to a mile from here 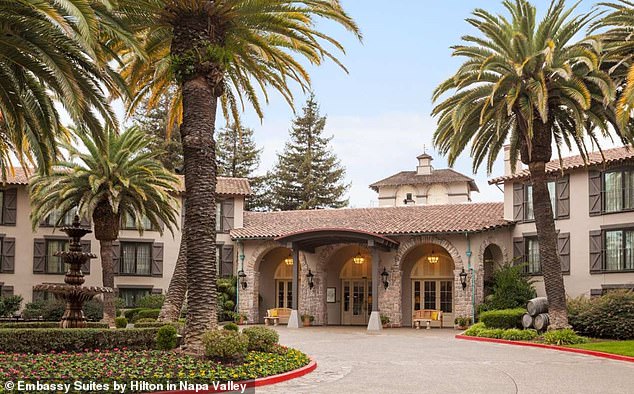 Embassy Suites by Hilton is a luxury hotel in central Napa costing about $400-a-night. It has an indoor and outdoor pool and says it is within 10 minutes of local wineries 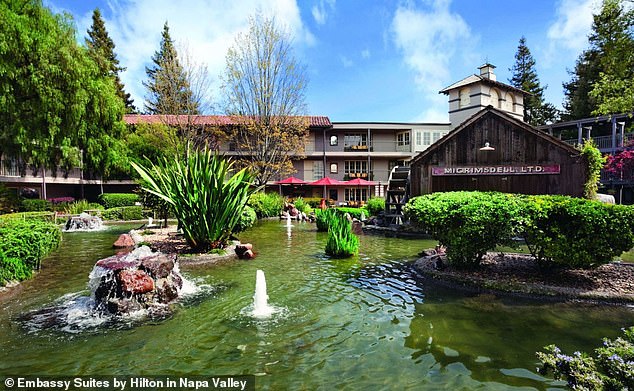 Guests also get to enjoy eight acres of gardens (pictured). None of the people hospitalized in the outbreak had stayed at the hotel, health officials said 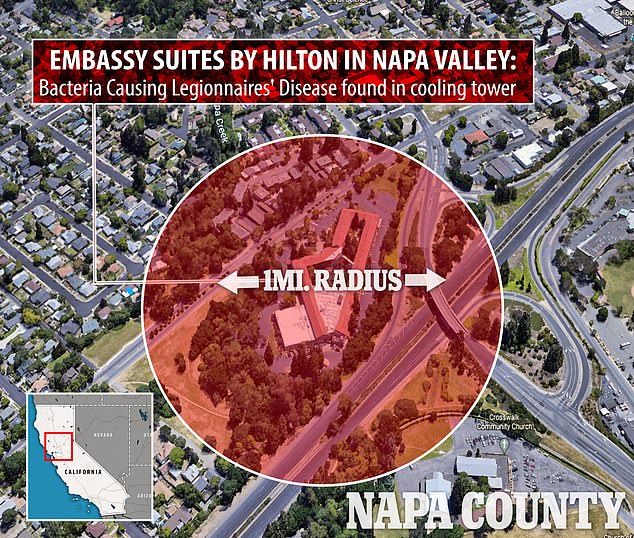 Houses up to one mile from the hotel may have been exposed to Legionnaires’ disease, local health officials said

Health officials revealed the cases in a release Wednesday, calling on locals to keep a look out for the disease. A total of 12 patients were hospitalized, with one dying from the disease.

Patients tested positive between July 11 and 27, but there are fears more could be detected because it can take up to two weeks for symptoms to appear.

All of them lived in Napa except one who was from Calistoga, California — 26 miles away — but had recently visited the city.

WHAT IS LEGIONNAIRES’ DISEASE?

Initial symptoms include a high fever, muscle pain and chills.

Once the bacteria infects a person’s lungs, they may also develop a persistent cough, chest pains and breathing problems.

Legionnaires’ disease is usually caught by breathing in small droplets of contaminated water.

It is not contagious and cannot be spread directly from person to person.

Legionella bacteria is commonly found in water, including lakes and rivers, though is often in harmlessly low numbers.

However, the bacteria can multiply if they find their way into artificial water supplies, including air conditioning systems.

Legionnaires’ disease is commonly treated with a course of antibiotics.

The condition can be particularly serious in people with pre-existing health problems.

Most people make a full recovery, but in some cases it can lead to further life-threatening complications.

The disease can cause your lungs and kidneys to stop working properly.

Another complication is septic shock, which is the result of a blood infection causing a sudden drop in blood pressure.

About 10 percent of otherwise healthy people who contract Legionnaires’ disease will die due to problems as a result of the condition.

Testing is ongoing to locate any other sources of the bacteria — scientifically named Legionella — that cause the disease.

Dr Karen Relucio, the county’s health officer, said: ‘Finding Legionella in one water sample is an important piece of the puzzle.

‘But we must continue to investigate other cooling towers and water sources in the outbreak area, as it is common to find more than one source.’

She added that the team had ‘worked with’ Embassy Suites to ‘remediate’ the source of the exposure.

A spokeswoman for the hotel told DailyMail.com they continued to ‘cooperate fully and work closely’ with local health officials.

‘Upon learning of their concerns, we immediately contacted our consultant and water treatment provider to ensure we were following the guidance set forth by the health department and began remediation,’ they said.

‘The safety and well-being of our guests and team members are of paramount importance, and [the hotel] continues to make every effort to ensure all practices and standards are in line with strict safety and security regulations.’

The four-star rated hotel on Trip Advisor is kitted out with both an indoor and outdoor pool and says it is ‘within 10 minutes of numerous local wineries’.

The bacteria that triggers Legionnaires’ disease is commonly found in waters including lakes and rivers in low numbers.

But when it gets into warm water — such as that from air conditioning units — it can start to multiply rapidly, making it a health risk.

Patients are commonly treated with a course of antibiotics, and most make a full recovery.

It is particularly serious among those with underlying conditions, however, with the World Health Organization estimating up to 80 percent of immune-compromised patients that become infected die from the disease.

In serious cases, Legionnaires’ disease can trigger septic shock — when a blood infection causes its pressure to suddenly drop.

It may also trigger pneumonia, leaving the lungs struggling to function normally.

About 10,000 Americans are infected with Legionnaires’ disease every year, the Centers for Disease Control and Prevention estimated in 2018.

But it estimates that cases are now rising, and could be up to three-times higher annually.

In June two people in the Bronx, New York, died from the bacterial infection after two dozen cases were detected.

Both fatalities were over 50 years old and had underlying conditions putting them at risk of severe disease.

Patients were from the Highbridge neighborhood, which is next to the city’s iconic Yankee Stadium.

Four cooling towers tested positive for the bacteria triggering Legionnaires’ disease, the likely source of the outbreak. Each were sanitized.

It was not clear whether they were located on public or residential buildings.

It was the second outbreak recorded in New York this year, after eight cases and another person were announced to have died from the disease in May.

Glandular fever may be the biggest cause of multiple sclerosis

Boris Johnson finally reveals his roadmap out of lockdown