People should eat DOUBLE the amount of protein suggested by the NHS and current guidelines are outdated, dieticians claim

People should consume twice as much muscle-boosting protein than the NHS recommends, a top dietician has claimed.

Other experts have also declared current guidelines outdated, and are calling for them to be revised to increase protein levels.

Protein is a key nutrient that is crucial for building muscle, bone and skin. Currently the NHS and other international health bodies recommend eating roughly 0.75g of protein per kilogram of bodyweight every day.

This equates to about 56g daily for the average man, and 45g for women, the equivalent to one medium-sized chicken breast. 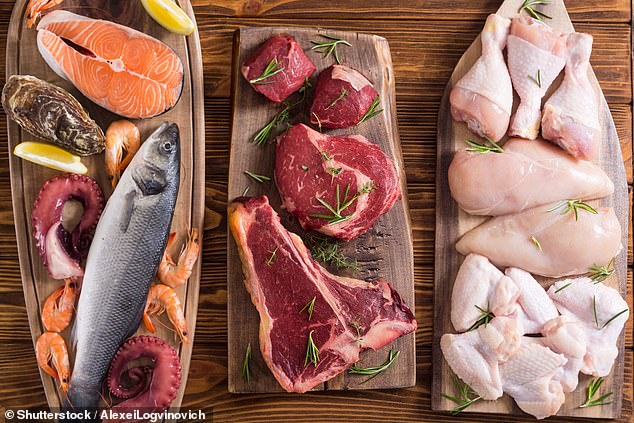 Experts are suggesting the amount of protein is is recommended people consume should be increased. Pictured are fish, red meat and chicken, all of which are high in protein

But according to Professor Stuart Phillips, an expert in muscle growth from McMaster University in Canada, this is far from enough.

‘For 20-plus years I’ve been saying that the recommended dietary allowance of protein is insufficient,’ he told BBC Radio 4’s The Food Programme.

Prof Phillips recommends eating at least 1.2g of protein per kg of body weight daily. That’s about 100g for younger men or 84g for younger women – the equivalent to a portion of eggs at breakfast, a portion of tuna at lunch and a chicken breast for dinner.

Adults over 60 – who are prone to age-related muscle loss – may need even more, and could benefit from a protein supplement that Prof Phillips is developing.

‘The NHS recommendations are based on studies done a long time ago, and now we have much more accurate ways of measuring and determining protein intake.’

The old nitrogen balance studies measured the amount of nitrogen in volunteers’ sweat and urine.

Nitrogen is released by the body when muscle tissue grows.

By tracking levels of nitrogen released by the body when muscle tissue grows, scientists worked out how much protein was needed to help stimulate growth.

Dr Patel says modern techniques – in which food consumed with a radioactive dye helps to track the conversion of protein to muscle – give a more accurate picture.

‘This shows us more protein is needed than initially thought in order to stimulate muscle growth,’ she says, adding that her patients ‘time and time again’ are failing to get adequate protein in their diet.

Only SIX healthy children died of Covid during England’s first year of the pandemic, study reveals

Why brushing your teeth properly could ward off arthritis

ROBERT HARDMAN: I took an aspirin every day to prevent a heart attack… it could have killed me!