Deaths from drug overdoses in the U.S. hit their highest level since records began last year, provisional figures showed Wednesday — with opioids including fentanyl behind nearly three in five fatalities.

The Centers for Disease Control and Prevention (CDC) estimated there were 107,622 fatalities linked to overdoses during 2021, or one every five minutes, marking a 15 percent uptick on the previous year’s record of 93,655 drug deaths and the seventh 12-month period in a row where they have risen.

Opioids including fentanyl were linked to the majority of fatalities, or 80,800, followed by psychostimulants such as methamphetamine at nearly 33,000. It was possible for more than one drug to be linked to a fatality.

Only one state — Hawaii — saw its deaths from overdoses decline last year, with Appalachian states like West Virginia, Tennessee and Pennsylvania remaining the nation’s hotspots for fatalities.

Experts warned fentanyl and other drugs had now been ‘injected… through the whole country’, with fatalities surpassing another ‘devastating milestone’.

They added that the rising deaths were likely due to fentanyl — which is up to 100 times more potent than morphine — being mixed with other drugs, and people taking them often being unaware this had happened.

The drug is largely sourced from Mexico via China, with experts pointing out that the southern border crisis is the main way they are trafficked into America. On Wednesday drug enforcement officers called on the Chinese to do more to stop the drugs being taken to Mexico. 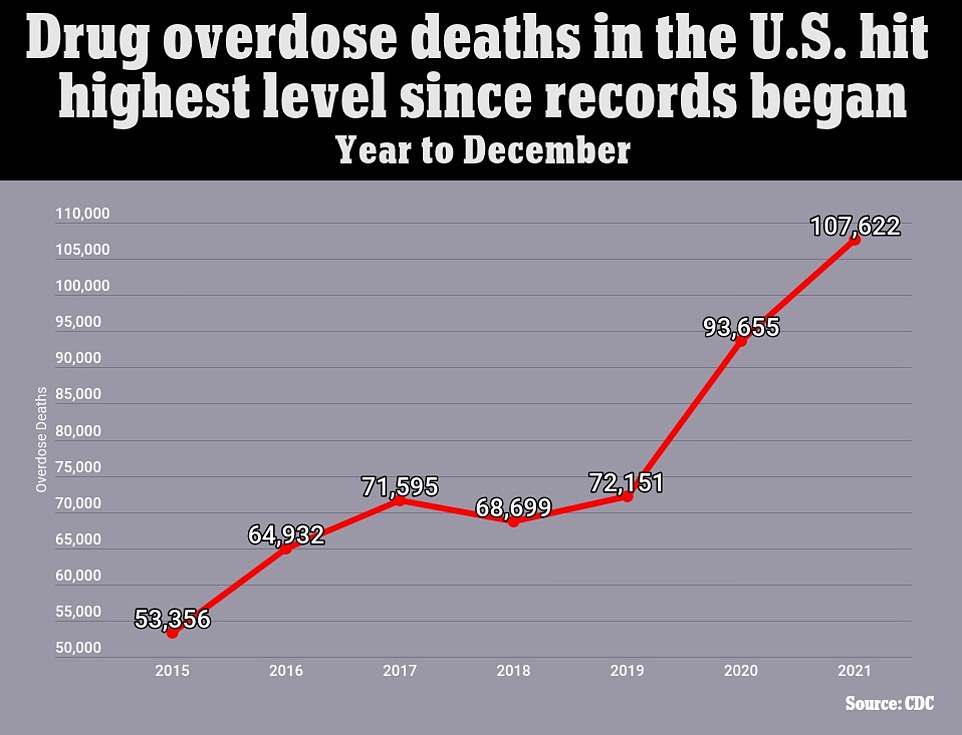 The above graph shows the CDC estimates for the number of deaths triggered by drug overdoses every year across the United States. It reveals figures have now reached a record high, and are surging on the last three years 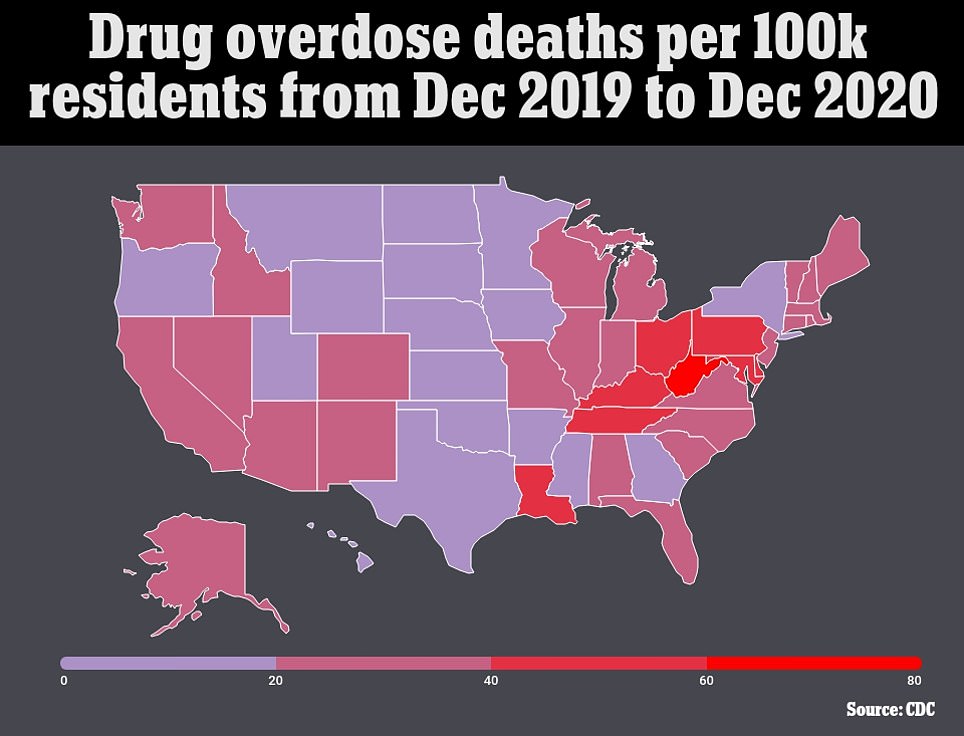 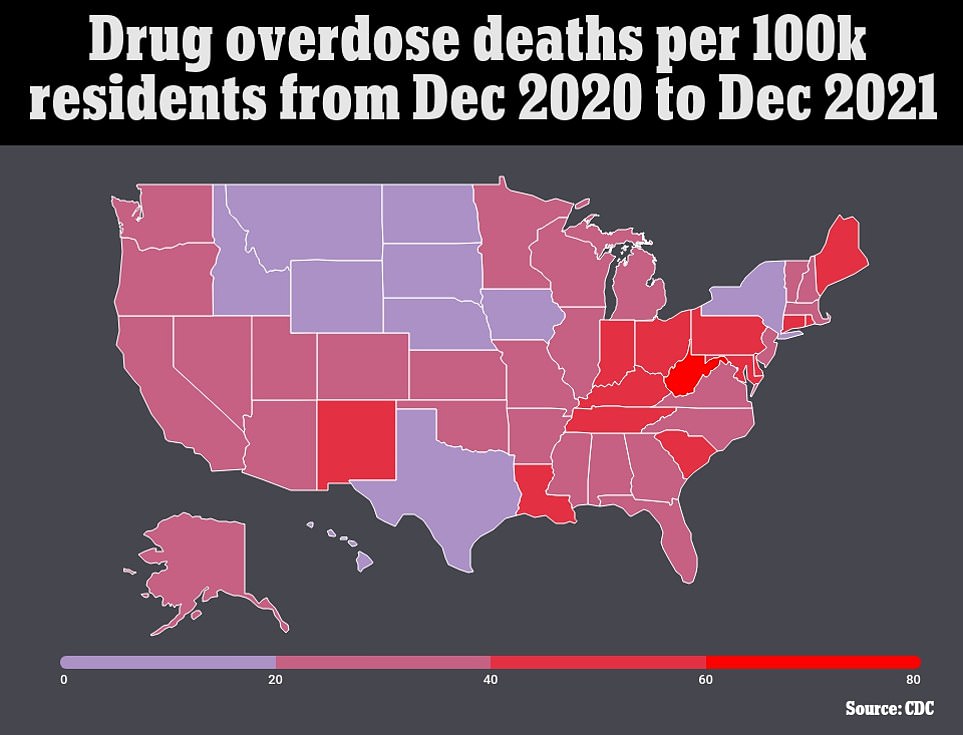 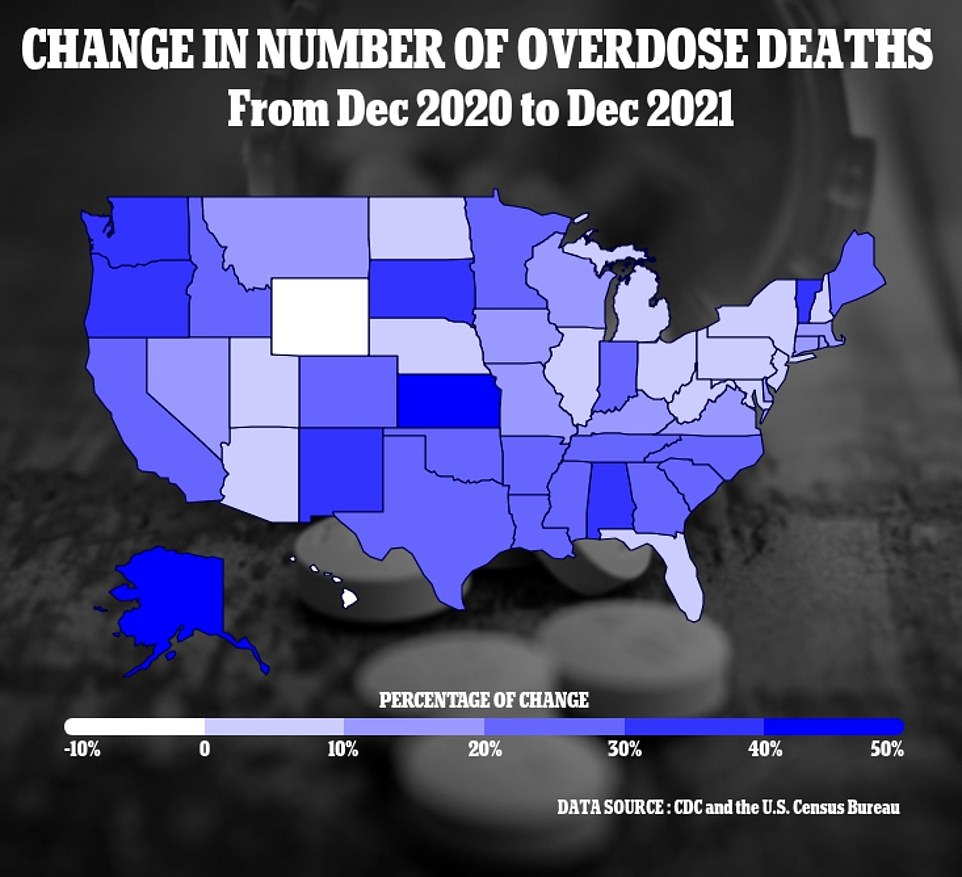 The above map shows the percentage change in drug overdose deaths by state across the U.S., each has seen a rise except for Hawaii. In Oklahoma deaths did not increase or decrease compared to previous years 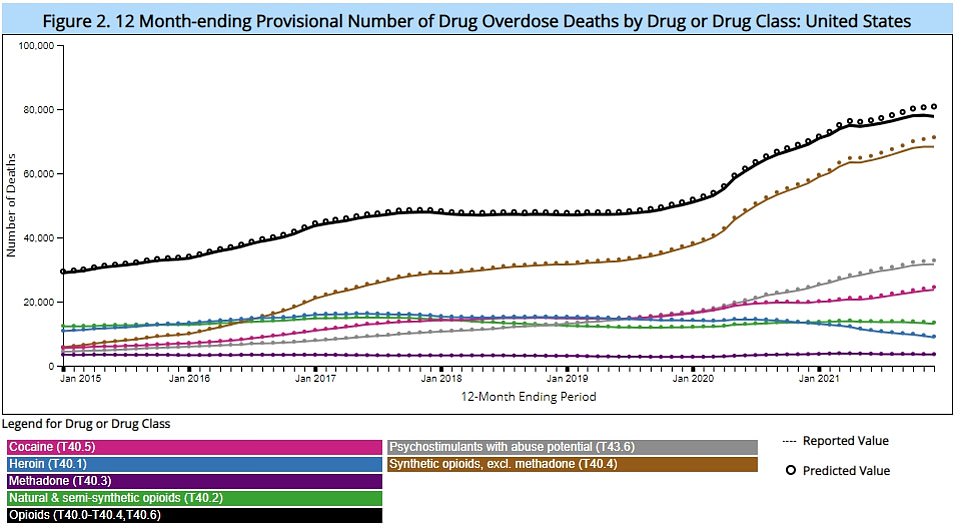 Every month the CDC receives reports from every state on the number of deaths it recorded that were due to a drug overdose, which it uses to calculate a provisional estimate of deaths in a year period.

Data is reported about six months after the death occurred because of the time taken to confirm a fatality was due to an overdose rather than another disease.

Number of teens killed by fentanyl has TRIPLED since the pandemic began, researchers say

Teenage deaths from overdosing on fentanyl have tripled over the two years since the COVID-19 pandemic began, a study revealed last month.

Overall, deaths from overdosing on any drug in the age group doubled from 2019 to the second year of the pandemic.

Fentanyl is at the center of America’s drugs crisis, which experts say is now at an ‘unacceptable’ level and should ‘shock everyone’.

The synthetic opioid is often mixed with other drugs such as heroin, Xanax or cocaine to raise their euphoric effects. It means many people overdose on the drug without realizing they are even using it – often fatally.

Reacting to the figures Dr Nora Volkow, the director of the National Institute on Drug Abuse, warned: ‘These data surpass another devastating milestone in the history of the overdose epidemic in America.

‘Behind each of these numbers, there is a person’s life that has been lost, a family devastated, a community impacted.

‘Compounding the tragedy, we have underused treatments that could help many people.

‘We must meet people where they are to prevent overdoses, reduce harm, and connect people to proven treatments to reduce drug use.’

She told USA Today: ‘We’re finding that people are overdosing because they’ve had no exposure to opioids that powerful.

‘We like to categorize our deaths to a single drug or a single cause of death. [But] what’s happening right now on the street is this incredible experiment in combination of drugs.’

Rahul Gupta, the director of the White House’s Office of National Drug Control Policy, said: ‘It is unacceptable that we are losing a life to overdose every five minutes around the clock.’

Deaths from drug overdoses have been trending upwards over the past three years after a brief drop in 2018.

They were at their lowest in 2015 — when current records began — with 53,000 fatalities recorded that year.

At the other end of the scale Nebraska (11), South Dakota (11.2) and Iowa (14.8) recorded the least fatalities linked to overdoses.

Breaking down the figures by change over the previous year, Alaska saw the biggest spike with fatalities up by 75 percent, alongside Kansas (43 percent) and South Dakota (35 percent).

Opioids such as fentanyl are at the center of America’s epidemic crisis with drugs, and are behind the majority of overdose deaths in the country.

The super-strength drug first shot to notoriety in 2016 after music superstar Prince died of a fentanyl overdose, and has continued to tear through families since. 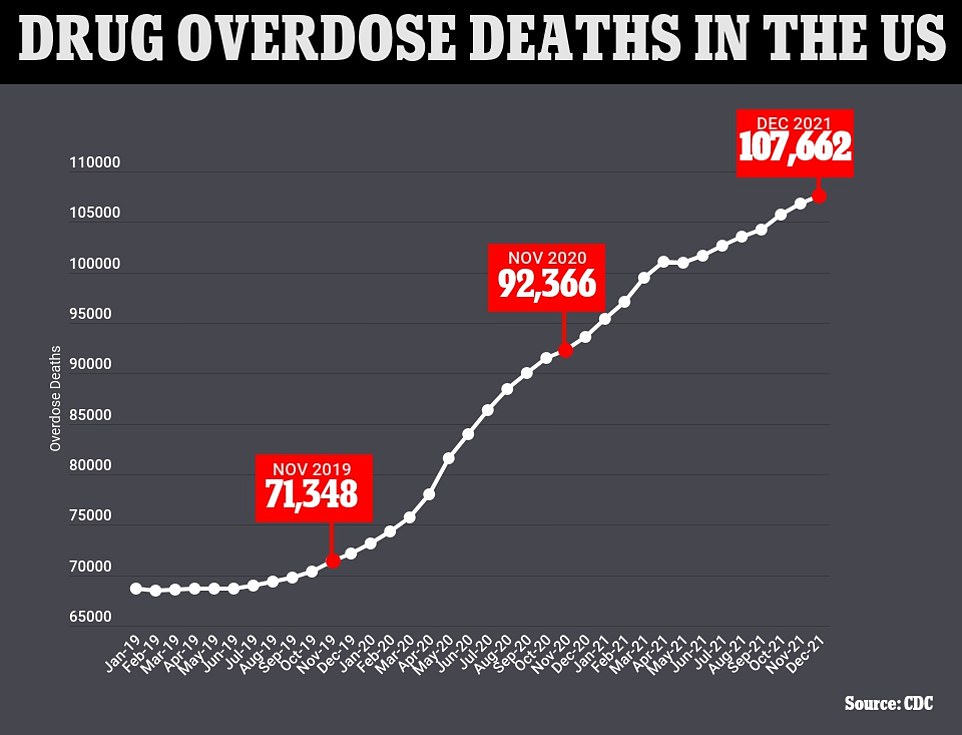 The above graph shows the cumulative annual figure for the number of drug overdose deaths reported in the U.S. by month. It also shows that they are continuing to trend upwards

US drug enforcement agencies warn that taking as little as two milligrams of the drug could result in an overdose. The first symptoms are often clammy skin and stupor.

In some cases this can also lead to respiratory failure, resulting in death.

Survey figures from 2020 showed that among the 41.1 million people who needed treatment for substance use disorders (SUD), only 2.7 million (6.5 percent) had received treatment at a specialist facility in the last year.

The administration is seeking to expand access to life-saving treatments such as naloxone, drug test strips and syringe services programs.

It has also requested a budget increase for border control and drug enforcement agencies to stem the flow of illegal drugs.

On Wednesday the Drug Enforcement Administration also called on the Chinese Government to crack down on illicit networks supplying fentanyl to the U.S.

Administrator Anne Milgram told CBS News: ‘We would like China to do more.

‘For example, we need to be able to track every shipment of chemicals that’s coming out of those Chinese chemical companies and coming to Mexico. Right now, we can’t do that.’

Chinese factories are currently the largest producer of precursor chemicals that can be used to make fentanyl, she said, and that once these drugs make it to Mexico it is ‘too late’.

Milgram said more than 2,100lbs of precursor chemicals for the drugs — or enough to make a billion doses — were seized at the border between January 2021 to March 2022. But a lot is still slipping through the net.

Jon Gosselin celebrates his sextuplets turning 18: 'I am free!'

The booster effect? Cases are already dipping in over-60s as experts say third jabs are behind drop