The United States allowed its monkeypox vaccine stockpile to dwindle from 20million to just 2,400 doses because it had only planned for a smallpox outbreak and was working on alternatives, it was revealed today — as California and Illinois declared a state of emergency over the virus.

Official documents showed how the ‘strategic’ stockpile was allowed to plummet to 0.012 percent from its peak in 2013, as doses of the Jynneos vaccine — which only have a three-year shelf life — ran out.

An attempt was made to restock it in 2015 when another 8million doses were ordered. Once these were expired, America signed for another 1.3million — but mostly these were still in Denmark when monkeypox struck because the Food and Drug Administration still hadn’t inspected their manufacturing facility.

Thousands of gay or bisexual men have been left waiting weeks to get doses, with many left with no option but to spend hours sitting at home hitting refresh on their browsers in the hopes of securing a coveted appointment. States have also complained they are getting too few doses from the national stockpile.

The revelation published by the New York Times came as America’s cases tally hit 5,800, with a further 622 infections detected this weekend. There have been no deaths to date, but four have been detected outside Africa including two in Spain which has a similar-sized outbreak.

California and Illinois — which have the second and third highest case counts — both said they would declare a state of emergency over monkeypox today. They join New York City and San Francisco in hitting the panic button over the outbreak, although federal officials are yet to make a similar move. 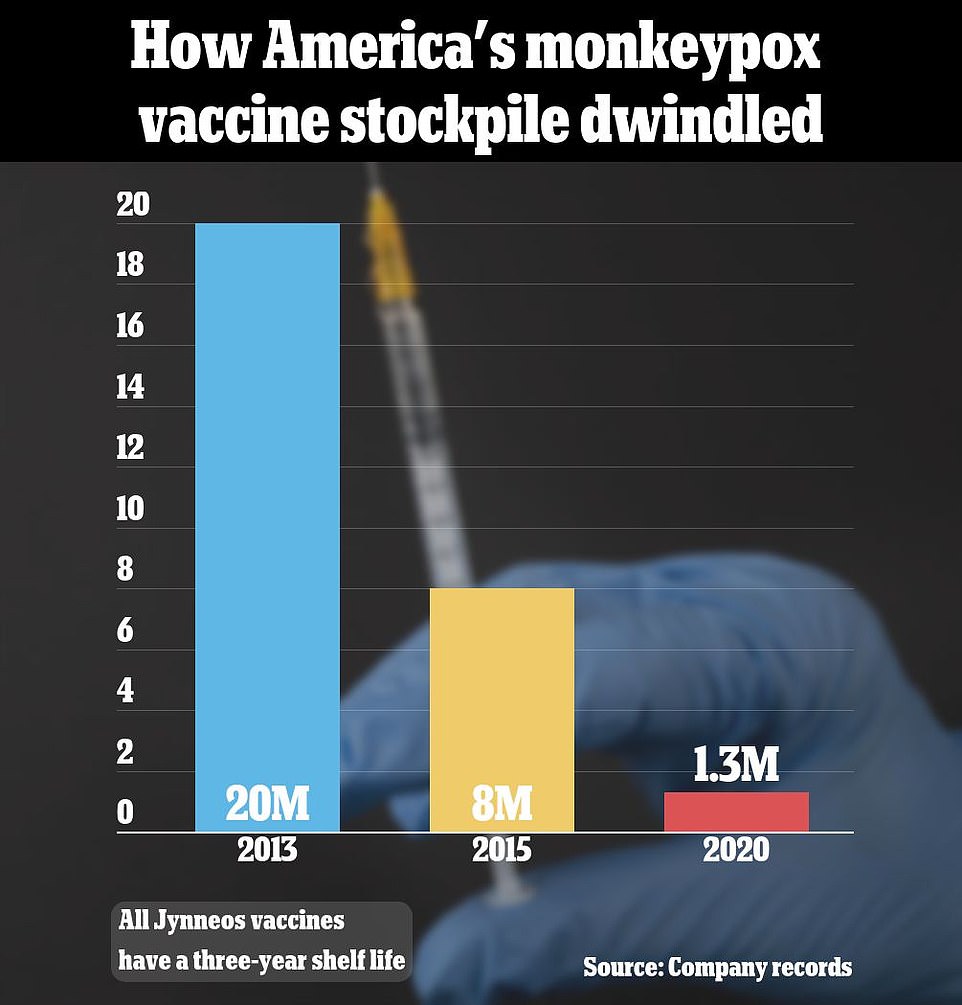 America once had 20million doses of Jynneos vaccine – the preferred option for fighting monkeypox – in its national stockpile. But these jabs, with a shelf-life of three years, quickly expired. It has moved to replenish stocks since then, but bought less as the strategy shifted to developing a longer-lived jab 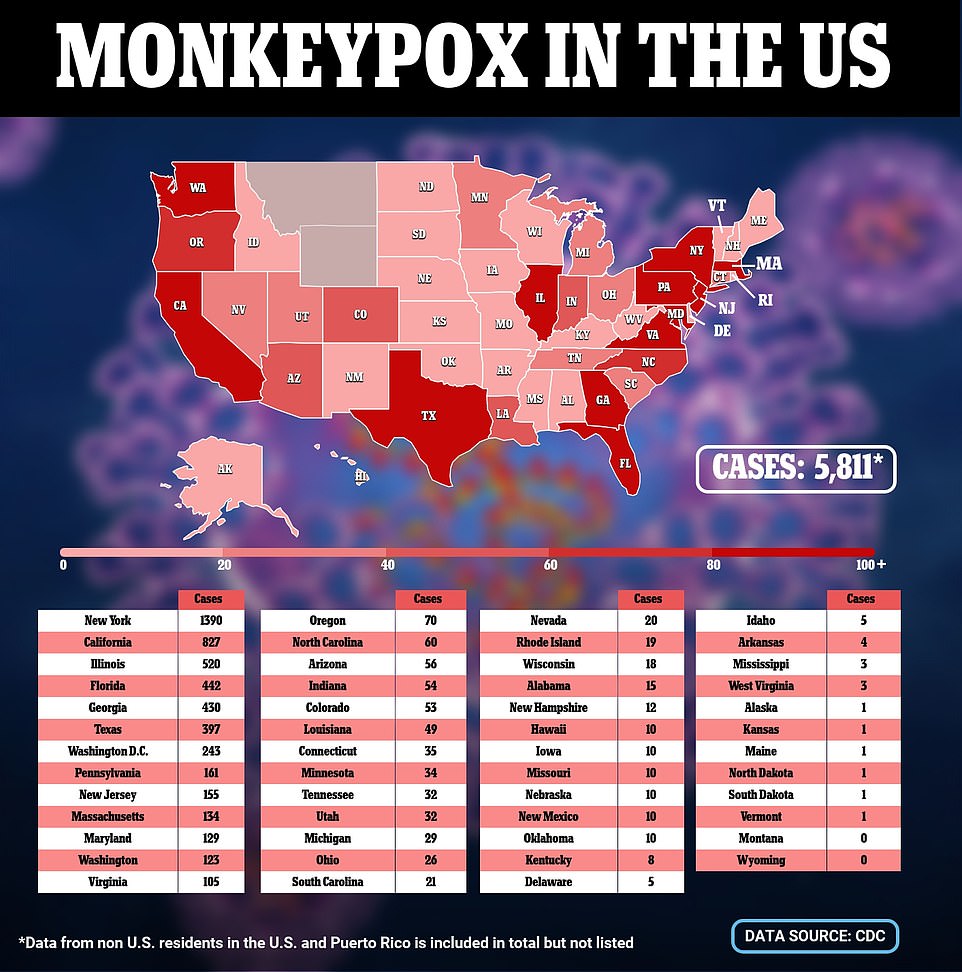 The above map shows where in the U.S. monkeypox cases have been detected. New York has the largest outbreak and is the only state to confirm more than 1,000 cases 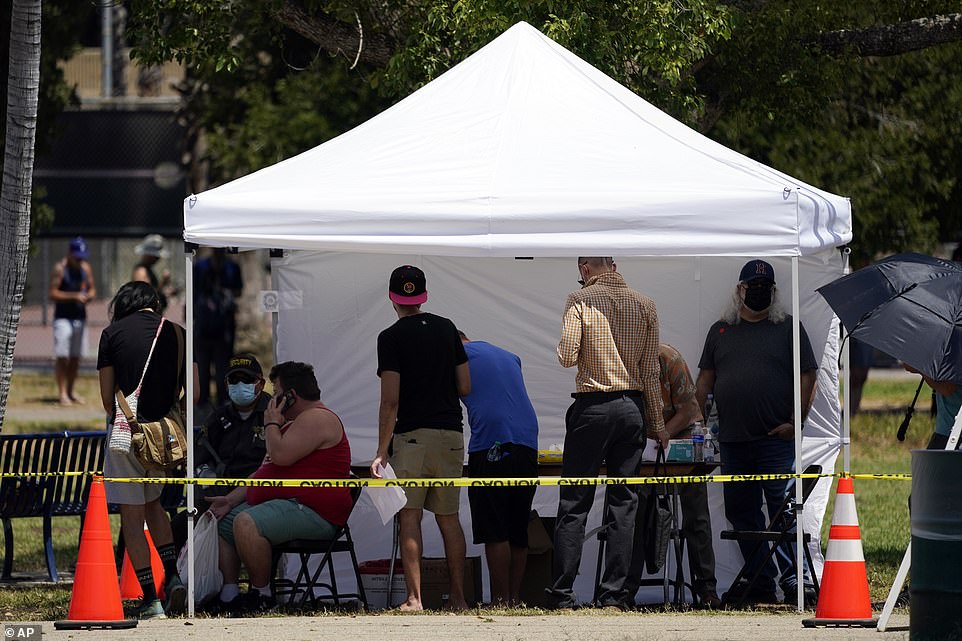 Pictured above are men waiting in line for the monkeypox vaccine in Encino, California. It came after the state’s governor declared a state of emergency in the area 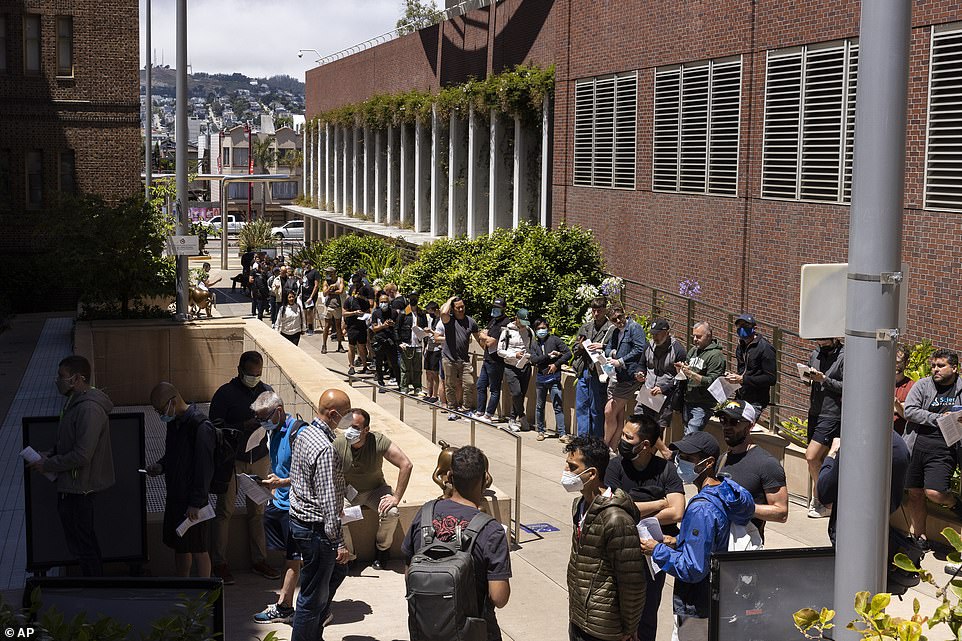 Pictured above are men standing in long lines to get doses of the monkeypox vaccine in San Francisco in early July. The city was the first place to declare monkeypox an emergency

America’s national stockpile of these jabs was ramped up after the 9/11 attacks over fears terrorist groups could get hold of and re-release the smallpox virus, which is currently eradicated.

The Jynneous doses were only ever meant to be offered to vulnerable people in this case, such as young children and older adults. Millions of doses of other jabs like ACAM2000 and Dryvax were held for the general population, but these are generally not preferred because of the risk of side-effects.

As the Bavarian Nordic-made jabs expired, however, federal officials decided to invest in developing new ‘freeze-dried’ jabs that could last for up to ten years — or three-times longer than current stocks.

Timeline of monkeypox in the United States

1958: Monkeypox is discovered when an outbreak of pox-like virus occurred in monkeys kept for research.

1970: First human case of the virus is recorded in the Democratic Republic of Congo. It was later detected in a number of other central and western African countries.

2003: America’s former largest monkeypox outbreak occurs. A total of 47 people are infected after having contact with pet prairie dogs that picked up the virus at a farm.

July, 2021: Monkeypox case detected in the U.S. in a citizen who had recently returned from Nigeria.

November, 2021: Monkeypox is detected in another U.S. resident who recently returned from Nigeria.

May, 2022: A man in Massachusetts is diagnosed with monkeypox, becoming the first case in the current outbreak. There are now more than 5,000 cases nationwide.

July, 2022: Monkeypox cases are detected in children and a pregnant woman in the U.S., in a sign it is spreading to other groups.

They have invested more than $1billion in this to date, but the longer-lived jabs are still yet to be developed.

Amid dwindling supplies, the Federal Government also switched to buying the vaccine in bulk — or as a fluid stored in plastic bags. This is stored in Denmark and could not immediately be rolled out because it still needed to be filled-and-finished, or put into vials to be distributed to the population.

An order of 1.3million more Jynneos doses was placed in 2020 to augment the national stockpile records showed.

Of these, 372,000 doses had been filled and finished by an FDA-approved contractor meaning they could quickly be shipped to the U.S. for use.

But the rest — nearly a million jabs — went through this process at the company’s new factory which was yet to get the rubber-stamp from the FDA. It meant that when monkeypox struck they were held up in Denmark while officials carried out the inspection.

Dr Gary Disbrow, who directed the agency that supported the development of Jynneos and other jabs, told the NYT that with the national stockpile: ‘Our planning was for smallpox.’

‘We have to prepare against multiple threats with a limited budget.’

Monkeypox — which had been known since the early 1950s from Africa — had not entered high on their list of threats because it generally did not circulate beyond the continent.

All the vaccines being used were designed to fight smallpox, but officials say they can also be used against monkeypox because the two viruses are closely related.

It was revealed as the governors of California and Illinois declared states of emergency over the monkeypox outbreak, joining New York and San Francisco.

Both states have seen cases escalate in recent weeks, with California now having the second-biggest outbreak in the country and Illinois the third largest. They have declared the emergencies to make more resources available to combat the virus, and ramp up the number of people that can dish out the jabs.

Declaring the emergency in California, Governor Gavin Newsom said the state was ‘working urgently… to slow the spread of monkeypox.’ He added they were leveraging testing and contact tracing knowledge from the pandemic to fight the virus. 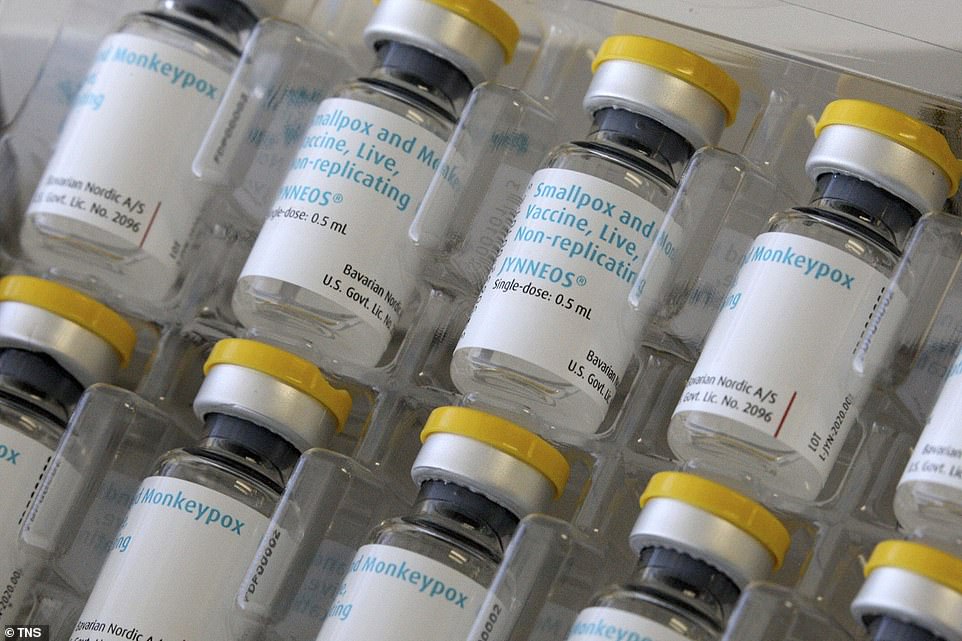 Pictured above are vials of the monkeypox and smallpox vaccine in Chicago, Illinois, after the state today declared an emergency over the outbreak of the virus

In Illinois, Governor JB Pritzker said: ‘I am declaring a state of emergency to expand the resources and co-ordination efforts of state agencies in responding to, treating and preventing the spread of monkeypox.

‘In Illinois, we will ensure our LGBT community has the resources they need to stay safe while ensuring members are not stigmatized as they access critical health care.’

It is understood that the federal government is also considering declaring monkeypox an emergency, but is yet to take the step. It was reported this could be as soon as last week.

California has received 61,000 doses of the vaccine to date, and in some areas is aiming to roll them out to everyone who requests one. Los Angeles is receiving a separate vaccine allocation.

This tally is far below the 600,000 to 800,000 jabs that have been requested. The health department says it is ‘hopeful the federal government will deliver additional vaccine to meet the state’s request’.

To date more than 336,000 doses of the Jynneos vaccine have been dished out to states from the national stockpile.

A further almost 800,000 doses have also been delivered to the country, and are now being allocated to different states and cities.

Holding hands with team-mates? Mikel Arteta's unique methods exposed in All or Nothing

Children conceived through IVF do not develop differently, study finds

At least 1,500 people complain that they developed ringing in the ears after their vaccine