£450 for a pair of trainers that look like a dog has eaten them: Balenciaga release slip-on sneakers designed to look destroyed

Luxury fashion brand Balenciaga has released yet another pair of damaged-looking shoes – and they’ll set buyers back nearly £500.

The dog-eared ‘Paris High’ sneakers from the Spanish clothing giant look like Converse-style plimsolls, but they’re missing any form of heel support.

Available in black and off-white, most sizes of the ‘distressed rubber and canvas’ trainers are already sold out. 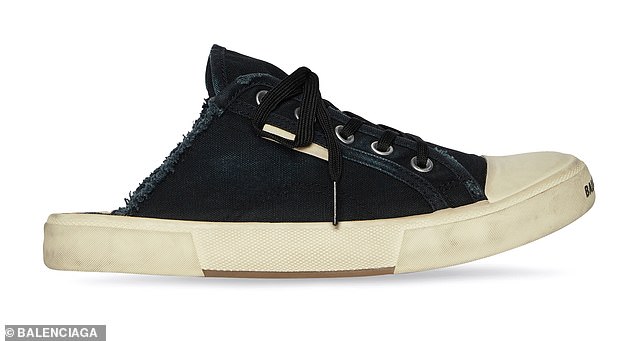 Incredibly, numerous sizes of the £450 ‘Paris High’ sneaker slip-ons have already sold out 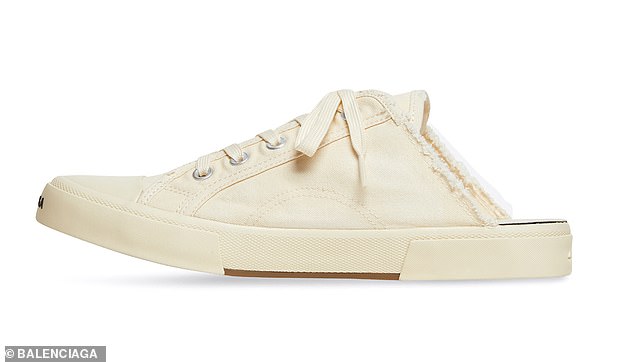 According to posh clothing seller Net-a-Porter, the heel-less design ‘creates the illusion that the back has been cut off’.

An editors’ note adds: ‘They’re set on rubber soles and stamped with the brand’s moniker along the toes.’

Recommended to match with the absurd invention are an £875 blouse, £650 black jogging bottoms and a studded, ‘croc-effect’ leather handbag – which costs an eye-watering £1,690. 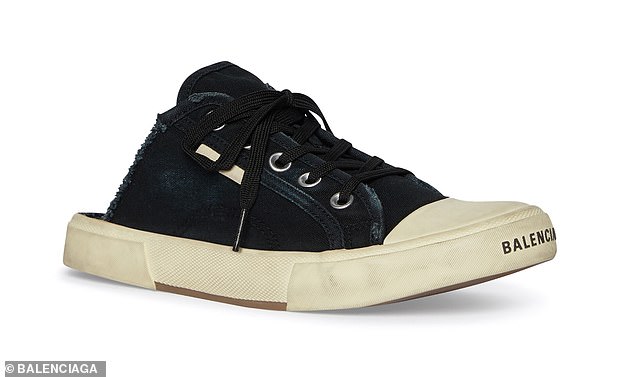 Net-a-Porter states: ‘They’re set on rubber soles and stamped with the brand’s moniker along the toes’ 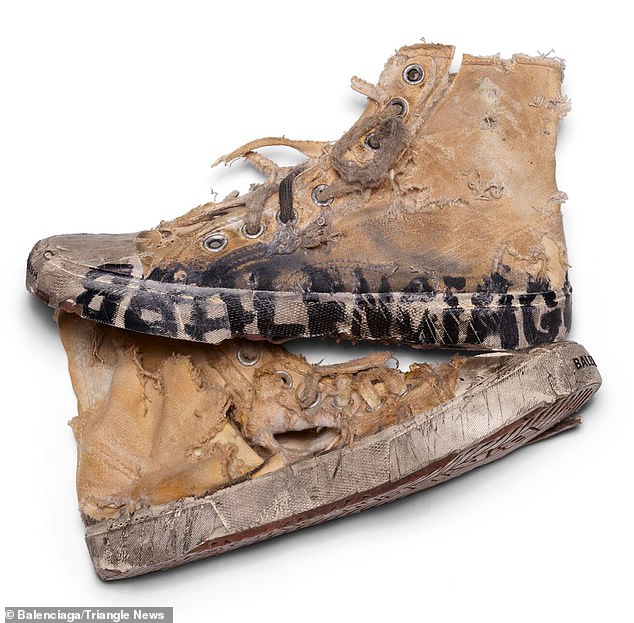 Alongside the £280 silver ring and £325 hoop earrings advised to pair with the ‘Paris High’ shoes, the full set to match with the edgy trainers will set you back a modest £3,820.

That’s just a bit more than the company’s newly released bin bag-inspired ‘pouches’ – which cost a less than slender £1,470.

The fashion house is selling the drawstring calfskin pouch, which the brand call a ‘trash pouch’, in four different colours including black, white, blue and yellow.

Many people have taken to Twitter to question whether the brand is conducting a social experiment, or simply trolling the masses. 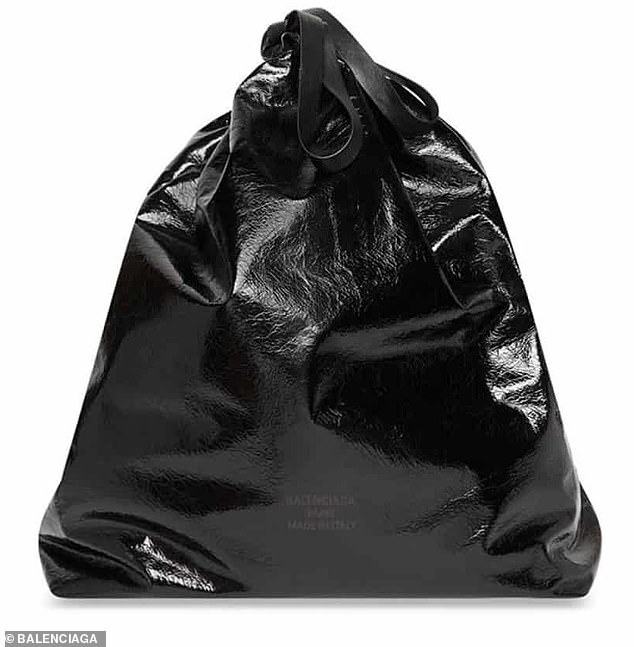 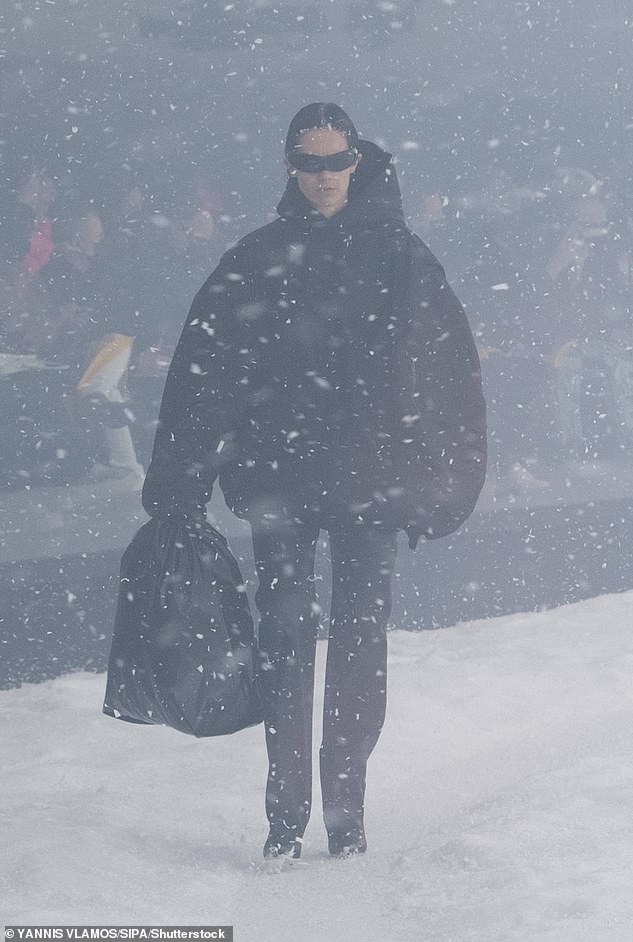 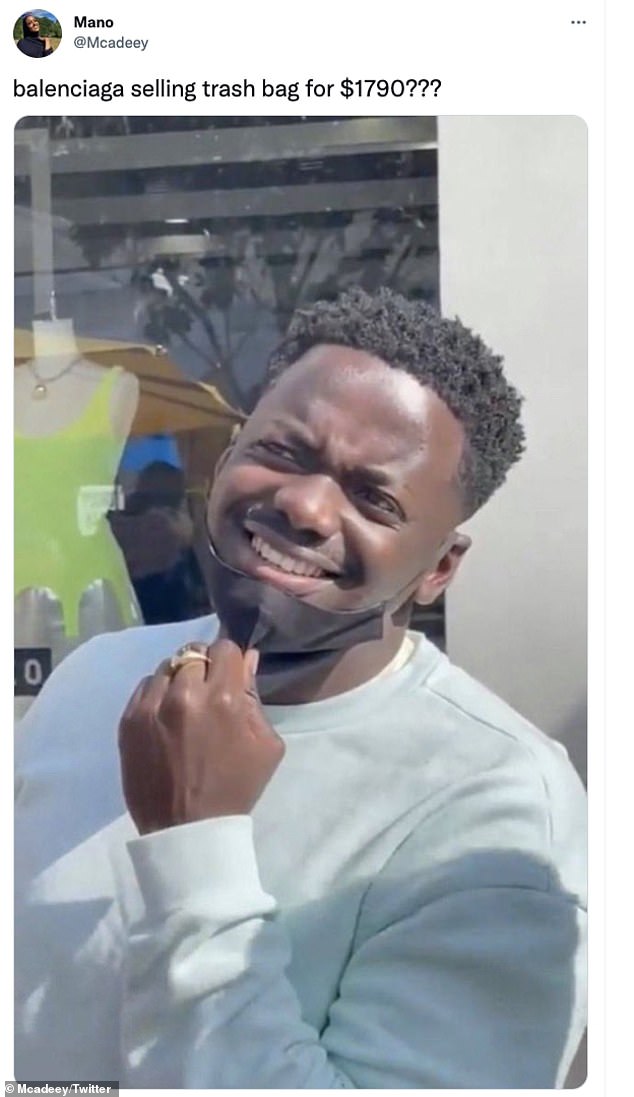 On the Balenciaga website the label revealed: ‘The Trash Pouch is inspired by a garbage bag.’

One Twitter user said ‘luxury fashion’ is legal theft and ‘fashion is a joke’.

Another described the release as a ‘morbid social experiment’.

Balenciaga’s latest audacious efforts follow the unveiling in May of high-top versions of the ‘destroyed’ design, retailing at up to £1,290.

Their hotly awaited reveal was greeted by widespread scepticism on Twitter, with one user posting: ‘This is a joke from Zoolander.’

One mum said: ‘Are they having a laugh?’