Female fans have shared emotional tales of being banned from playing football – as Alex Scott and Ian Wright today demanded that more cash be injected into grassroots the sport to kickstart change following England’s Euro 2022 win.

Hope and optimism is growing that the Lionesses’ historic victory act as a catalyst for the women’s game to ‘explode’ in England and inspire generations to come.

But just 44 per cent of secondary schools offer girls are offering girls the same access to football as boys in PE lessons, according to figures published this month.

Little more than a third of secondary schools also offer girls equal access to coaching via local clubs outside of school hours.

The research from England Football, part of the FA, reveals that 91 per cent of girls without access to football in PE at school want to play it, with participation falling significant from primary into secondary education.

It comes as Wright, who worked as a BBC pundit throughout the competition, has suggested England’s policy makers will throw away the legacy of the win if girls don’t get the same chances as boys.

He has warned of MPs and businesses ‘jumping on’ the Euro 2022 victory, adding that they must be forced to invest in the game.

The former England striker said: ‘For me, someone like the Premier League takes over, markets the WSL.

He highlighted the clear appetite for women’s football in the UK, but warned that the success must not stop at the Euro win.

‘We see politicians rushing, we see brands rushing, munching on what they’ve done because of this tournament. 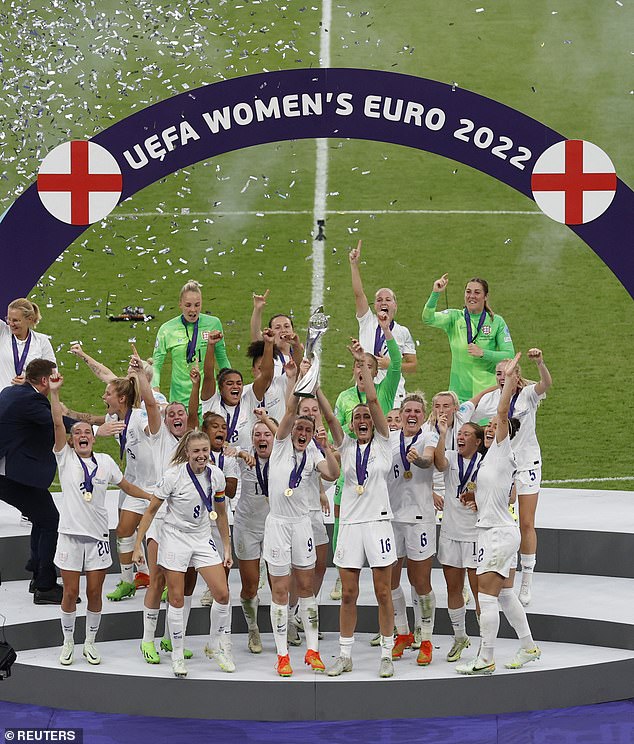 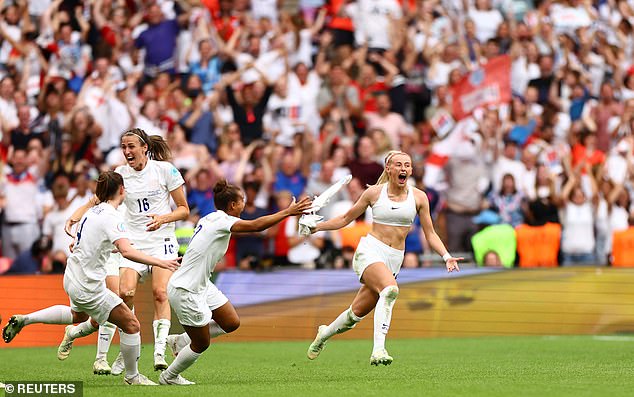 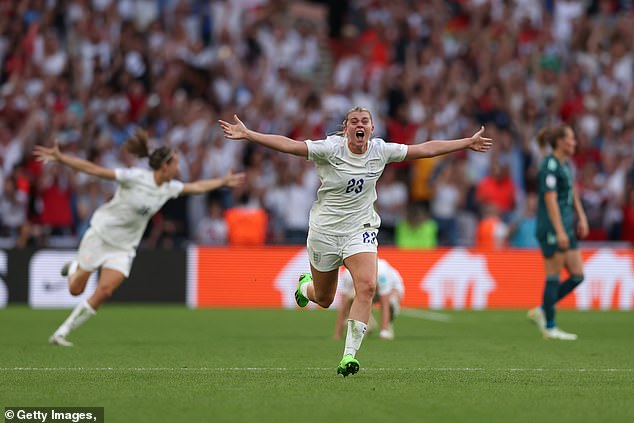 Alessia Russo, who shot to stardom following her audacious backheeled goal in the semi-final, celebrates as the final whistle is blown yesterdau 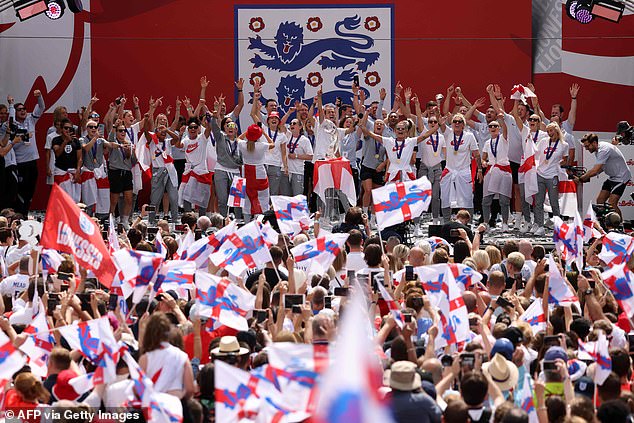 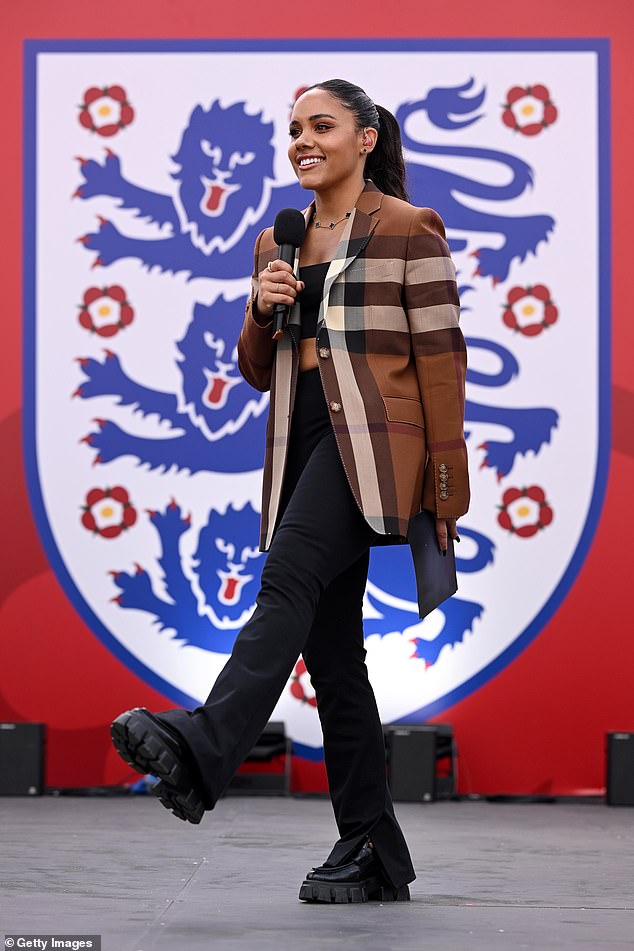 Alex Scott speaks during the celebration at Trafalgar Square today. She has the win must be a game changer in terms of raising the profile of women’s football

His sentiments were echoes by former Lioness and pundit Alex Scott today, who said England’s victory would be a game changer in terms of raising the profile of women’s football.

She told BBC Breakfast: ‘These Lionesses have raised the bar. They have changed the way women’s football is viewed in this country. The train has left the station and it is gathering pace.

‘It will be tragic to take any steps back after what we have witnessed yesterday and through the whole tournament.

‘There must be an opportunity for every single girl to play football if they want to.’

More than 87,000 people packed out Wembley yesterday, while a record peak audience of 17.4 million people also tuned in to watch on television. Thousands draped in England flags also packed Trafalgar Square to watch on a big screen.

And football fans have today shared emotional stories and pictures highlighting the significance of yesterday’s heroic performance has had on their lives.

Nicole Lampert said: ‘My boys asked why I was crying and I told them that when I was little girls weren’t allowed to play football (outside than in the garden or park).

‘There’s been such a fight to get here before they even entered the stadium glorious.’

Posting a picture of his daughter watching, Kevin Windsor tweeted: ‘This is why it matters. Representation. My daughter doesn’t have to have an interest in football.

‘She just has to know that it’s an option. That she can become anything she sets her little heart on. From a princess to a lioness. And everything in between.’

Astrophysicist Professor Lisa Harvey-Smith said: ‘As a child, I played several hours of football every day. I was obsessed – and good at it.

‘But my Primary school team was banned from playing because we picked the best team, on merit, and that team included me and one other girl.

‘As I grew up, I saw my brother play competitively and watched from the sidelines as I was unable to access the game, since there was no team for girls anywhere near us.

‘So this morning, when the camera panned around a packed Wembley Stadium with 87,192 fans cheering England to an historic win (an England football team has never won a trophy in my lifetime) I had tears in my eyes. LET GIRLS PLAY!’

Some also posted pictures of relatives who had been ‘banned’ from playing football.

Posting a team photo, Alex Andlau added: ‘This is for my Great Grandma, who was banned from playing football 3 years after this picture was taken. Tears. Tears of joy. Our Lionesses.’

Victoria Mackarness revealed she had written a letter to then England rugby star Johnny Wilkinson detailing how she was teased in school because she played rugby. 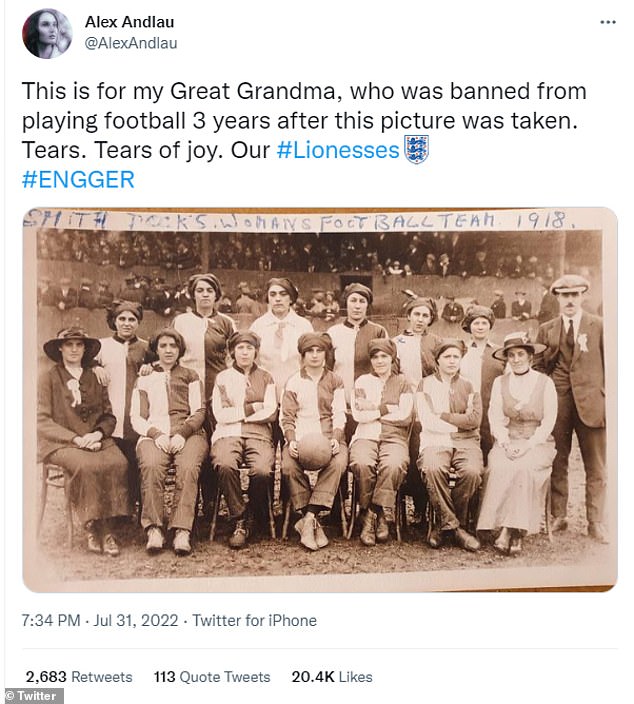 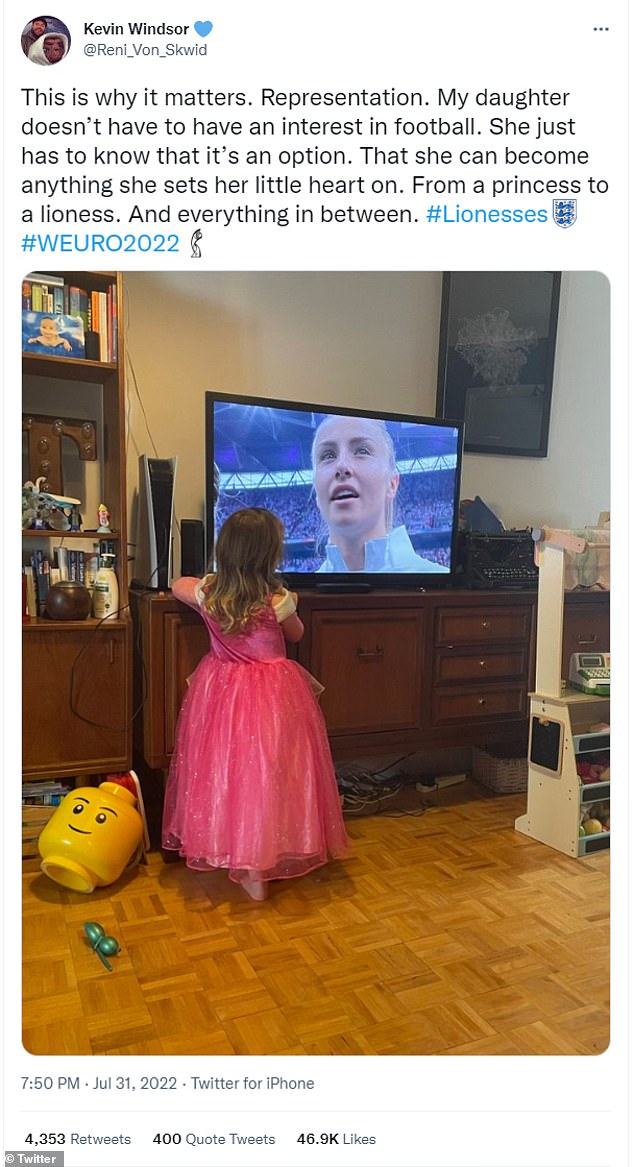 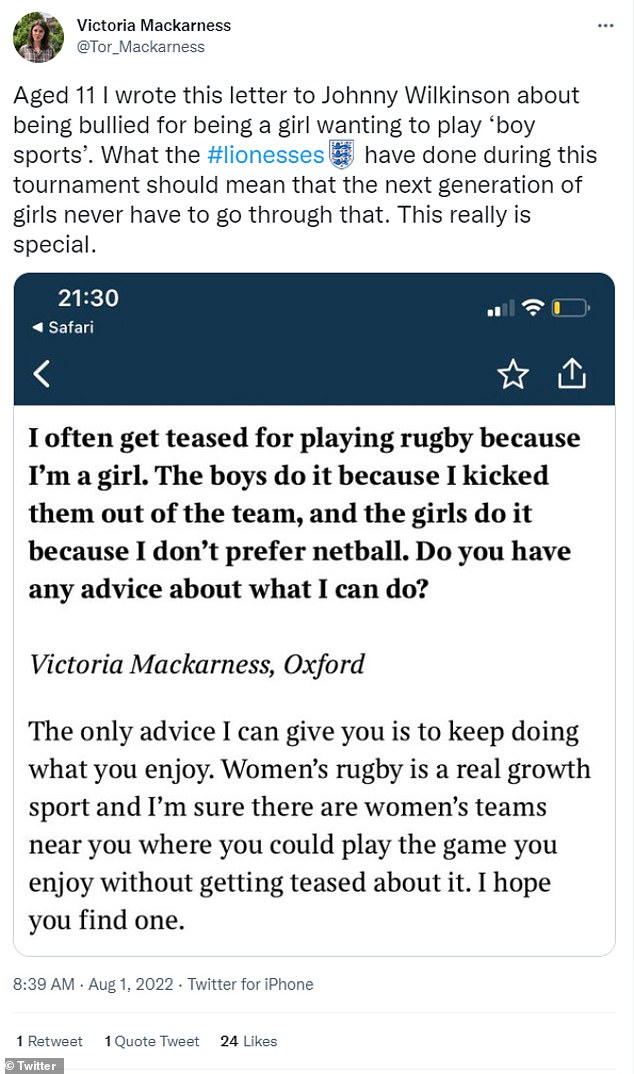 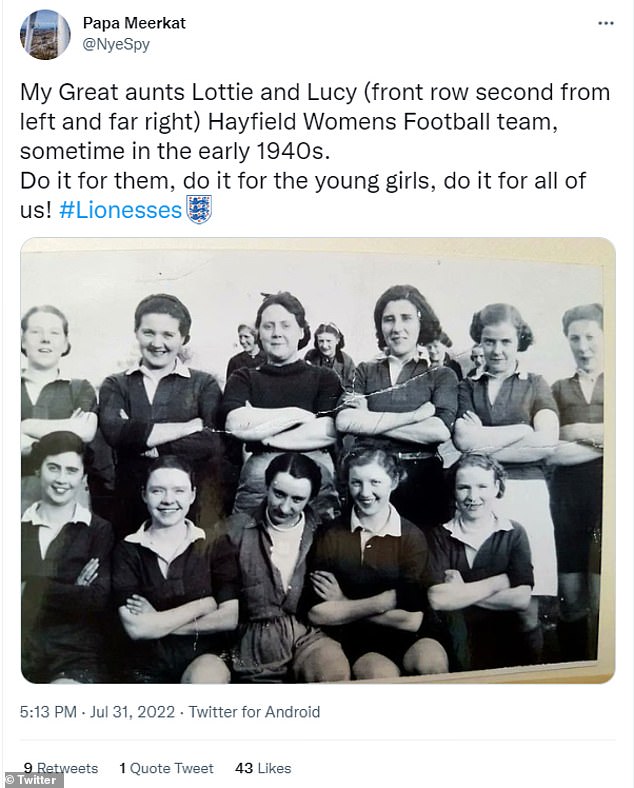 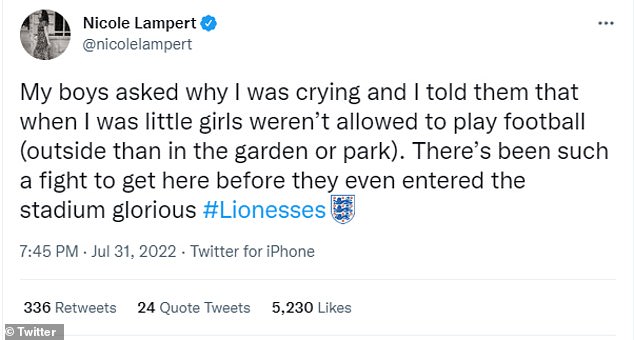 She said: ‘Aged 11 I wrote this letter to Johnny Wilkinson about being bullied for being a girl wanting to play “boy sports”.

‘What the Lionesses have done during this tournament should mean that the next generation of girls never have to go through that. This really is special.’

In her post-match press conference, which was interrupted by the ecstatic England squad singing the chorus of Three Lions, manager Sarina Wiegman spoke of her hope that the landmark occasion would leave a legacy that stretches beyond football and into wider society.

She said: ‘The world will be changed, we know that. When you win the European Championship the world changes.

‘What we have done is just really incredible. I don’t think I really realised what I’d done when I was asked before the game, England is all behind us.

‘We noticed it getting to the stadium, with 90,000 behind us, and over the tournament we’ve had amazing support.’

He said: ‘The last few years have been incredible. We have invested really heavily and the Lionesses have taken their opportunity and they have produced something incredible. It’s been an amazing month and an amazing day yesterday.

‘I think it will really turbo charge everything we have been doing in the women’s game. 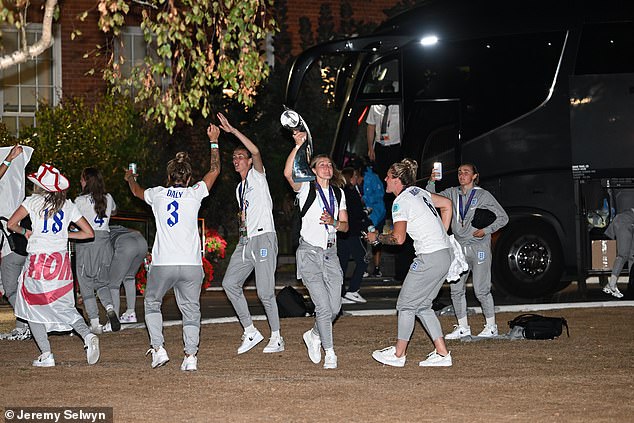 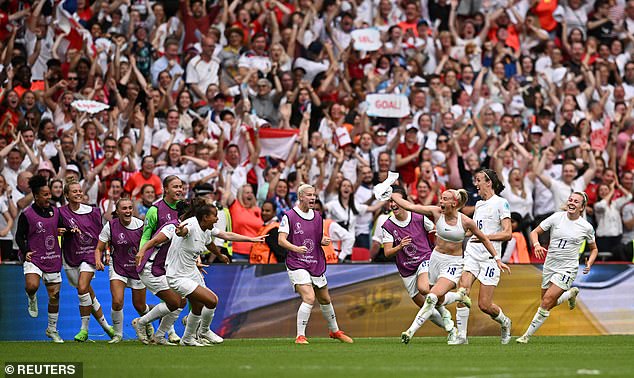 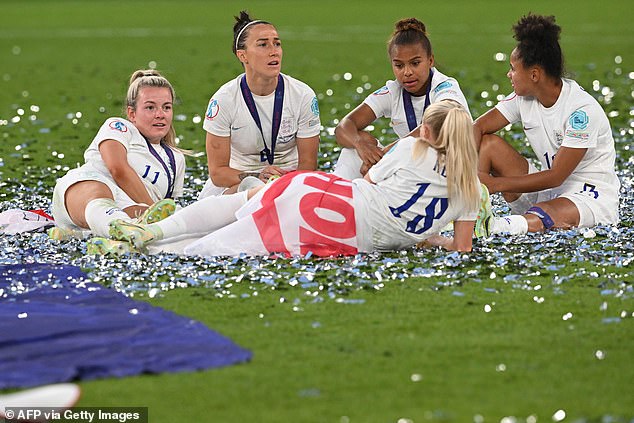 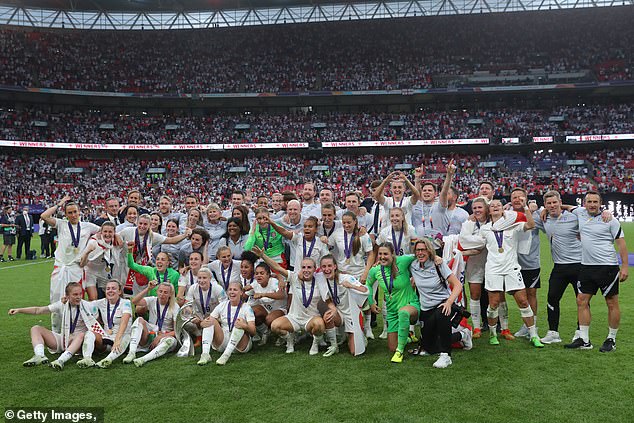 ‘There is no reason why we shouldn’t have the same number of girls playing as boys and it will inspire a whole new generation of players.”

‘We have been preparing for this moment for years. We have got clubs throughout the country ready to take girls on, we have been investing in schools, we have created opportunities for girls to come forward and we are ready and willing to do that.’

But the fact remains that girls do not currently have the same access to football coaching in schools as boys.

Around 72 per cent of primary schools offered equal levels of football coaching among boys and girls las year, but that figure dropped to just 44 per cent in secondary schools, The I reports.

In addition, little more than third of secondary schools offer girls equal access to coaching via clubs outside of school time.

Research from England Football has also found that 91 per cent of girls without access to football in PE at school, want to play it.

Watford and Wales striker Helen Ward said the victory must be seen as a ‘catalyst rather than culmination’.

She told Sky News: ‘ Hopefully there are many young girls not only in England but in Wales watching that and thinking “do you know what? That is something I want to do. I want to be a professional footballer and I want to be playing on the biggest stage.” That is what we have got to take from that.’

Ward added: ‘We can’t just expect that it [increased participation] is going to happen without anymore work. We can’t see this as the culmination and that’s it, that’s the end. We have to build on this, we have to get attendances at domestic football up.

‘Everybody now needs to work together and use this as a catalyst and not stop the hard work.

‘In schools, it needs to be normal that girls play football as much as the boys. I think there needs to be more opportunity. 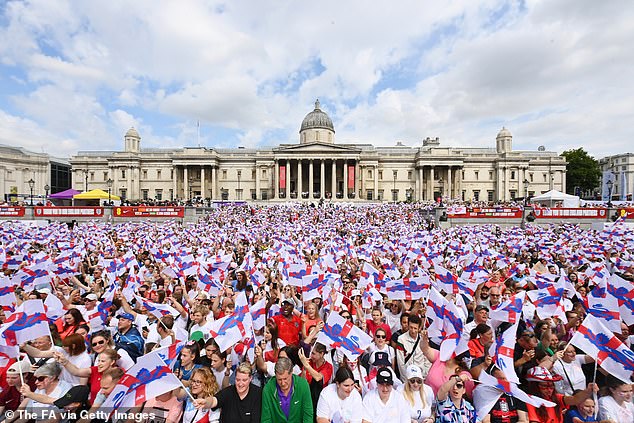 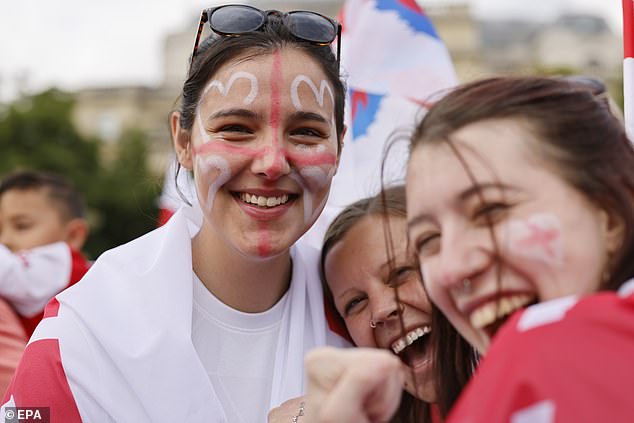 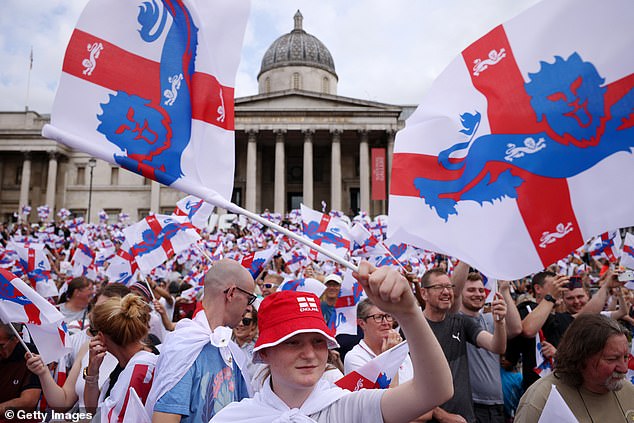 Girls do not currently have the same access to football coaching in schools as boys. according to figures released this week

The government today set out plans to name grassroots football facilities after the 23 players in England’s Euro 2022 squad as part of an aim to build a legacy and increase participation.

The facilities will be named in the players’ hometowns or places that ‘shaped their footballing careers’.

It comes as part of a £230m investment in improving 8,000 grassroots football and multi-sport facilities by 2025, with the ‘stipulation that they must provide access for women’s and girl’s football’.

The government is also launching a review of the domestic women’s game to look at how the sport can be grown both at grassroots and elite levels.

The Women’s World Cup and Euro competitions have now been listed as ‘events of national significance’, meaning they will have greater access to free-to-air television.

Culture Secretary Nadine Dorries said: ‘The Lionesses have enjoyed amazing success in a record breaking tournament – selling out all of their matches, with over half a million fans at games throughout the competition.

‘Millions of women and girls have been inspired by the team’s success and honouring their achievements will mean they leave a lasting impression at grassroots facilities across England.’

Biden hails passing of his $1.9T COVID relief bill through the Senate