Rhode Island fugitive, 34, who faked his own death to escape sex and fraud charges is caught by FBI in Scottish hospital on a ventilator after nearly dying of COVID

An American fugitive who faked his own death to escape fraud and sexual assault charges in the US was finally caught after being admitted to a hospital in Scotland last month with severe symptoms of Covid.

Nicholas Alahverdian, 34, was arrested on an Interpol notice at the Queen Elizabeth University Hospital in Glasgow on December 13 after nearly dying of Covid-19.

He used the name Arthur Knight when detained by Police Scotland but it is believed he has used at least eight different aliases since going on the run in 2018.

Alahverdian, whose also uses the surname Rossi, fled the US in 2018 after DNA linked him to a sex attack in Ohio amid reports of similar offences elsewhere.

According to the Utah County Attorney’s Office, he is accused of fraud and sexual assault charges in at least two states.

An obituary was posted in February 2020 which claimed Alahverdian had died of non-Hodgkin lymphoma and that his last words were ‘fear not and run toward the bliss of the sun’. 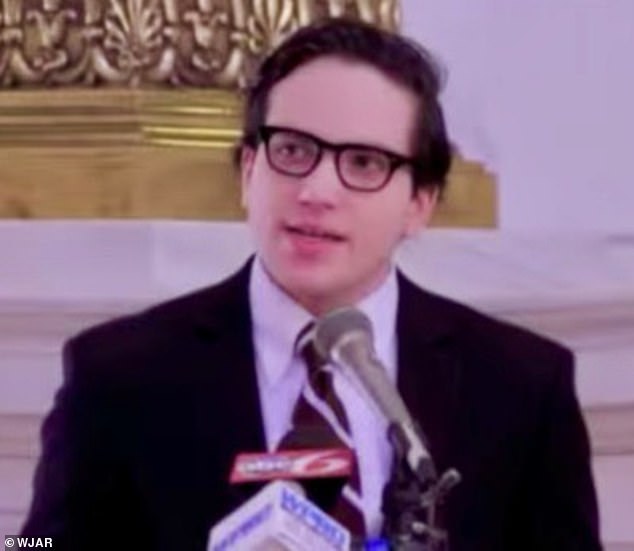 Nicholas Alahverdian , 34, was arrested in December after being admitted to a hospital in Glasgow, Scotland, with severe symptoms of Covid. He had fled the US in 2018 after

But doubts were raised when a person claiming to be his widow insisted his ashes would be scattered at sea and refused to show his death certificate to newspaper The Providence Journal. Alahverdian’s foster mother also recognised the adulatory comments in his obituary to be similar to his writing style.

A year after his purported ‘death’, reports in the US emerged that police did not believe he was dead and were actively hunting him.

He had previously been questioned by the FBI over a credit card fraud allegation.

But he is now subject to extradition proceedings to Utah after DNA led officials to Scotland where he was found in hospital on a ventilator.

In 2008, Alahverdian was convicted of two sexual assault charges in Ohio and in 2017 his DNA from that case was uploaded to a national database.

Prosecutors claim that in 2020, his DNA matched samples from a sexual assault said to have taken place in Utah and discovered he was suspect in a number of other incidents across America.

He also had a live warrant out for his arrest after failing to register as a sex offender in Rhode Island.

Alahverdian is now the subject of extradition proceedings instigated by the Utah County Attorney David Leavitt, who thanked police worldwide including Police Scotland, for finding the wanted man.

He said: ‘Our office is grateful for the significant interagency collaboration of law enforcement to bring this suspect to justice.’

Mr Alahverdian, 34, was arrested on an Interpol notice at the Queen Elizabeth University Hospital in Glasgow on December 13 after nearly dying of Covid-19

An official Utah County Attorney statement added: ‘Investigators also learned that Nicholas Rossi had fled the country to avoid prosecution in Ohio and attempted to lead investigators and state legislators in other states to believe that he was deceased.

‘Through the diligent efforts of SBI Agents, and various investigators in other states and agencies, and in cooperation with the Utah County Attorney’s Office, Mr. Rossi was discovered to be living under an assumed name in Scotland.

‘He has been taken into custody and the Utah County Attorney’s Office is working with federal and international agencies to extradite Mr Rossi back to Utah.’

Rhode Island State Police Major Robert A. Creamer said: ‘He was located in Scotland about a month ago, where he was on a ventilator.’

A Police Scotland spokeswoman said: ‘Officers arrested a 34-year-old man in Glasgow on Monday, December 13, in connection with an international arrest warrant. A report was submitted to the procurator fiscal.’

A Crown Office spokeswoman added: ‘I can confirm that Arthur Knight appeared via video link from QEUH on Thursday 23 December 2021 in relation to extradition proceedings for the US.

‘No future dates have yet been fixed.’

Girl, 15, is gang-raped by up to 33 men in latest horrifying sex attack case in India