Democrat Andrew Gillum has been indicted on multiple federal charges connected to campaign contribution fraud during his 2018 run for governor of Florida.

A federal grand jury has returned a twenty-one count indictment against Gillum, 42.

The Justice Department charges that Gillum and co-defendant Sharon Janet Lettman-Hicks conspired to commit wire fraud, by unlawfully soliciting and obtaining funds from various entities and individuals through fraudulent promises.

The indictment also alleges Gillum and Lettman-Hicks used third parties to divert a portion of those funds to a company owned by Lettman-Hicks, who then fraudulently provided the funds, disguised as payroll payments, to Gillum for his personal use.

He and Lettman-Hicks, 53, have been arrested. They both surrendered to the FBI and are scheduled to have their first court appearance at 2 p.m. Wednesday at the U.S. Courthouse in Tallahassee.

‘I have spent the last 20 years of my life in public service and continue to fight for the people,’ he said in a prepared statement. ‘Every campaign I’ve run has been done with integrity. Make no mistake that this case is not legal, it is political.’ 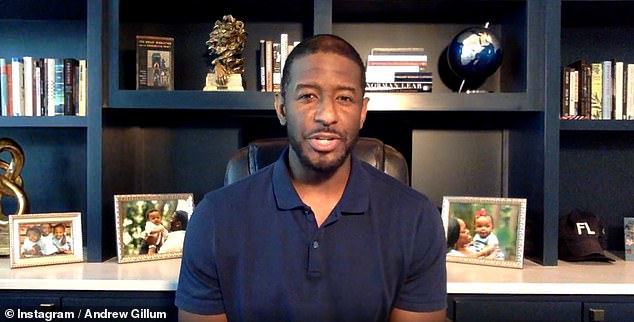 He was serving as mayor of Tallahassee when he ran for govenror in 2018.

He was the first black nominee for governor in Florida’s history but lost the general election to Republican Ron DeSantis, who now serves as governor.

LGBTQ case teacher who ‘manipulated girl, 11, into thinking she’s a boy’ is mom of transgender son