At least 70 percent of Americans are set to experience a severe heatwave that will see temperatures rise above 90F and even reach triple-digits across parts of the Gulf Coast, the Great Lakes and the Mid West on the official first day of summer.

Chicago, Minneapolis, Nashville, Memphis, Dallas, New Orleans and Atlanta are among several cities under excessive heat warnings, with temperatures forecasted to reach higher than 100F, affecting 20 percent of the US population — 67.9million people.

The Twin Cities are seeing its roads cave in under the heat and two areas on I-35 in the Minneapolis area are now closed as of a result, according to Kare11.

‘MSP has just reached 99[F], which is a new daily record (surpassing the old record of 98 set in 1933)! Let’s see if we can hit 100,’ the National Weather Service Twin Cities tweeted on Monday. The heat index in the area reached a high of 105F that day.

As of Monday at 5 p.m., when temperatures are at their highest, weather in Minneapolis will be 89F, while Chicago will bear the brunt of 93F weather. Weather in Nashville and Phoenix will respectively reach 101F and 108F, while temperatures in Memphis, New Orleans, Atlanta and Dallas will range between 90F-100F. 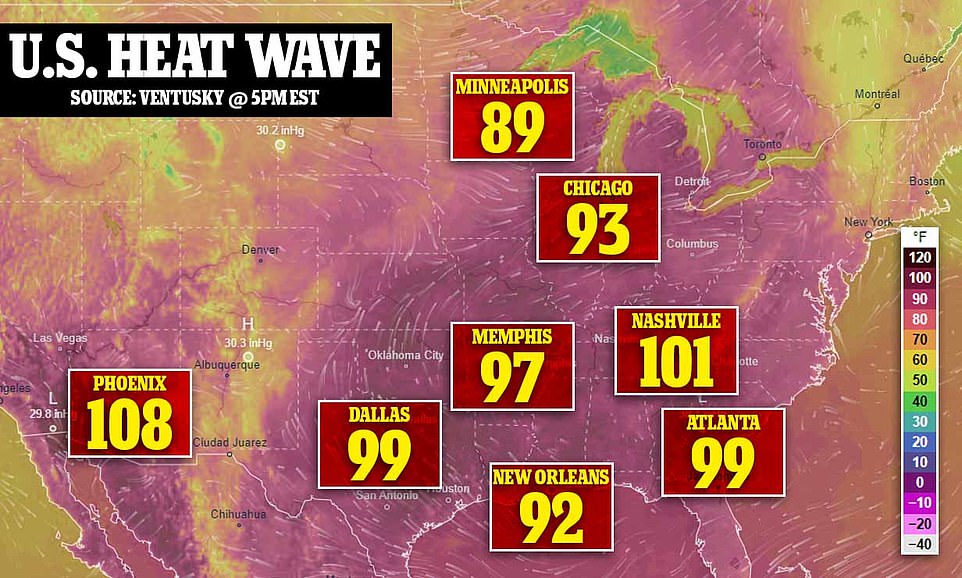 When temperatures are at their highest at 5p.m. on Monday, weather in Minneapolis will be 89F, while Chicago will bear the brunt of 93F weather. Nashville and Phoenix will respectively reach 101F and 108F, while temperatures in Memphis, New Orleans, Atlanta and Dallas will range between 90F-100F 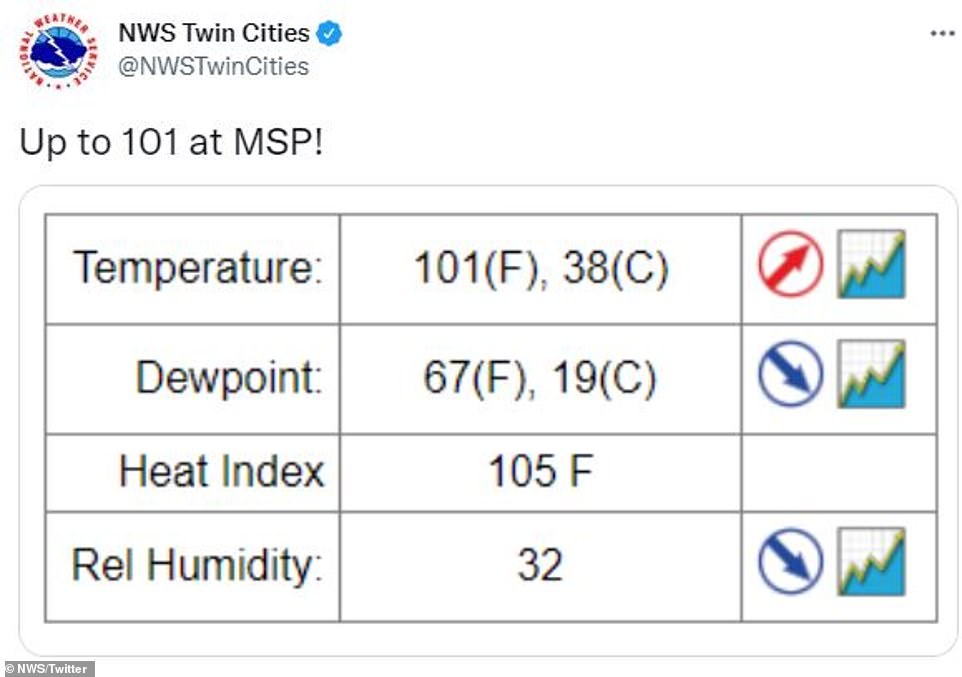 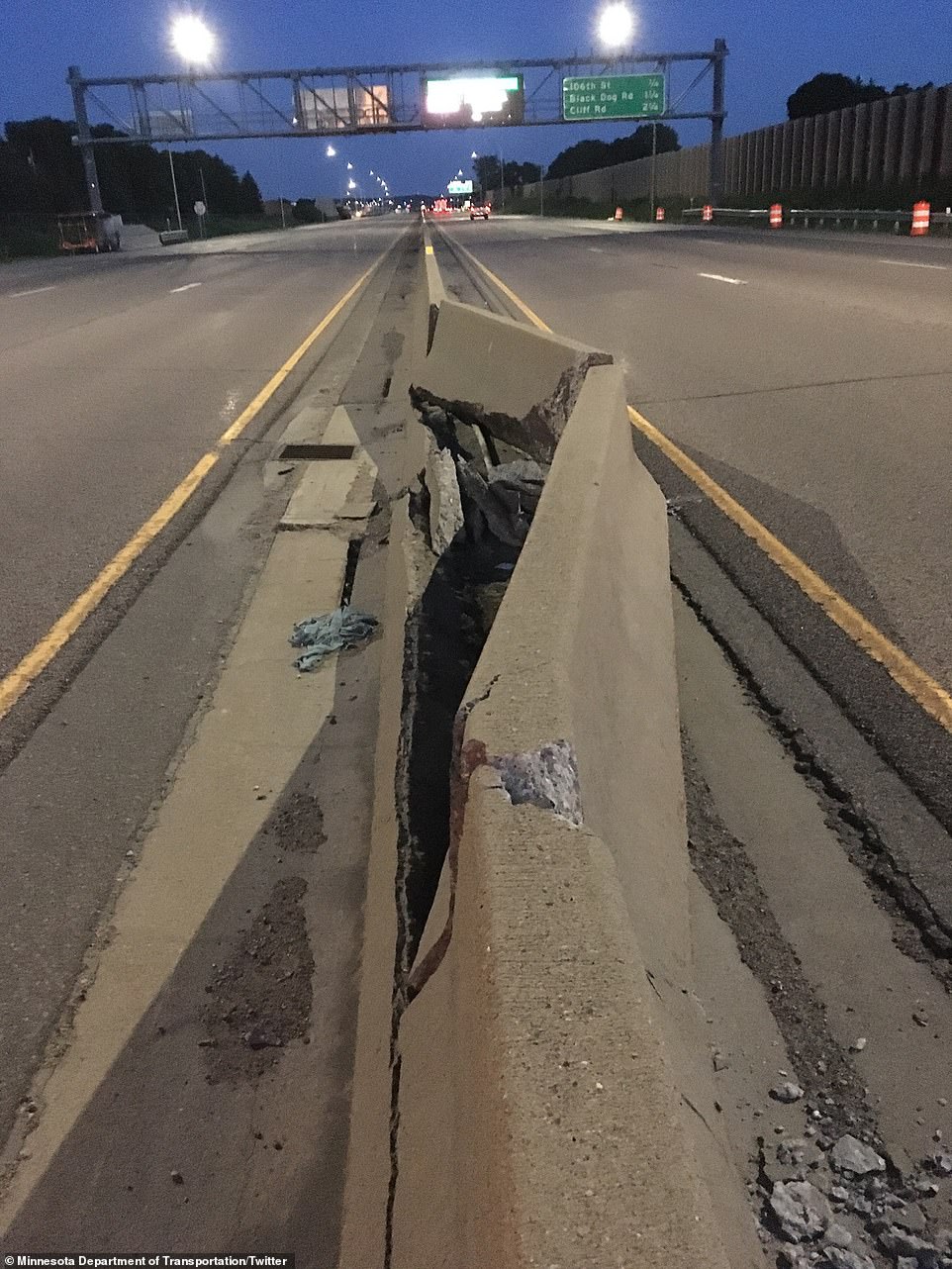 Roads in Minnesota’s capital are starting to crumple under the excessive heat, creating dangerous hazards for drivers 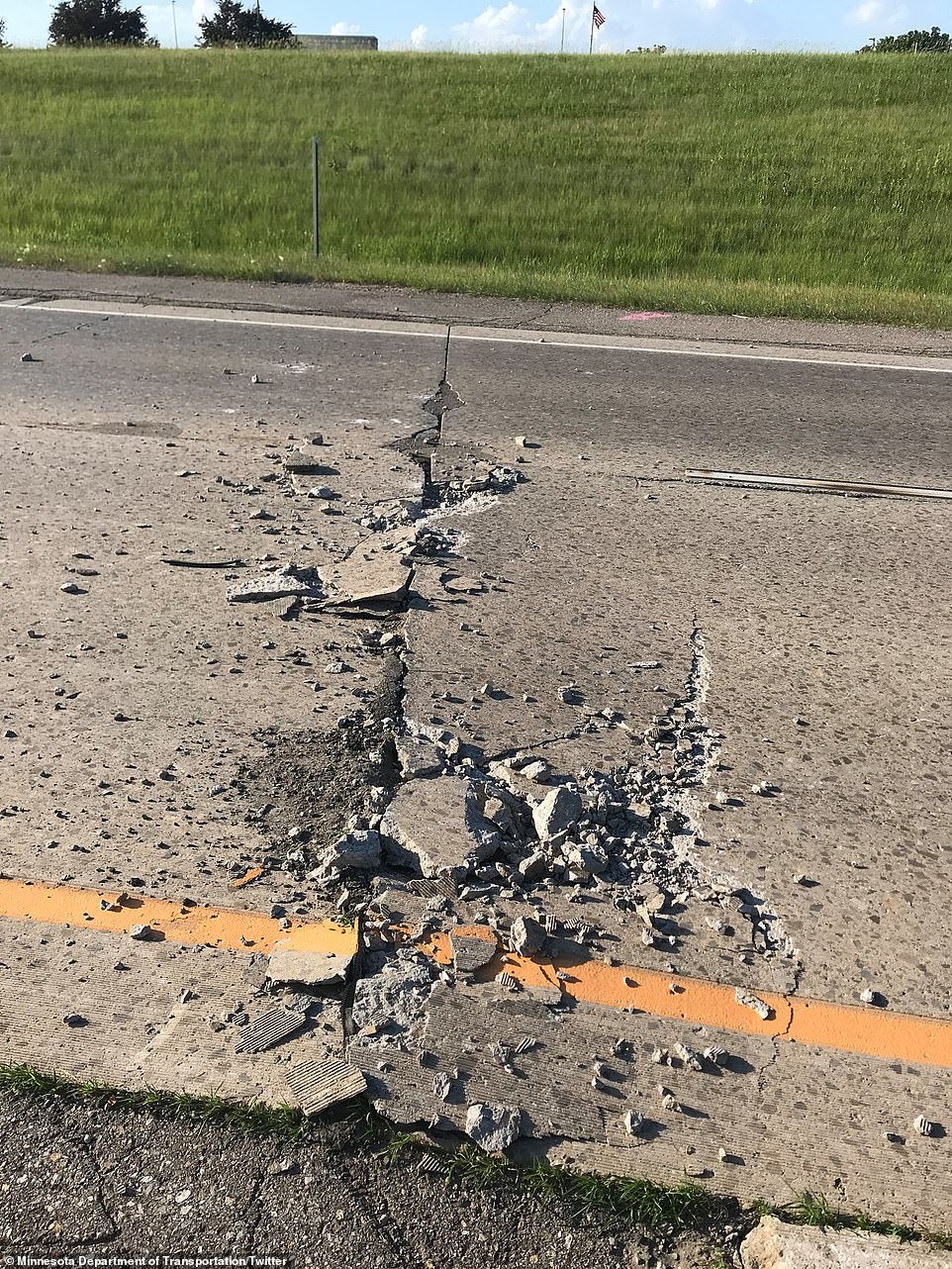 The Minnesota Department of Transportation shared several pictures of parts of I-35 caving in (pictured). The Interstate travels all the way up to Minnesota from border town Laredo, Texas

People flocked to pools, beaches and cooling centers across the Midwest and South spanning from northern Florida to the Great Lakes last week as a heat wave pushed temperatures into the 90s and beyond and may have caused the deaths of at least two people.

Certain parts of the country, including New Orleans and Mobile, Alabama, reached record-breaking highs over the week-end, surpassing 97F and 100F respectively on Saturday — breaking the 1913 record of 100F in Mobile.

The National Weather Service urged caution for more than nine million people in eight states that were listed under heat alerts on Monday morning, mostly in the northern and western part of the country, such as Minnesota, Iowa, North Dakota, South Dakota, Michigan, Wisconsin, Nebraska and Kansas.

Last week, The Kansas Department of Health and Environment knew of at least 2,000 cattle deaths due to high temperatures and humidity. The deaths represent a huge economic loss because the animals, which typically weigh around 1,500 pounds, are worth around $2,000 per head, spokeswoman for the Kansas Livestock Association Scarlett Hagins said.

Federal disaster programs will help some producers who incurred a loss, she added. 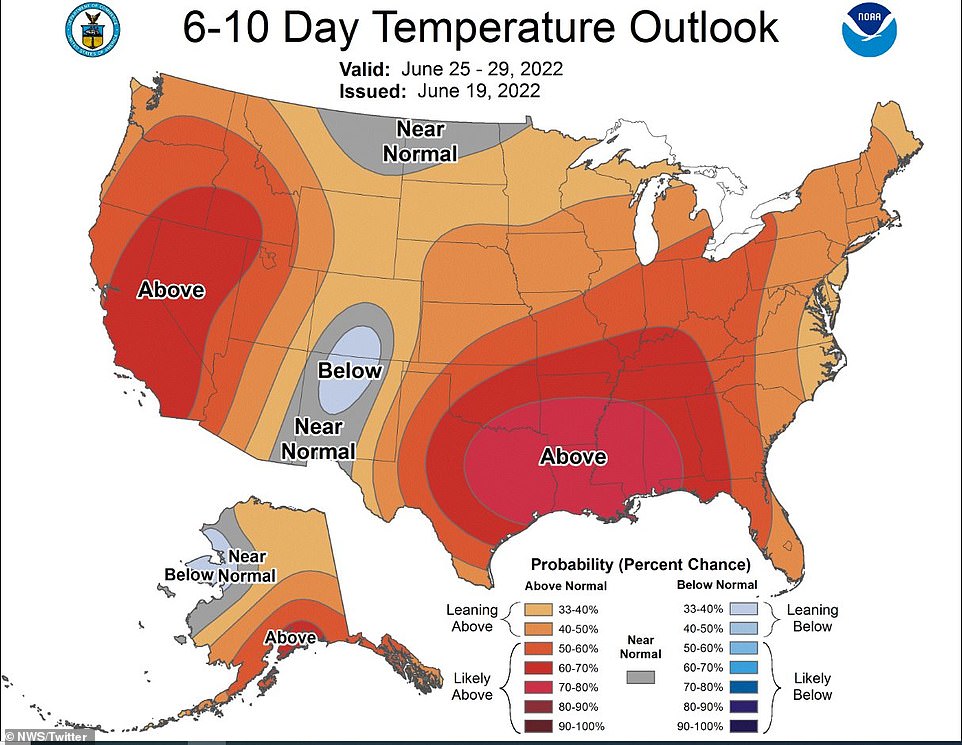 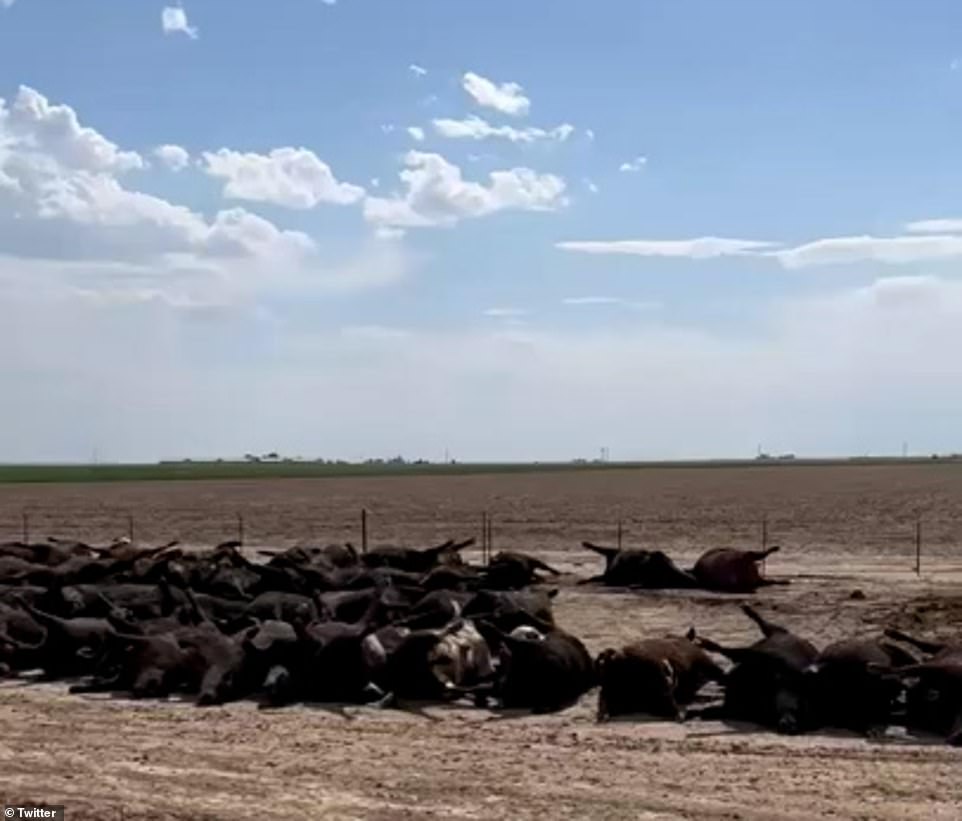 Last weeks, temperature readings reported for Kansas began to exceed the 100-degree mark, killing thousands of cattle in the area

Electric companies in the Southeast said they were ready to tackle the second heat wave this week in affected areas as more people are expected to stay indoors and blast their air conditioners.

‘This is our ‘Super Bowl’ that we prepare all year for. We are ready to go!’ Tennessee Valley Authority Spokesman Scott Fiedler told CNN in a statement.

Entergy, a power supplier mostly present in states bordering the Gulf of Mexico, said it expects in increase in power in areas across Arkansas, Louisiana, Mississippi, New Orleans, and Texas, and expects to reach unprecedented energy levels.

Preparing for extreme heat is a process that goes on year-round at Oncor — the largest electric utility company in Texas and the fifth in the entire country. It serves more than 10million Texans.

‘Our maintenance strategy department starts looking at data analytics and analyzing areas of vulnerability that we could really be focusing on for summer prep,’ said Senior Design Manager and former Assistant District Manager Elizabeth Barrett on the company’s website. 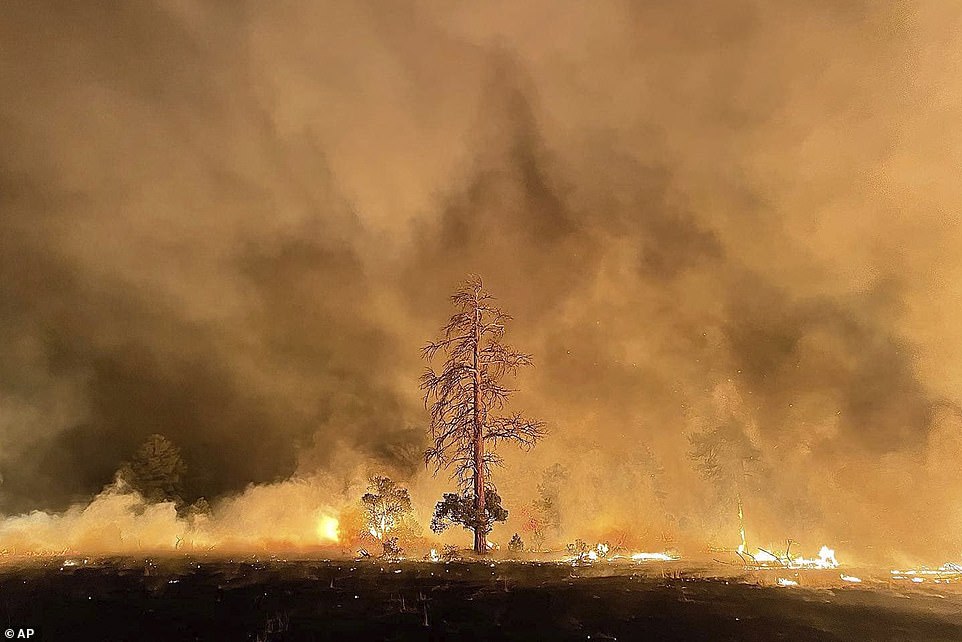 Wildfires have also recently emerged in the southwest, mostly in Arizona throughout the last two weeks. Pictured: A wildfire moving through grass, brush and pine trees on the northern outskirts of Flagstaff, Arizona on June 15 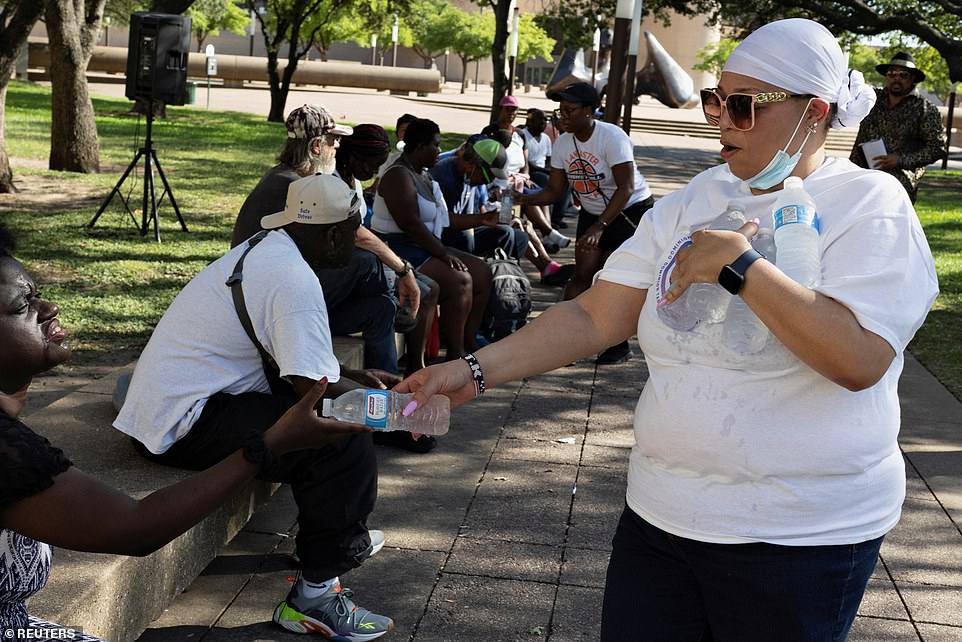 A volunteer gives out cold water bottles to a homeless community during a heatwave with expected temperatures of 102 F (39 C) in Dallas, Texas, last week 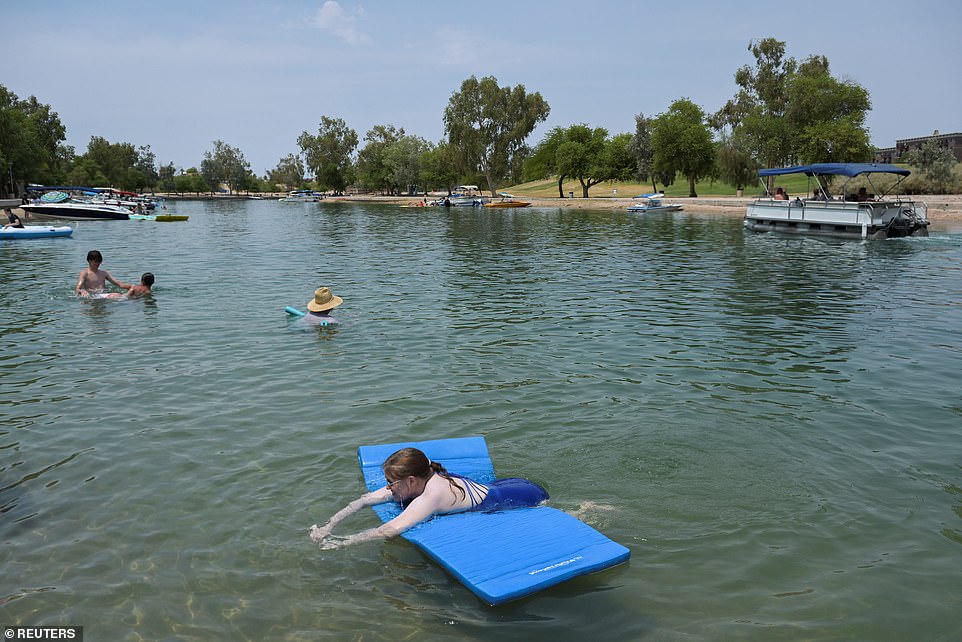 People cooling off in the water during a heat wave in Lake Havasu, Arizona, last week as temperatures there are well above triple-digits

And the worst may be yet to come. Nighttime temperatures have been hotter than previous years as conditions are expected to be around 100F, not providing much of a relief for a good night’s sleep.

The heatwave succeeds wide-ranging weather conditions across the counties last week, which saw millions of people struck by triple-digit temperatures and historic flooding in Yellowstone National Park, Wyoming and Montana.

Wildfires have also taken place in Arizona and New Mexico, where conditions in the Phoenix are closer to 110F than 100F. A mixture of severe heat, rain and storms in Ohio also saw many residents lose power last week.

About a 250,000 AEP Ohio customers, a local power company, were without power last Tuesday, according to company data.

Around 169,000 affected customers lived in the Columbus area.

Museums must present a ’rounded’ view of Britain’s colonial past, minsters warn

Inside the Swiss assisted suicide clinic where US sisters paid $11,000 each to die