Attorney General Merrick Garland made an unannounced visit to the Ukraine on Wednesday where he met with the nation’s top prosecutor to discuss Russian war crimes.

Garland sat down Ukrainian Prosecutor General Iryna Venediktova ‘to discuss U.S. and international efforts to help Ukraine identify, apprehend, and prosecute those individuals involved in war crimes and other atrocities in Ukraine,’ the Justice Department said in a statement.

Garland made the stop as part of a previously scheduled trip to Paris and Warsaw.

‘I’m here to express the unwavering support to the United States for the people of Ukraine, in the midst of the unprovoked and unjust Russian invasion,’ he told reporters upon his arrival.

‘I’m here to continue our discussions between myself and the prosecutor general about the actions that the United States is taking to assist the Ukrainian authorities and holding accountable those responsible for the atrocities for the war crimes that the entire world has seen.

‘The United States is sending an unmistakable message, there is no place to hide. We and our partners will pursue every avenue available to make sure that those who are responsible for these atrocities are held accountable,’ he noted.

During the trip, Garland announced the launch of a War Crimes Accountability Team  to hold accountable those who have committed war crimes and other atrocities in Ukraine.

One role the team will play is looking into potential war crimes over which the U.S. possesses jurisdiction, such as the killing and wounding of U.S. journalists covering the war in Ukraine.

He and Venediktova met in Washington D.C. in May. Garland and FBI director Christopher Wray have said they are working with Ukraine to prosecute war crimes. 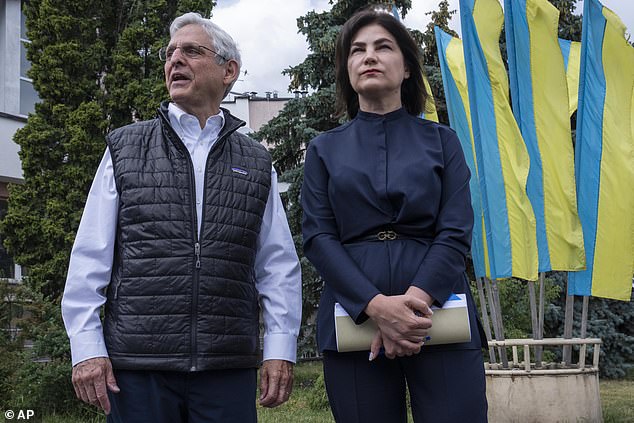 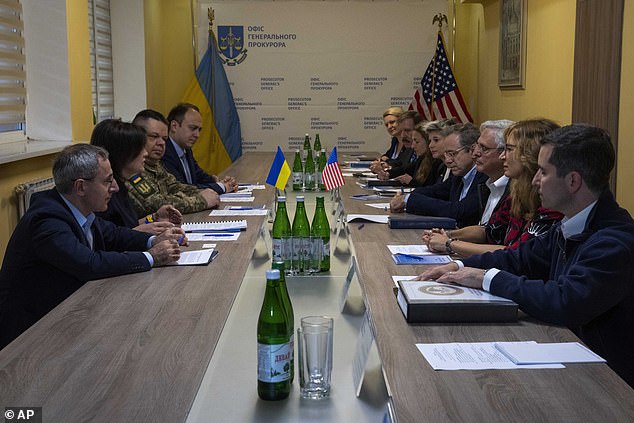 The two top prosecutors met for about an hour in Krakovets, on the Ukraine border with Poland.

They discussed technical, forensic and legal support that Garland’s Justice Department might be able to provide prosecutors in Ukraine, department officials told The New York Times.

Garland is the latest Biden administration official to visit the wartorn country since Russian President Vladimir Putin launched his invasion in February.

In April, Biden called Putin a ‘war criminal’ and said he should be held accountable for his actions in the Ukraine.

‘He is a war criminal,’ Biden said of Putin after reports of the mass murder of civilians by Russian-controlled troops in the town of Bucha, Ukraine.

Bucha’s mayor has said about 300 residents of the town had been killed at the time that Russian fighters controlled the area.

‘This guy is brutal, and what’s happening in Bucha is outrageous and everyone’s seen it,’ Biden said.

‘I think it is a war crime. … He should be held accountable,’ the president said.

Biden has yet to make a trip to Ukraine.

He said on Monday he won’t be making a stop there during his upcoming trip to Europe but he said he talks to President Volodymyr Zelensky three or four times a week.

Biden leaves on Saturday for a G7 meeting in Germany and then heads to a NATO summit in Spain.

‘On this trip, not likely,’ he said when asked if he’ll travel to the Ukraine.

He said a visit to Kyiv depends on ‘whether or not it causes more difficulty for the Ukrainians, whether it distracts from what’s going on.’

‘I have been meeting with Zelensky – I talk to him three, four times a week,’ he told reporters during a walk on the beach in Rehoboth, where he is spending Father’s Day weekend with his family.

Biden and Japanese Prime Minister Katsura Tarō are the only two G7 leaders who haven’t visited Zelensky in Kyiv.

The leaders of France, Germany and Italy made a joint trip there last week to meet with Zelensky as Ukraine has submitted its application to join the EU. The three head the European Union’s three largest economies and said they backed Ukraine’s candidacy to join the 27-member bloc. 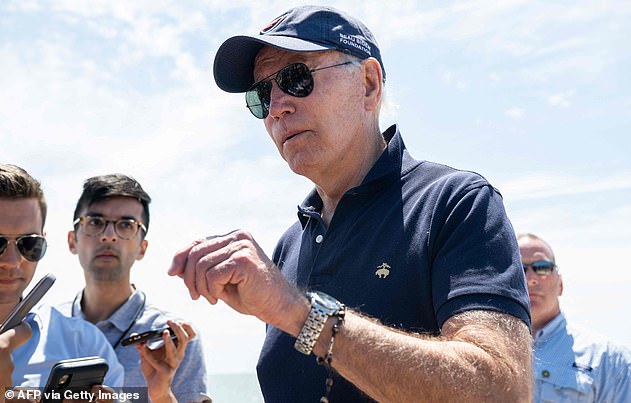 The EU will debate the matter at its summit next week. Ukraine needs approval from all 27 member nations in order to be approved.

Biden said he expected Ukraine’s application to join the EU to be approved.

‘I think that’s very likely to happen,’ he said.

Blackpool father, 56, died choking on heroin and crack after police pulled him over, inquest hears

Allow asylum seekers to work in bid to solve the recruitment crisis, Priti Patel is urged