Russian pilots fighting in Ukraine are taping basic GPS devices to their dashboards because they cannot rely on their fighter jets’ inbuilt navigation systems, Britain’s defence minister has revealed.

Speaking on Monday, Ben Wallace painted a picture of a Russian army that is under-equipped for its on-going war in Ukraine that is now in its 11th week.

He said Russia has failed on multiple fronts, and outlined a ‘charge sheet’ that should be ‘laid at the feet’ of Moscow’s generals, including poor preparation and planning, inadequate equipment and support, and moral corruption.

He said that downed fighter jets have often been found with paper maps that date back to the 1980s, despite Moscow parading its supposed next-generation equipment on Monday to mark Russia’s ‘Victory Day’ on May 9.

‘Almost none of their vehicles contain situational awareness and digital battle management,’ Mr Wallace said during a speech at London’s National Army Museum. ‘Vehicles are frequently found with 1980s paper maps of Ukraine in them.’

‘GPS receivers have been found taped to the dashboards of downed Russian SU-34s so the pilots knew where they were, due to the poor quality of their own systems.’ 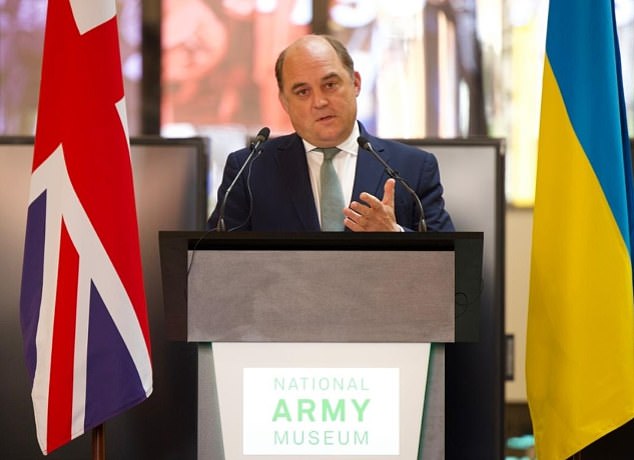 SU-34s are Soviet-era fighter jets that have been used since the 1990s – several of which have been shot down in Ukraine, according to reports.

‘The result is that whilst Russia have large amounts of artillery and armour that they like parading, they are unable to leverage them for combined arms manoeuvre and just resort to mass indiscriminate barrages,’ Mr Wallace added.

‘Their limited stockpiles of air-delivered precision weapons, demonstrated by a steep drop off in use after the second week, has meant that the Air Force has also fallen back on dropping imprecise dumb munitions on urban areas.’

It has been widely reported that Putin was expecting his forces to rapidly advance across Ukraine and overthrow the country’s elected government within days.

Instead, his forces have been drawn into a protracted conflict – which is showing no signs of abating. Ukraine is being supplied by its Western allies, and intelligence updates have suggested Moscow’s armies are running low on equipment.

After unexpectedly fierce resistance forced the Kremlin to abandon its effort to storm Kyiv over a month ago, Moscow’s forces have concentrated on capturing the Donbas, Ukraine’s eastern industrial region.

But the fighting there has been a back-and-forth, village-by-village slog. 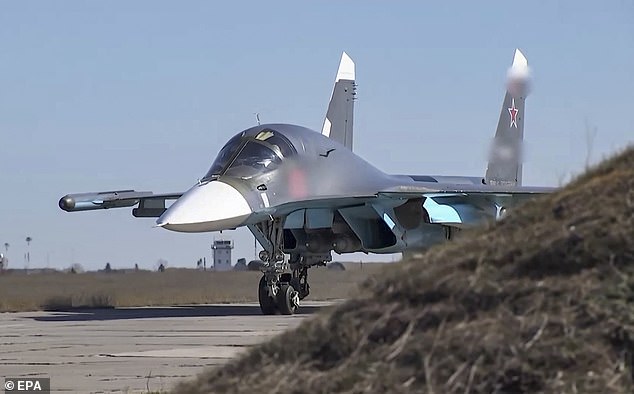 Mr Wallace said: ‘GPS receivers have been found taped to the dashboards of downed Russian SU-34s so the pilots knew where they were, due to the poor quality of their own systems.’ Pictured: A Russian Soviet-era SU-24 fighter jet, seen on April 20, 2022 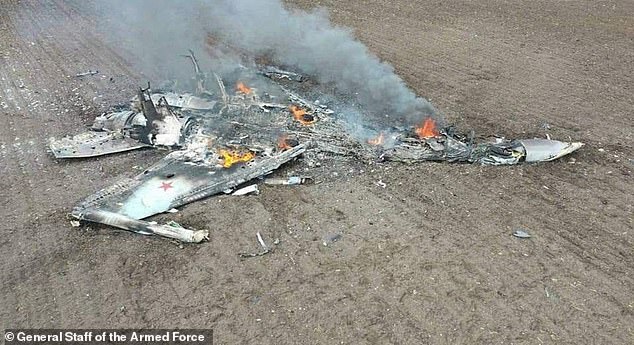 This handout picture released by the General Staff of the Armed Forces of Ukraine on April 3, 2022 shows the burning wreckage of a downed Russian fighter jet in the Kharkiv region. Mr Wallace said Ukraine’s forces have found 1980s paper maps in downed Russian planes

Putin marked his country’s biggest patriotic holiday Monday without a major new battlefield success in Ukraine to boast of.

The Russian leader oversaw a Victory Day parade on Moscow’s Red Square, watching as troops marched in formation and military hardware rolled past in a celebration of the Soviet Union’s role in the 1945 defeat of Nazi Germany.

While Western analysts in recent weeks had widely expected Putin to use the holiday to trumpet some kind of victory in Ukraine or announce an escalation, he did neither. Instead, he sought to justify the war again as a necessary response to what he portrayed as a hostile Ukraine.

‘The danger was rising by the day,’ Putin said. ‘Russia has given a preemptive response to aggression. It was forced, timely and the only correct decision.’

He steered clear of battlefield specifics, failing to mention the potentially pivotal battle for the vital southern port of Mariupol and not even uttering the word ‘Ukraine.’

Mr Wallace accused Putin and his ‘utterly complicit’ generals of ‘hijacking’ the memory of Russian troops repelling the Nazis in the Second World War. 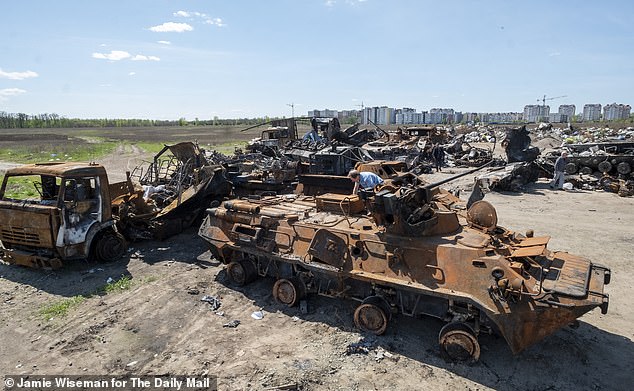 Pictured: The twisted metal of destroyed Russian tanks is seen in a tank graveyard in Bucha

He also swiped that the dictator had already suffered a long-term defeat because his precision weapons are running out and he will not be able to restock.

In Moscow, Putin claimed that his attack on Russia’s neighbour was necessary to ward off ‘an absolutely unacceptable threat just next to our borders’.

He reportedly added at the Victory Day celebrations that the West has been ‘preparing for the invasion of our land, including Crimea’.

But, asked by journalists after a speech at London’s National Army Museum in Chelsea, south-west London, Mr Wallace bluntly denied that NATO and western allies have ever planned to attack Russia.

‘President Putin has made a number of fairy-tale claims for months and years now,’ the Cabinet minister said.

‘If it wasn’t so tragic it would be amusing, but it isn’t.

‘One of his claims is that he is surrounded. NATO accounts for 6% of his land border. That’s not being surrounded if only 6 per cent of your land border is NATO countries.

‘I think he is believing what he wants to believe – a slight shine of desperation. But let me put on the record categorically: NATO, Britain, eastern Europe is not planning to invade Russia and never has done.’

Mr Wallace accused the Russian regime of ‘mirroring (the) fascism and tyranny’ of Nazi Germany as the Moscow parade to celebrate the 1945 victory over Hitler’s forces was under way.

The Defence Secretary also said Russian suffering was used under the Soviets ‘as it is now, to cover up the inadequacy of those ruling in safety and comfort from behind the Kremlin walls’.

‘Fear and sycophancy dictated behaviours then, and today’s Russian armed forces still carry that Soviet imprint – the imprint of amorality and corruption,’ he said.

‘They are the ones who truly insult the memory of the Immortal Regiment. So let’s call out the absurdity of Russian generals resplendent in their manicured parade uniforms, weighed down by the gold braid and glistening metals. 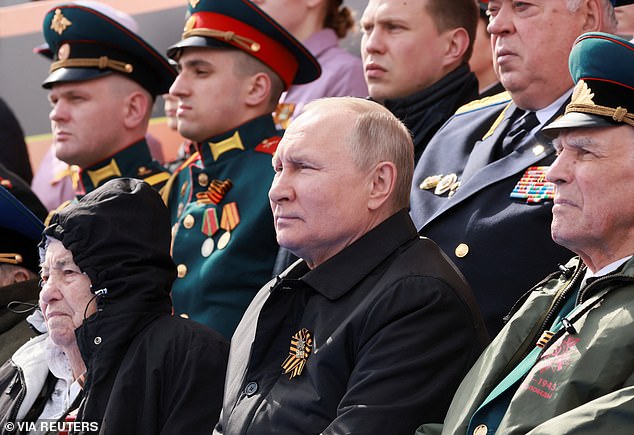 Russian President Vladimir Putin watches a military parade on Victory Day, which marks the 77th anniversary of the victory over Nazi Germany in World War Two, in Red Square in central Moscow, Russia May 9, 2022 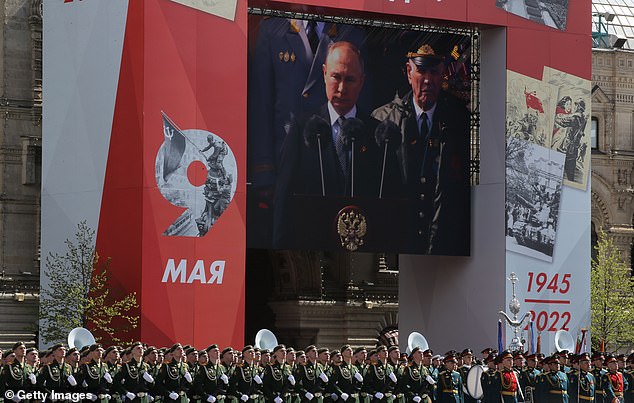 In his speech, Putin steered clear of battlefield specifics, failing to mention the potentially pivotal battle for the vital southern port of Mariupol and not even uttering the word ‘Ukraine’

‘They are utterly complicit in Putin’s hijacking of their forebears’ proud history of defending against the ruthless invasion, of repelling fascism and sacrificing themselves for higher purpose.

‘And now they are the ones inflicting needless suffering in the service of lowly gangsterism and for them, and for Putin, there can be no victory day, only dishonour and surely defeat in Ukraine.’

Responding to questions from the media after the speech Mr Wallace said: ‘He (Vladimir Putin) is running out of his precision stock fairly quickly.

‘You know, that’s the lesson for us all. I mean, we mustn’t forget that they are showing us lessons, sadly at the expense of what’s happening Ukraine.

‘We all have highly complex weapons that, funny enough, don’t take a couple of days to replace, it can take months.

‘Once you fire them all in the way Russia has done, they have a real challenge and I think in the long term my point about ‘has Putin already won or lost in the long run’, you know, Putin trying to refurbish that armed forces is going to be incredibly hard. A lot of the components come from the West, he won’t be able to get hold of those.’

Mr Wallace’s speech came after Foreign Secretary Liz Truss accused Russia of war crimes over the bombing of a school in eastern Ukraine where civilians were sheltering.

Up to 60 are feared dead after the school in Bilohorivka in the Luhansk region of eastern Ukraine was bombed and caught fire on Saturday.

Weapons and explosives discovered at a 72-year-old man’s property in Cairns, Queensland