Republicans are fighting back against Democrats’ plans to bolster IRS enforcement to bring in revenue to pay for their Inflation Reduction Act spending bill.

Tucked into the $433 billion reconciliation deal reached between Democratic Leader Chuck Schumer and key moderate Democrat Sen. Joe Manchin is $80 billion  over 10 years to expand the IRS and ensure Americans are paying their fair share in taxes.

According to the Congressional Budget Office the beefed-up enforcement would bring in net $127 billion over 10 years.

Dubbed the Inflation Reduction Act, Democrats hope to push through the bill without any Republican votes next month.  It involves at least $260 billion in new spending over 10 years, and would also raise taxes by $326 billion over that time period, according to an analysis from the nonpartisan Joint Committee on Taxation.

The deal, which would include $433 billion in government spending on climate and health programs, would finally give President Biden and Democrats a major policy win ahead of the midterm elections.

Democrats plan to enforce existing laws and close loopholes and set a corporate minimum tax to raise funds for the bill. Republicans, however, are sounding the alarm on giving more funding to the IRS. 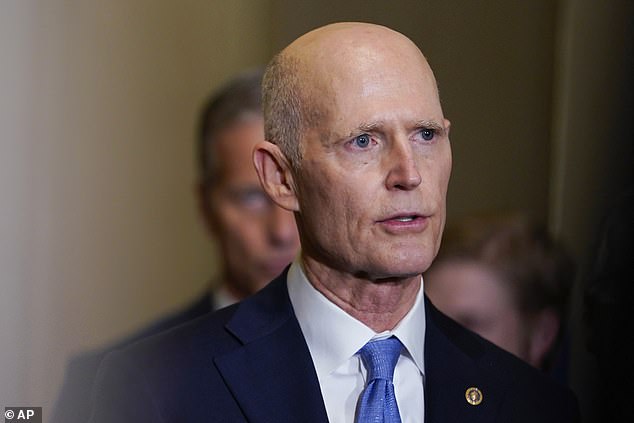 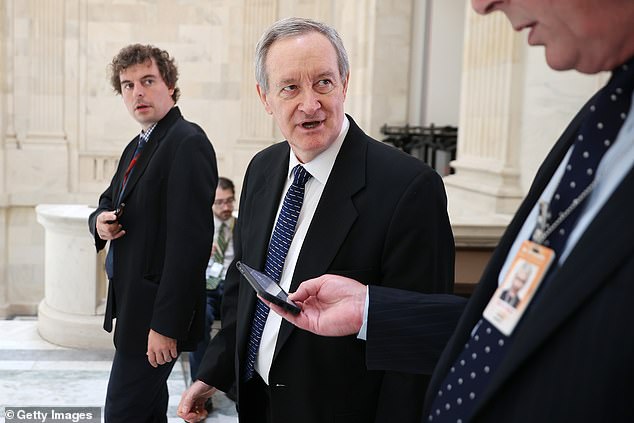 Sen. Mike Crapo, ranking member on the Senate Banking Committee, said in a press release this week that it was a ‘myth’ that the additional funding would allow the IRS to crack down on wealthy tax cheats and corporations not paying their fair share

Sen. John Thune, R-S.D., member of the Senate Banking Subcommittee, said that too much funding was going toward enforcement and not enough toward customer service.

‘This is an agency that only succeeded in answering about one out of every 50 phone calls during the 2021 tax season,’ Thune said on the Senate floor. ‘Yet four percent of the $80 billion is going to taxpayer services — 57 percent goes to enforcement, so that the IRS can spend more time harassing taxpayers around this country.’

Sen. Mike Crapo, ranking member on the Senate Banking Committee, said in a press release this week that it was a ‘myth’ that the additional funding would allow the IRS to crack down on wealthy tax cheats and corporations not paying their fair share.

‘The brunt of any new revenue from hiring an army of IRS auditors will overwhelming hit low- and middle-income earners, people already struggling with high gas prices and 9.1 percent inflation,’ he said.

The Treasury Department has asserted the opposite – that the vast majority of unreported income comes from those making over $100,000.

‘Referring to all tax gap and misreporting numbers as arising from ‘tax cheats’ is misdirection, as significant amounts arise from hard-working taxpayers simply struggling to comply with an overly complex tax code, which will become even more complex if the latest tax-and-spend bill becomes law,’ Crapo said.

Marc Goldwein, an economist with the Committee for a Responsible Federal Budget, argued that enhancing enforcement has historically been a bipartisan priority.

The White House touted a statement from three ex-IRS commissioners endorsing the provisions and ‘Debunk Lies About Increased Enforcement Affecting Anyone but Rich Tax Cheats’:

‘As former IRS commissioners, we have watched the agency closely over the years, and understand far too well that the status quo is not tenable: The IRS has a workforce that has shrunk to 1970s levels with technological infrastructure that is decades out-of-date and an audit rate that has dropped by 50 percent. The sustained, multi-year funding contained in the reconciliation package is critical to help the agency rebuild.’

‘This bill is about getting to the heart of the problem’ write Fred Goldberg, Charles Rossotti and John Koskinen, ‘and pursuing high-end taxpayers and corporations who today illegally evade their tax obligations.’

The IRS has a workforce that has shrunk to 1970s levels with technological infrastructure that is decades out-of-date and an audit rate that has dropped by 50 percent.

Republicans have said that the bill would actually increase historically high inflation, and flies in the face of President Biden’s promise not to raise taxes on anyone making less than $400,000.

Central to the bill’s tax provisions is a 15 percent corporate minimum tax on the 200 or so businesses that bring in over $1 billion per year, which is projected to raise $313 in revenue over 10 years.

Republicans have predicted the increase will be passed onto workers who will make less or consumers who will pay more, not shareholders.

The Joint Committee on Taxation found that low- and middle-income households could pay an additional $16.7 billion in taxes next year as a result of the bill.

But the White House has noted that that estimate does not factor in increased benefits and tax credits for these households.

‘Once you account for the spending side and the other taxes that are left out — and that includes the household consumer tax credits for various energy things, lower drug prices and health-care subsidies — the middle class is going to be distributionally ahead,’ said Goldwein, according to Bloomberg Tax.