President Joe Biden will appear at a high-dollar fundraiser alongside Illinois Gov. J.B. Pritzker Wednesday night, with supporters paying $365,000 to be a ‘sponsor’ of the Chicago event.

The Chicago Sun-Times obtained a copy of the invitation to the event, which also guaranteed a photo and a ‘clutch,’ a small meeting, with the president, to those who donated more than $100,000 to attend.

The money goes to the Democratic National Committee’s Grassroots Victory Fund, a political action committee that feeds money to the DNC and the state parties and helps get Democrats elected to Congress. 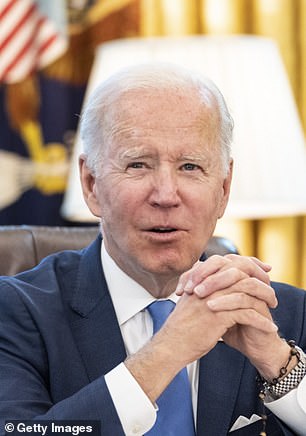 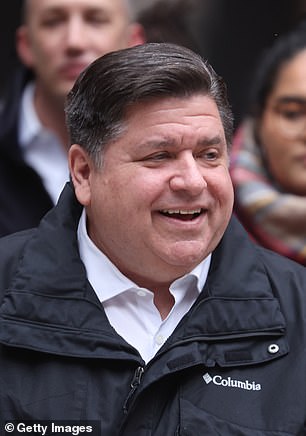 President Joe Biden (left) will appear at a high-dollar fundraiser Wednesday night in Chicago alongside Illinois’ Democratic Gov. J.B. Pritzker (right), as he’s started to raise funds in recent weeks for the midterms. ‘Sponsor’ level tickets for the Chicago event are priced at $375,000

Wednesday’s event is just the latest for Biden, who has started fundraising for the 2022 midterms in earnest.

Last month, he headlined two back-to-back fundraisers in Portland, Oregon and Seattle, Washington – which marked the first time he used Air Force One to travel to raise dollars.

And then on Monday night, Biden motorcaded to the tony D.C. suburb of Potomac, Maryland for a DNC fundraiser at the home of Rep. David Trone, a Maryland Democrat who co-founded the Total Wine stores.

There, Biden suggested there were a handful of Republican Senate seats Democrats could flip in the fall midterms.

‘I think there are at least four seats that are up for grabs that we could take in the Senate,’ the president said.

During his western fundraising swing last month, Biden floated that at least two GOP-held Senate seats could be won by Democrats.

Biden didn’t name which states should be targeted.

During the Potomac fundraiser, he encouraged Democrats to call out the Republicans for not having plans to tackle some of the nation’s biggest issues.

‘Tell me anything they are for as a party?’ Biden mused. ‘There’s good Republicans,’ he added, ‘but today if you look at the leaders of the Republican Party, what is their agenda? It’s not a conservative agenda.’

In Oregon, Biden told supporters that one problem Democrats have is that voters don’t know all that the party has done for them.

‘We’ve done one hell of a job,’ the president expressed, but ‘because things have moved so rapidly, so profoundly … they don’t know a lot about what we’ve already done.’

He cited some statistics like the creation of 7.9 million jobs, including 430,000 manufacturing jobs, a shrinking unemployment rate and deficit reduction.

At the same time, Biden hasn’t been able to get inflation under control.

Currently, his 41.8 per cent approval rating is close to his all-time low, according to FiveThirtyEight.

Polls and historical precedent suggest the Democrats could be in for a beating this fall and lose control of their narrow majorities in both the House and the Senate.

But the Senate looks more optimistic for the party, with key candidates outraising their Republican counterparts.

And the leaked draft of the Roe v. Wade opinion has lit a fire under party members, who believe the Democratic base will be more motivated to vote if abortion rights are being dismantled.

‘Top Biden advisers say that since the leak of the court’s draft Roe decision, they have seen a surge in engagement, anger and enthusiasm from their base voters,’ Bloomberg News reported Sunday.