President Joe Biden spoke directly about the motivating power of the leaked Supreme Court decision that would overturn Roe v. Wade as well as Jan. 6th as he told top donors about his plan to push back ‘ultra MAGA’ Republicans.

‘It has the potential to generate significant enthusiasm to get out and vote,’ Biden said of the leaked opinion, which has galvanized people on both sides of the abortion debate.

‘It also has enormous potential if we fail what that will mean,’ he warned.

But he cautioned: ‘Understand that if we miss what’s at stake.’ Biden warned if Democrats lose power: ‘we’ve got a different world we’re in.’

He spoke in emotional language about the pain of women over the issue.

He mentioned ‘not only the brutality, of taking away a woman’s right to control her own body, at all damage, physically, psychologically, practically.’

But also the risks that other rights such as gay rights and contraception are at stake, Biden said.

Biden joked that ‘locusts landed on my desk,’ in reference to what he has faced. 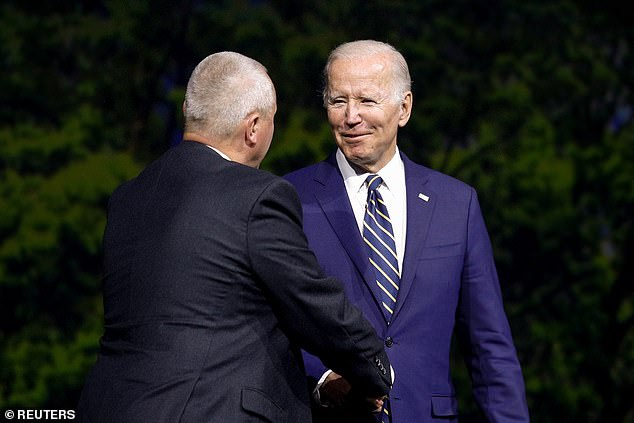 Biden joked that ‘locusts landed on my desk,’ in reference to what he has faced. He said the party would gain seats, but warned inflation was a danger

‘We can’t let this happen guys. And it’s going to be hard. Because inflation is going to scare the living hell out of everybody.

He made a bold prediction about Democratic prospects in 2022.

‘I think we can pick up three Senate seats and I think we can increase our majority in the House but we have to do it by more than just a couple votes,’ Biden said, despite predictions the GOP is on the move.

‘We can’t let this happen guys. And it’s going to be hard. Because­ inflation is going to scare the living hell out of everybody,’ Biden said.

‘I think they’re the most extreme party, that’s what the Republican Party is now. The fact of the matter is they’ve run the show, the MAGA Republicans.’

‘There are still a lot of good republicans in the senate,’ Biden said. ‘But it’s amazing to me how they’re cowered by Trump.’

At one point someone’s phone ran. ‘I know that’s Trump calling – he always does this,’ Biden joked, indicating how the former president was on his mind.