Biden’s approval rating is now 10% LOWER than Obama at the same point of his presidency and less than half of Americans trust him to get the country out of the pandemic, new poll numbers show

President Joe Biden’s approval rating is 10 points behind President Barack Obama’s at this point in Obama’s presidency, as Biden’s numbers have been battered by the prolonged COVID-19 pandemic, among other issues.

A new Axios/Ipsos poll released Tuesday found that Americans are getting more pessimistic about the pandemic, and losing trust in Biden at the same time. 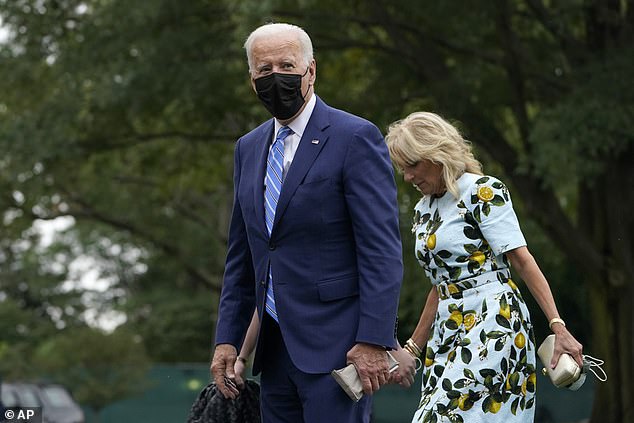 The poll found that currently 42 per cent of Americans surveyed trusted Biden a great deal or a fair amount on COVID-19.

It was 16 points higher when Biden was sworn-in in January.

Biden is also losing ground among members of his own party.

In June 45 per cent of Democrats said they trusted Biden on COVID-19 ‘a great deal.’

Generally, Americans believed returning to their ‘normal, pre-COVID life,’ is getting farther away, the Axios/Ipsos poll found.

Thirty per cent surveyed said it would take more than a year for ‘normal’ life to return.

This number has more than tripled since June, when 9 per cent felt the same way.

Another 24 per cent of respondents predicted ‘normal’ would return between six months and a year from now.

That number is up from 19 per cent in June.

Obama was sworn into office on the heels of the 2008 financial crash and spent his early months bolstering the U.S. economy.

Both Obama and Biden enjoyed higher poll numbers at the beginning of their administration than former President Donald Trump.

Trump, on the other hand, had a Real Clear Politics polling average his first week in office of 43.8 per cent approval.