Joe Biden tested positive for covid again on Wednesday but partook in a ‘light workout,’ his doctor said as the president faces another day of isolation.

‘This morning’s exam was conducted after the president finished a light workout, which he enjoyed,’ O’Connor said.

‘He is still experiencing an occassional cough, but less frequently than yesterday. He remains fever-free and in good spirits.’

Biden is continuing his isolation on the second floor residence.

The White House released a photo of President Biden on the phone with his national security team from his private office in the family quarters of the White House. Biden was wearing a face mask.

‘This morning, I held a secure phone call with my national security team,’ Biden said in a tweet. ‘We discussed a wide range of priorities, including the United States’ support of a free and open Indo-Pacific and our continued support for Ukraine in response to Putin’s war.’ 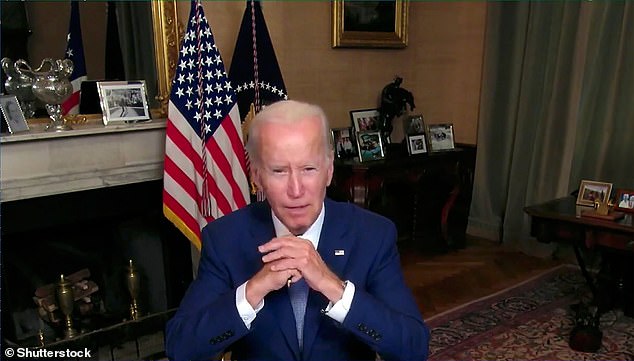 Joe Biden tested positive for covid again on Wednesday but partook in a ‘light workout,’ his doctor said as the president faces another day of isolation 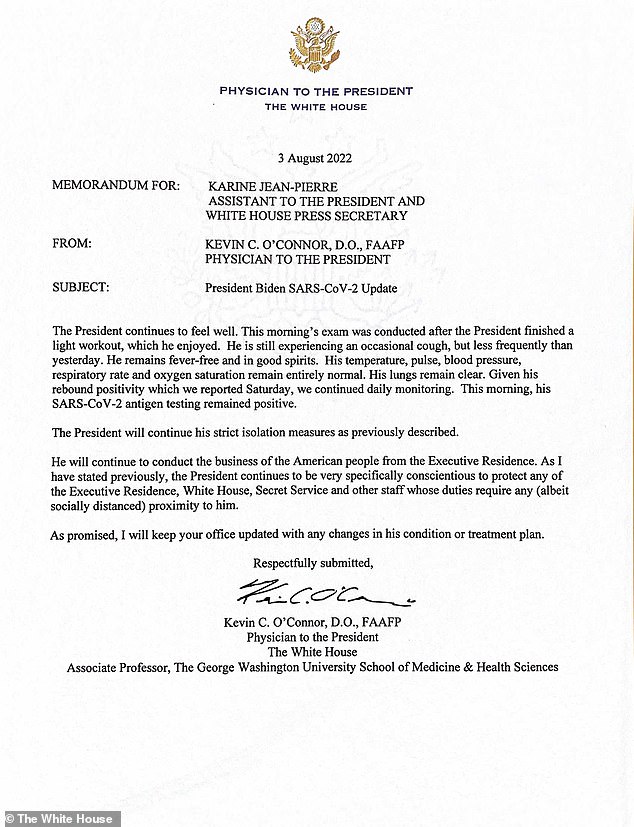 The president will speak on reproductive rights Wednesday afternoon when he takes part – virtually – in the first meeting of the interagency Task Force on Reproductive Healthcare Access, which is headed by Vice President Kamala Harris.

He has been appearing at events this week via zoom.

But the White House appears to be planning for in-person events to return soon.

Biden will sign the PACT Act of 2022 in the Rose Garden on Monday of next week, the White House announced.

The legislation, which expands healthcare for military veterans exposed to toxic burn pits, passed the Senate in an overwhelming 86 to 11 vote on Tuesday evening. The House has already passed it.

On Tuesday of next week Biden will sign the CHIPS Act, the White House said.

He tested negative on July 27 and returned to work in the West Wing, where he wore a face mask.

He tested positive again on July 30 with a rebound case of covid and has been in isolation ever since.

He last saw first lady Jill Biden on July 20th and has been spending a lot of time with the couple’s dog Commander as he works from his upstairs office.

Biden took Paxlovid during his bout with covid and a small percentage of patients who take the antiviral drug have a rebound case of the virus.

Indonesian man fractures his penis during 'vigorous' sex with wife

Woman, 20, issues desperate plea for her sister to return home, days after the 15-year-old vanished