The Sri Lankan ‘Biloela’ family have been granted permanent Australian visas, according to supporters.

The Nadesalingam family were reportedly visited at their Queensland home by the Department of Home Affairs on Friday afternoon and given the news – after a four-year immigration battle.

Priya Nadaraja, Nades Murugappan and their daughters Kopika, 7, and Tharnicaa, 4, were long the faces of the country’s asylum seeker debate. 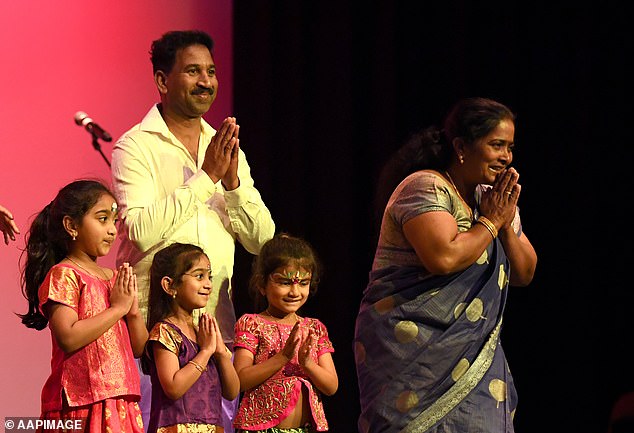 The ‘Biloela’ family (pictured) have been granted permanent visas to Australia, according to reports

The family were removed from their central Queensland town of Biloela in 2018, sparking a community-driven campaign to keep the Tamil family in Australia.

One organisation at the centre of the fight has claimed the family have been granted permanent Australian visas.

‘At 2.30pm today the Nadesalingam family, affectionately referred to as the ‘Biloela family’, were visited by the Department of Home Affairs team at their Biloela home and given the news that they have been granted permanent visas,’ wrote organisation Home To Bilo on social media.

The Department of Home Affairs is expected to issue a statement shortly.

George Clooney 'considering making a film about the Kray twins'

Anyone? Biden sticks out his hand and appears to ‘shake thin air’