The City of Chicago is expected to offer a $2.9million settlement to Anjanette Young over a botched police raid on her home in 2019, during which officers forced the innocent social worker to stand naked and handcuffed while they searched for a felon who actually lived next door.

The City Council’s Finance Committee is set to discuss the settlement proposal on Monday, before it comes before the full council at a later time this week, according to reporting by the Chicago Tribune citing multiple sources with firsthand knowledge of the matter.

Young filed a civil lawsuit against the City of Chicago in February 2021, alleging that officials engaged in a conspiracy to cover up civil rights violations. 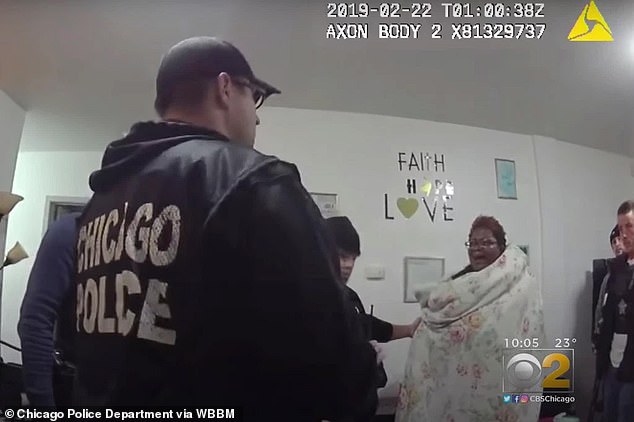 The City of Chicago is reportedly set to offer a $2.9million settlement to social worker Anjanette Young over a botched 2019 police raid, which was caught on video (pictured) 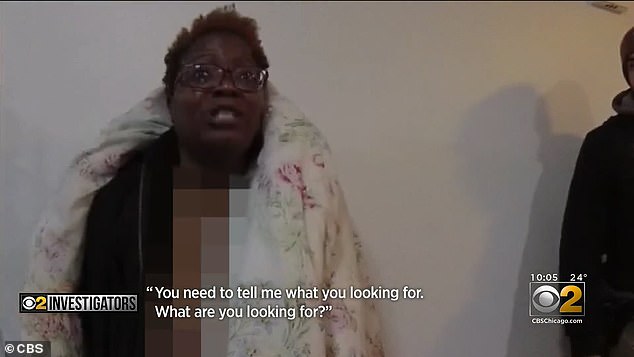 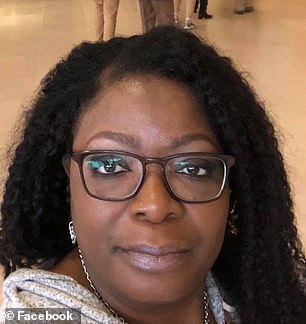 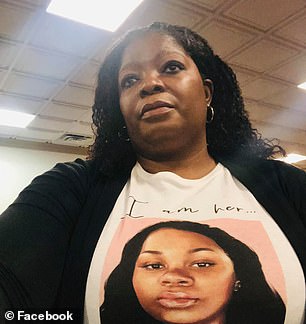 The complaint, which names the city and a dozen Chicago cops as defendants, alleges that police failed to investigate and verify an informant’s tip, saying that Young’s address was the home of a felon who was in possession of a gun there.

In February 2019, officers stormed into Young’s home as the woman was undressing for bed and forced her to stand naked and handcuffed for more than a half hour while they scoured the residence, before realizing that they had the wrong address.

In video of the raid, which was leaked to a TV station by Young’s lawyer in December 2020, a nude and visibly agitated Young repeatedly tells officers they have the wrong home and that there are no guns in the apartment.

Before the footage was broadcast, attorneys for the city sought a court order to prevent the station from airing the video.

The head of the city’s law department, Mark Flessner, later resigned for trying to block the release of the video. 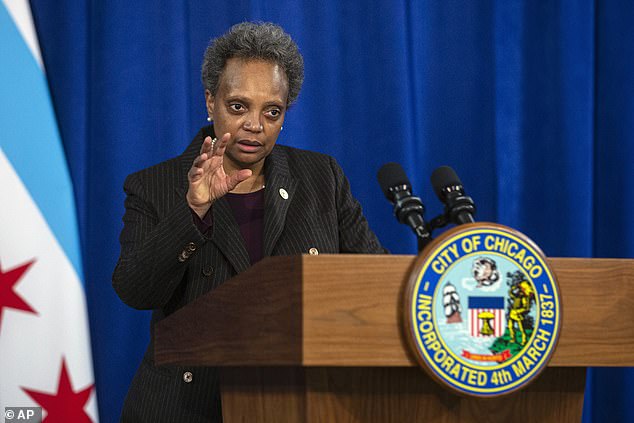 Chicago Mayor Lori Lightfoot has admitted that she first heard about the raid back in November 2019, and not in December of 2020 after video of the raid was aired on TV

But after the release of internal emails that contradicted the mayor’s claim, she admitted that she was first told by a top aide about a ‘pretty bad wrongful raid’ back in November 2019.

Lightfoot replied to her staff member’s email summing up the circumstances of the raid, saying, ‘I have a lot of questions about this one.’ But the mayor later claimed she had no recollection of that email exchange.

Young had filed a federal lawsuit against the city of Chicago in connection to the raid, but that lawsuit was dismissed last year. 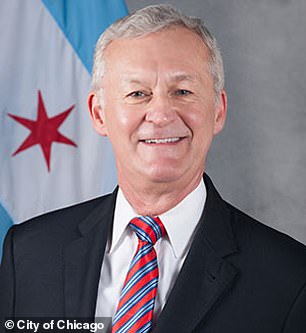 The incident began unfolding on February 21, 2019, when Young had returned home from her shift at a hospital and was undressed in her bedroom when a group of officers, with at least nine body cameras, broke down her door with a battering ram and crowbar.

The officers were looking for a 23-year-old suspect who allegedly had a gun, but they didn’t verify the address before conducting the search warrant. That suspect lived in the unit next door to Young.

Video footage was released publicly for the first time in December of last year and Young cried as she watched it back and revealed she’s still traumatized. 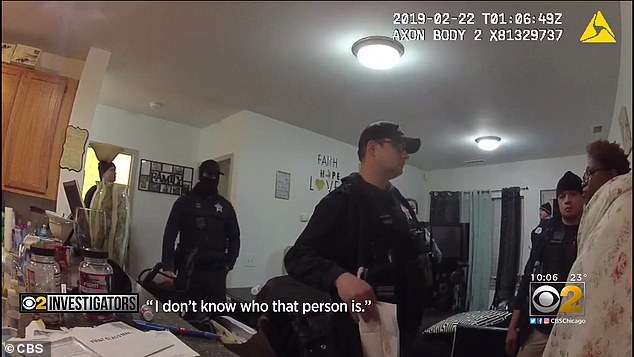 Young was undressing for bed on February 21, 2019, when a dozen cops stormed into her home 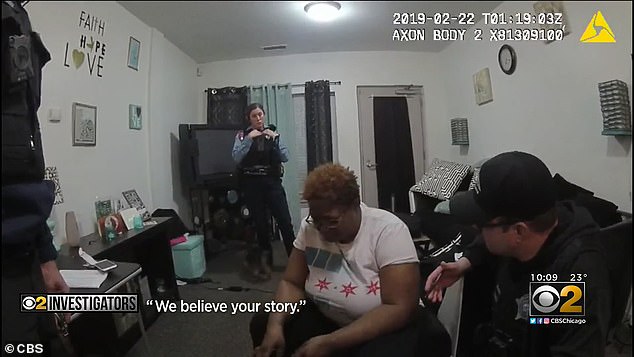 After nearly 45 minutes, police finally told the woman: ‘we believe your story’

Young had filed a Freedom of Information ACT (FOIA) request for the video to show the public. A court forced Chicago police to turn over the footage as a part of Young’s lawsuit against the department.

‘I feel like they didn’t want us to have this video because they knew how bad it was. They knew they had done something wrong. They knew that the way they treated me was not right,’ Young said.

In the disturbing footage Young appeared shocked when the officers burst into her home after tearing down the door and shouted ‘Police search warrant! and ‘Hands up, hands up!’

‘It was so traumatic to hear the thing that was hitting the door. And it happened so fast, I didn’t have time to put on clothes,’ Young said.

In the clip Young became distressed as she was forced to stand in the living room naked and handcuffed as officers swarmed her apartment.

She yelled at least 43 times: ‘You’ve got the wrong house!’ 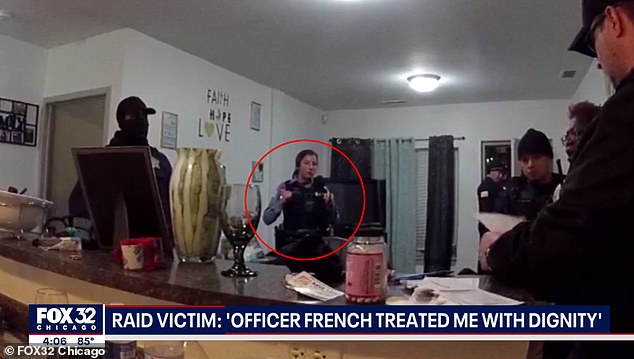 In November, the Civilian Office of Police Accountability caused an outrage after finding that half of the officers who took part in the raid – including Ella French who was killed in the line of duty in August (circled in red) – deserved punishment

At first an officer tried to put a hoodie sweater on her but it kept falling off. Then another officer ultimately threw a blanket over her shoulders but because she was handcuffed the blanket slipped off her shoulders, leaving her exposed again.

‘I’m just standing there, terrified, humiliated, not even understanding why in that moment this is happening to me,’ she said reflecting on the incident.

In the clip she begged officers to let her get dressed and she told them she believed they had bad information. She had lived in the home alone for the past four years. 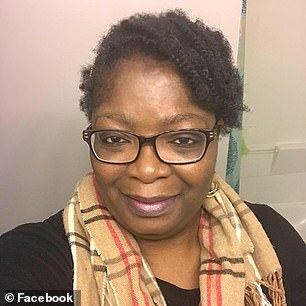 Young previously praised French’s conduct during the raid, saying she was the only person who ‘treated her with dignity’

‘Oh my God, this cannot be right. How is this legal,’ she cried.

It turned out that police had received a bad tip. A day before the raid a confidential informant told the lead officer on the raid that he recently saw a 23-year-old man who was a known felon armed with a gun and ammunition.

They gave the faulty address to police and cops didn’t independently verify if the address was correct.

It turned out the suspect lived in the unit next door to Young and had no connection to her whatsoever.

The suspect was awaiting trial on home confinement and was wearing an electronic monitoring device, meaning cops could have easily tracked his exact location.

Eventually the officers let Young put on clothes and said: ‘We believe your story.’

In the wake of the scandal over the raid, the Chicago mayor accepted her top lawyer’s resignation, and apologized for her administration going to court in an attempt to block the police footage from airing on television, for refusing Young’s Freedom of Information Act request to get video of the incident and initially trying to sanction Young for reportedly breaking a confidentiality agreement in her lawsuit with the city.

The 12 police officers connected to the bungled raid had been placed on desk duty pending the outcome of an investigation by the Civilian Office of Police Accountability, which concluded last month that half of them – including officer Ella French who was killed in the line of duty in August – should be punished.

The police review agency’s findings were met with harsh criticism from Chicago’s mayor, members of the City Council, the president of the city’s police officers’ union and French’s brother, with Lightfoot slamming the decision to recommend a three-day suspension for French months after her killing as the ‘height of tone-deafness.’

Young herself previously praised French’s conduct during the raid, saying she was the only person who ‘treated her with dignity.’