A black pensioner has won a racial discrimination battle after a judge threw out a council’s unlawful ban on him playing dominoes loudly with friends in a London square.

Westminster Council took Ernest Theophile, 74, and others to court last year, securing a ban on social gatherings in Maida Hill Market Square, where many members of the West Indian community meet to play games, including dominoes.

The council said residents had complained he and friends had been playing too loudly, but Mr Theophile said that enthusiastic playing is just a feature of West Indian culture.

The ban was later reduced, allowing Mr Theophile and his friends back into the square, but with the threat of jail if caught ‘playing loud amplified music, drinking alcohol and shouting and swearing.’

Last month, he won a ruling that the council did not take its duty to consider the racial equality rights of Mr Theophile and his friends into account when seeking the injunction. 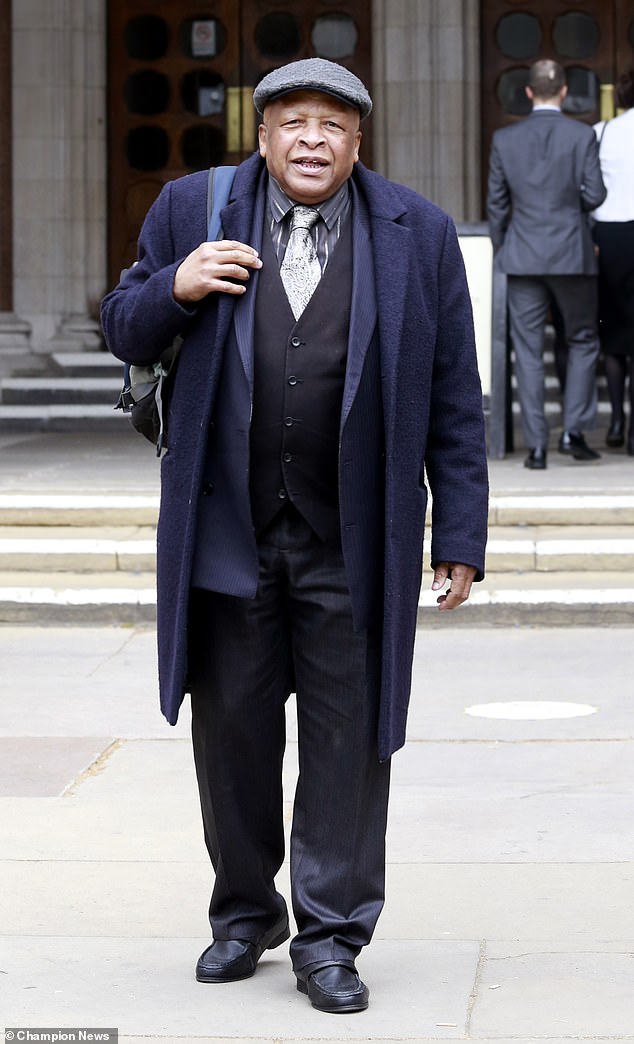 Mr Theophile, 74, welcomed the court’s decision and said Maida Hill Market Square, where he plays dominoes with his friends, was ‘a huge part of my life’

And now, after another hearing at Central London County Court, Judge Heather Baucher has thrown out the council’s bid for an injunction entirely, handing victory to Mr Theophile and his friends.

‘If you are West Indian, you just can’t play dominoes without making a bit of noise,’ said Mr Theophile – whose family came to the UK from Dominica in the 1950s as part of the Windrush generation.

Westminster Council previously said it had received over 200 complaints from local residents over anti-social behaviour, with at least one resident claiming they were forced to move home due to the racket in the square.

The neighbours’ complaints partly focused on the clatter and roar involved in playing dominoes.

Council officers claimed ‘anti-social’ elements had been gathering in the square and causing mayhem by ‘playing music, drinking alcohol, shouting, swearing, obstructing the highway and by urinating.’

But lawyers for Mr Theophile argued that even the toned down injunction still had a massive ‘dampening effect’ on his freedom to enjoy the square, forcing him to play his beloved dominoes in virtual silence and without his customary noise and passion. 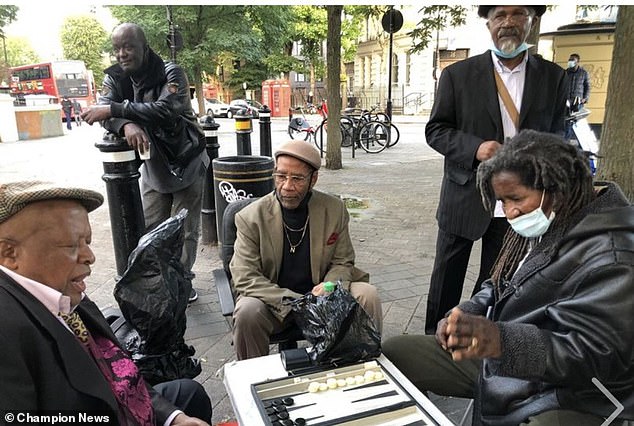 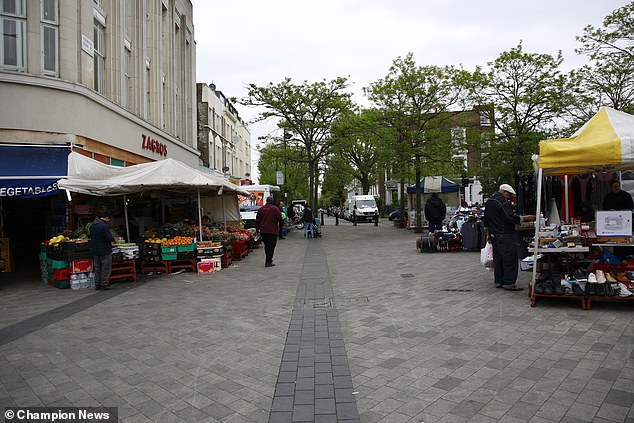 Maida Hill Market Square is a popular shopping and social hub, but Westminster Council banned gatherings there after complaints from residents, before the order was thrown out in court

His barrister, Tim James-Matthews, argued that the order – which carried the threat of prison if Mr Theophile was found in breach – was ‘likely to be indirectly discriminatory.’

Mr James-Matthews said: ‘Although apparently “neutral” in application, the majority of those whose behaviour is constrained by force of the injunction share a protected characteristic: race.

‘An injunction restraining the activities of a minority of black people in a public square where there is a theoretical power of arrest and sanction of imprisonment is indirectly discriminatory.’

Last month, Judge Baucher ruled that Westminster Council had failed to properly consider its ‘public sector equality duty’ before acting against Mr Theophile and others in the square.

But the case returned to court this week as Mr Theophile’s legal team successfully battled to deliver a final knockout blow to the council’s bid for a full injunction.

Judge Baucher ruled that Mr Theophile has an ‘absolute defence’ to the case brought against him and that the council’s attempts to show that it has complied with its equality duties were ‘retrospective’.

‘While I don’t consider there has been any bad faith on the part of the (council), I consider that given the way the case has been conducted and the injunction obtained without any legal basis, and given the very real risk that the injunction is likely to be indirectly discriminatory, this is not a case where the court should sanction any rearguard action,’ she said.

She ordered ‘summary judgment’ against the council – striking out its case before it even reached trial. The council must also pay the legal costs.

Earlier, Mr Theophile said he felt insulted to be associated with claims of anti-social behaviour, insisting he is a ‘dignified’ retiree who just likes to pass the time of day with his friends.

He and a group of elderly pals have been gathering at Maida Hill Market Square in north London for the past 12 years, where they ‘chat, socialise and play dominoes, cards and backgammon,’ he said.

Explaining earlier how the square became a refuge during Covid, the pensioner said outside court: ‘We all ended up gathering there because we were kind of lonely.

‘There’s nowhere else provided for us, all we wanted was somewhere we could go and sit down and play some dominoes.’

He had been visiting the square for most of his life, he said, adding: ‘although the area has changed a great deal since I was young, it is a huge part of my life. It’s part of my culture to spend time playing dominoes and backgammon with other West Indian men my age in the community where I grew up.

‘Lots of people who I know at the square have mental health difficulties and are socially isolated, but they know that when they come to the square, they can relax by sitting on the benches and chatting to other people. It keeps us healthy.’

Before the council’s case was thrown out, Anne McMurdie, solicitor for Mr Theophile, said that, while under the toned down injunction he could go to the square, the order had a ‘dampening effect’ on his freedom.

Although he could play dominoes, he would have to do it ‘very quietly and in a way that’s completely contrary to how he’s used to playing the game,’ she said.

‘It’s like saying you can play football but you can’t shout or swear or get cross,’ she said.

‘So they can play dominoes so long as they don’t do it in the traditional way, and they can’t have a beer with it either.

‘Bear in mind that there’s also a power of arrest and a risk of imprisonment involved – the idea that you could be arrested for shouting at a friend because you thought they cheated is crazy.’