When the body of George Mallory was found clad in hobnail boots just 2,000 feet from the summit of Everest, historians raised the tantalising possibility that he may have been the first man to reach the top of the world’s tallest mountain – 29 years before the first confirmed ascent.

But two crucial mysteries still remain unsolved after the 1999 discovery: what had happened to the body of his climbing partner Andrew ‘Sandy’ Irvine, and where was the Vest Pocket Kodak (VPK) camera they were said to be carrying that might contain crucial photographs proving the men had reached the top of Everest in their 1924 expedition?

As a result, Sir Edmund Hillary and Sherpa Tenzing Norgay continue to be credited with being the first climbers to reach the top of the Himalayan mountain – which straddles Nepal and China – in their 1953 expedition.

If Mallory and Irvine did reach the top of Everest, they would also have been the first to successfully do it on the deadly North Face, nearly 40 years before Chinese climbers accomplished the feat in 1960.

However, author Mark Synnott, who was part of a 2019 expedition led by New Zealander Jamie McGuinness to try to solve the mystery reveals in a new book that the Chinese may have found Irvine’s body and the camera, before burying the evidence. 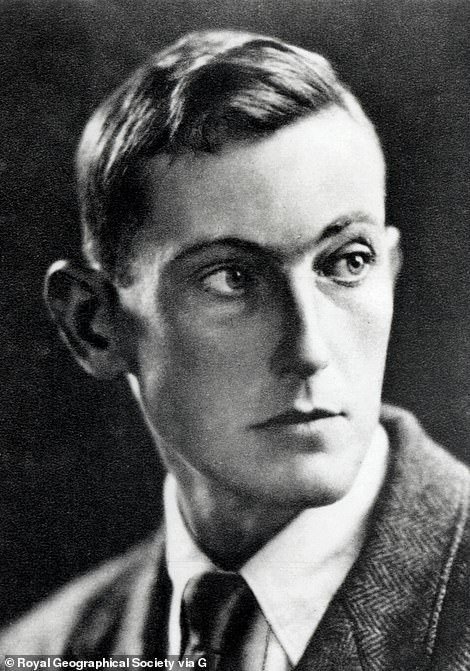 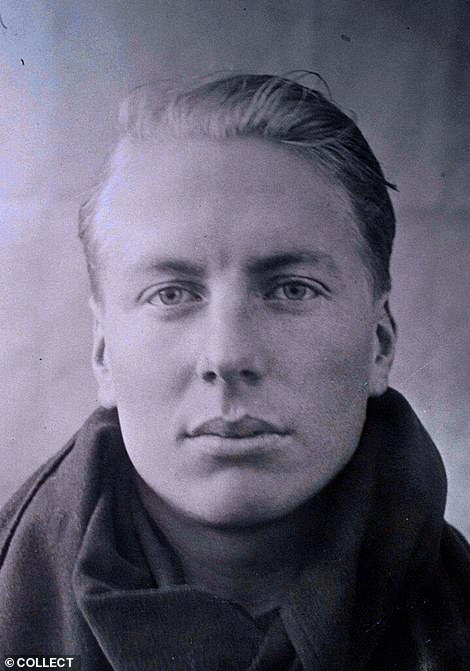 George Mallory’s 1924 expedition to reach the summit of Mount Everest resulted in his death, along with that of his climbing partner Andrew ‘Sandy’ Irvine (right). Whilst Mallory’s body was found in 1999, Irvine’s body – and the camera that the two men were carrying – has never been found 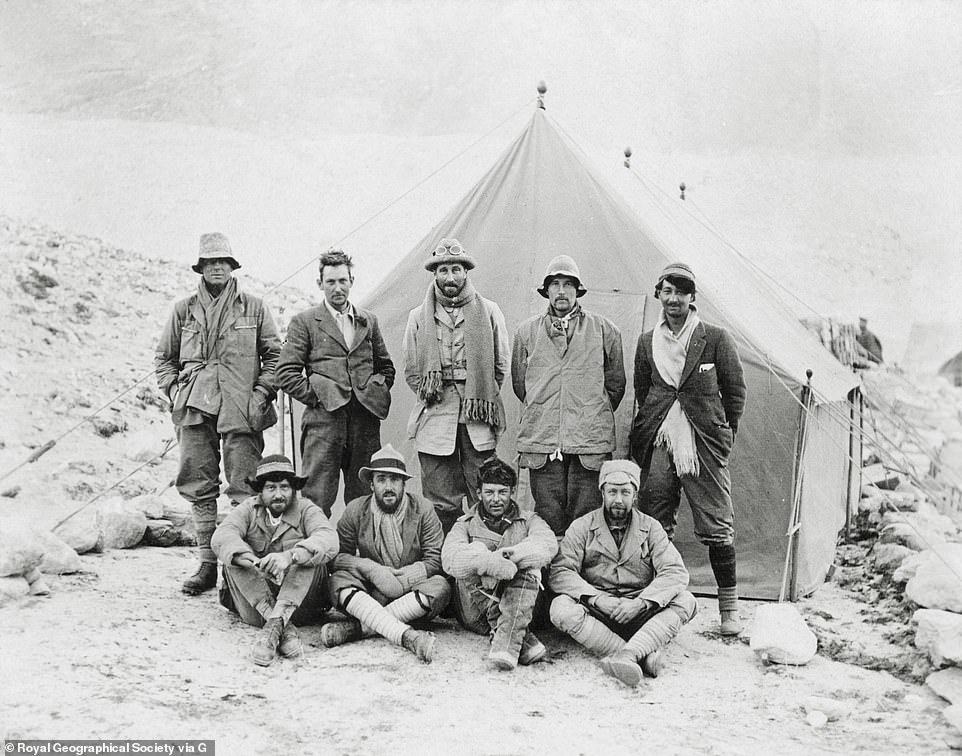 If Mallory and Irvine did reach the top of Everest, they would have been the first to successfully do it on the deadly North Face, nearly 40 years before Chinese climbers accomplished the feat in 1960. Above: Irvine (top left) and Mallory (top row, second from left), are pictured with the other members of the 1924 expedition to Everest

Synnott, said in The Third Pole: Mystery, Obsession, and Death on Mount Everest that one of McGuinness’s contacts told him he had ‘heard directly’ from an official of the China Tibet Mountaineering Association (CTMA) – the body that regulates ascents on China’s side of the mountain – that Chinese climbers ‘beat us’ to where Irvine’s body was.

The body was allegedly then taken off the mountain before taking it back to Lhasa, in Tibet, ‘where it is kept under lock and key with other Mallory artefacts, including the VPK’.

Synnott said the information echoed rumours the 2019 team had heard earlier in the expedition, adding: ‘We now have multiple sources all essentially saying the same thing: the Chinese found Irvine, removed the body, and are jealously guarding this information from the rest of the world – all to protect the claim that the 1960 Chinese team was the first to reach the summit…’

When they were last seen by their climbing teammate Noel Odell, Mallory and Irvine were around 800 feet from the summit of Everest.

But the men vanished soon afterwards and the facts about what happened to them remain unclear.

Mallory’s body was found with a rope around its waist and injuries consistent with the possibility that he and Irvine might have fallen while being roped together. 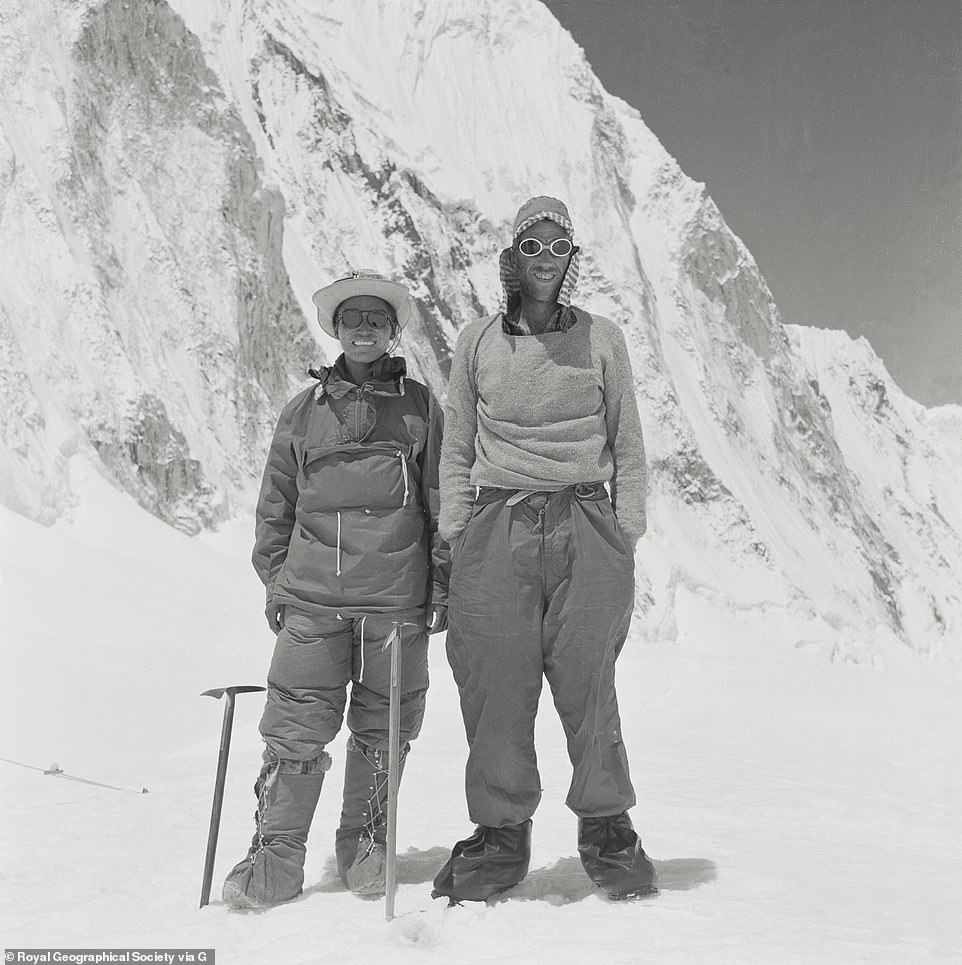 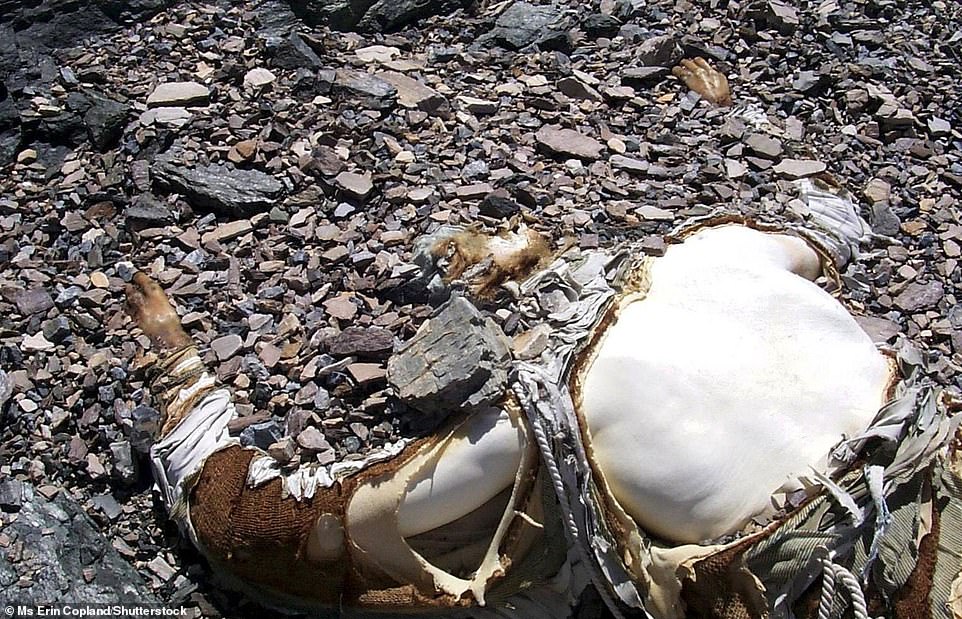 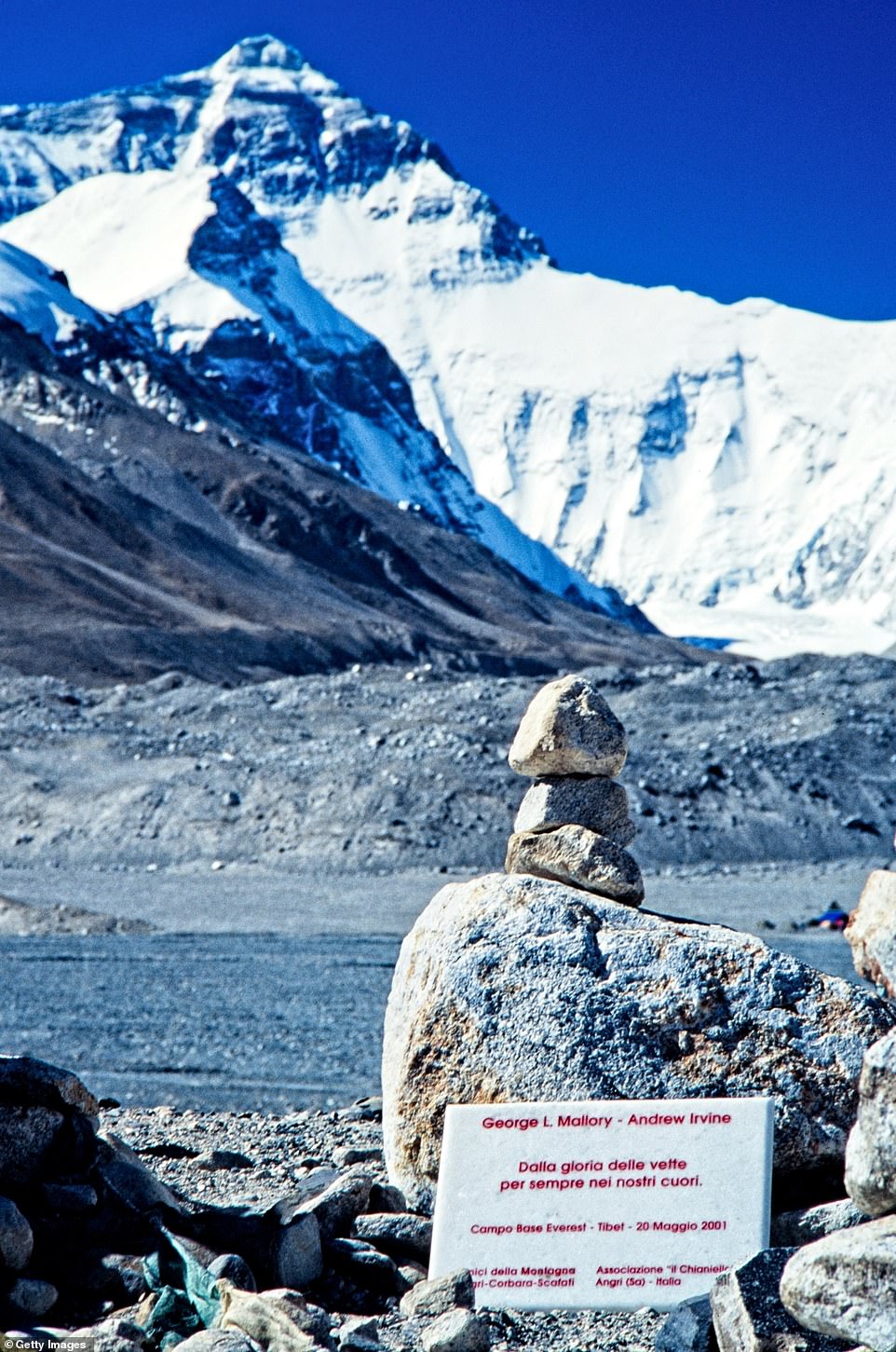 A memorial to Mallory and Irvine stands at Everest base camp. The pair may have been the first to reach the summit of the mountain 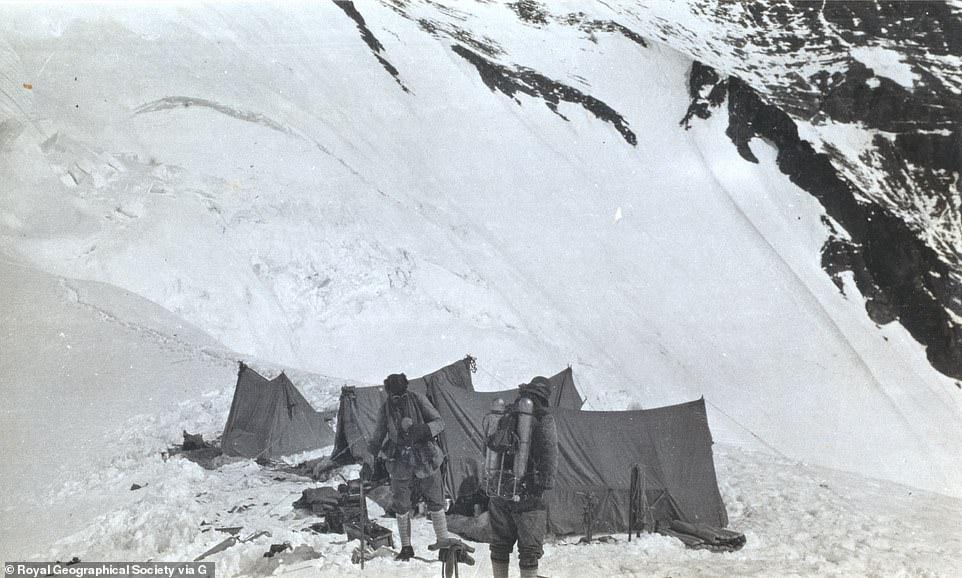 In an article for Slate.com, Synnott also revealed that, a month after the publication of his book, he was contacted by a former US intelligence officer who had been told by a ‘high-ranking official’ in the British Embassy in China that the body of a climber was found during China’s 1975 expedition to Everest’s North Face.

According to the embassy source, Chinese climbers also found the long-lost Kodak camera, which they allegedly brought back to Beijing.

But the US man, Wayne Wilcox, added in his email to Sinnott: ‘They screwed up the development of the film and ruined it.

‘Rather than admit they made a mistake, they erased all evidence that they had found the camera or the body.’

Synnott also interviewed an unnamed British diplomat who, in 1984, had interviewed the Chinese female climber Pan Duo – who was only the second woman to reach the summit of Everest and the first to do so via the North Face.

The interview had been arranged by Sir George Bishop, who was then the preside of the Royal Geographical Society.

The discussion took place in the headquarters of the Chinese Mountaineering Association, which went on to become the CTMA.

Synnott said that the diplomat, who wished to remain anonymous, told him that Pan Duo – had said that on the 1975 expedition, the Chinese team that she was part of found the body of Irvine and his camera.

After the camera was brought back to China, technicians were unable to recover any images from the film.

Synnott claims that the diplomat wrote a emo of the meeting which may have been sent to the Foreign Office, but no record of it has ever been found.

Also revealed by the author is a 1999 email allegedly written by the unnamed diplomat that was sent to Sir Anthony Galsworthy, the then British ambassador to China.

It was sent just days after Mallory’s body had been discovered.

Recounting how Duo had admitted to the camera being recovered, the email added: ‘We asked whether it had been possible to develop the film. I seem to recall that we were told there had been nothing on it.

‘This was all a long time ago and I could have got it wrong, although I don’t think so. And that meeting has always stuck in my memory.

‘If the film really was mucked up, I imagine it is quite possible that the association [CMA] would deny that the camera had ever been found.’

Synnott added that it is ‘possible, if not likely’ that the film was developed successfully and showed Mallory and Irvine on top of Everest.

If true, this would mean the Chinese climbers were not the first to ascend the North Face.

In 2015, letters written by Mallory in which he described his climbing partner emerged for sale.

In one, he said Irvine was a ‘splendid specimen of a man’, with a voice that reminded him of First World War poet Rupert Brook. 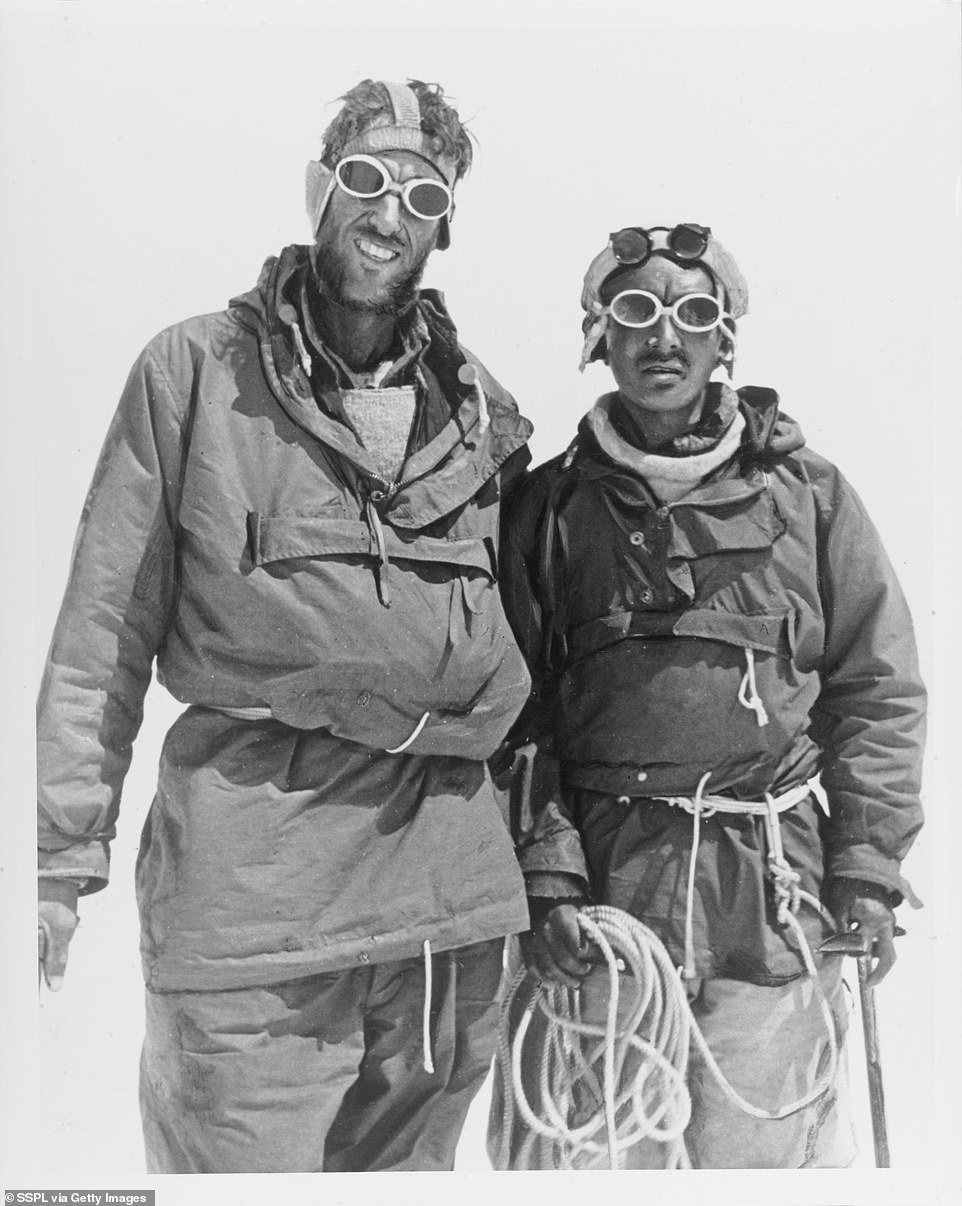 Edmund Hillary (1919-2008) and Sherpa Tensing, 29 May 1953. Hillary and Tensing on their return to Camp IV, the advanced base, after their successful assault on Mount Everest 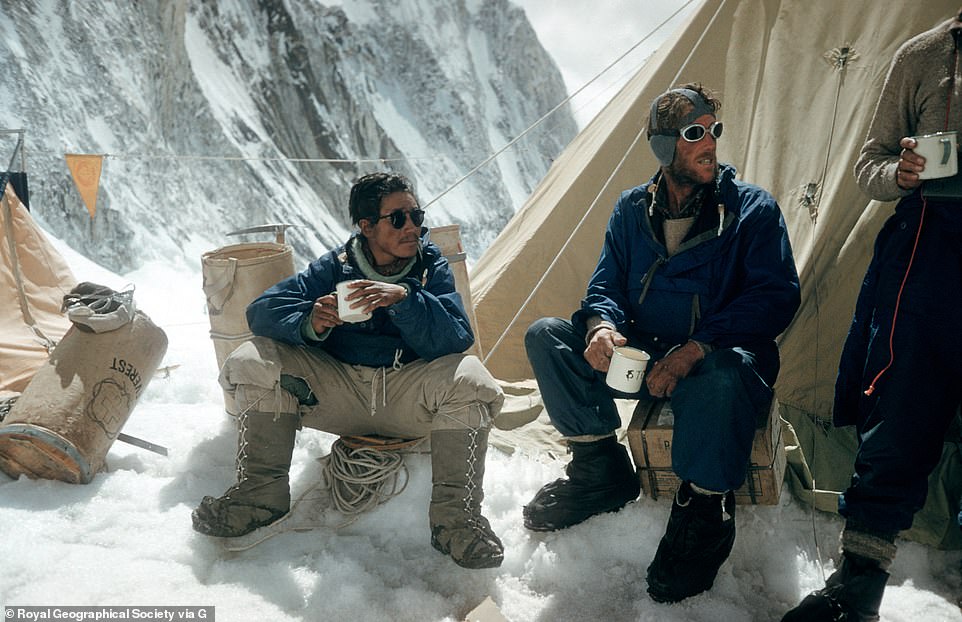 However, due to the two men’s deaths and the mystery over whether or not they reached the summit before dying, New Zealander Sir Edmund and his Sherpa climbing partner Norgay have gone down in the history books for their 1953 successful attempt.

Hillary, who was a 33-year-old beekeeper at the time, was paired up with Norgay as part of a British expedition to reach the summit.

The British wanted to beat Sweden to the top of the mountain after Swiss climber Raymond Lambert – also accompanied by Norgay – reached 28,210 feet before turning back due to lack of supplies just a year earlier.

Hillary was selected out of the British Commonwealth and Norgay was chosen as one of the most experienced Sherpas in Nepal.

It took the duo seven weeks to reach the 29,032-foot summit of Everest.

At the time, Norgay was one of the most widely-known citizens of his Indian hill town of Darjeeling, which was home to many Sherpas, who made their living helping Westerners climb the Himalayas, according to The New Yorker.

Norgay’s accomplishment earned him a retirement from his decades-long career as a climber and catapulted him into stardom.

Th mountaineer said later that he would never have made the historic climb had he known what would come out of it.

But he still made a living off of the fame, even turning his Darjeeling home into a museum that was open daily from 10am to 4.30pm and was complete with his climbing gear, trophies and photographs of his adventures.

Norgay, who held Indian and Nepalese passports, identified himself as a Sherpa – or Tibetan – by trade. Sherpas so often helped Westerners to the Himalayan summits that the word became a name for mountain guides.

They are known to quickly adapt to higher altitudes, where oxygen levels are low.

Norgay was just that – a mountain guide who was described as ‘astonishingly excellent in courage and determination’ – when he ventured to the top of Everest with Hillary.

After making the trek to the top of the mountain – and back down – Hillary was knighted and Norgay received the George Medal, which rewards acts of bravery in the UK.

Study: habitual marijuana users – including teenagers – are being hit with ‘uncontrollable vomiting’

Vicious thug, 30, used plug and flex to publicly FLOG his pregnant girlfriend – but is spared jail