The creator of Peppa Pig told MailOnline today that the animated star will remain ‘apolitical’ despite Boris Johnson calling the character ‘pure genius’ in his bizarre and bumbling CBI speech after a day out at Peppa Pig World with his wife and son.

He also called the New Forest theme park ‘my kind of place’ and it has since emerged that his bodyguards queued up for the Johnsons but the PM did pay for his family’s £85 ticket after a series of controversial freebie holidays this year.

Speaking to MailOnline today, Neville Astley, one of the show’s creators, said: ‘We don’t get involved in politics. Peppa is apolitical. The only politics she knows is that within her family, mainly Grandpa Pig and Daddy Pig, over a broken lawnmower or something.

‘I’m quite proud that he called us geniuses though. It means I can go down the pub later and wear a badge that says ‘genius’ on it.’

He added: ‘It’s great the Prime Minster gave us a mention – now anyone who didn’t know who Peppa Pig was, will do now. And it’s great that he enjoyed Peppa Pig World – we love it when anyone enjoys themselves there’.

The Tory leader was photographed with young Wilf at the wheel of a bright blue toy car on Sunday afternoon. Boris, his new wife and their son were also pictured having fun on a water ride. But others also there for the day admitted most failed to recognise him.

George Bell, who was there with his family, said that in order to keep a low profile at Grampy Rabbit’s Sailing Club, the PM’s security queued up for them with ‘seven jotted around and spaced out’ wearing ear pieces before the Johnsons jumped in. Another woman told MailOnline that later a ‘rather scruffy’ Mr Johnson was seen browsing toys and games in the gift shop.

Mr Bell said: To be fair I didn’t even recognise him at first. I think his security queued up for him. I did think it was a bit odd for a man dressed in a suit to be queuing up for a children’s ride. Then I saw an earpiece and he must have been doing it for Boris. He shot off after the ride. There was a back exit which I think he went through because I was trying to look out for him again.

He added: ‘I don’t know if he particularly loved it or just seemed thankful for a bit of rest. But he seemed like a nice bloke.’ 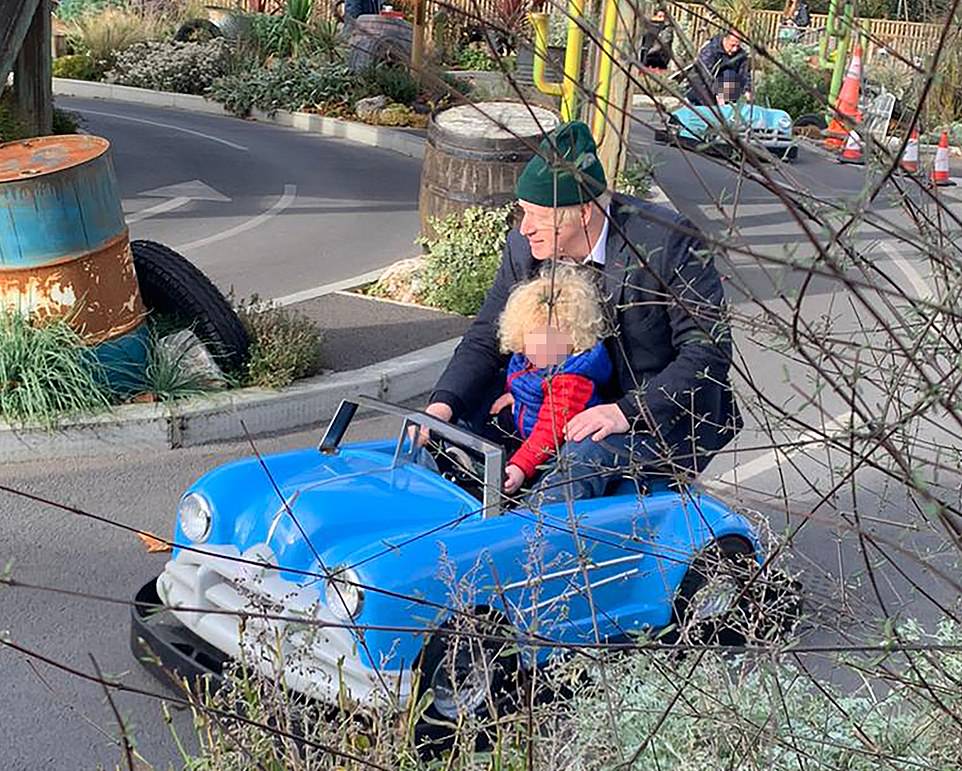 Prime Minister Boris Johnson, pictured with son Wilfred, one, at Peppa Pig World the day before his speech to the CBI 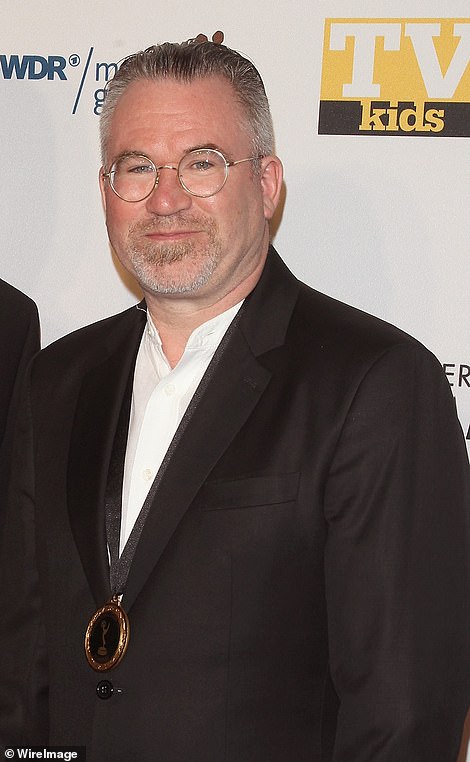 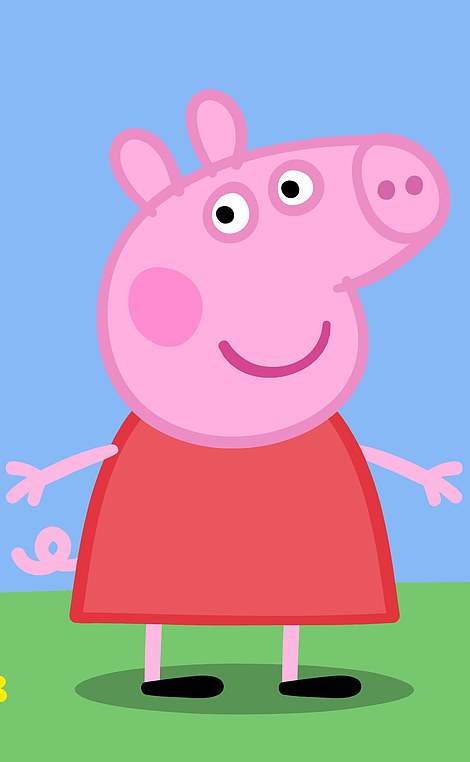 Neville Astley, one of the show’s creators, told MailOnline: ‘We don’t get involved in politics. Peppa is apolitical. The only politics she knows is that within her family, mainly Grandpa Pig and Daddy Pig, over a broken lawnmower or something’ 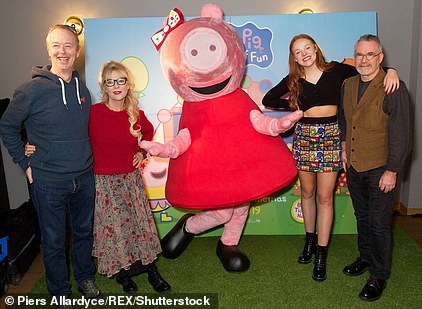 The studio had been working on a series for the BBC, but became frustrated by its scheduling so took Peppa to Channel Five and children’s satellite channel Nick Jr, with the show first airing in 2004.

Mr Neville, Mark Baker and Phil Davies went from animation graduates at Middlesex Polytechnic in the 1980s to creating a global franchise worth £1billion. The trio shared £140 million when Entertainment One bought a 70 per cent stake in Astley Baker Davies, their production company.

The children’s programme has since been broadcast in 180 territories and in 2019 Entertainment One was acquired for £3.3billion by Hasbro, the powerhouse toymaker behind the Monopoly board game, Play-Doh, My Little Pony and Transformers.

The programme was an instant smash, making £1million in merchandise sales in Peppa’s first year, and in 2005 scooped a Bafta for Best Pre-School Animation and the Grand Prix for Best TV production at the Annecy Animation Festival.

By the time the second series hit screens, Peppa had been sold to more than 120 countries, including the US, as well as Canada, Australia, France, Germany and New Zealand.

In 2010 Peppa became the UK’s top pre-school toy, with the character grossing more than £200 million in UK merchandise sales, double that of the previous year.

More theme parks look set to join Peppa Pig World at Paultons Park in Hampshire, and more merchandise – which already includes everything from Play-Doh to pyjamas, playing cards and playsets, as well as duvet covers, soft toys and jewellery.

The vast majority of Peppa’s billion dollar fortune comes from merchandising, with just five per cent made from licensing the programme for broadcast.

However, though popular, Peppa has sometimes been at the centre of controversy.

In the first two series her family did not wear seatbelts, and its heroine has been accused of encouraging children to behave badly by answering back and jumping in puddles. An episode where Peppa meets a friendly spider was also pulled from Australian television schedules over fears it could encourage children to approach deadly arachnids.

Yesterday he told the CBI that the Peppa Pig cartoon character is ‘pure genius’, despite resembling a ‘Picasso-like hairdryer’, before appearing to take a swipe at Whitehall by saying ‘no civil servant would conceivably come up with Peppa’.

Mr Neville, Mark Baker and Phil Davies went from animation graduates at Middlesex Polytechnic in the 1980s to creating a global franchise worth £1billion. The trio shared £140 million when Entertainment One bought a 70 per cent stake in Astley Baker Davies, their production company.

The children’s programme has since been broadcast in 180 territories and in 2019 Entertainment One was acquired for £3.3billion by Hasbro, the powerhouse toymaker behind the Monopoly board game, Play-Doh, My Little Pony and Transformers.

Astley Baker Davies continue to make the Peppa Pig shows, but Hasbro apparently owns the merchandising rights, making millions from the sale of toys, games and other items.

The Prime Minister told the CBI yesterday ‘not enough’ people had Paultons Park in Hampshire in a rambling address to business leaders where he lost his place during the key speech and kept saying ‘forgive me’ as he frantically shuffled his papers.

Downing Street declined to comment on the trip but a spokesman for Peppa Pig World told MailOnline: ‘Mr Johnson and his family visited Paultons Park in a private capacity and were not gifted their admission tickets.’

Mr Johnson’s trip to the amusement park has come under the spotlight after he spoke about it during a chaotic speech to business leaders on Monday, describing it as ‘my kind of place’.

Farhadul Azhar Tipu, 33, from Hertfordshire, was visiting the Hampshire attraction with his four-year-old daughter when they spotted the Prime Minister with his wife, Carrie, and one-year-old son, Wilfred.

‘We were literally behind them on the ride,’ Mr Tipu told the PA news agency.

‘My daughter didn’t know who he was, she was just happy to be in Peppa Pig World.’

Mr Tipu took pictures of Mr Johnson on a multicoloured ride, with Wilfred sitting on his knee.

He said he greeted the Prime Minister and asked him how his trip was, to which the politician replied ‘Very nice’.

‘There was civil dressed security around him but it was easy for me to talk to him as his security personals were very friendly,’ he added.

He was clearly enjoying being in the driving seat although Boris Johnson really should have had two hands on the wheel.

It was all child’s play, however, as he was sitting with son Wilf in a miniature car on a day out at Peppa Pig World on Sunday.

The Prime Minister’s wife Carrie was also on the trip which may have helped inspire yesterday’s speech to the CBI when he hailed the cartoon character and talked of his visit to the New Forest attraction.

Wilf, one, was wrapped up warmly in a blue and red padded coat with dinosaur embroidered trousers.

The family was also seen having fun on the Grampy Rabbit’s Sailing Club boat ride.

An onlooker told The Sun that Mr Johnson had ‘made a joke about how slow the ride was’ and ‘seemed in good spirits’. 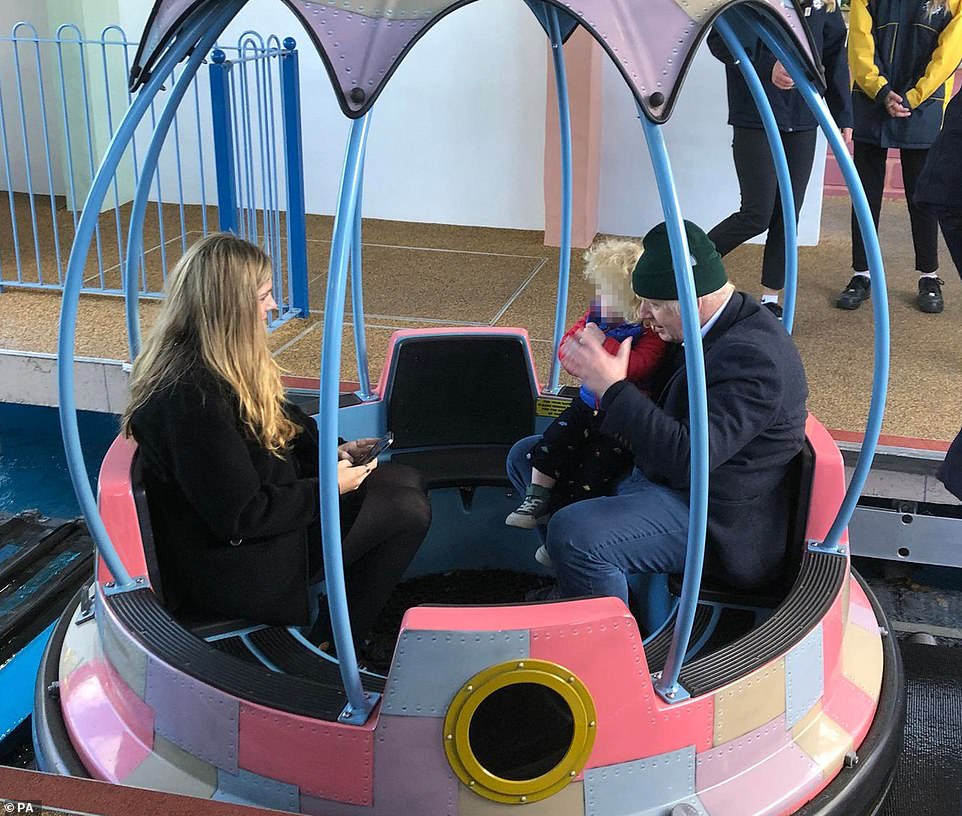 Inspired by his trip with his wife Carrie and son Wilf, pictured together, Mr Johnson then hailed the global success of Peppa Pig, telling business leaders the children’s cartoon was a great example of British creativity 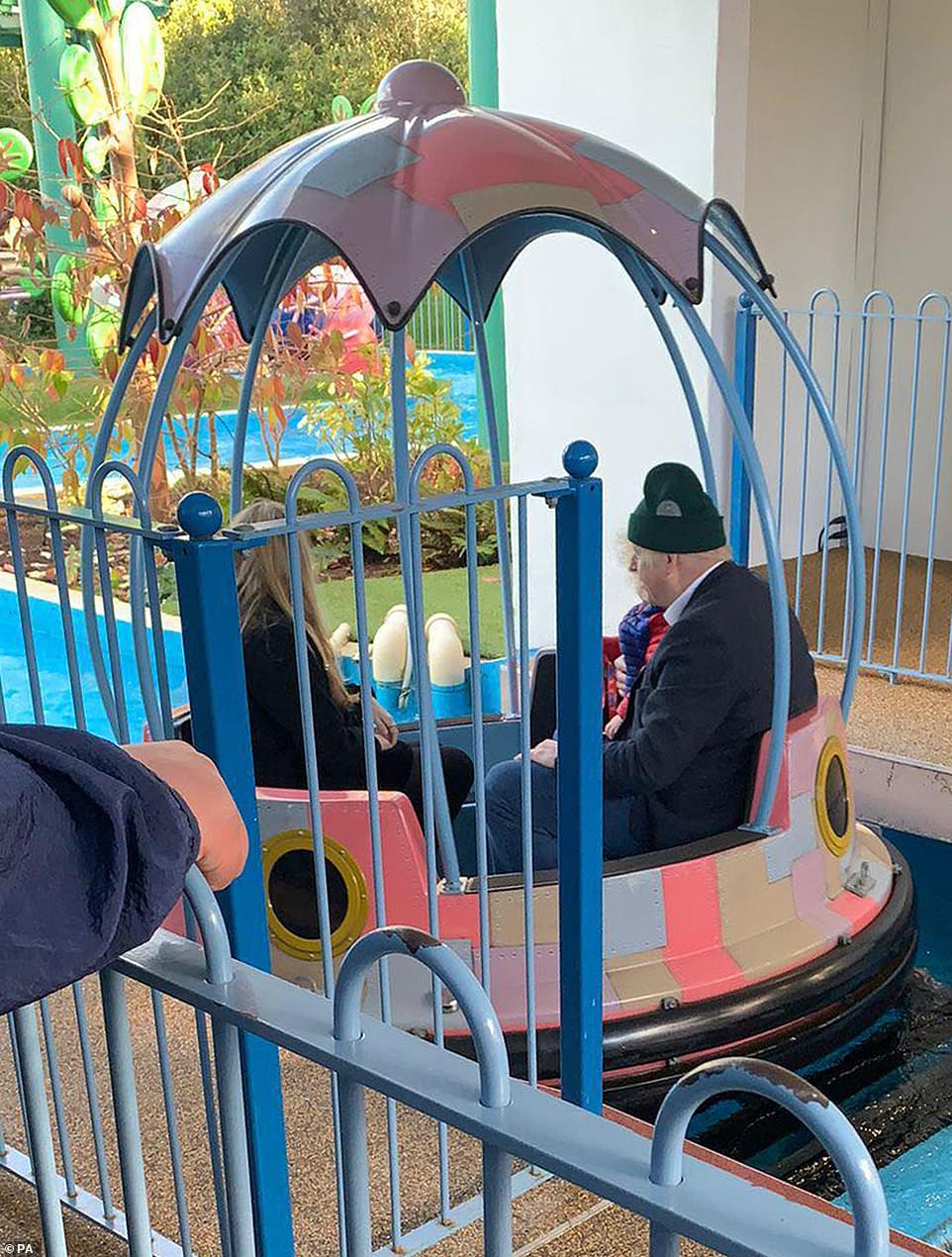 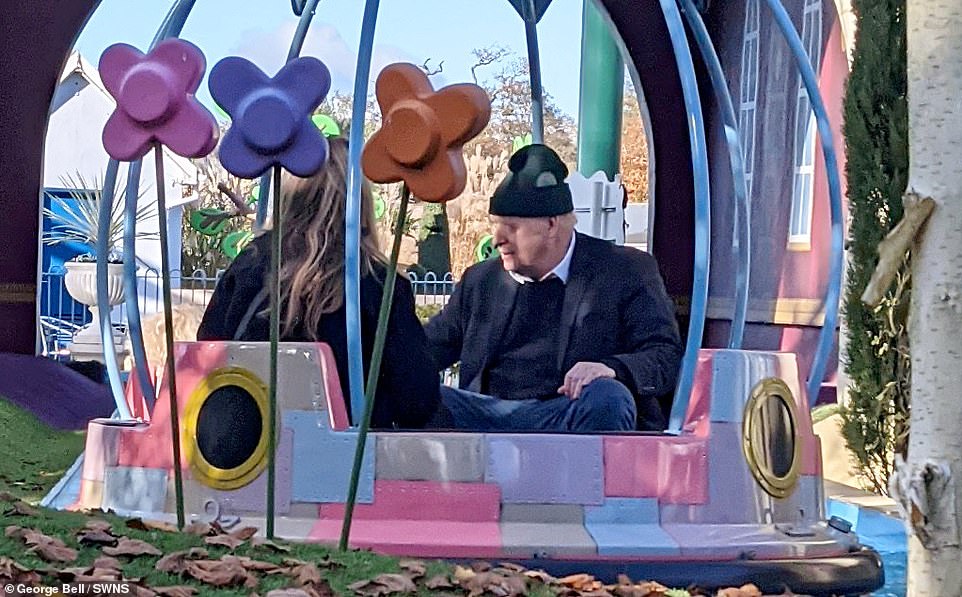 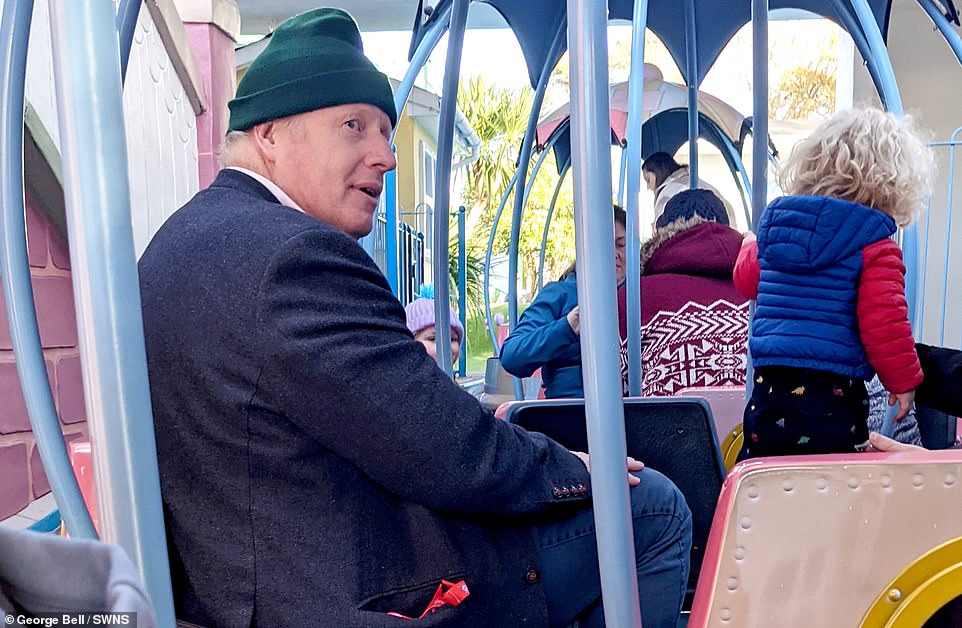 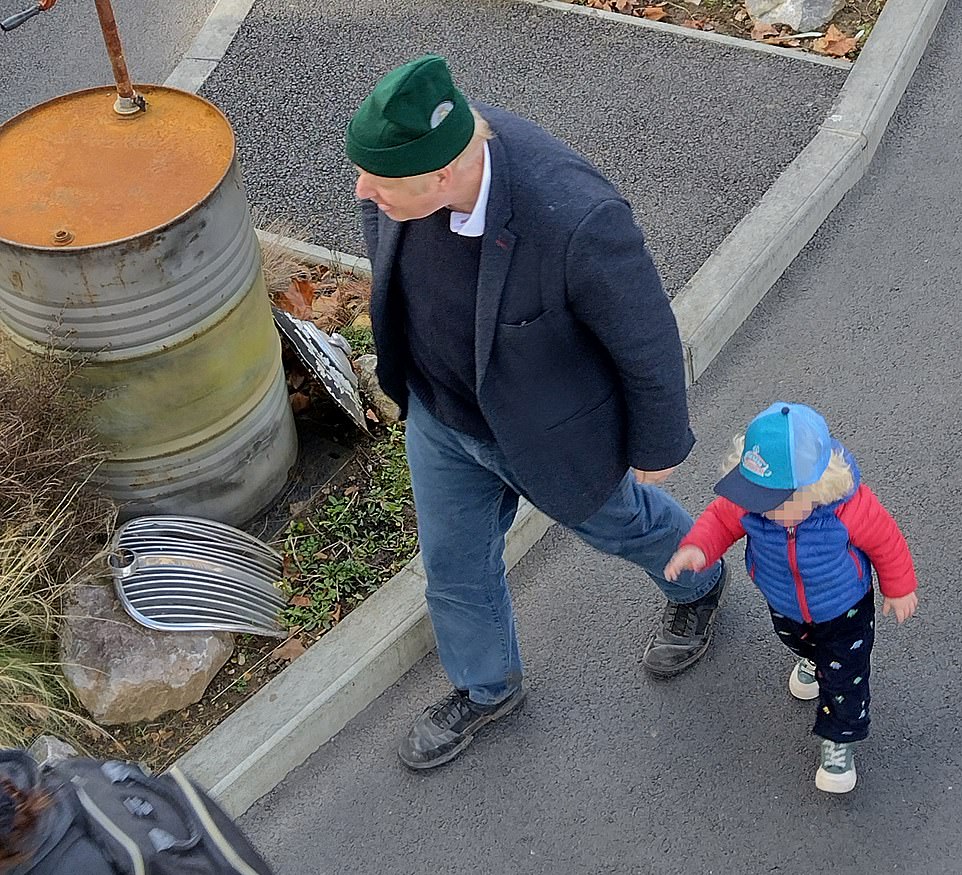 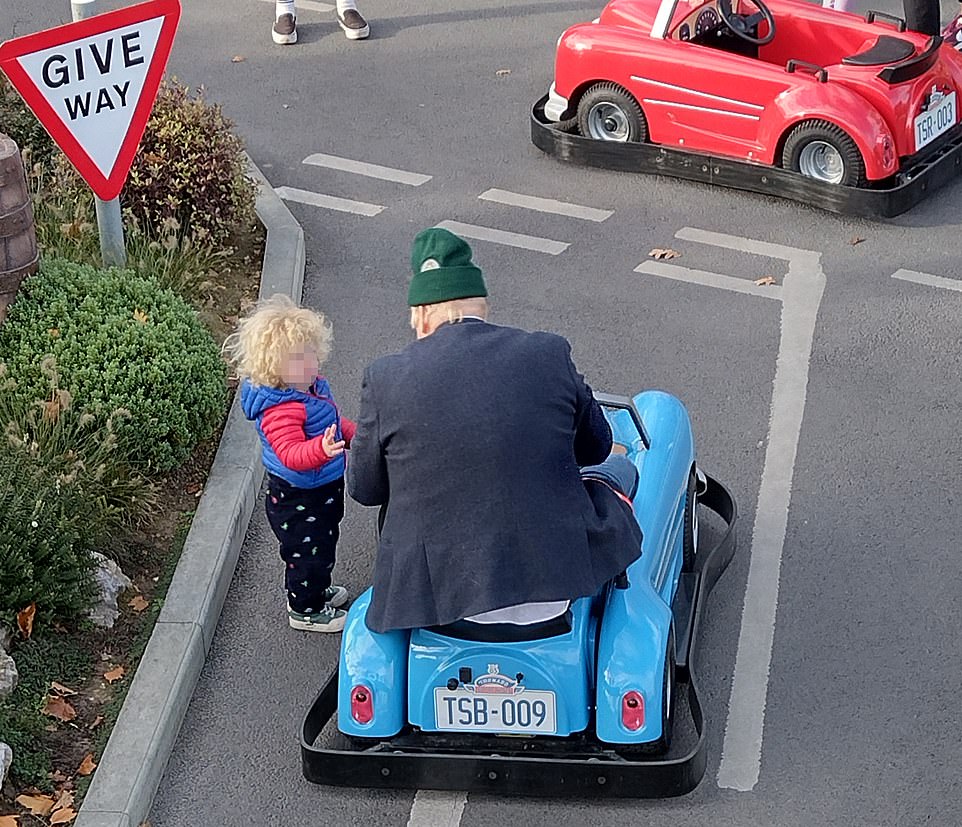 Wilf, one, was wrapped up warmly in a blue and red padded coat with dinosaur embroidered trousers as he played with his father 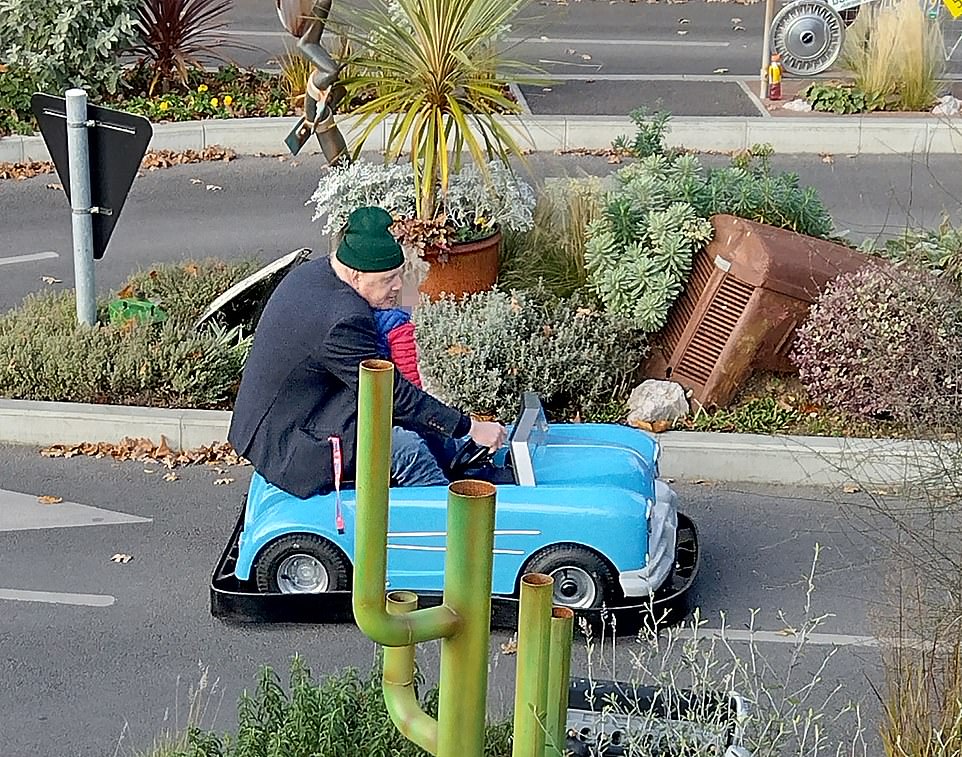 Boris and Wilf race away on a toy car together. In his speech Mr Johnson made the noise of a revving car

George Bell, 30, was out on a family day trip of his own to the theme park when he also spotted Boris waiting to go on the same ride.

Mr Bell said: ‘I first spotted him when he was queuing ahead of me. He briefly said ‘hi, how are you?’

‘Then on the water ride itself, my carriage bumped into his. He remarked the ride was awfully slow.’

The PM and his wife, who married earlier this year at Westminster Cathedral, are expecting their second child together in December.

Their first child together, Wilfred, was born in April 2020 and sports the same characteristic mop of blonde locks as his father.

Earth could have its own Saturn-like band due to to growing threat of 'space junk,' professor warns

Off-duty sheriff’s deputy, 26, is shot dead after being ‘targeted and ambushed’ in Kentucky