Welterweight boxing champion Terence Crawford has filed a lawsuit against his former promoter, Top Rank, in Nevada, claiming that chairman Bob Arum’s ‘revolting racial bias’ has cost him tens of millions of dollars over his career.

As reported by ESPN, Crawford is seeking damages in excess of $5.4 million, which is what the boxer claims he lost when Top Rank failed to book a second fight for him in 2019, as stipulated in his contract. According to the New York Post, damages are expected to exceed $10 million.

Crawford (38-0), a 34-year-old African American, said in the lawsuit that the 90-year-old Arum ‘continues to make racist and bigoted statements and purposefully damage the reputations of Black boxers.’ 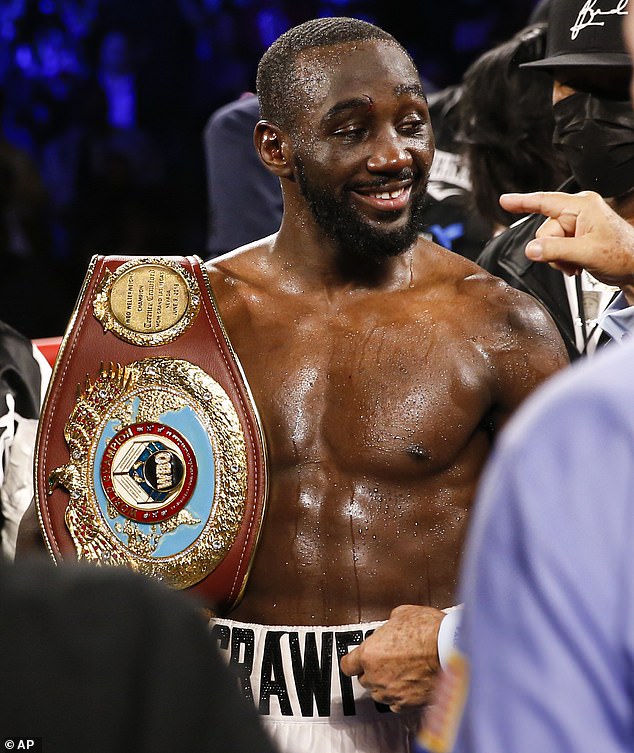 Welterweight boxing champion Terence Crawford (pictured) has filed a lawsuit against his former promoter, Top Rank, in Nevada , claiming that chairman Bob Arum’s ‘revolting racial bias’ has cost him tens of millions of dollars over his career 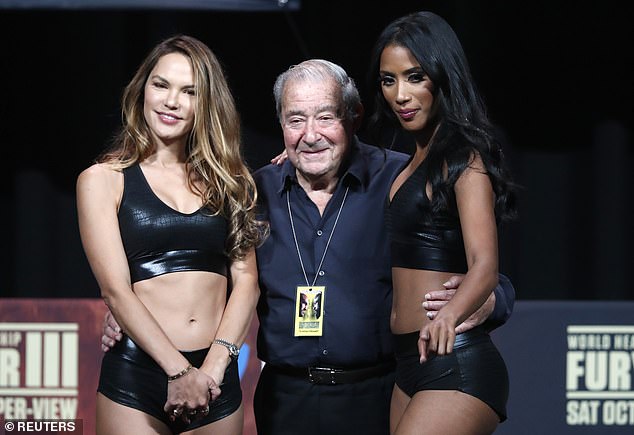 Bob Arum (center), who famously promoted Muhammad Ali among countless other boxing stars, signed Crawford in 2011. Since then, the Omaha-born boxer known as ‘Bud’ has become one of the sport’s biggest stars by going undefeated in 17 title fights

‘Arum’s sordid history with athletes of color, especially Black fighters, and his bias favoring white and Latino fighters is well-documented and known throughout the boxing world’ the lawsuit claims, adding that ‘Arum makes no secret of his deep-seated bias against Black fighters.’

Arum, who famously promoted Muhammad Ali among countless other boxing stars, signed Crawford in 2011. Since then, the Omaha-born boxer known as ‘Bud’ has become one of the sport’s biggest stars by going undefeated in 17 title fights.

He’s also become a centerpiece of ESPN’s coverage of Top Rank fights, which recently included a pay-per-view bout against Shawn Porter that garnered only 135,000 purchases.

That bout was the last on Crawford’s contract with Top Rank, and the decorated fighter promptly declared himself a free agent.

He also mentioned Top Rank’s failure to book a fight with Errol Spence Jr., who has two of the four major welterweight titles and is considered Crawford’s main rival in the division.

Crawford claims he had an agreement with Top Rank that included a $900,000 payment if the promoter failed to book a Crawford-Spence bout by the end of 2020, which never came to fruition.

Furthermore, Crawford says Top Rank is guilty of fraudulent misrepresentation, negligent misrepresentation and a breach of contract, adding that Arum also criticized him in an effort to hinder his future earnings and his ability to sign with a new promoter.

In 2020, Arum told reporters he ‘could build a house in Beverly Hills on the money I’ve lost on him in the last three [Crawford] fights.’

According to ESPN, Crawford earned $6 million for his win over Porter iN November and $3.5 million, $4.8 million, and $4 million for defeating Kell Brook, Amir Khan and Egidijus Kavaliauskas, respectively.

‘It is unfortunate that Top Rank did not treat Terence properly and in fact spoke out regularly against him,’ Crawford’s attorney, Brian Freedman, told ESPN.

Another Freedman client, boxer Mikey Garcia, had his agreement with Top Rank terminated after suing Arum’s company in 2014. Because of that dispute, Garcia was sidelined from the sport for three years in his prime.

‘Unlike other boxers bound to Top Rank contracts, Terence can assert his claims in court without Top Rank forcing him to sit out,’ Freedman said. ‘Make no mistake, that is a game-changer.’

Top Rank did not immediately respond to DailyMail.com’s request for comment.

Arum, however, did speak with the New York Post, shifting blame onto Crawford and claiming he’s lost $20 million on the boxer.

‘Don’t call a man a racist when really this is because of your own failures,’ Arum told the Post. ‘His marketability didn’t measure up to this ability and that has absolutely nothing to do with what race he is…The outstanding fact is that Terence’s numbers on PPV have always been dreadful because of his failure to market himself.’

UK cases continue to plunge, Plan B curbs may soon be lifted, and WHO says light at end of tunnel

Kill the Bill demonstrators take to city streets across Britain