A little boy was orphaned and also lost his two siblings after a suspected drunk driver sped down the wrong side of a California interstate and plowed into his family’s car.

Julian Montano, 4, suffered ‘extensive injuries’ as the lone survivor of the crash after a ‘drunk driver (was) traveling the wrong way’ on the busy I-80 in Sierra County last early Saturday morning, Anthony Gonzalez, the boy’s uncle, wrote in a GoFundMe about a week after the fatal tragedy.

Julian’s parents, Brittney and Antonio Montano, both 29, both died in the crash along with his  nine year-old sister Marianna and a  five year-old brother Antonio Jr , the Nevada County Sheriff’s Office said on Monday. The tragedy meant Julian lost every member of his immediate family, and happened while the family was traveling to the Grand Canyon for a Thanksgiving vacation.

‘This is a giant loss. Four family members at once is too much.’

The only other survivor in the head-on crash was the alleged drunk driver, who was hospitalized, but an official with the California Highway Patrol told the outlet it was too soon to confirm if the driver of the other vehicle had alcohol in his system. 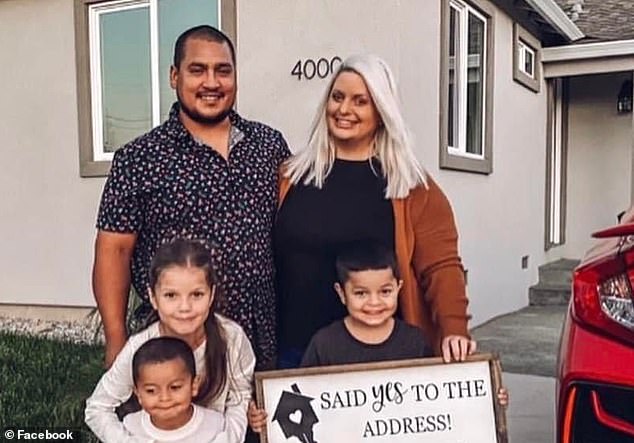 Pictured: Julian, front left, pictured in front of his sister Marianna to the left and brother Antonio Jr to the right, with parents Antonio and Brittney Montano, both 29-years-old 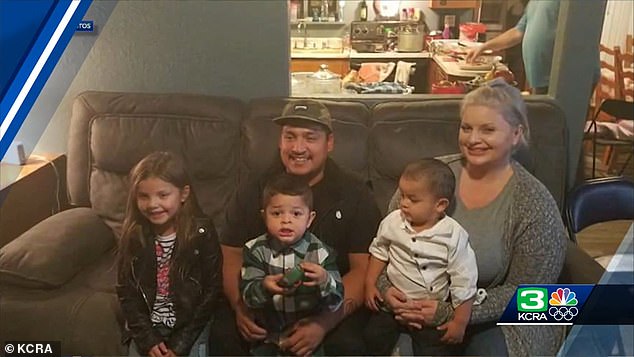 Of the Montano family, only four-year-old Julian survived Saturday morning’s fatal head-on car crash, who were killed by what police suspect was a drunk driver 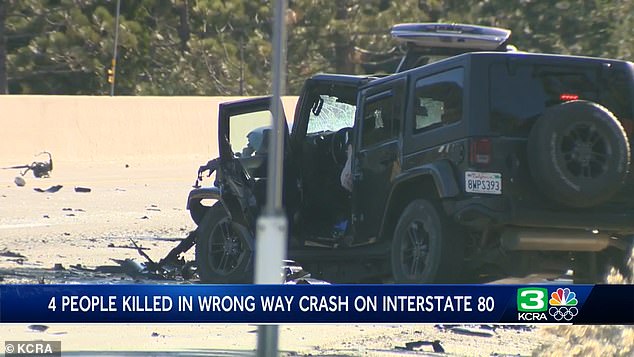 Pictured: one of the three cars involved in Saturday morning’s fatal crash, which left Julian Montano, 4, an orphan after his parents and two siblings were killed

However, the official did reveal ‘that’s the assumption’ of the driver being under the influence.

‘Alcohol may have been a factor in the wrong-way driver. It’s a little too early to tell but that’s the assumption,’ Sgt. Steve Casetta with CHP’s Gold Run office said soon after the crash.

The Montano family had been en route to the Grand Canyon for Thanksgiving at the time of the fatal crash, according to Gonzalez.

Julian is expected to make a full recovery after being airlifted to a hospital in Reno with injuries including a broken rib, leg and foot, his uncle wrote, while his parents and two siblings, identified by the San Juan Unified School District as Marianna and Antonio Jr, were all killed ‘instantly.’

‘We will never be the same after this and our family is trying desperately to stay strong for Julian,’ Gonzalez added to the family’s online fundraiser. 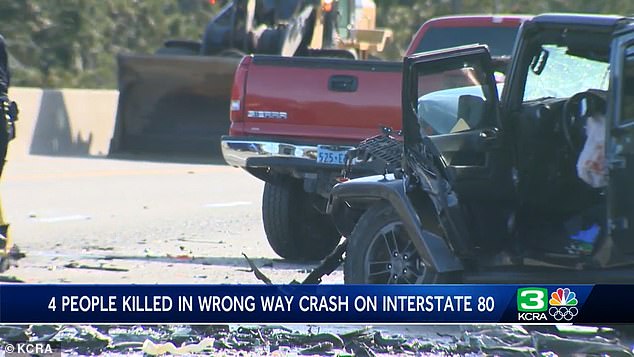 Pictured: another angle of the fatal car crash caused by a suspected drunk driver, which occurred along I-80 in in Sierra County, California early Saturday morning 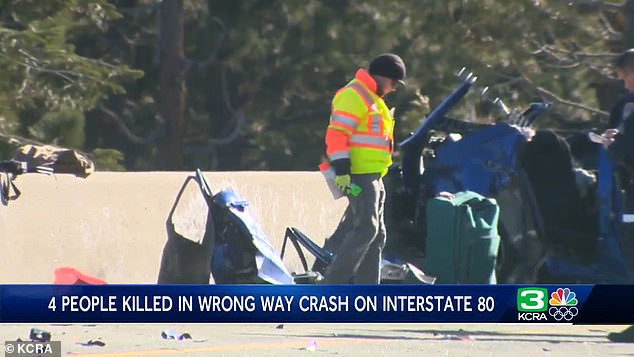 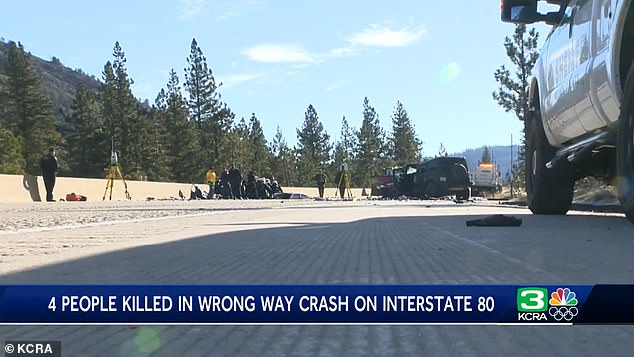 KCRA reported that a witness had called 911 to report a wrong-way driver around 4:45 am Saturday morning

‘We have to bury four loved ones that were taken from us way too soon, so Julian has a place to visit his mom, dad, and siblings.’

KCRA reported that a witness had called 911 to report a wrong-way driver around 4:45 am Saturday morning.

The crash occurred just minutes later at 4:47 am, according to the California Highway Patrol.

While the crash involved three vehicles, all four fatalities happened in the Montanto’s vehicle.

The driver of the third car involved in the crash suffered only moderate injuries.

Gonzalez told KCRA that Julian was in his car seat at the time of the crash, and not in someone’s arms as previously reported by the CHP. 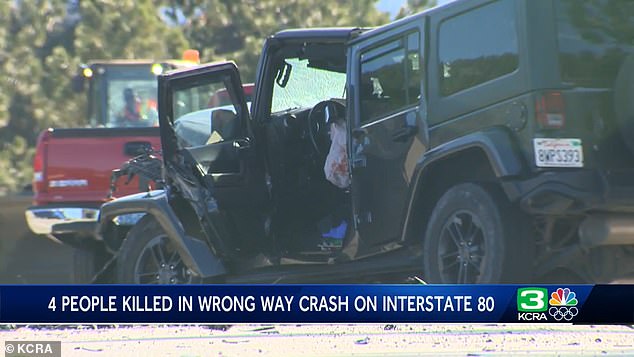 Pictured: a bloody airbag inside the Montano’s family vehicle, which was hit head-on by what police call a drunk driver, killing all but a four-year-old boy 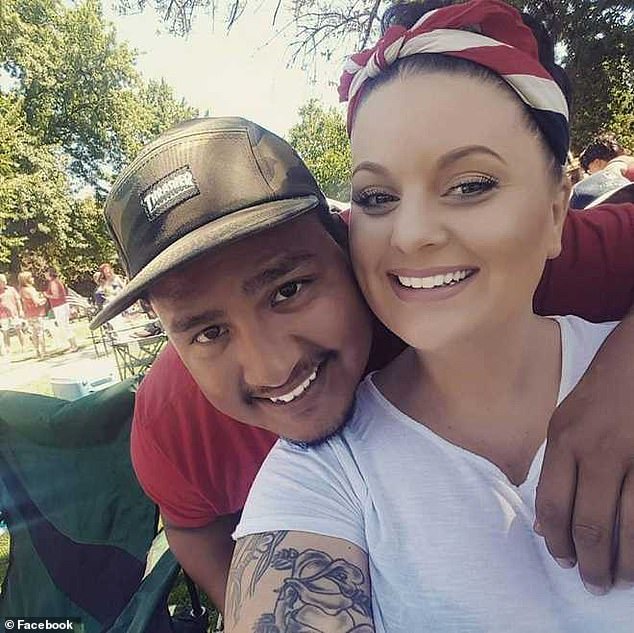 The California Highway Patrol said that they are still investigating that claim on Monday.

Gonzalez and his wife, Michelle, now have plans to adopt Julian as the family looks to bury the boy’s parents and siblings.

‘We want to have all four of them buried so Julian can go visit his family when he wants, any time he wants,’ he added.

‘I’ll go take him because they were taken away too soon.’

Meanwhile, the driver suspected of traveling under the influence remains in the hospital, with charges likely pending in the coming days authorities said.

Alabama woman, 29, is set to be the first in the state to receive uterus transplant

Police say three women reporting being spiked were not drugged