A British great-grandfather with dementia is said to be a ‘on death’s door’ in a prison cell in Dubai after being arrested for bounced cheques he says he didn’t write.

William Norman Meyerhoff, 72, originally from Grimsby, Lincolnshire, was hauled into custody by Dubai officials during a transit stop on a flight to Australia in May and has since been subjected to horrendous conditions despite his ill health.

His family said he worked in Dubai over a decade ago and never had any issues there, but authorities told him there were 38 criminal cases against him relating to bad.

William, despite struggling with significant mental decline, has always maintained the cheques were falsely made in his name by owners of a company he used to work for.

Williams’ family have said their great-grandfather is in very bad health and is essentially facing a death sentence unless he is released immediately. 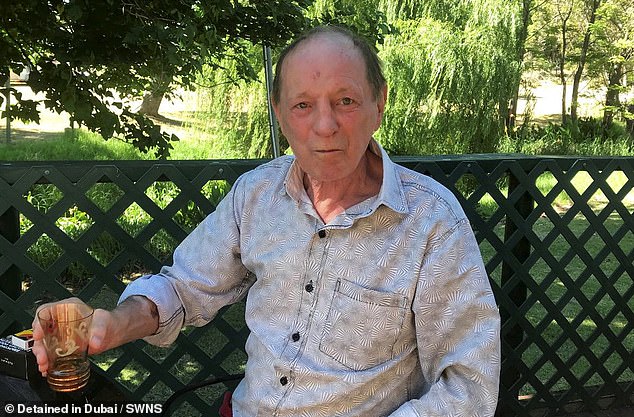 William Norman Meyerhoff, 72, originally from Grimsby, Lincolnshire, was hauled into custody by Dubai officials during a transit stop on a flight bound for Australia in May and has since been subjected to beatings and horrendous conditions

William’s two children, Matthew, 44 and Samera, 41, said they are devastated.

Matthew, who lives in Perth, Western Australia, said: ‘He is largely deaf and cannot understand most of what is said to him, he finds it very hard to communicate.

‘It seems that somehow, the Indian owners of Crystal Palace, put my dad down on the paperwork as a Director of the company but it was not his company and he wasn’t responsible for running it and he had no idea of the intricacies of the operation and didn’t even have access to the bank accounts.

‘Now, he’s been convicted in absentia and sentenced to essentially a life in prison.

‘He has been used as a scapegoat by those who actually owned the company and were responsible for it.’

His family say William now been made aware the owners continued to distribute cheques in his name unbeknownst to him, even after he had left the company.

William was flying to be reunited his family in Australia in May after being stranded in Africa during Covid.

The Australian government had helped get him a flight but during a stopover in Dubai, he was seized by officials and swiftly taken away.

His family have said William was told he would spent over five years in prison, with an extra six months added on if he is unable to pay a AED 98,000 fine (£19,620). 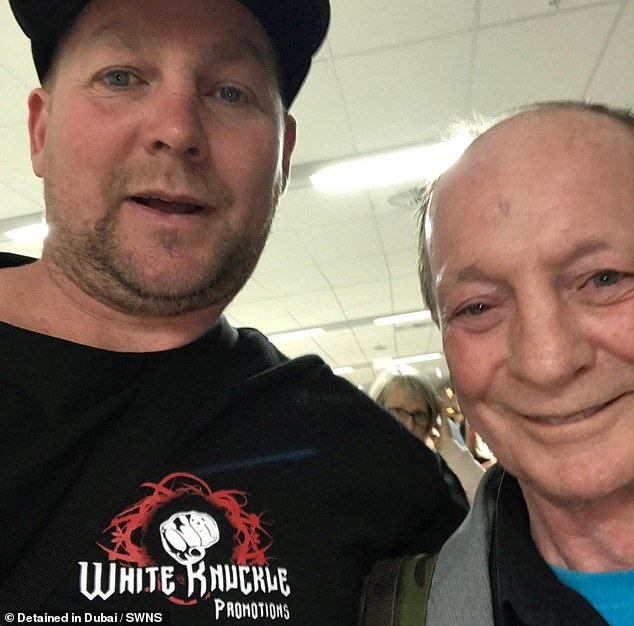 William’s two children, Matthew, 44 (pictured left) and Samera, 41, said they are devastated. Matthew, who lives in Perth, Western Australia, said of William: ‘He is largely deaf and cannot understand most of what is said to him, he finds it very hard to communicate’

Matthew added: ‘We have been unable to speak with dad. He’s had no assistance from police, from the prison or the hospital.

‘His treatment to date has been horrific. It is like they are trying to kill him. They can see he is extremely frail and ill and they are depriving him of his final journey with us.

‘We would do anything to see him again and we beg Sheikh Mohammed to have some compassion for our father.

‘He did not commit any crime and these cases are more than a decade old. Even if he tried to resolve them through the courts, he would surely be dead first.

‘We can not afford the extortionate fees being charged by the lawyers there.

‘If my father is not released on humanitarian grounds, we know we will not see him again and this is too much for us to handle and too much for his grandchildren.

‘We can not bear the thought of him dying all alone in a foreign prison.’

Radha Stirling, CEO of Detained in Dubai and Due Process International said: ‘This is how dangerous Dubai is to foreigners.

‘They can be placed as Directors of companies as sort of ‘white knights’, they can be held responsible for fraud, embezzlement and deliberately bounced cheques.’

Ms Stirling added: ‘He’s been disoriented and is difficult to communicate with.

‘One thing’s for certain though: He has maintained his innocence and is utterly confused by the allegations against him. 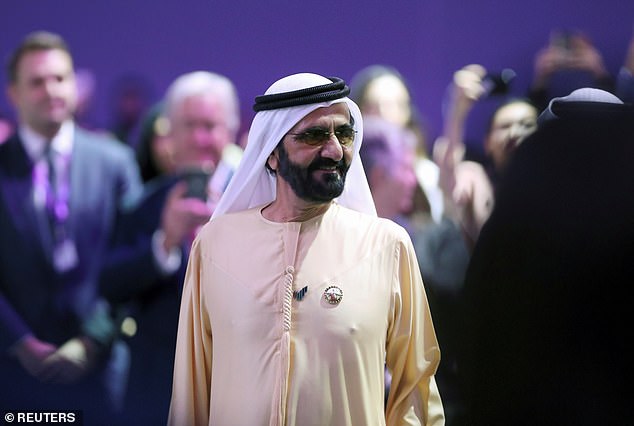 William’s son has appealed to the ruler of Dubai for help with his father’s case: ‘We would do anything to see him again and we beg Sheikh Mohammed to have some compassion for our father,’ he said

‘Had he committed any kind of crime, he would never have agreed to transit via Dubai.

‘This is why we encourage people who have lived there before, to check their police case status before going anywhere near the country.

‘You never know what frivolous case has been opened’.

Albert Douglas, a fellow Brit, is sharing a cell with William and has described him as being ‘on death’s door’.

He said: ‘We don’t think he will make it, we check his breath every morning to make sure he hasn’t passed.

‘He’s skin and bones, confused and I have volunteered to help him with his dignity. He can’t go to the bathroom without help.

‘I was beaten and tortured by guards and am still healing from the broken bones, still awaiting more operations and I shouldn’t be in here in the first place.

‘William is extremely unwell and medical assistance has not been forthcoming.

‘Instead, every month he is taken to a court where the judge asks him ‘Do you have the money to pay these cheques and fines in full?’

‘William replies ‘no’ and he is told ‘ok, we ask you again next month’ and he’s returned to his filthy cell once more.’

The family has appealed to ruler of Dubai Sheikh Mohammed for help with the great-grandfather’s case but has not yet received a reply.

It was revealed last week that Sheikh Mohammed used spyware to hack into the phone of his ex-wife and her lawyer Baroness Shackleton while a custody hearing was taking place at the High Court.

A British football coach has been jailed for 25 years in Dubai after four small bottles of vape liquid containing cannabis oil were found in his car.

Billy Hood from from Notting Hill, West London, was given the harsh sentence despite being able to prove the vape liquid belonged to a visiting friend who had mistakenly left them in his car.

The 24-year-old fitness fanatic, who is anti-drugs and doesn’t smoke, was convicted by a court of drug trafficking with intent to supply.

Police in Dubai are thought to have singled out Hood after monitoring WhatsApp messages and looking for key words related to drugs. A week before his arrest the friend who owned the vape liquid sent a message telling Hood he had mistakenly left it behind in his car. 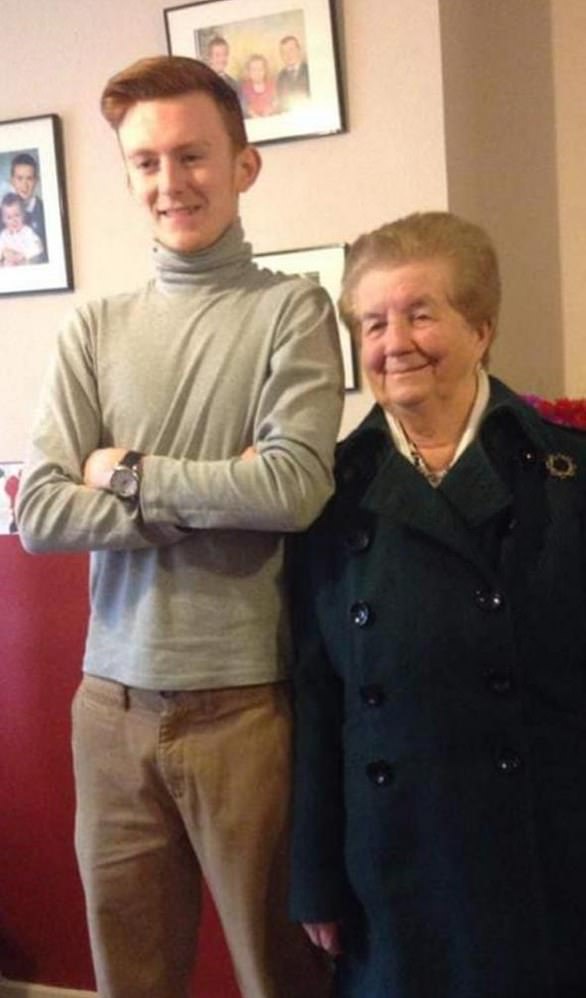 Police in Dubai are thought to have singled out Billy (left, with his aunt) after monitoring WhatsApp messages as a week before his arrest the friend, who owned the vape liquid, sent a message telling him he had mistakenly left it behind in his car