Tributes have been paid to a ‘humble and compassionate’ British-Jewish soldier who assisted in the liberation of Bergen-Belsen following his death aged 96.

Bernard Maurice Levy was just 19 when he was tasked with ‘sorting the living from the dead’ at the Nazi concentration camp in northern Germany at the end of the Second World War in April 1945.

On the day the young corporal crossed through the gates, at least 50,000 men, women and children had already been murdered by the Nazis. About 60,000 others were found barely alive.

So horrific were the scenes that he saw that Mr Levy found himself unable to convey the experience in words. His family have revealed that he suffered with insomnia for nearly 70 years until he finally spoke for the first time.

After the war, Mr Levy went on to found ‘outsized’ men’s clothing chain High and Mighty, which eventually had more than 40 outlets across five countries.

Bergen-Belsen was where the young Dutch diarist Anne Frank died, along with her sister Margot. 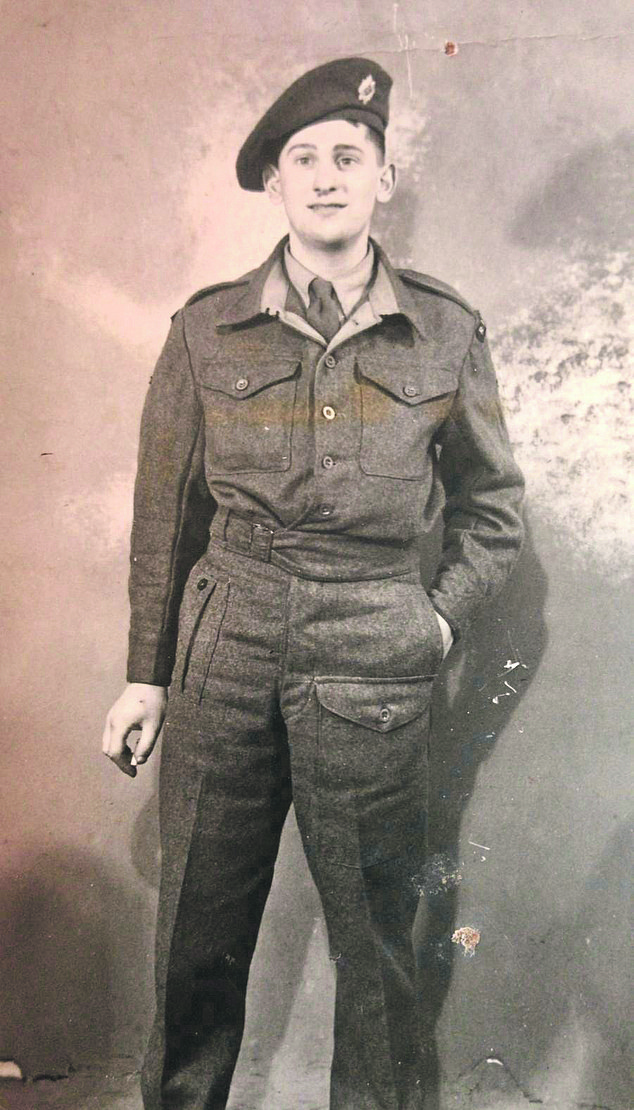 Tributes have been paid to a ‘humble and compassionate’ British-Jewish soldier Bernard Levy, who assisted in the liberation of Bergen-Belsen, following his death aged 96

Speaking this week to Jewish News, Mr Levy’s daughter Judith recalled how her Hull-born father – who died on 29 May – ‘went off to war a very naïve young boy and came back much more worldly-wise’.

Bergen-Belsen: The concentration camp liberated by the British

The Bergen-Belsen concentration camp was located in northern Germany, south-west of the town of Bergen itself.

It was run by the cruel and tyrannical SS commandant Joseph Kramer – known as the Beast of Belsen.

Among the inmates was Dutch teenage diarist Anne Frank, who died in the camp.

It was liberated on April 15, 1945 by the British 11th Armoured Division and soldiers discovered roughly 60,000 starved, and ill prisoners inside.

Some 13,000 unburied corpses littered the ground around the camp when they arrived.

When the Allies arrived at Bergen-Belsen, it was in the grip of a terrible typhus outbreak, with prisoners dying at a rate of 500 a day.

A sombre sign erected by the British Army, and photographed by Mr Parsons, documents at least part of that grisly death tool, revealing that 13,000 people perished even after troops came to their aid.

Shortly after the camp was liberated by British and Canadian troops in 1945, it was torched, and at least part of that suffering was destroyed forever as the buildings, along with the Reichskriegs flag and Hitler portrait which adorned them, were consumed by flames.

Mr Levy signed up for The Green Howards, an infantry unit based in Yorkshire, on April 6, 1944, about a year before he arrived at Belsen.

But, as his daughter revealed, he was ‘not of a soldier physique at all’.

At just seven stone and 5ft 3½, severely asthmatic and with ‘only one good eye’, Mr Levy enrolled in secretarial training and joined the Royal Army Service Corp as a clerk.

In usual circumstances, he may not have been able to join military service at all, but as Judith said, ‘at that point in 1944 it was “all hands on deck” and they would take anyone.’

His role would soon, however, migrate from desk work to much more active service.

In the aftermath of D-Day in June 1944, Mr Levy crossed the Channel on a landing craft.

Judith’s husband, Howard Parker, said: ‘He remembers sitting on the deck sunbathing, because nothing seemed to be happening.

‘But while the Germans had been pushed back in certain areas, they were still present along the coast and suddenly Bernard saw all these shells came flying overhead. He was certainly more active than I had understood.’

Mr Levy finally landed at Arromanches-les-Bains in Normandy, which had seen some of the heaviest of fighting on D-Day and as the war was ending, made his way to Celle, near Belsen, deep into German territory.

He was now tasked with helping to bring organisation back to Germany amid the chaos.

This started with him being sent over to Belsen.

Judith said: ‘At Celle he bunked up with another soldier who was sent over to Belsen. When he returned that day, the soldier didn’t say anything, but he was physically sick. The next day they sent Bernard.’

She remembers her father unable to articulate what he had seen and as a child she was reminded regularly by her mother, Doreen, never to mention the Holocaust.

‘If there was a picture, a book, or something in the newspaper about concentration camps we had to hide it. My mum would say, “He can’t take it.” As soon as something came on the telly, it was, “Quick, turn it off.” He got upset if he saw something like that, so my mum protected him.’ 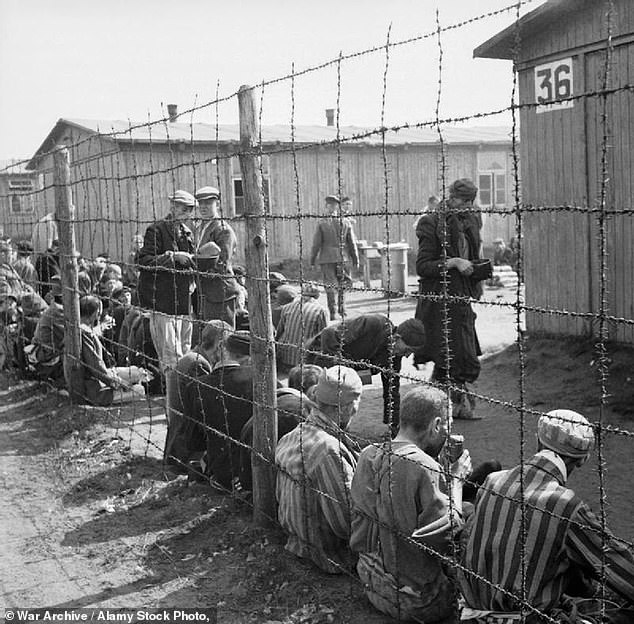 On the day the young corporal crossed through the gates, at least 50,000 men, women and children had already been murdered by the Nazis. About 60,000 were found still clinging to the last remnants of life. Above: Prisoners on the day of liberation 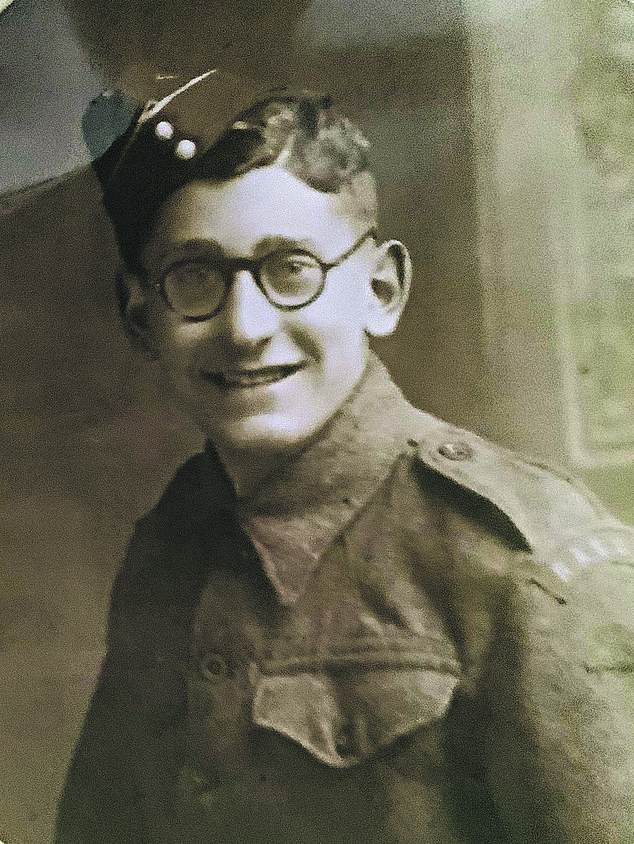 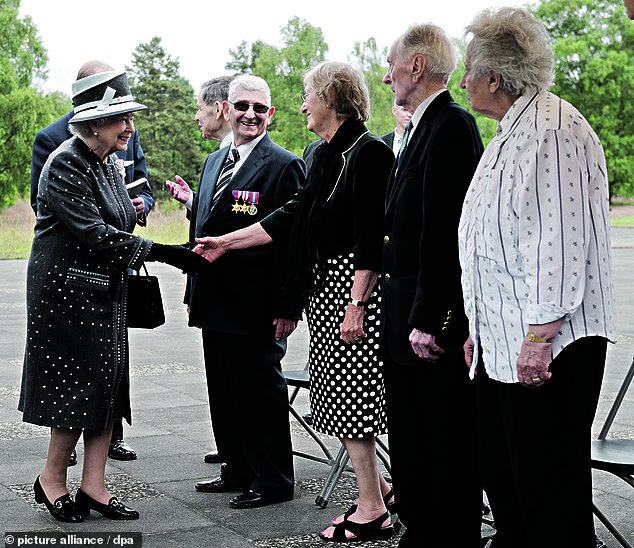 The veteran returned to Bergen-Belsen in June 2015 for the 70th anniversary of the camp’s liberation. He was introduced to the Queen during her first visit to a Second World War concentration camp.  Above: Mr Levy seen to the right of the Queen as Her Majesty shakes his wife Doreen’s hand 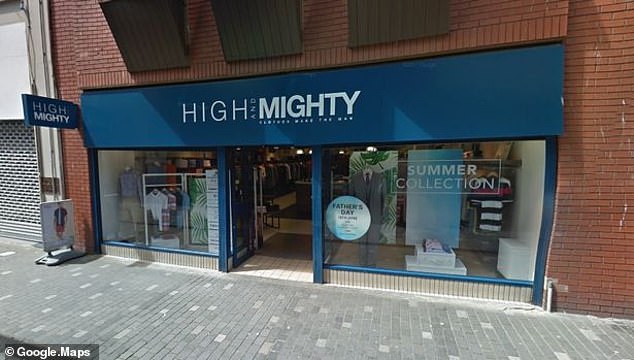 After the war, Mr Levy went on to found ‘outsized’ men’s clothing chain High and Mighty, which eventually had more than 40 outlets across five countries. Above: A High and Mighty outlet

Coupled with the humanitarian rescue operation at Belsen, Mr Levy was a scribe at the British military tribunal in Lüneburg in September 1945, where 45 high-ranking Nazi officials were charged with war crimes.

The testimonies he heard were ‘terribly distressing’ and his daughter believes may have in some ways traumatised him more than the initial weeks he spent at Belsen.

For most of his life after the war, he never had a good night’s sleep.

She said: ‘He used to sleep with the radio on and get up three times during the night and he never really slept. I used to think he would be better if he talked about it and would encourage him to. I trained as a psychotherapist and knew that hidden trauma was not a good thing.’

But it was only at the age of 85 that he finally opened up, first to Judith’s son and then to a local historian, which led to an extended interview with ITV.

He was subsequently invited to return to Bergen-Belsen, accompanied by the broadcaster Natasha Kaplinsky.

Mr Levy said at the time: ‘[There was] barbed wire everywhere, chaos, bodies. Skeletons…Invariably they all looked like skeletons.

‘You can’t help thinking about the people who were dying in there with no help, no food, no succour, no hospital treatment. It just feels terribly sad.’ 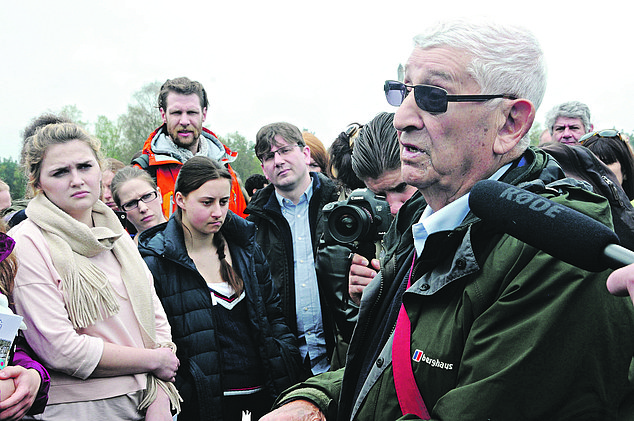 It was only at the age of 85 that he finally opened up, first to Judith’s son and then to a local historian, which led to an extended interview with ITV 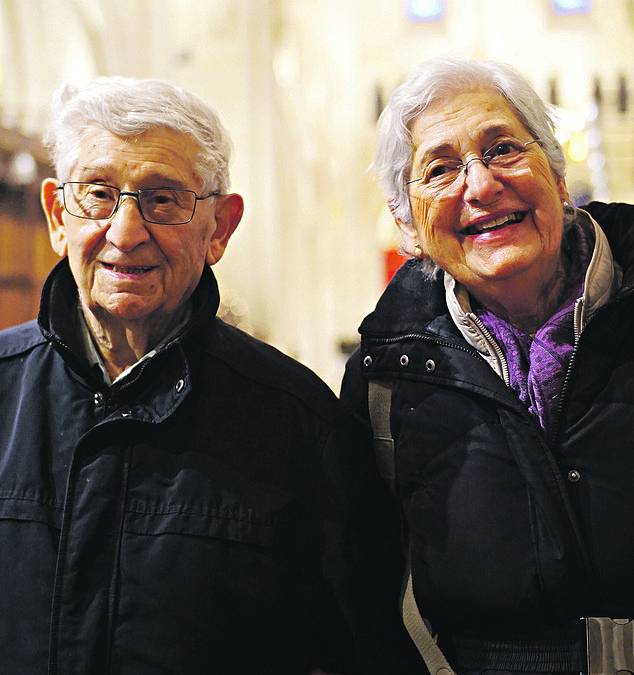 After the war, Mr Levy returned home to his parents and two brothers in Hull before, at the age of 24, marrying 18-year-old Doreen (right) in 1950. The couple had Judith and other daughter Ruth

The veteran returned in June 2015 for the 70th anniversary of the camp’s liberation.

He was introduced to the Queen during her first visit to a Second World War concentration camp.

He was also passionate about educating young people and worked closely with the Holocaust Educational Trust.

Returning to Belsen was ‘a huge thing’ for Mr Levy, but alongside the mass death he witnessed, he also saw a rebirth.

Having experienced unimaginable tragedy, many survivors at the camp began to forge new relationships and marriages skyrocketed.

His daughter said: ‘He talked about people coming back from the dead, that people looked like skeletons, but he saw them gradually come back to life.

‘As he was a Jewish soldier, he was invited to all the weddings, all the bris ceremonies. That was a big memory for him.’

After the war, Mr Levy returned home to his parents and two brothers in Hull before, at the age of 24, marrying 18-year-old Doreen in 1950. The couple had Judith and other daughter Ruth.

Mr Levy joined his father at his menswear shop, where according to family folklore, an erroneous delivery of men’s suits arrived one day in extra-large sizes.

Rather than return them, he placed an advert in the Daily Express for ‘outsized’ men’s clothing and swiftly sold out, giving rise to the idea of selling more.

Within years, he had established High and Mighty. He eventually retired in the 1990s. Most of High and Mighty’s stores was bought by online retailer the N Brown Group in 2009.

For all his success, Mr Levy – who had six grandchildren and four great-grandchildren – remained humble to the end.

Judith added: ‘In his eyes, he was just a very lowly soldier and very self-deprecating about his role.

‘He even went to Hitler’s bunker, but never saw the enormity of it all. He was a great dad, a lovely man and had so much humanity.

‘Without a doubt, being at Belsen gave him that compassion.’

Inside Coleen and Wayne Rooney's Ibiza holiday: WAG glams up in midriff-baring pink dress with pals

Rape and sexual offences are at their highest level ever, according to the ONS