The Lancet medical journal criticized the Supreme Court’s leaked draft suggesting the overturn of Roe V. Wade, claiming the justices would have ‘women’s blood on their hands’ if they strike down the landmark abortion case.

The world-renowned, peer-reviewed publication warned in its latest issue on Thursday that an end to Roe V. Wade would cause women to risk their health and seek unsafe abortions.

‘The fact is that if the US Supreme Court confirms its draft decision, women will die,’ the publication wrote in its editorial. ‘The justices who vote to strike down Roe will not succeed in ending abortion, they will only succeed in ending safe abortion.’

‘Alito and his supporters will have women’s blood on their hands,’ it concluded, referring to Justice Samuel Alito, who wrote the draft majority opinion of the court that was leaked last week, spurring pro-choice protests at the Capitol and in front of the six GOP-appointed judges’ homes. 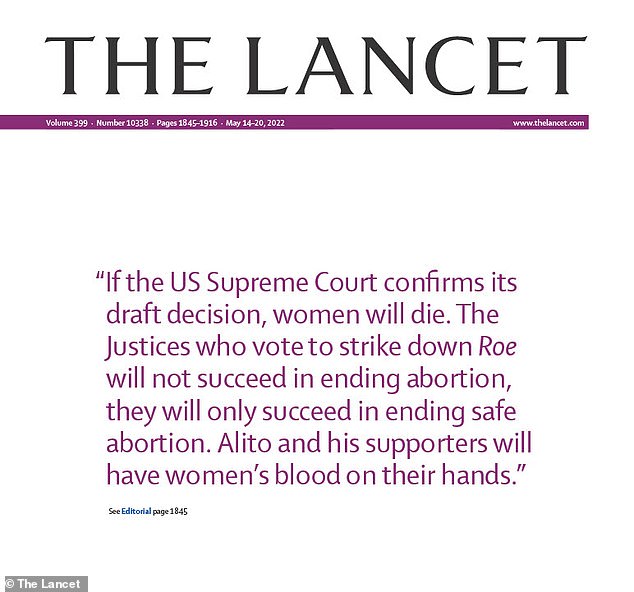 The Lancet medical journal warned in its latest issue on Thursday (pictured) that an end to Roe V. Wade would cause women to seek unsafe abortions 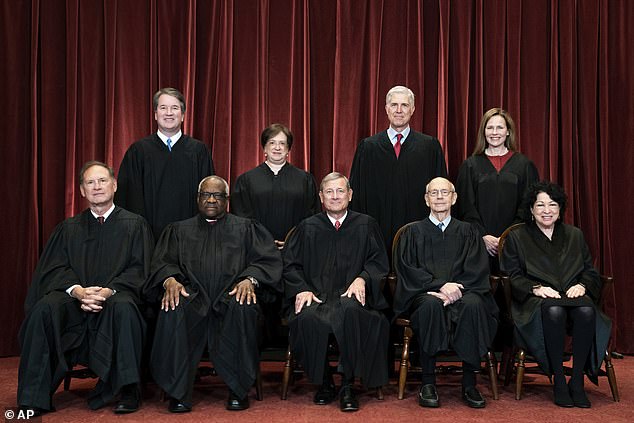 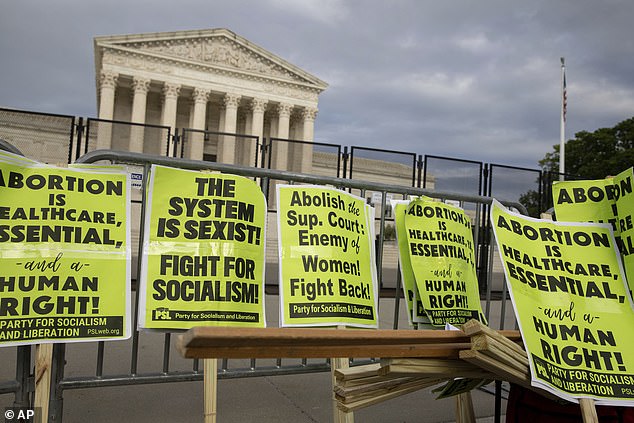 The leak has led to dozens of doctors and medical experts calling on SCOTUS to maintain Roe V. Wade while pro-choice advocates continue to protest at the Capitol and by the homes of the six GOP-appointed justices. Pictured, the Supreme Court with anti-protest fencing

Speaking on the medical consequences of the possible overturn, The Lancet’s editorial board estimated that about 33 million women undergo unsafe abortions around the world every year, and the number would shoot up if the U.S. ends Roe V. Wade.

‘If the court denies women the right to safe abortion, it will be a judicial endorsement of state control over women—a breathtaking setback for the health and rights of women, one that will have global reverberations,’ the Lancet wrote.

Leaving abortion rights to states would also mean those who lack the means to travel to another state with lax restrictions would be more likely to seek unsafe methods of terminating their pregnancies.

The medical journal also noted that black women would receive the brunt of the impact because the demographic has higher unwanted pregnancy rates as well as higher maternal mortality rates.

The medical journal implored the justices to reject the draft opinion and make their decision focused not on the Constitution, but on women’s health needs.

‘What is so shocking, inhuman, and irrational about this draft opinion is that the Court is basing its decision on an 18th century document ignorant of 21st century realities for women,’ the Lancet wrote. ‘History and tradition can be respected, but they must only be partial guides.’

Although it uses much harsher wording, the Lancet’s editorial echoes the warning of other medical journals and doctors worried about the future of Roe V. Wade.

Scientific America and The New England Journal of Medicine, as well as dozens of doctors and health experts across the country who joined Columbia University’s Public Health Department in penning a letter to SCOTUS, highlighted fears that unsafe abortions would soar in the shadows if the justices go through with the draft opinion leaked last week.

The experts warned that mortality rate for unsafe abortions was 14 times higher than legally induced abortions, and said that banning abortions could lead to a 21 percent increase in pregnancy-related deaths in the U.S.

‘As public health experts, we urge SCOTUS to consider science and public welfare in affirming the constitutional protection for abortion,’ the experts wrote. 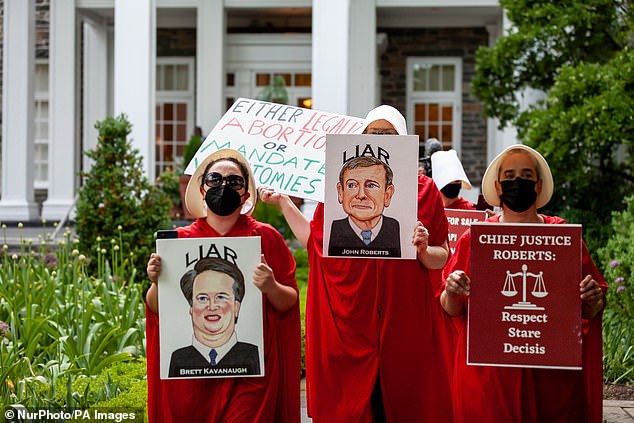 Protesters showed up outside the Chevy Chase Club in Maryland where Justice Brett Kavanaugh is a member. Kavanaugh, Clarence Thomas, Neil Gorsuch, Samuel Alito and Amy Coney Barrett are all poised to strike down Roe V. Wade 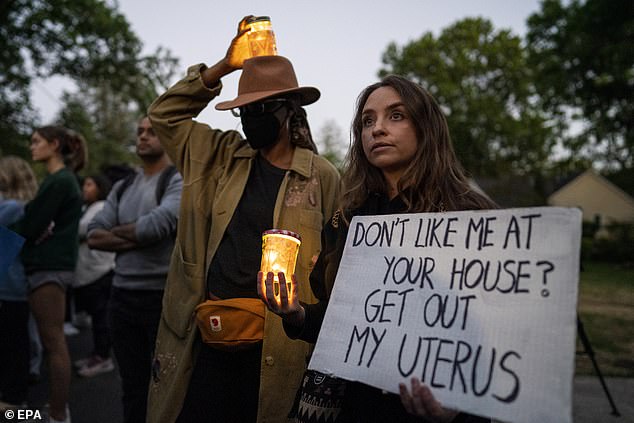 Alito, who authored the draft opinion that was leaked, has seen the bulk of protesters outside his home in Alexandria, Virginia 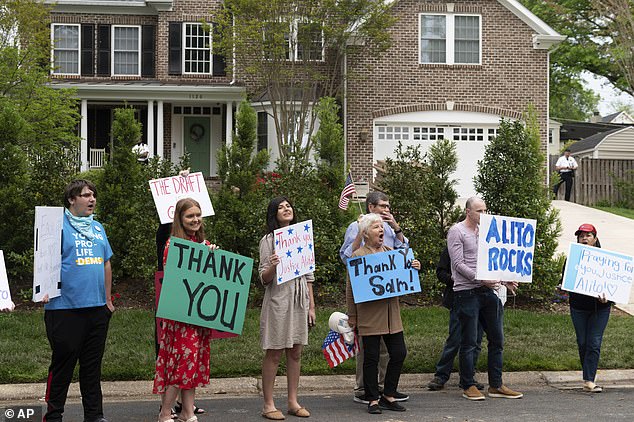 The warnings over women’s health came as a result of Alito’s opinion, which overturns the landmark case that made abortion legal in the country and remains only circulated draft pending, Politico reported.

The draft opinion could change before the court formally unveils its ruling in the Mississippi abortion case, Dobbs v. Jackson Women’s Health Organization, at the end of its term in late June or early July.

Many are watching Chief Justice John Roberts, wondering what he will do, and seeing this case as the biggest test of his leadership.

He could try to get one of the other conservative justices to withdraw their support from Alito’s opinion and join him in a more centrist opinion that wouldn’t formally overturn Roe but would uphold Mississippi’s 15-week cut off for performing most abortions.

That would maintain some federal guarantee of abortion rights. Overturning Roe would return the abortion issue to the states, letting each one make their own law.

Tensions between both sides on the abortion debate have skyrocketed as anti-demonstration fences have gone up around the Supreme Court building where the justices reconvened on Thursday.

Demonstrations have also taken place outside the conservatives justices’ houses as pro-choice advocates continue to urge the judges to maintain the 1973 landmark case.