Embattled Cleveland Browns quarterback Deshaun Watson has reached confidential settlements with 20 of the 24 women suing him over allegations of sexual misconduct, according to the plaintiffs’ attorney.

The NFL star previously told reporters he had no plans to settle the lawsuits and has maintained his innocence since first being accused of sexual misconduct by female massage therapists 15 months earlier. Specifically, Watson has been accused of forcing two women to perform oral sex on him, ejaculating on three women, and forcibly kissing another, while 18 women say he touched them with his penis during massages.

‘Today I announce that all cases against Deshaun Watson, with the exception of four, have settled,’ plaintiffs attorney Tony Buzbee said in a statement. ‘We are working through the paperwork related to those settlements. Once we have done so, those particular cases will be dismissed. The terms and amounts of the settlements are confidential. We won’t comment further on the settlements or those cases.’

Two grand juries have declined to press charges against Watson over complaints filed by women who have already sued the 26-year-old quarterback.

The NFL has an ongoing investigation into the claims and can still punish Watson for violating the league’s personal conduct policy, with or without a guilty verdict. 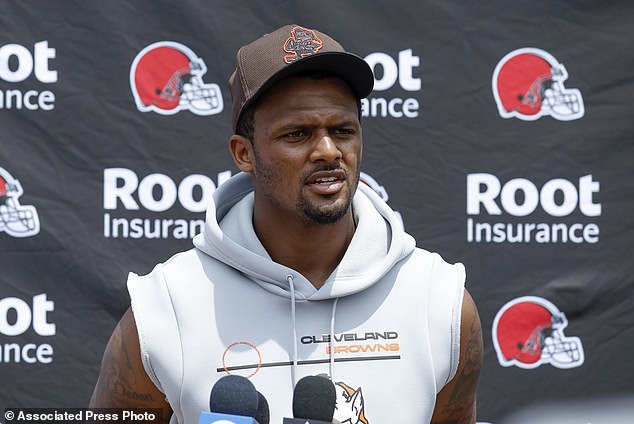 Embattled Cleveland Browns quarterback Deshaun Watson has reached confidential settlements with 20 of the 24 women suing him over allegations of sexual misconduct, according to the plaintiffs’ attorney

One of the four accusers who have not settled their case with Watson is Ashley Solis, who was the first plaintiff to file a lawsuit.

‘The cases against Deshaun Watson started with one phone call, from one brave and strong woman,’ Buzbee stated. ‘That woman was Ashley Solis.

‘As a result of Ashley’s lone but brave voice, soon many women who had allegedly experienced the same conduct were emboldened to step forward. I am incredibly proud to represent them all. They have endured vile criticism and fanatical ignorance.’

Pauline Hanson told transgender woman it was ‘her choice’ to transition