The crushing event was part of a new safety initiative to eradicate the dangerous vehicles from the city streets in which the bikes will be turned into scrap metal and recycled.

Adams called the bikes ‘destructive piece[s] of machinery,’ and waved a checkered white and black flag, before the giant bulldozer rolled over and crushed a total of 92 bikes, The New York Post reported. 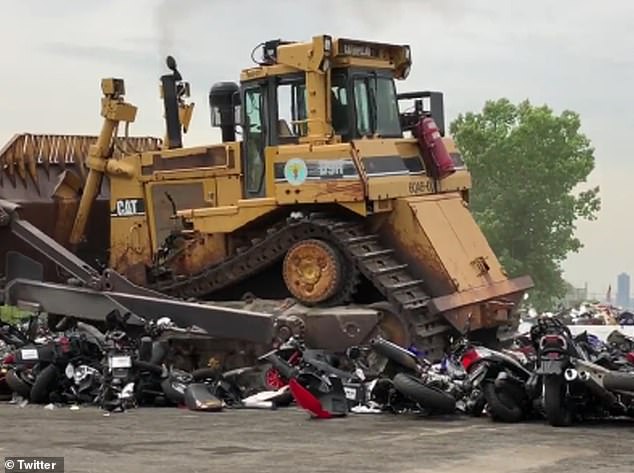 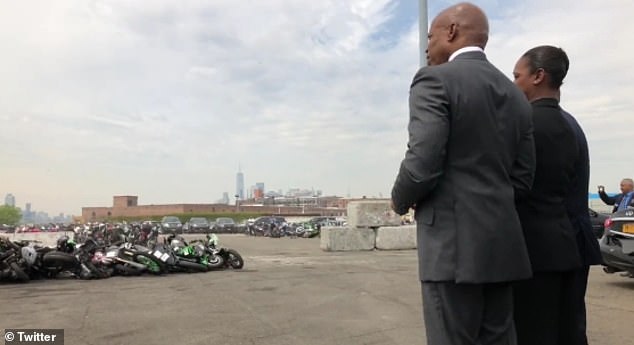 Adams called the bikes ‘destructive piece[s] of machinery,’ and waved a checkered white and black flag before the giant bulldozer rolled over and crushed a total of 92 bikes

During the presser, Adams said he was ‘making good on his promise’ in eradicating these menacing bikes in an effort to ‘make all of our boroughs a place where people can move about.’

‘The NYPD heard the call, and they did a Herculean task to get rid of these loud, intimidating and dangerous and illegal dirt bikes and ATVs that are on our streets,’ Adams said.

The bikes are not street legal, the news outlet reported.

Approximately 900 bikes and ATVs have been removed off the city streets so far this year, an 88 percent increase from 2021, the Mayor said.

The bikes are not street-legal in the city.

On Tuesday when city officials posted the video of the bulldozer at work with the caption: ‘Own a dirt bike in New York City? Ride around and find out what happens to them,’ some people spoke out about the initiative.

‘Could have donated them to a school, teach kids how to take them apart, how they work, then put it back together. Gotta think outside of the box instead of making everything an Adam’s Show,’ one person wrote.

Another said:  ‘PS 220 JHS doesn’t even have air conditioning in most of their classrooms …. But this is your priority ???

‘I can’t take this city seriously anymore,’ wrote another.

While some asked: ‘What about the criminals?’

Many New Yorker have lost faith in Mayor Adams amid the rise in crime.

While murders and shooting are down 9.9 and 7.9 per cent, respectively, from last year, overall crime is up nearly 40 percent so far in 2022, according to police statistics.

These crimes have been rampant in the New York City subway system. 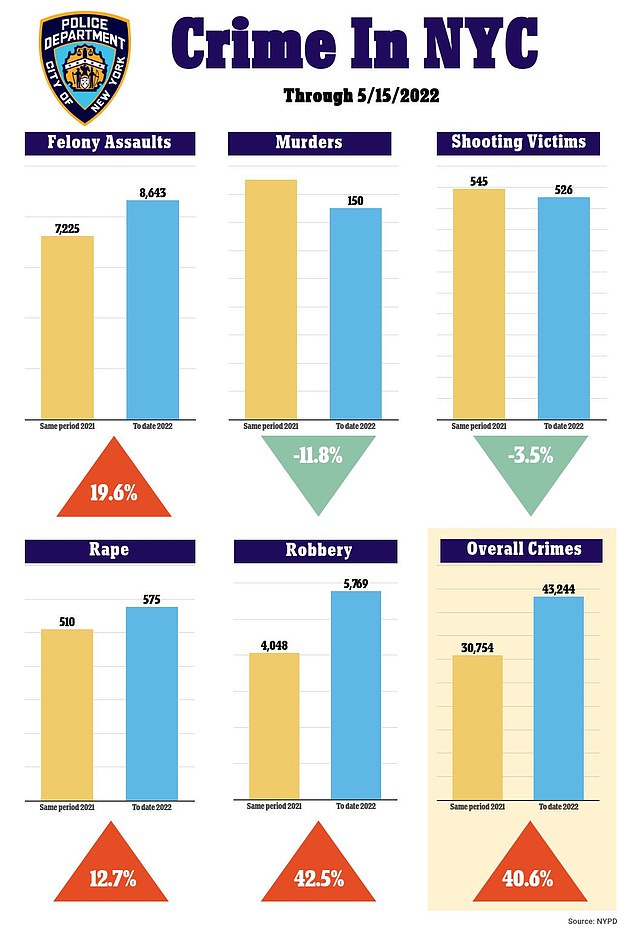 In February, Deloitte analyst Michelle Go, 40, was killed when she was pushed in front of a subway train in Times Square station by a mentally ill homeless man.

In March, Christina Yuna Lee, was followed into her Manhattan apartment building and stabbed her to death in her own apartment.

In May, Frank James, 62, set off smoke bombs inside a subway care in Sunset Park, Brooklyn then sprayed the car with gunfire, injuring 10 people.

Barbara Gustern, 87, a revered voice coach, was shoved to the ground in March by a complete stranger, causing her to fatally strike her head, according to authorities.  Lauren Pazienza, 26, a Long Island native, who worked as a publicist and was set to get married, was arrested and charged for her death.

Earlier this month, Theodore Ellis, 52, grabbed a woman and threw her onto the train tracks in the Bronx. She survived but suffered numerous injuries, including a broken collarbone.