Boris Johnson is preparing to sign off a bailout worth hundreds of millions of pounds for major industries threatened with ruin by the energy crisis.

Last night, it was reported that support would most likely come in the form of loans, rather than handouts or a price cap. 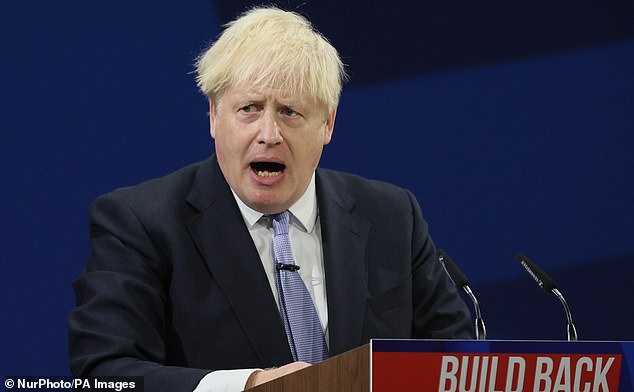 Mr Johnson is understood to have been convinced that sectors including steel, chemicals, ceramics and paper need short-term help.

After officials at Mr Kwarteng’s department held emergency talks with industry leaders yesterday, the Business Secretary submitted a proposal to Downing Street and the Treasury.

It is understood this stops short of a cap on wholesale prices – which a number of industry leaders have been asking for – but does advocate a short-term subsidy solution.

Industry leaders had warned that factories could close within days without help to cope with spiralling wholesale gas prices.

It follows an extraordinary public row on Sunday when Treasury sources accused Mr Kwarteng of ‘making things up’ when he said he was in talks with Mr Sunak about helping struggling companies.

Last night it emerged that the Business Secretary has succeeded in making the case that many of the threatened firms are competitive – but face a temporary global spike in gas prices.

As a result, he is pushing for a short-term solution to get them through the winter months.

The Chancellor is expected to fall into line despite being sceptical.

The PM’s spokesman turned the screw on Mr Sunak and his team saying: ‘As you would expect, ministers from BEIS (Department for Business, Energy and Industrial Strategy) are working across government, including with the Treasury, on this important issue, the challenges that are currently facing industry in light of global gas prices, and that will continue.’

Asked how he would characterise the relationship between the two departments, the spokesman said: ‘They continue to work very closely together, as the public would expect. This is a significant challenge, and there’s work across Government to mitigate against it.’

Experts at the British Ceramic Confederation, who have been involved in the talks, indicated that progress on a rescue package has been made.

Jon Flitney, its energy and innovation manager, said: ‘We are glad to hear that the Government is considering solutions and we urge them to keep talking with the sector as the situation develops.

‘We eagerly await proposals as to how they will help ceramics companies who are grappling with soaring costs.’

The scale of the power crisis has been likened to the collapse of banks and the financial crash of 2007-2008.

UK Steel boss, Gareth Stace, said: ‘We welcome that Kwasi Kwarteng has put forward a package of measures to offer some support to energy intensive sectors.

‘What must be clear is that these reforms cannot be the only action taken.

‘We need an ambitious programme from government, a Green Steel Deal, to allow us to move towards lower carbon steelmaking. That needs to start with energy price reform, so that the UK competes on an even playing field with France and with Germany.’

She wrote: ‘Our brilliant British industries are a crucial cornerstone of our economy, and we should be supporting them to boost our recovery.

‘The Government should be protecting and supporting them through a crisis which has come about from their own lack of planning. They have a duty to get an immediate grip on this situation, and businesses need reassurance that this is happening.

‘While working people worry about how they are going to pay the bills, the Prime Minister is relaxing in a luxury villa – missing in action once more.’

Nearly 2million over-50s have yet to first Covid vaccine, despite booster drive kicking off already