Calls for the SHOEY to be banned after an American rapper was ‘objectified’ by punters to drink from his shoe at a music festival: ‘Embarrassed to be Australian’

It is one of Australia’s iconic traditions that doubles up as both a hazing punishment or celebratory ritual – made increasingly popular by famed sportsmen like Formula One driver Daniel Ricciardo and UFC fighter Tai Tuivasa.

But the shoey – the practice of pouring alcohol into a sweaty shoe then sculling it – has come under attack as critics – including prominent Australian musicians – call for it to be banned after an American rapper was left ‘objectified’ by punters at a popular festival.

Tyler, The Creator, was performing at Splendour in the Grass in Byron Bay last month when his show was repeatedly disrupted by members of the crowd chanting ‘Shoey’.

He was not the only musician who was subjected to the cry – which made a regular appearance during many acts.

Tyler was again acquainted with the unusual request to drink from his shoe when his Call Me If You Get Lost tour visited Sydney’s Qudos Bank Arena last weekend. 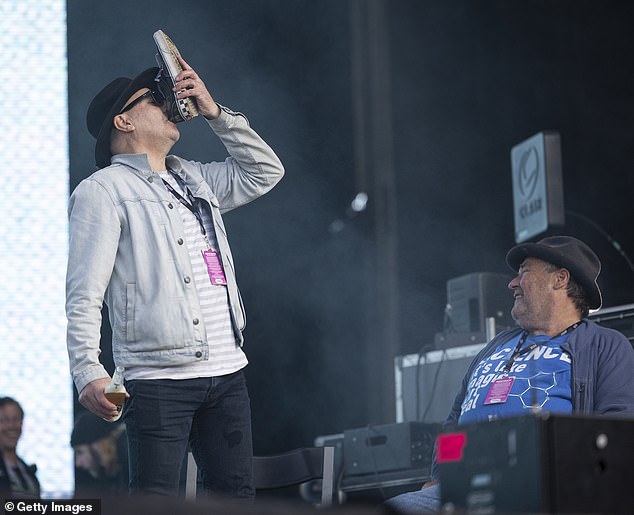 There are calls for the ‘shoey’ chants to be banned from live music festivals. Pictured: Australian artist G Flip’s father thrills the crowd by drinking out of his shoe at the 2022 Splendour in the Grass 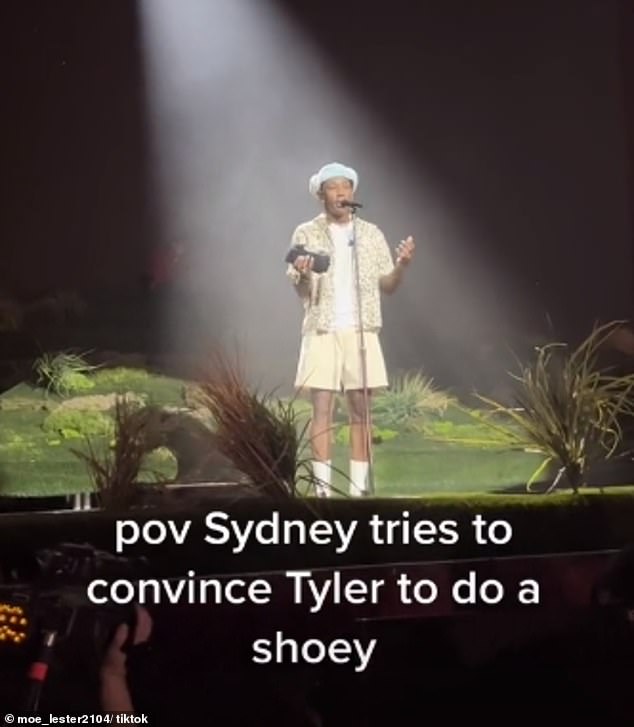 Tyler, the Creator (pictured) was harassed by Aussie fans to drink out of his shoe at a series of his live gigs in Australia

After the irritated star declared ‘no, I don’t give into peer pressure’, many revellers started shouting ‘boo’.

‘I don’t give into peer pressure.’

As the boos rang out, the rapper compromised, offering to spit on his leg instead – leading the crowd to erupt in a rapturous cheer.

But while some have found delight in trying to convince artists to carry out the stunt between sets, others have been left ’embarrassed’ to be Australian.

Music blog Purple Sneakers this week shared one of its articles on Instagram calling for Shoeys to be barred from live gigs.

The post was quickly flooded with support – including from a series of Australian artists like Eilish Gilligan, Gordi, and Slowly Slowly.

‘It’s soooo boring and embarrassing every time Australian crowds do this,’ one social media user wrote. 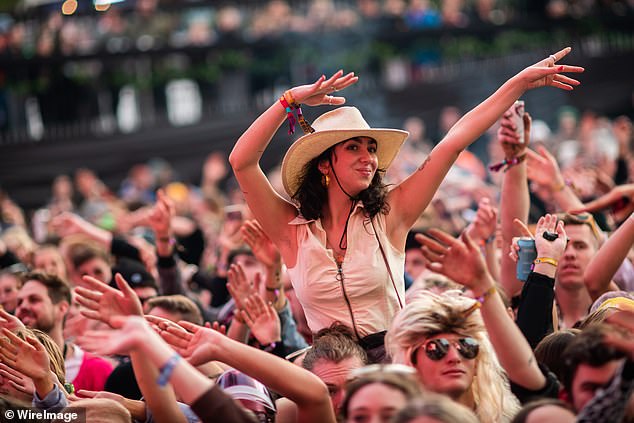 Many artists were asked to partake in the Aussie tradition at Splendour in the Grass last month. Pictured: Festival-goers at the Byron Bay festival on July 23

‘They even do it to artists who are sober and whose music explores themes of addiction and sobriety!? Why the f*** are you at the show if your only interest is seeing someone swig booze from a boot?’

Another said: ‘It’s also just stupid to think that an international artist even knows what a shoey is! It’s a footy thing… Keep it in that realm or shout it to Aussie artists. People who more fully understand bogan culture.’

‘I literally can’t even go to a festival these days because of the younger generation’s misunderstanding of how to behave… It’s totally demoralising and not okay,’ another person said.

Canberra music store Songland Records said they were glad Purple Sneakers had drawn attention to how embarrassing the custom is for Australians. 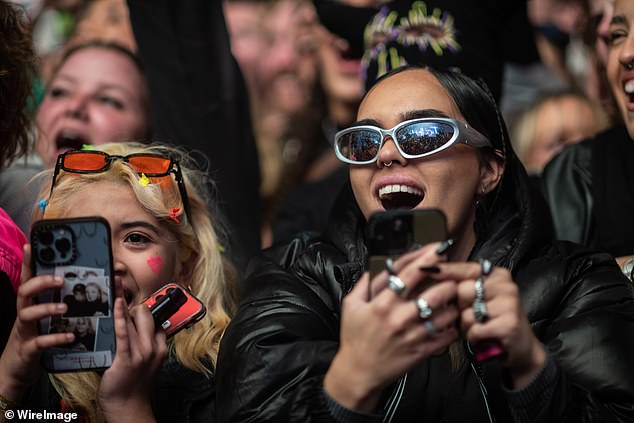 Pictured: women cheer in excitement as they watch musicians at the Byron Bay festival last month

‘It [the shoey] really needs to be forgotten about as it’s an ugly blight on our live scene,’ the business wrote on Facebook.

‘It’s off putting to (nearly all) our Australian performers, and can only make our international performers shake their heads and mark down our report cards.

‘The ONLY time we should be calling out Shooey in Australia is when we see [musician] John Schumann on stage….or if you see him riding around the streets of Adelaide.’

However, while some artists have been less than impressed by rowdy Aussie crowd’s requests – others have taken it in their stride.

During Melbourne musician G Flip’s performance at the 2022 Splendour in the Grass, her father thrilled the audience by walking onto the stage and doing a shoey.

In 2017, UK musician Stormzy wowed the crowd after sculling champagne from his trainers in Sydney’s Enmore Theatre to celebrate his 24th birthday.

We Are FSTVL 2022: Who's playing, how to get tickets and everything you need to know for the weekend