Campers furious at being woken by a commotion outside their caravan change their tune when they realise a 2.5-METRE crocodile was sitting on their doorstep

Campers were flabbergasted to find a crocodile lying right across their caravan doorstep at a popular tourist holiday park.

The group woke up to a ruckus outside before being warned, ‘don’t come outside’, by park staff and holidaymakers early on Tuesday.

Nyomi Hogan, from the Dundee Beach Holiday Park west of Darwin, told Daily Mail Australia she was woken up by a guest telling her there was a croc in the park. 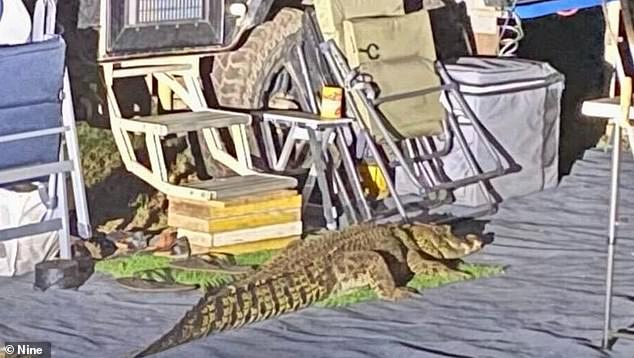 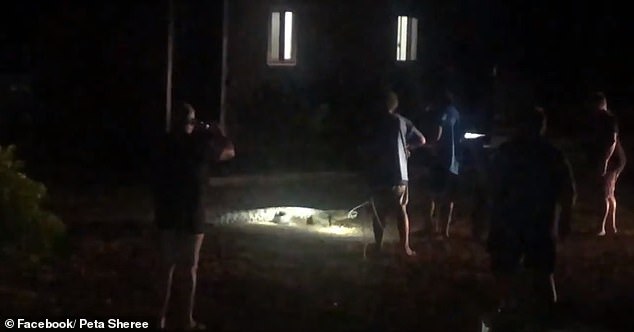 Dundee Beach Holiday Park @ 1230am – We woke to find a 2.5m croc walked through the park (we are at the back) looking for dinner and decided to stop opposite our site! One of Matt Wrights NT Croc Hunter ex Guides came to the rescue!

‘I thought it was going to be a small juvenile croc, which is not an issue usually, but it was a 2.5m croc – a completely different situation,’ Ms Hogan said.

‘It was serious, but also quite humorous at the time.’

The croc sat outside the caravan for an hour as the park manager rang around and spoke to others about subduing it.

Ms Hogan said the occupants of the caravan were initially livid as the group had car lights fixed on the reptile, blazing through their windows.

‘They came out to give us a mouthful, saying ‘can you go take your conversation somewhere else, we are trying to sleep.’

When they told the occupant the croc was there he slammed the door shut so hard the door bounced back. ‘That was actually quite hilarious,’ Ms Hogan said.

Footage of the beast later being rounded up with a rope in the middle of the night was posted to social media by another camper, Peta Sheree.

‘We woke to find a 2.5m croc [walking] through the park looking for dinner and decided to stop opposite our site!’ she wrote.

‘We were directly opposite in our swags.’

The beast was caught and tied up before rangers came to collect it, who said it was rare to find a croc at the park.

Ranger Jaylan Marshall said: ‘With the dogs and the food from the barbeques and everything like that, the smells would sort of entice him to come in as well.’ 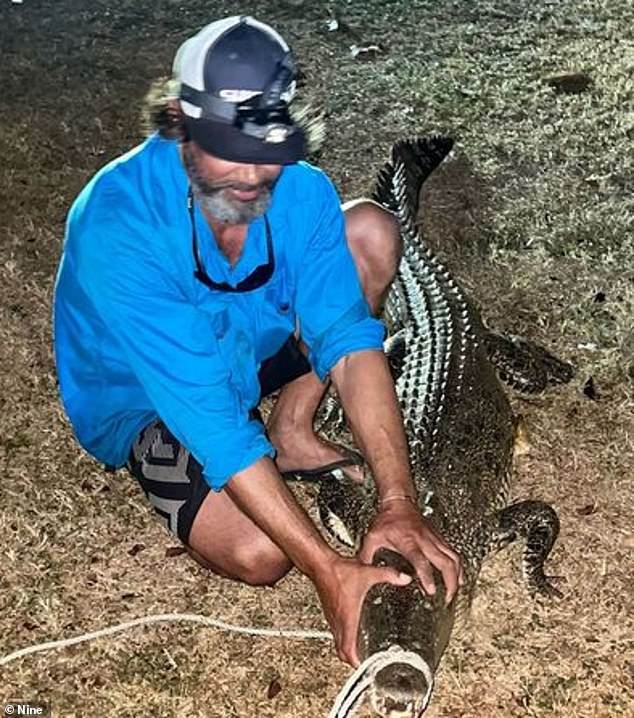 Pictured: The 2.5m crocodile being tied up in the early hours of Tuesday morning after giving campers a fright