A Chicago Catholic private school has become the latest to bend to the woke mob after being branded racist over a video showing white students refusing to dance to a Mexican country song.

The drama was triggered at a homecoming dance at the $13,000-a-year Marist High School on October 9, with bosses there since groveling. They apologized even though students snubbed multiple other songs, including one from Justin Bieber, with furious parents insisting nothing racist took place.

Student Elizabeth Pachecho shared a clip of kids kneeling during Payaso de Rodeo, a 1997 song by the Mexican country music group Caballo Dorado, and framed their behavior as racist, even though they knelt at multiple other points during the night for a host of songs they didn’t like.

She wrote: ‘You send us emails asking for pictures of our families during Hispanic Heritage Month. You hang up our banners of papel picado throughout the school. If you love our food, ethnic fashion, and energy so much… why do you resent us. How would you like it if we kneeled to your country music?’

Her post was subsequently widely-shared and spread to other social media platforms, including TikTok.

DJ Brian Stepanek’s playlist had 60 songs on it – a handful of which were Spanish, including Payaso de Rodeo. 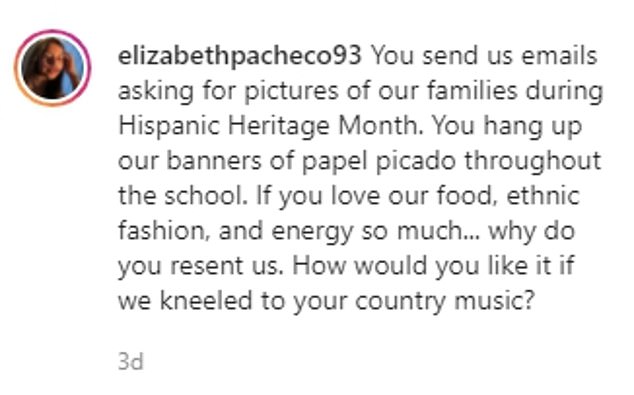 The video was posted on Instagram and was presented as a racist gesture by the white kids by one of the students present, Elizabeth Pacheco. She says she also heard a racist slur before she started filming

The kids crouched down when the song started, which Stepanek says is their way of telling him to skip it because they don’t like it. They did it with other songs too including a Justin Bieber song, according to the parent of one of the kids at the dance.

That father says the kids were trying to control the music and that the incident had nothing to do with race.

‘With 800 kids in attendance and only time allowed for 60 songs to be played, our DJs were constantly being heckled by the students to change up the tunes.

‘Basically, the students just wanted to control our DJs to change the song at that and other times,’ he said in a statement.

Now, disturbed parents tell DailyMail.com they are afraid to speak out about what really happened for fear of their kids being bullied. 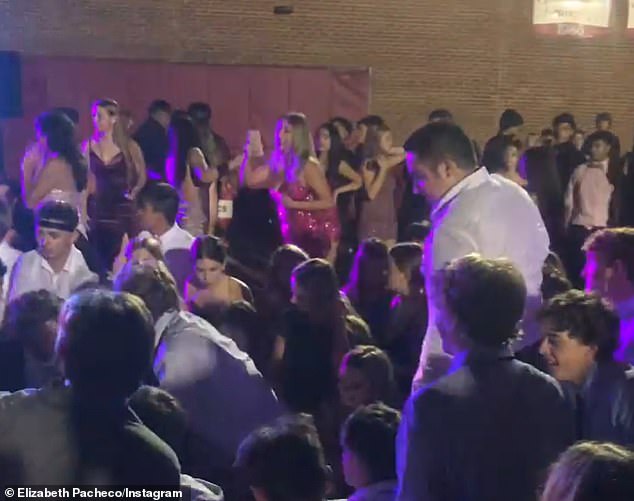 Kids at Marist High School in Chicago were deemed racist on social media because they refused to dance Payaso de Rodeo, a 1997 song by the Mexican country music group Caballo Dorado. But the dance DJ, parents and the school say they also refused to dance to English songs too

‘It’s very disappointing how these events turned out and the depiction of what happened was grossly exaggerated.

‘Now there is more division than ever the school. It’s just sad,’ one mother, whose child attended the dance but who does not want to be named to protect her kid from bullying, told DailyMail.com.

She said other parents feel the same but are too frightened to speak out publicly because they don’t want their child to be bullied.

‘I wish there were [videos of the other songs] the kids refused to dance to. This would have been squashed real quick.

‘Many of the students that attended the dance are afraid to speak out against these students false narrative in fear of retaliation. 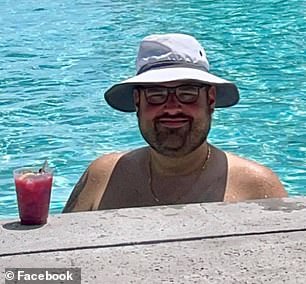 DJ Brian Stepanek says the kids were overexcited and trying to control the music after not having a dance for more than a year due to COVID. He says they refused to dance to many of the songs  – not just the Spanish one in the video

‘My child was [at the dance] but would never openly speak about it. Kids are mean…very mean.’

After Pacheco shared the video, Hispanic students at the school have arranged protests. Pacheco was interviewed by The Chicago Sun Times, telling the newspaper she and other Hispanic kids feel ‘unsafe’ on campus. She also told WGN that before the song, the kids in the video ‘booed’ and made racist comments.

The school promised an investigation and on Tuesday, released a statement saying that the kids didn’t dance to many songs – not just the Spanish ones.

They still went on to apologize to the kids who were offended.

‘At the outset, we acknowledge and apologize for the hurt this incident has caused our students, staff, alumni, and the many others who have expressed their feelings related to the video posted on social media… 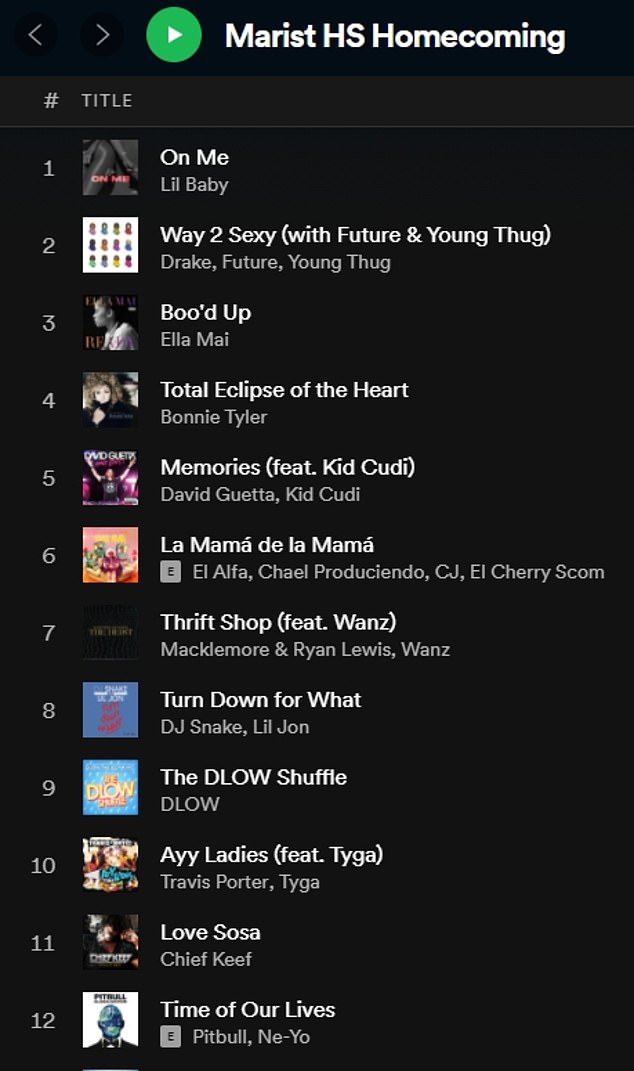 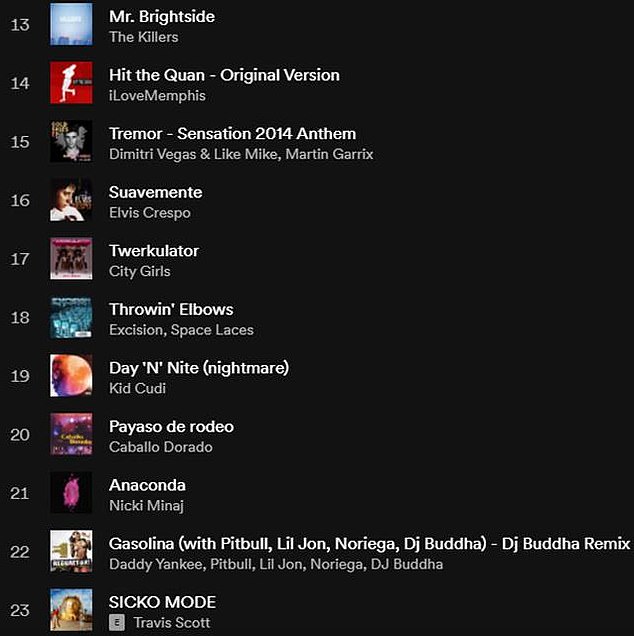 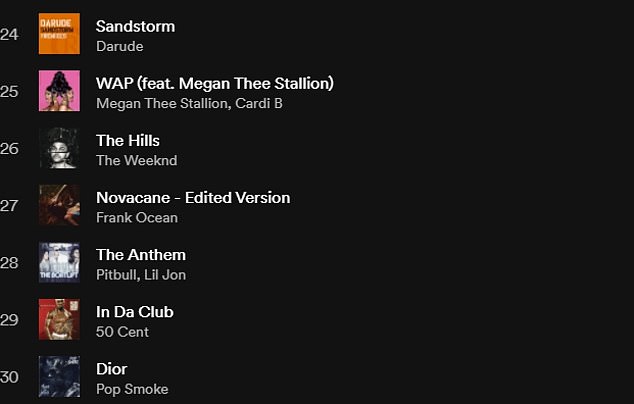 This is half of the full playlist that the DJ used. It includes four Spanish songs including Gasolina and Suavemente, which the kids danced happily to

‘Although these are the facts, we recognize there are still students at Marist who viewed this video or who were at the Homecoming dance that were hurt by these actions.

‘Marist is a family, and when one of us hurts, we all hurt.

‘The fact that there were students who left the homecoming dance hurt by what they witnessed shows us that there is work to do.’

Angry parents say the truth is being ignored and the kids in the video are being unfairly tarnished.

The DJ has also released half of the playlist and says it wasn’t an act of racism and was just a case of kids wanting to control the music.

‘These students have not had a school dance in over two years because of COVID.

‘Because of this, their expectations of the music were very demanding to say the least.

The video went viral on TikTok and Instagram, where users said it was evidence of racism 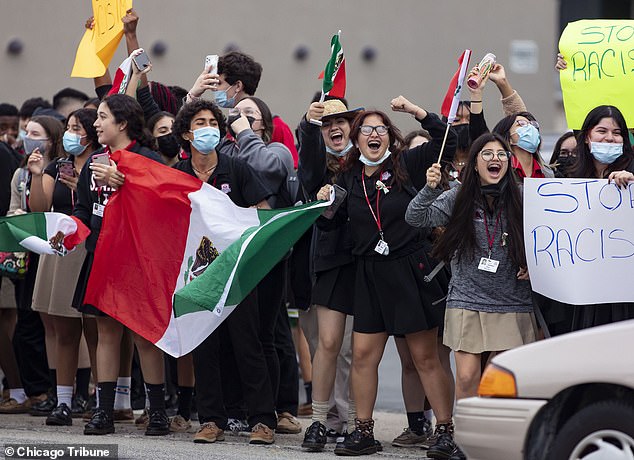 Some Hispanic and Latino students then arranged protests at the school. Pictured, the school yesterday

‘With 800 kids in attendance and only time allowed for 60 songs to be played, our DJs were constantly being heckled by the students to change up the tunes.

‘It appears to us that this same behavior was observed several other times at this dance when the students ‘sat down’ to force our DJs to change the tunes.

‘The opposite of dancing is sitting, right?

‘Basically, the students just wanted to control our DJs to change the song at that and other times.’

They shared a link to the full Spotify playlist that also had Gasolina, La Mama de la Mama and Suavemente on it. 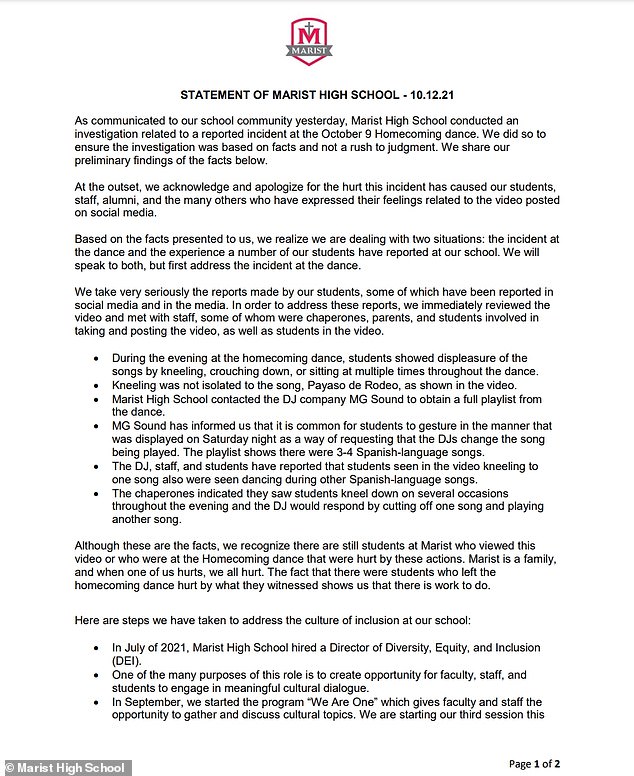 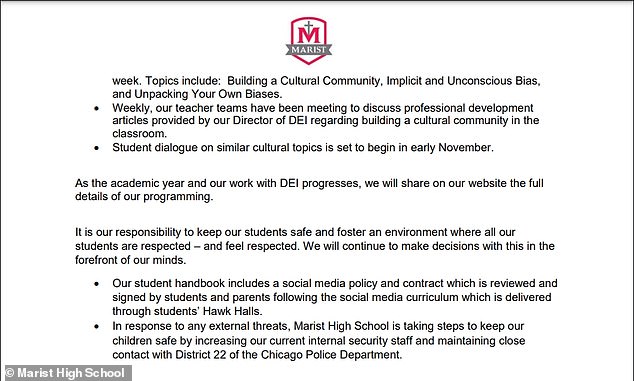 The school issued this apology and statement on Tuesday. It said it had started speaking with the local police department because of ‘external threats’ though it’s unclear who had launched those threats