Make yourself at home! Terrifying moment Connecticut family finds a BLACK BEAR inside their home after it broke in via the garage and rummaged through the freezer . . . and then returned a second time for more food

A black bear crashed the home of a Connecticut family by breaking into its garage and then rummaging through their freezer and later attempted to return for a second time.

On Sunday, Bill Vannie was working on the front yard of his West Harftord home when he decided to grab a refreshment from inside, where he found the bear, according to his wife, Christine.

In footage shared online, the black bear can be seen intruding into one of the home’s rooms while eating marshmallows and peanut butter crackers, Christine told local news outlets.

‘Go on, that way. Go. Get out of here. Go on, go. Take off bud,’ Bill says in the video, attempting to shoo the bear out the home’s open front door. 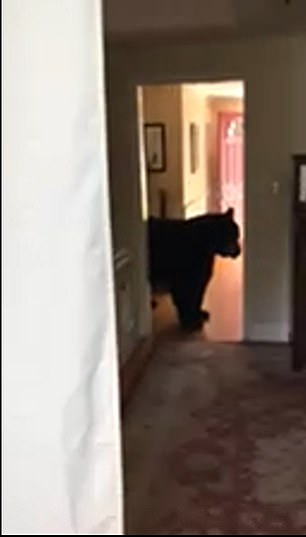 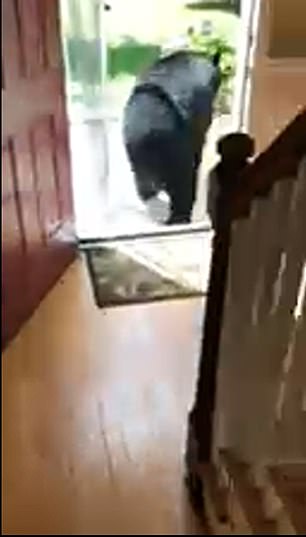 A black bear intruded a West Hartford home on Sunday while both homeowners, Christine and Bill Vannie, were working on the front yard, before it was shooed away 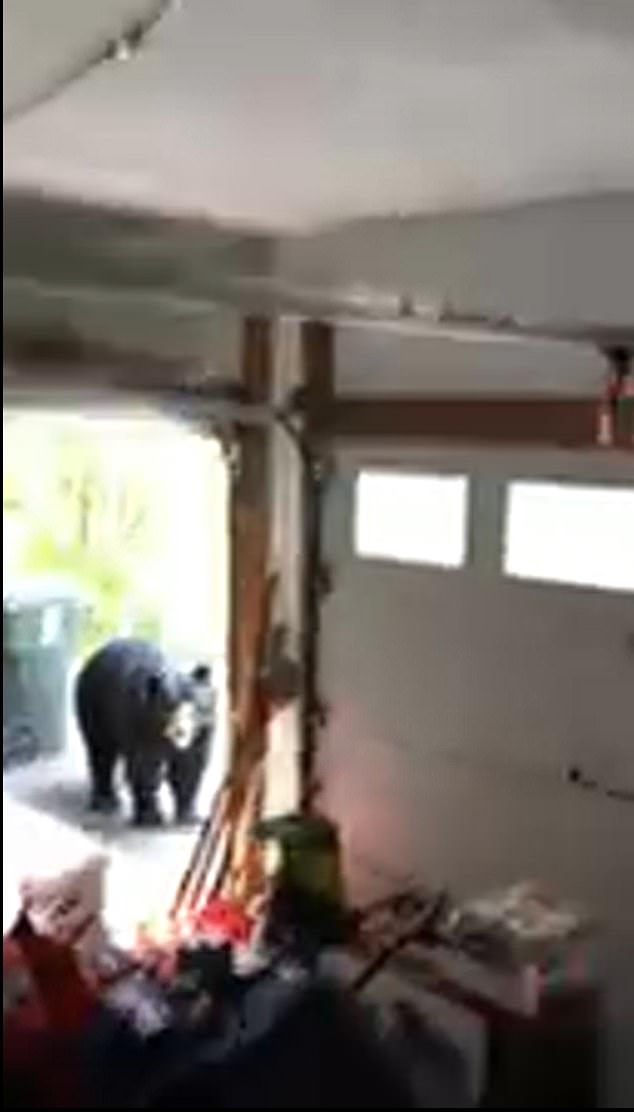 After Bill had shooed the black bear away, the animal attempted to come back inside the home through the back before it was told off once more 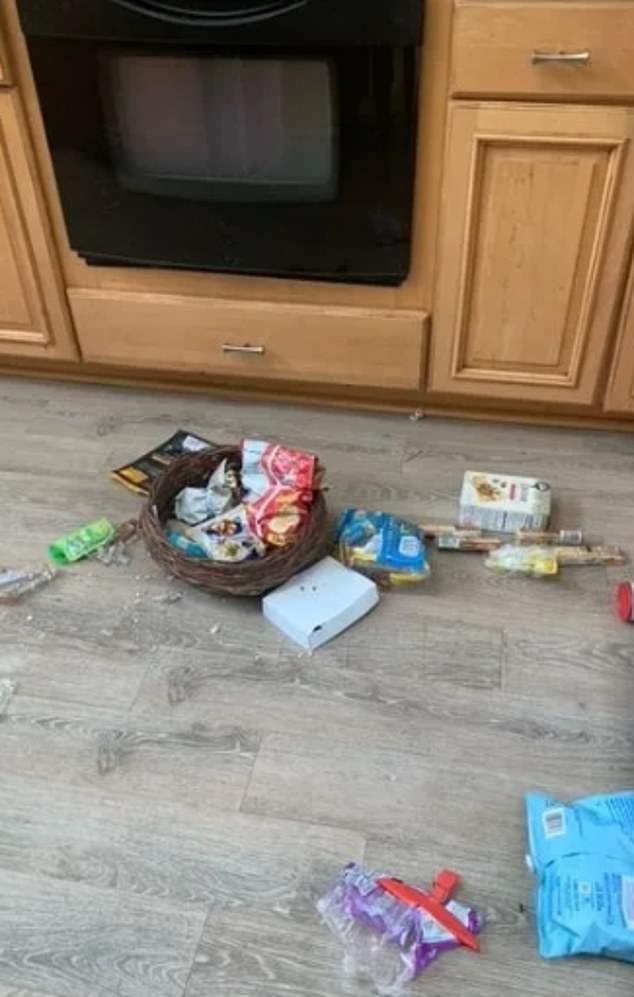 As soon as the animal walks out of the home, Bill slams the front door shut.

The couple also noticed their fridge and freezer had been scoured through by the animal, with food items found on the ground of their garage.

Both accessories also appear to have been damaged as they are titled against the wall.

A day later, on Monday, the same bear returned to the home located on Walker Lane, breaking a screen door, though it didn’t manage to break inside again.

Bill and Christine called the Department of Energy and Environmental Protection (DEEP) to report the incident. 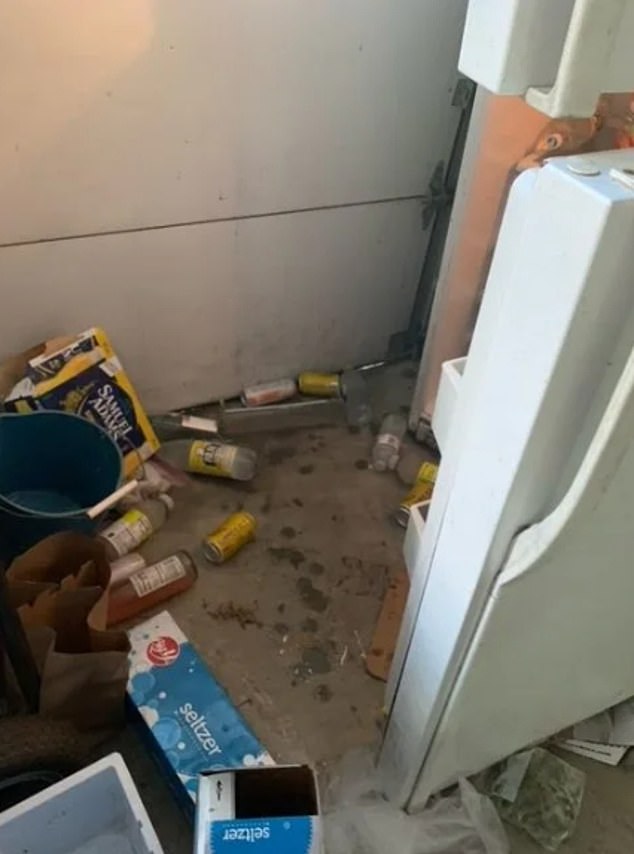 The bear also damaged the couple’s fridge and freezer, as bottles and cans appear on the ground in the home’s garage 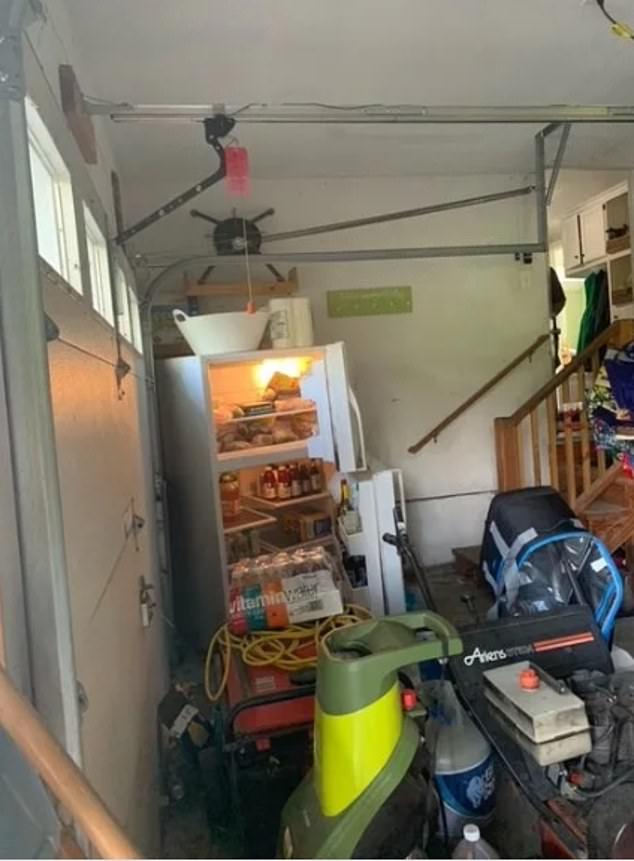 The agency said it’s ‘concerned’ by the bear’s behavior and have provided a direct phone number for Bill and Christine to call should it come to the home again.

DEEP also said that it was going to install a trap in the area to avoid another bear break-in attempt.

Bears are not uncommon creatures in Connecticut, as it’s estimated there are  around 1,200 of them in the state, DEEP wildlife division Director Jenny Dickson told the Courant.

Most bears in the area are black bears, Dickson further said, adding that they are mostly in the Litchfield and Hartford counties in eastern Connecticut.

Rangers advise people not to run from bears and instead make the animals aware of human presence by speaking in an assertive voice, singing or clapping hands together.