A couple have been slammed as ‘morally bankrupt’ after ‘impounding’ a car mistakenly parked on their driveway and claiming the owner had to cough up £100 before releasing it – but cops back it as perfectly ‘legal’.

Barry Newton and his girlfriend Zoe Hameston were baffled when they found the blue Peugeot parked at their home in Haltwhistle, Northumberland, without their permission last week.

The pair took to Facebook to try and track the stranger down and demand they move their car but soon took matters into their own hands by blocking it in with other vehicles and saying it would cost £100 to release it. 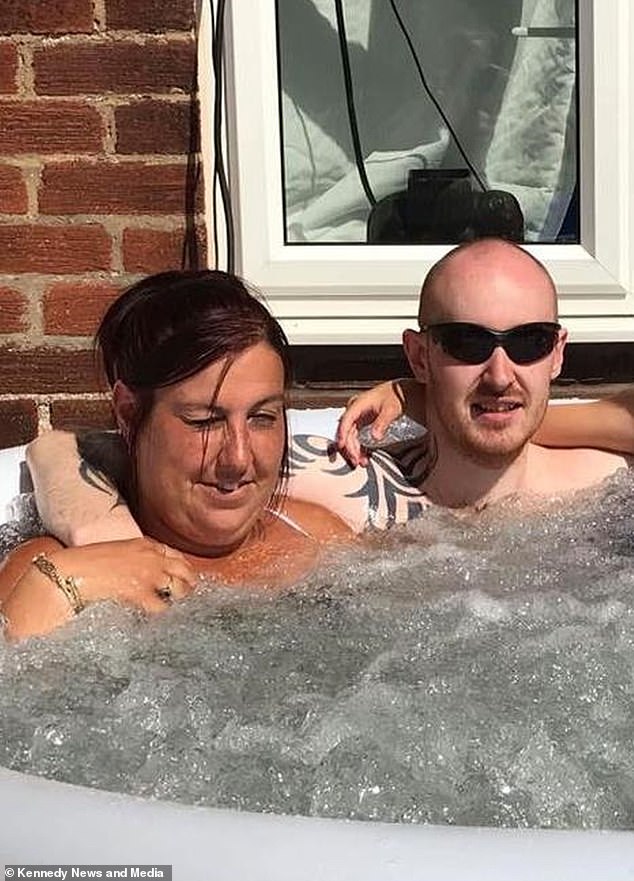 Zoe Hameston, left, and her partner Barry Newton, right, came home to discover a stranger’s car parked on the driveway of their house in Haltwhistle, Northumberland 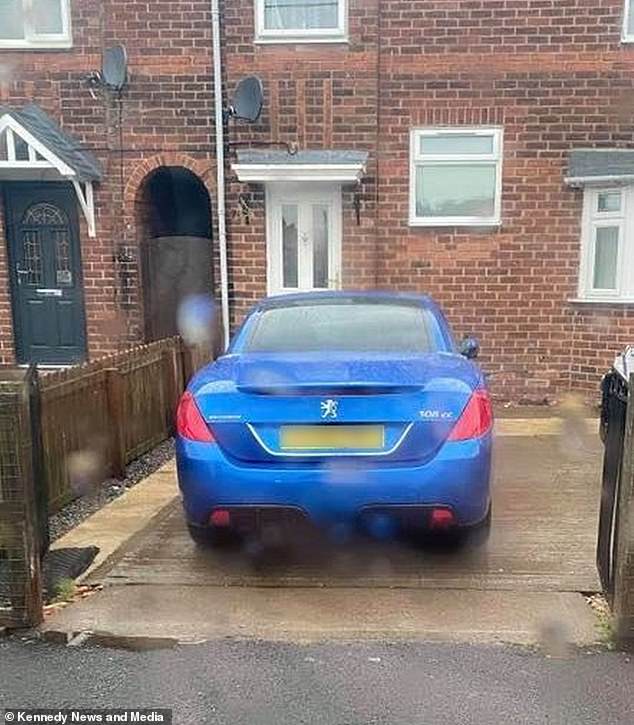 The Peugeot 108’s owner had used an App to book a parking space. Unfortunately for the motorist, a criminal had successfully created a fraudulent listing on Just Park 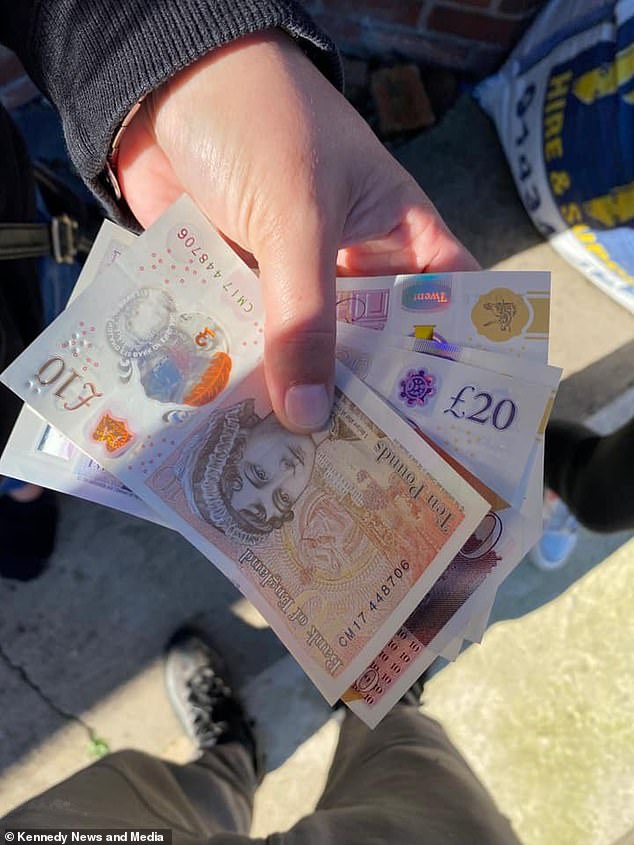 But when police were called to the scene they determined that ‘no crimes were committed’ by either party and so could only offer guidance on the matter.

The car’s owner, apparently the victim of a parking app scam, is believed to have been forced to pay the £100 cash fee to be able to leave with their vehicle.

JustPark confirmed that the rogue parker had used their app but had fallen victim to a ‘potentially fraudulent listing’ and apologised to them for having to pay out the £100.

However JustPark slammed the couple’s decision to ‘take the law into their own hands and impound’ the car as ‘completely disproportionate’ and said they had ‘reacted inappropriately’.

Zoe’s original Facebook post read: ‘Could the owner of this car, registration [redacted], please remove your vehicle from my private driveway within the next 30 mins or I will remove [it] myself, thanks.’

But with no sign of the driver 30 minutes later they took matters into their own hands, closing their gates and blocking the end of the drive to demand a fee for the release of the car. 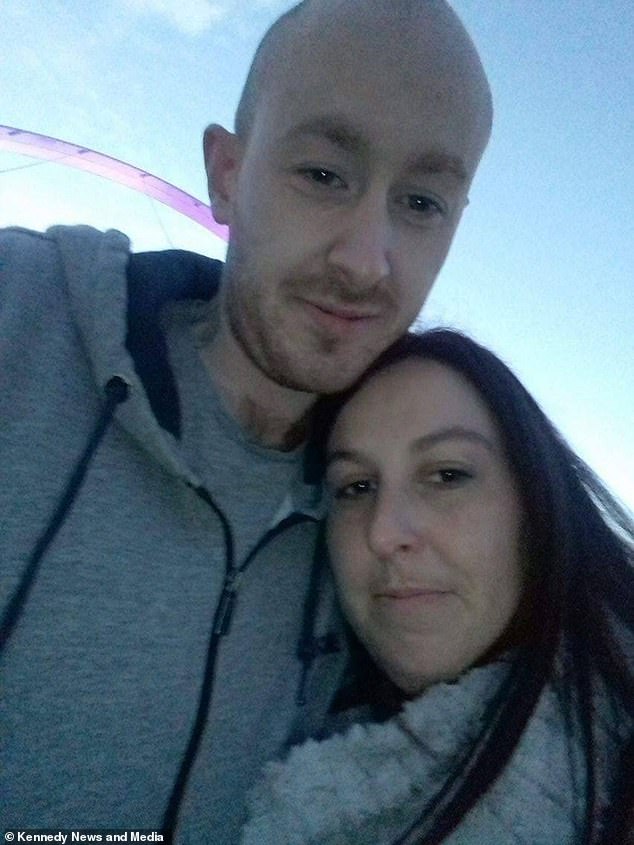 The couple, pictured, have faced criticism on social media for charging the motorist £100. Police attending the scene said no laws had been broken and that the issue was a civil matter

The owner of the car had used a parking app called JustPark where the driveway had been listed as a parking space for hire without the home owner’s knowledge and the Peugeot owner parked there believing they had a legitimate booking.

Despite claiming to have ‘rigorous checks’ in place to ensure adverts are legitimate, the parking app admits that this listing was highlighted as potentially fraudulent when it was submitted back in 2019 but was set live by ‘human error’.

Hours later the unaware owner of the car finally returned to find their vehicle ‘impounded’ – and Ms Hameston claimed she was refusing to release the vehicle until they coughed up.

She said in Facebook comments: ‘[It’s] still f******* here and apparently they have [been] on an app called [JustPark] and have [paid] to park on my sheltered drive with CCTV and lighting.

‘When I have had a look [at] the description [for the advert] they would [have] known something wasn’t right.

When a commenter asked for an update, Mr Newton replied with a photo of multiple notes being handed over to him – prompting people to react in shock.

Officers attended the address in Haltwhistle and offered advice to both parties but in the end it is believed the owner of the ‘impounded’ car was forced to pay up the £100 cash fee to be able to leave with their vehicle.

As the whole incident unfolded live on public Facebook posts, multiple stunned locals commented ‘what a cheek to park on someone’s drive’ and urged the homeowners to ‘clamp it’ and ‘charge them’ to release the car. 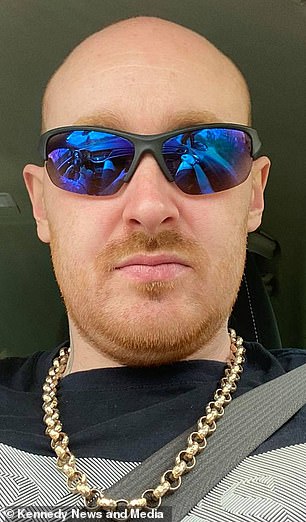 Mr Newtown defended his actions and said he had no proof the car owner was telling the truth as ‘she couldn’t prove it’ when he asked for a receipt.. He said ‘at the end of the day, it’s private property’

Meanwhile others warned that the owner of the car was the ‘innocent victim’ of a scam themselves and insisted that demanding a fee was ‘morally bankrupt’.

One commenter said: ‘There are apps that allow people to rent out their driveway and some scammer may have rented out yours, so the people with the car may be innocent victims too.

‘Terrible behaviour to rip her off knowing she got scammed on a parking app. No shame it seems.’

However Mr Newtown defended his actions and said he had no proof the car owner was telling the truth as ‘she couldn’t prove it’ when he asked for a receipt.. He said ‘at the end of the day, it’s private property’.

Police have advised that the payment of a £100 fee is a civil matter not for police to rule on and have said, should the car owner wish to, they can pursue this to see if they can retrieve the money back through the civil courts.

A Northumbria Police spokesperson said: ‘Shortly after 11.45am on October 5 we received a call from a resident stating that an unknown car had been parked and left on their driveway.

‘Officers subsequently identified the registered keeper of the vehicle and made contact with them.

‘It transpired that the car had been parked at the address by mistake and in good faith. All parties were issued with guidance and officers are satisfied no criminal offences were committed.’

Parking on a stranger’s driveway is not against the law

Parking on a stranger’s driveway is not breaking criminal law, though it could be considered as trespass.

Parking across someone’s driveway, blocking the dropped kerb is a parking offence which could lead to a fine of £100 and three penalty points.

Householders are warned they should not try and move the car on their driveway as they will be responsible for any damage caused.

A householder could seek a court order to have the car removed although if the car has been abandoned, the local council can remove it.

Homeowners seeking to charge a rogue motorists have been warned the driver may be able to reclaim the money following a civil case.

A spokesperson for JustPark said: ‘We have looked into this situation and I can confirm that we were contacted on Wednesday October 6, by a homeowner in Haltwhistle to let us know that a driver had parked on their driveway without their permission, and had a booking through JustPark.

‘We immediately apologised to the homeowner for the situation and made multiple attempts to contact the driver who had parked at the address in question on the mobile number that they had registered with us, so that they could move their car.

‘We also made attempts to contact the person who had advertised this space with us, via telephone and email. In addition, we immediately took down the advert for the space pending sorting this issue out.

‘It is unfortunate that, in this instance, this homeowner (who is not a JustPark customer) took matters into their own hands and impounded the driver’s car and demanded a fee for its removal.

‘We have rigorous checks in place to ensure that driveways that are advertised on our platform are done so in a proper way.

‘The advert for this space was submitted to us back in 2019 and our fraud team did highlight this space as potentially fraudulent, but I can see that a number of weeks later the advert was set live – this was human error on our part and we can only apologise for this.

‘Like all companies, we are sometimes the target of fraudulent activity and our fraud teams work hard to detect this and to protect our customers.

‘We have thousands of adverts submitted to us every month and the vast majority are genuine – we pride ourselves on being able to help homeowners generate an additional revenue stream, as well as being able to help drivers find affordable and pre-bookable parking spaces in locations that are convenient for them.

‘We park over 1.5 million cars every month and generate over £50 million each year in parking transactions for our space owners, and have overwhelmingly positive reviews from customers.

‘On the very few occasions that there are complications between drivers and space owners due to a misunderstanding, we can usually resolve these quickly and amicably.

‘In situations like this, we would always ensure that the homeowner is compensated appropriately.

‘However, this incident escalated disproportionately because the homeowner, who isn’t a JustPark customer, reacted inappropriately and completely disproportionately and took the law into their own hands, impounding a vehicle which was parked by a driver who believed that they had a genuine booking.

‘The booking in question was of course fully refunded last Wednesday. We have additional rigorous checks in place before any space owners can withdraw their earnings, which further prevents any fraudulent activity on our platform.

‘We are now in contact with the driver to understand what steps we can take to help resolve this situation.’

Another night of carnage: Police clampdown on revellers holding parties in parks

Family of missing Anthony ‘AJ’ Elfalak in Putty, NSW, fear he was abducted as ute is seized