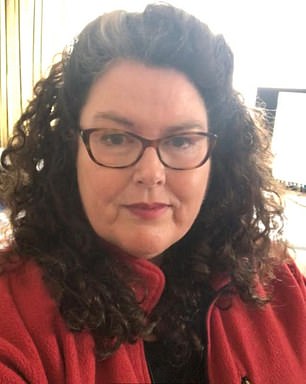 Gladys Berejiklian and Kerry Chant relied on a combination of lower case numbers and high vaccination rates to set the benchmark opening date for residents in NSW, a leading health expert revealed.

Epidemiologist Professor Catherine Bennett said population level protection from vaccination coverage had hit its ‘peak’ in the lead up to the easing of restrictions.

‘A whole series of things have changed in recent times, the most important one is the vaccination rates that set the opening date,’ Professor Bennett told Daily Mail Australia.

‘More than 50 per cent of recipients have had their vaccination within the last six weeks so people are still at their peak protection.’

Professor Bennett believes the timing of the state’s reopening supports a period of maximum risk reduction for infection and transmission among the double-jabbed.

‘With vaccination coverage – that’s lower infection rates in the community than we’ve seen in a long time combined with the best window of protection – means a transition period similar to Denmark rather than the UK,’ she said.

‘The UK was on a case rise when they opened and it continued to expand the wave. Whereas in Denmark, they were on the way down. 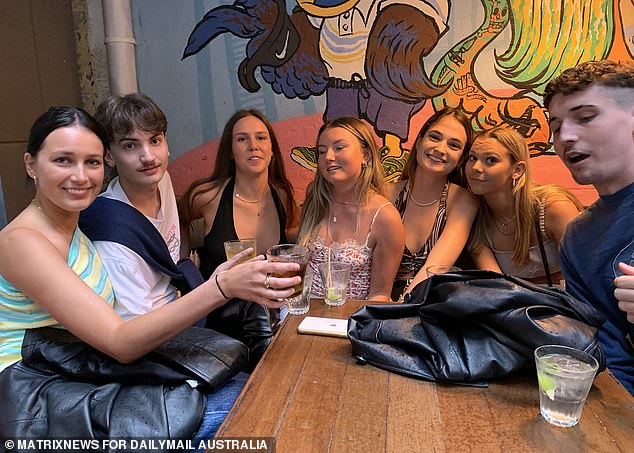 Sydneysiders have flocked to restaurants, cafes and pubs as New South Wales opened up to the fully-vaccinated on Monday

‘They reached a point where they could cope with case numbers because they had lower hospitalisations and they eased out restrictions like what Sydney is doing.

‘That’s what you’re looking for easing into that next stage which is managing the virus without being in lockdown,’ she added.

Driven by high vaccination rates the UK lifted lockdown restrictions as part of its controversial ‘Freedom Day’ in July.

Relying on vaccination uptake saw a record jump in daily case numbers with the UK forced to consider reintroducing restrictions on gatherings and mask mandates.

Whereas Denmark eased all Covid-19 restrictions in September, deeming the pandemic as ‘under control’ and no longer considered a ‘critical threat to society.’

Professor Bennett has warned case numbers could still rise as Sydneysiders jump back into the community to make the most of their newfound freedoms but it won’t be astronomical. 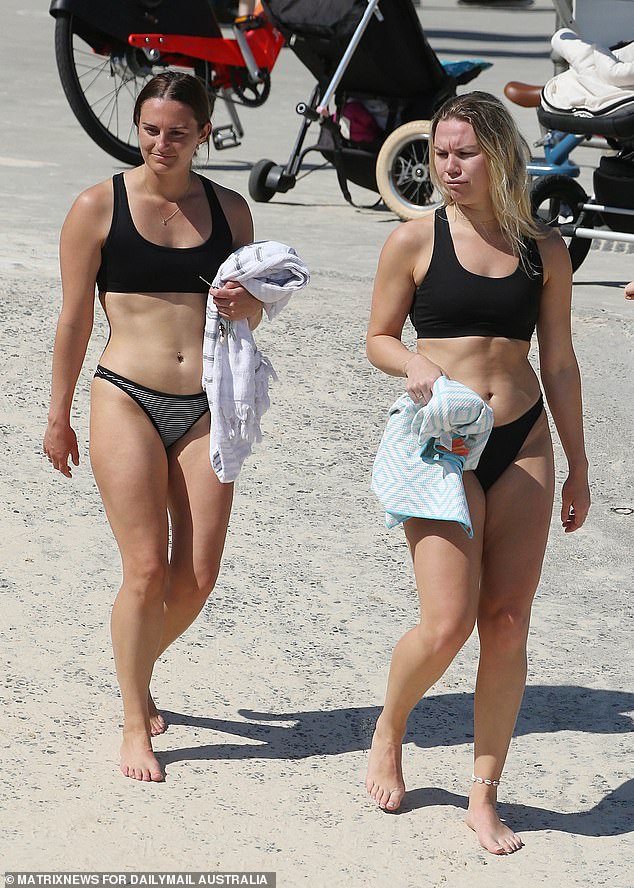 Case numbers plunged to 360 infections in NSW on Tuesday, the lowest the state has seen since August

‘Cases might well bounce as we open up – we have seen people dive in quite quickly so we might see a rise in cases,’ she said.

However she said there could be a mixed community response, with some people still anxious over reopening and less eager to dive into eased restrictions as quickly.

‘So there will be a bit of a steady build up,’ she said.

Despite the possibility of a rise in case numbers, Professor Bennett believed future lockdowns were highly unlikely in areas with high vaccination rates – as NSW hit 90 per cent single dose vaccination coverage this week.

‘It will only be if you’ve got very low vaccinations in the pocket of the community or there’s something about the nature of the outbreak that puts people at risk – so the people who can’t be vaccinated, or have chosen not to be vaccinated,’ she said.

Despite case numbers plunging to 360 infections on Tuesday – the lowest NSW has seen in two months – Prof Bennett warned residents should still be mindful of transmission risks. 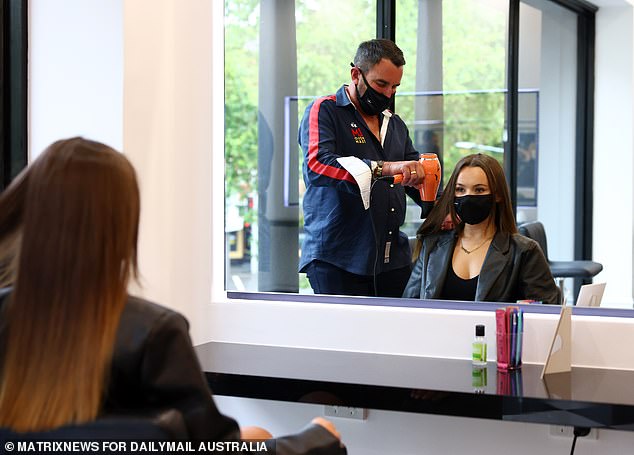 ‘People should think carefully about having people over and if you can have them outdoors, that makes it a less risky process,’ she said.

‘Go out and support the businesses, have a meal out that’s still a bit safer than being in the home. They have Covid safety plans in place so you don’t have to worry about air conditioning or ventilation turn over.

‘It’s those things that will help keep the pressure down on case numbers so it’s really something that’s in the hands of Sydneysiders now,’ Prof Bennett added. 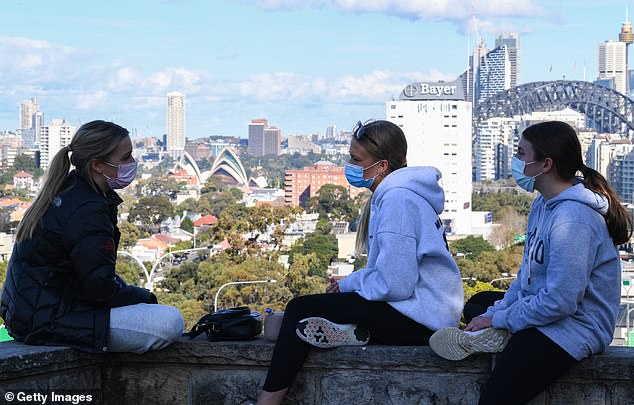 As of Monday 10 double-dosed visitors are now allowed in the home with 30 permitted to gather outdoors.

Ousted state leader Gladys Berejiklian’s original roadmap had previously set the cap at five indoors and 20 outside, however just 24 hours after being sworn into office Dominic Perrottet made the call to increase the capacity limits.

He also doubled the number of vaccinated guests permitted to attend weddings, funerals and religious services with 100 people able to take part in the ceremony, however they must remain seated when eating and drinking.

Face masks are no longer mandatory outdoors with the exception of front-of house hospitality workers.

Gyms, cafes, restaurants, pubs, bars, non-essential retail, libraries and churches can operate under the one person per 4sqm rule but nightclubs will remain closed.

Hairdressers and beauticians will also welcome back vaccinated clients but are restricted to a maximum of five in the premises at one time.

Indoor entertainment facilities such as cinemas, theatres, music halls, museums and galleries can reopen with one person per 4sqm or 75 per cent fixed seated capacity.

Double-jabbed residents will now be able to venture more than 5km from their home with Sydneysiders able to venture anywhere across the Harbour City and even as far as the Blue Mountains, Central Coast, or Shellharbour.

Those outside of Sydney are also free to move about but intrastate travel is still off the cards between regional areas and Sydney for roughly another two weeks.

Further restrictions will be eased later this month once NSW hits 80 per cent vaccination, before freedoms open up to the unvaccinated from December 1. 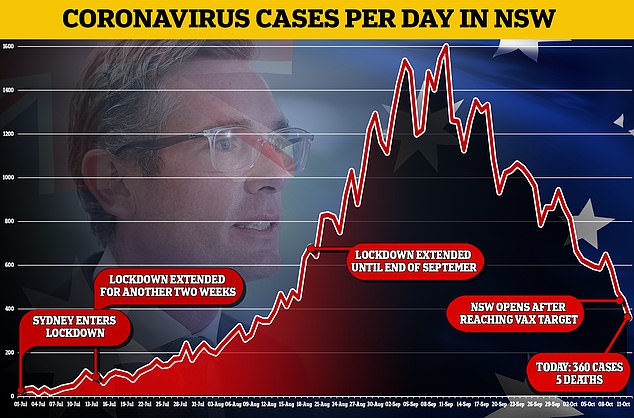