There is no doubt that the Civil Service and sclerotic government agencies which affect key areas of our everyday life are in desperate need of urgent, radical reform.

Their performance during lockdown was little better than atrocious. And with Covid restrictions lifted, it remains abject.

Seemingly institutional indolence at the DVLA has led to waits of up to three months for a driving licence, infuriating motorists and worsening HGV driver shortages.

Holidays are being ruined by long delays in sending out new passports. There are similar hold-ups in granting probate.

Boris Johnson has described their attitude as a ‘manana culture’ – never do today what you can put off until tomorrow.

So he is right to tackle this incalcitrance by ordering a ‘bonfire of bureaucrats’.

Such a philosophical attack is overdue. 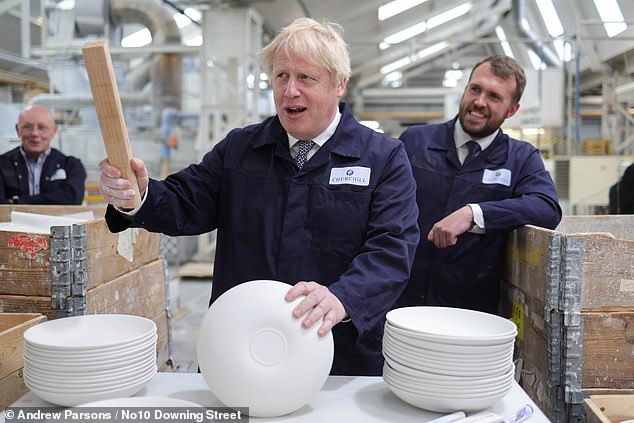 Boris Johnson has described the attitude of the Civil Service as a ‘manana culture’ and has ordered a ‘bonfire of bureaucrats’. Pictured is Mr Johnson at the Churchill China Factory in Stoke yesterday

The great blob of Left-wing, Remain obduracy at the heart of Whitehall tries to thwart or slow down every Conservative reform – from post-Brexit trade deals to the Rwanda immigration policy.

By slashing the size of the Civil Service by 91,000 – a fifth – and investing in new technology, the Prime Minister hopes to clear backlogs and free up billions of pounds to ease the cost of living crisis.

Yes, ministers will face intense opposition from Labour and the unions. But staff numbers will only return to 2016 levels.

Of course, even if successful, such reforms take time. With the living squeeze already hurting, time is a commodity families don’t have.

So, Mr Johnson has left the door open to a windfall tax on energy giants’ profits to help struggling households.

This paper believes firmly in the free market, but for years these corporations have fleeced their loyal customers.

So while we have reservations about a one-off grab, it is difficult in the face of such hardship to condemn it.

And given this would reduce the risk of a Labour government in 2024, the firms must know which side their bread’s buttered.

Long-term solutions are all well and good for tomorrow. But they won’t heat the house, pay the mortgage or feed the family today.

For years the Department for Transport and National Highways have been trying to tell us smart motorways were safe – safer even than traditional highways.

Common sense told us this couldn’t be so. Remove the hard shoulder and you remove the stranded motorist’s crucial last line of defence.

But no, they said. Research showed smart motorways led to fewer accidents and fatalities. 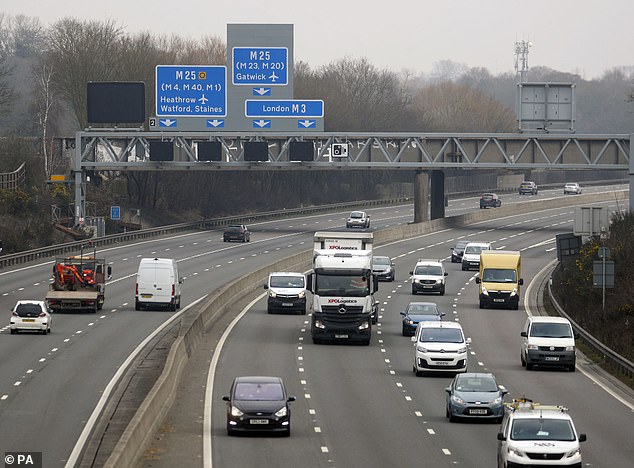 The Department for Transport and National Highways have been saying for years that smart motorways, like the M3 pictured here in Surrey, are safe

Today that myth is exploded.

A National Highways review, triggered by a damning Mail investigation, found that deaths and serious injuries were massively higher for broken-down drivers on smart motorways.

What more proof is needed that these death trap roads should be scrapped once and for all?

In his latest pathetic attempt to appear relevant, Sadiq Khan has set up a commission to look at decriminalising cannabis in the UK.

Rather than announce it here, the showboating London mayor jetted off at public expense for photo opportunities at a marijuana farm in Los Angeles.

Yet cannabis is inextricably linked to the gangs which bring violence to our streets. 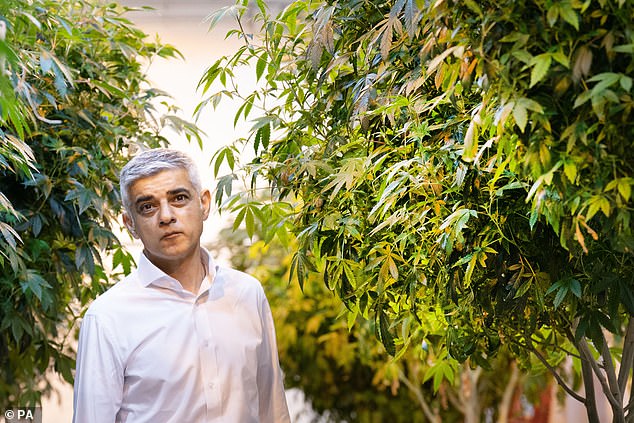 Sadiq Khan, the Mayor of London, visited a cannabis farm in Los Angeles as part of his tour of the US

And anyway, Mr Khan has no power to change the laws. Instead of engaging in expensive stunts, he should devote his energy to tackling the epidemic of drug and knife crime in the capital.

Less fun than a Californian jaunt, but far more important to those who pay his wages.

Louisiana boy, 12, shoots and kills armed burglar who broke into his home and threatened his mother