Shocking footage has emerged of a toddler running onto a busy road during peak hour traffic after escaping from a nearby house.

Drivers travelling along King Georges Road, in the western Sydney suburb of Wiley Park, were left horrified on Tuesday afternoon when a little boy ran out into traffic.

Dash camera video showed the boy darting from the side of the road towards the median strip. 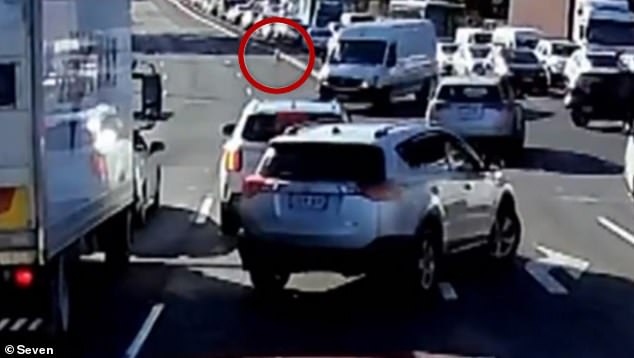 Shocking footage emerged of a toddler running across King Georges Road, in Wiley Park, during peak hour traffic on Tuesday

As cars began to turn left onto the road, a hero driver leapt out of his vehicle and quickly scooped the toddler up.

‘Every car was in shock, [thinking] like “what should we do?”‘,’ one driver told 7News.

‘I felt stressed. I don’t have kids, but it’s something you don’t see everyday.’

The little boy had slipped away from a nearby home without his parents noticing after crawling through a gap in a fence.

His mother told the publication she only looked away for a ‘moment’.

Fortunately, oncoming traffic was halted by a red traffic light at the time the boy made the dash.

It is not the first time a toddler has been filmed being rescued on a busy road after wandering off from family.

A little boy made headlines in May last year after he was plucked out of the path of a vehicle just in time in Panania, in Sydney’s southwest. 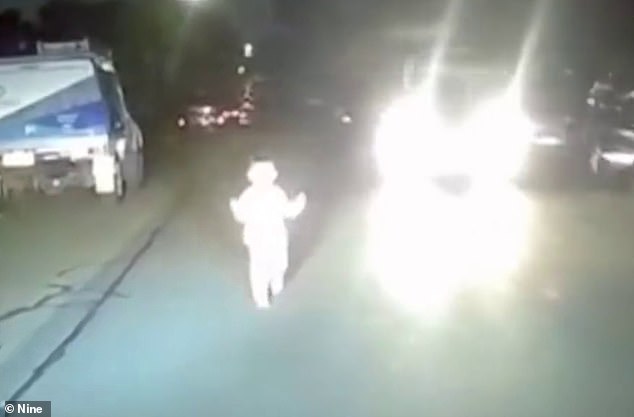 In May last year, terrifying dash cam footage captured a toddler rushing towards a moving vehicle in Panania, south-west Sydney

Women aged 40 to 60 should ALL be given weight loss counselling, Federal-funded health group says