The number of deaths from massive flooding in Kentucky climbed to 26 on Sunday and several dozen people remained missing amid a renewed threat of more heavy rain.

Kentucky Gov. Andy Beshear said on NBC’s ‘Meet The Press’ that the death toll had risen by one since Saturday from last week’s storms, and predicted the count would continue to rise in the coming weeks.

‘This is one of the most devastating, deadly floods that we have seen in our history,’ he said, ‘With the level of water, we’re going to be finding bodies for weeks, many of them swept hundreds of yards, maybe a quarter-mile-plus from where they were lost.’

As many as 37 people remain unaccounted for, according to a daily briefing from the Federal Emergency Management Agency.

On top of that, more flash flooding was possible in portions of Appalachia on Sunday and Monday as the latest storms roll through, the National Weather Service said. Rainfall rates of 1 to 2 inches per hour were possible in some of the same areas that were inundated last week.

A dozen shelters were open for flood victims in Kentucky with 388 occupants on Sunday, according to FEMA. 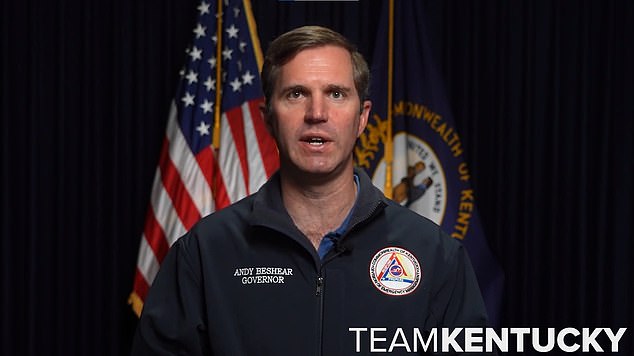 Kentucky Gov. Andy Beshear released a video statement on Sunday in which he said more bodies had been recovered but that their deaths could not yet been confirmed as being in relation to the flooding 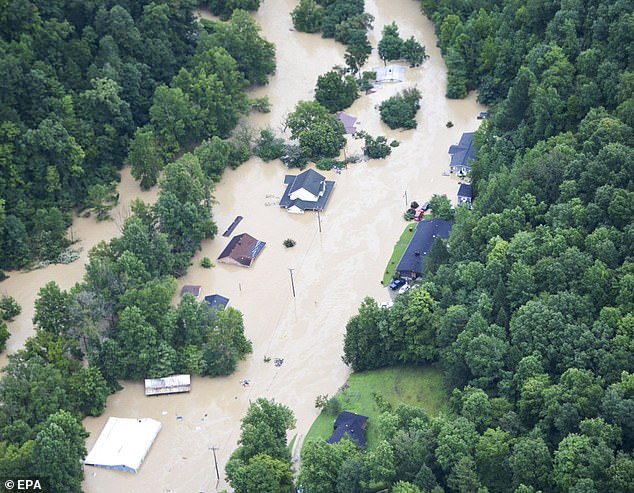 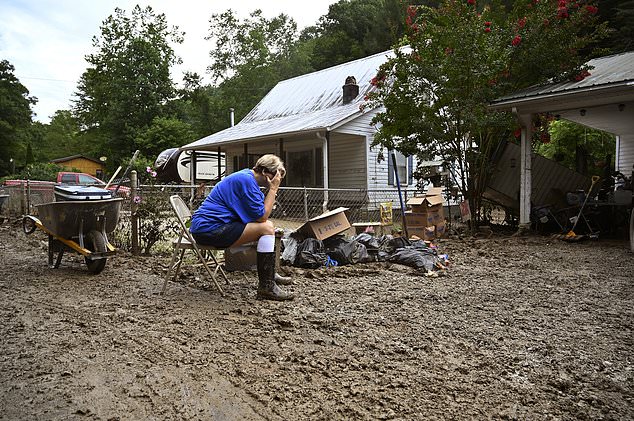 Teresa Reynolds sits exhausted as members of her community clean the debris from her flood ravaged homes at Ogden Hollar in Hindman, Kentucky, Saturday, July 30, 2022

‘We still can’t get into some areas to check on people,’ Beshear said, ‘We’re doubling our National Guard. We’re going to work to go door to door, work to find, again, as many people as we can. We’re even going to work through the rain. But the weather is complicating it.’

The governor also released a video statement on Sunday in which he said more bodies had been recovered but that their deaths had not yet been confirmed as being caused by the flooding.

‘We do know of additional bodies that have been recovered, but cannot confirm those deaths at this time,’ he said.

He also gave an update on recovery efforts, announcing that trailers had arrived in the state over the weekend to provide housing for displaced residents.

Warning about upcoming rains, he pleaded with residents to remain vigilant about their safety and said emergency agencies would remain on hand to provide assistance.

‘We’re gonna be there for you today, tomorrow, next week, next year. We’re not going anywhere. We are going to help you rebuild’ he said. 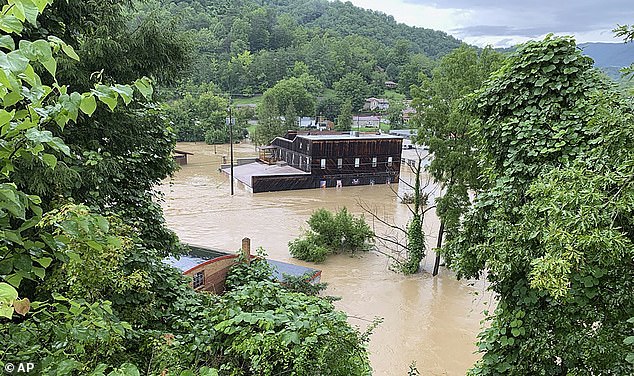 Floodwaters overwhelming buildings in Whitesburg, Kentucky, known as a center for Appalachian culture 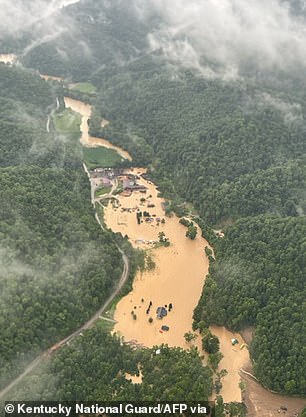 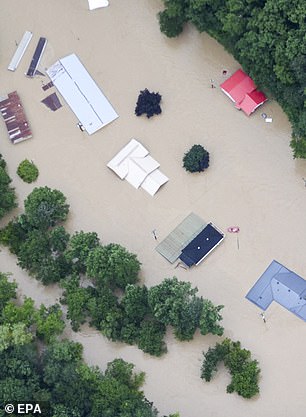 On an overcast morning in downtown Hindman, about 200 miles southeast of Louisville, a crew cleared debris piled along storefronts. Nearby, a vehicle was perched upside down in Troublesome Creek, now back within its debris-littered banks.

With the threat of more rain, workers toiled nonstop through mud-caked sidewalks and roads.

‘We’re going to be here unless there’s a deluge,’ said Tom Jackson, who is among the workers.

Jackson was with a crew from Corbin, Kentucky, where he’s the city’s recycling director, about a two-hour drive from Hindman.

His crew worked all day Saturday, and the mud and debris were so thick that they managed to clear one-eighth of a mile of roadway. The water had rushed off the hillsides had so much force that it bent road signs. 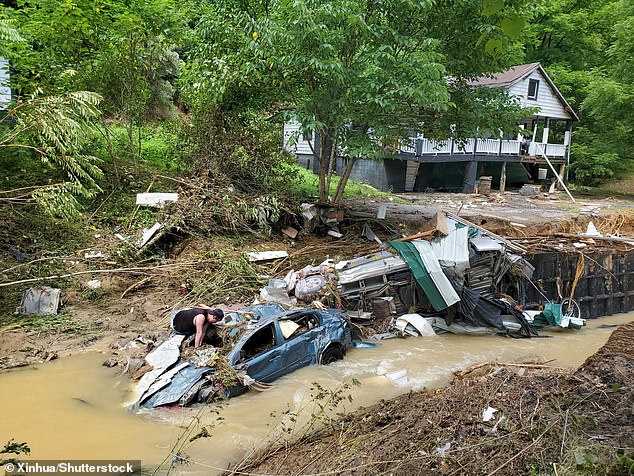 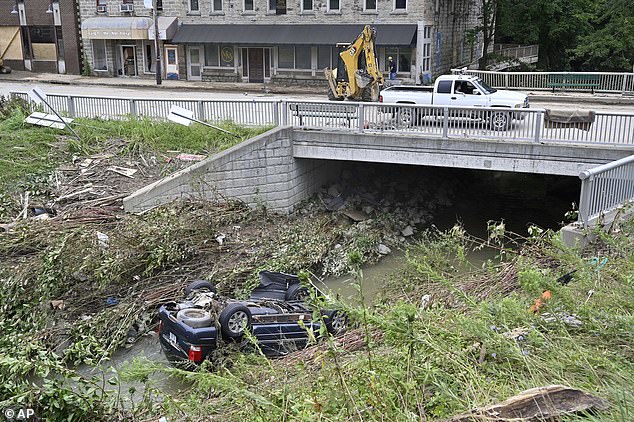 A car overturned in Troublesome creek in Hindman, Kentucky, where floodwaters have caused devastation 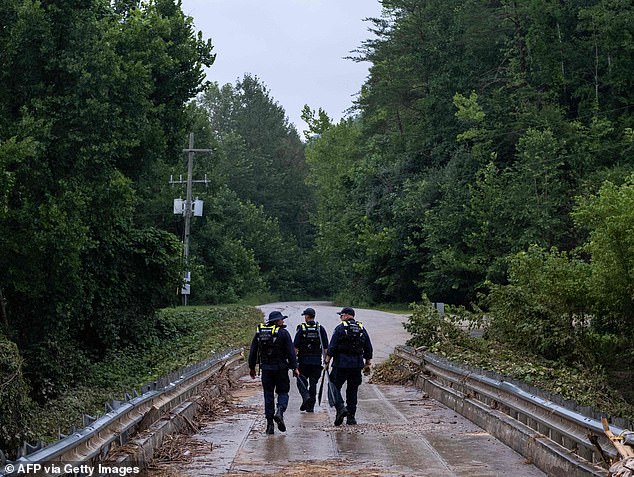 A search and rescue team in Jackson County, Kentucky, look for victims and survivors of the region’s flooding

In Knott County, Teresa Perry Reynolds´ home was inundated with water and mud. She and her husband would have taken refuge in their 44-foot travel trailer, but it was swamped by the floodwater.

‘I have the clothes on my back,’ she said Saturday when asked what they could salvage.

They found her husband’s wallet after searching a day and a half. It was left behind as they escaped the fast-rising water Thursday and went to a neighbor’s house. A team of volunteers hauled debris out of her house Saturday.

‘All I know is I’m homeless and I’ve got people taking care of me,’ she said. 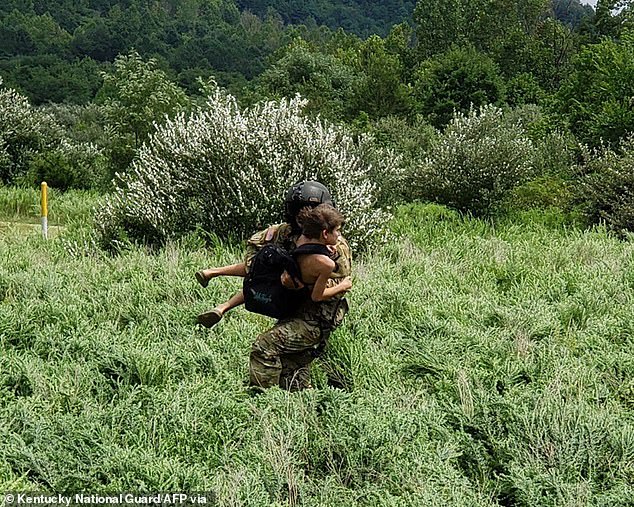 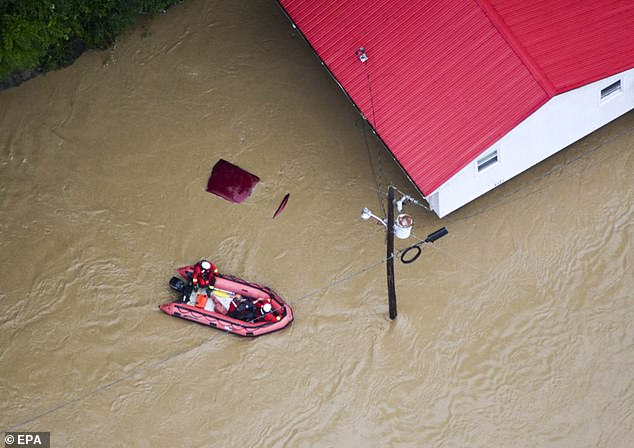 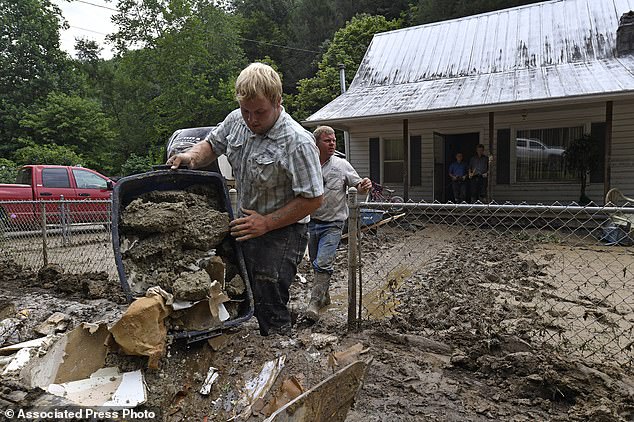 Volunteers from the local mennonite community clean flood damaged property from a house at Ogden Hollar in Hindman, Kentucky, on Saturday, July 30

The rain let up early Friday after parts of eastern Kentucky received between 8 and 10 1/2 inches over 48 hours. About 13,000 utility customers in Kentucky remained without power Sunday, poweroutage.us reported.

'The referee has been terrible' : Ian Wright bemoans refereeing in Euro 2022 final

Toddler ripped from her mother’s arms, punched and nearly stomped on by another woman at Easter Show