The assistant speaker of the House is proposing a radical new way of protecting members from COVID-19: Forcing unmasked lawmakers to sit in a plexiglass ‘isolation box.’

Democratic Rep. Katherine Clark suggested the measure because fines have not stopped some members flouting the rules.

It recently emerged that Republican Reps. Marjorie Taylor Greene and Andrew Clyde had racked up fines of more than $100,000 for repeated offenses.

‘This callous disregard for House rules endangers the health of members of Congress and the professional staff whose physical presence is required to ensure continuity of government,’ the assistant speaker wrote in a letter to House Sergeant at Arms William Walker.

‘This has only become more urgent with the emergence of the highly infectious Omicron variant and what the Attending Physician describes as an ‘unprecedented number of cases in the Capitol community.’

The fines currently stand at $500 for a first offense, and $2500 for subsequent infringements, yet they have not stopped far right figures from appearing without masks. 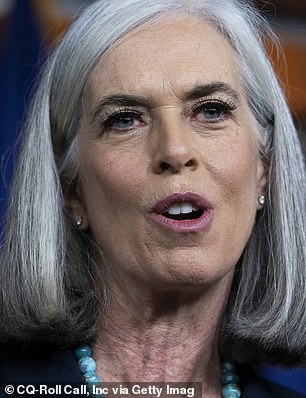 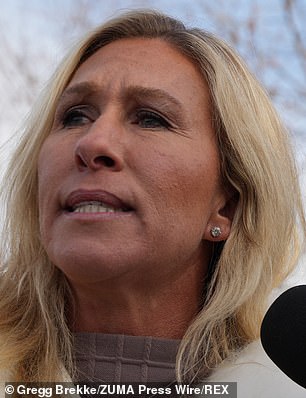 Rep. Katherine Clark, the assistant speaker, wrote to the Sergeant at Arms requesting that unmasked members use plexiglass ‘isolation boxes. Marjorie Taylor Greene is among those who have repeatedly flouted mask mandates in the chamber 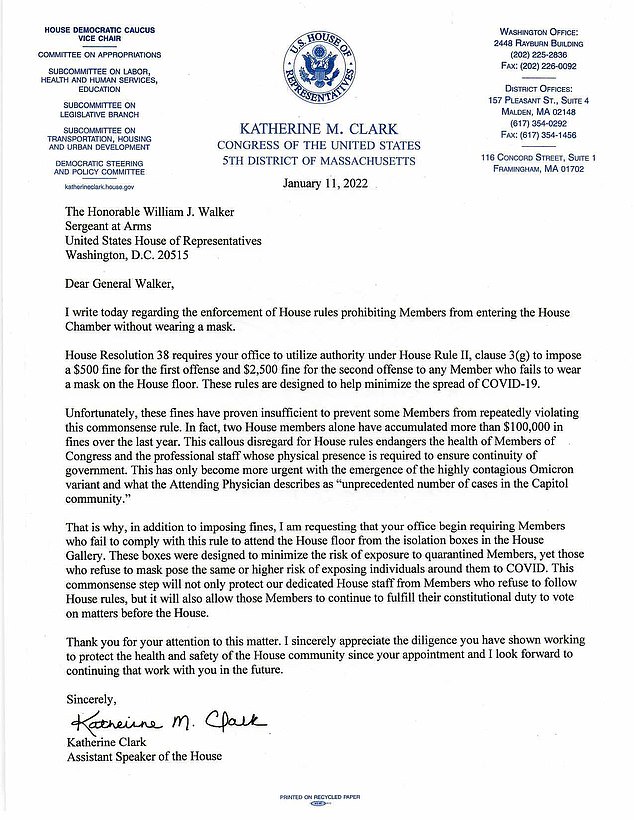 In her letter, Clark says fines of $2500 are not having an effect on some members

‘That is why, in addition to imposing fines, I am requesting that your office begin requiring members who fail to comply with this rule to attend the House floor from the isolation boxes in the House gallery,’ wrote the fourth most senior Democrat in the House.

‘This commonsense step will not only protect our dedicated House staff from members who refuse to follow House rules, but it will also allow those members to continue to fulfill their constitutional duty to vote on matters before the House.’

Plexiglass was installed in the gallery of the chamber last January to offer ‘isolation boxes’ for members who were quarantining and needed to be present to elect the speaker.

Greene has been unapologetic about her stance. She has said she is unvaccinated and dismissed the mask requirement as ‘communist.’

‘The American people have had enough and are standing up against these outrageous and unconstitutional policies,’ she said recently.

On Tuesday, Sen. Ted Cruz slammed a lectern in fury on Tuesday as he accused the Biden administration of hypocrisy on COVID policy and railed against a ‘one-sided media’ for only asking Republicans why they weren’t wearing masks on Tuesday.

During a Republican press conference to discuss President Joe Biden’s voter rights push, he was asked why he and his colleagues weren’t wearing masks.

He said everyone appearing with him had been double vaccinated and boosted.

‘And by the way, on the question of hypocrisy, you just asked, you people at the podium are speaking without masks.

‘Just once, I’d like to see a reporter say to Joe Biden when he stands at the damn podium in the White House without a mask, “Mr. President, why aren’t you wearing a mask?” he said, slamming the lectern with a fist to punctuate his remarks.

‘Just once, I’d like to see you say to Jen Psaki, the White House press secretary, when she stands at the podium with no mask, “Ms. Psaki, why don’t you have a mask?’

‘The questions are only directed at one side, and I got to say that the American people see the hypocrisy.’

He was responding to a question in which a reporter referred to the ‘glaring visual’ of a line of GOP senators standing before the media without masks.

Last week, the Attending Physician of the U.S. Congress advised staff to stay home as the highly infectious Omicron spread through members and their offices.

And Cruz made his comments a day after four lawmakers announced they had caught COVID-19, adding to four more – including Rep. Alexandria Ocasio-Cortez – who announced positive tests over the weekend.

AOC has attracted particular anger after photographs of her emerged showing her maskless in Florida, which has been the target of liberals’ anger for its relaxed response to COVID-18.

At the same time, House officials say they have struggled to enforce the rules.

Walker appeared before lawmakers on Tuesday and admitted that his staff had found it difficult to police the mask mandate.

‘I see people — members, staff — without masks, and I’ll walk up to them and I’ll ask them to put the mask on,’ he said.

‘And some just walk away from me. Some put it on.’